Though little known in the U.S. today except by movie buffs, Thorold Dickinson is an important figure in the development of the British film industry. A screenwriter, editor, director and producer, Dickinson wore many hats and exerted considerable influence in his various positions over the years as Coordinator of the Army Kinematograph Service’s film unit, Professor of Film at the Slade School of Fine Art and Chief of Film Services at UNESCO (United Nations Educational, Scientific and Cultural Organization). In addition to collaborating with other British filmmakers on their work and co-directing several features, he rose to prominence on the basis of a small but impressive filmography. Among them were the commercial hits, Gaslight (1940), remade in 1944 in Hollywood with Ingrid Bergman and Charles Boyer, and The Queen of Spades (1949), an adaptation of the Alexander Pushkin short story which is considered possibly the best of its many film versions. His skill as a documentarian was equally renowned and The Next of Kin, a military training film he made for the War Office in 1940, was so effective it was given a theatrical release. Men of Two Worlds (1946), a semi-documentary collaboration between the Ministry of Information and the Colonial Office, was co-scripted with novelist Joyce Cary (The Horse’s Mouth, 1958) and focused on the problem and treatment of sleeping sickness in African tribes. Yet, the most ambitious film of Dickinson’s career – and the one that almost ended it was Secret People (1952), which was an examination of the terrorist mindset and years ahead of its time.

END_OF_DOCUMENT_TOKEN_TO_BE_REPLACED

It is not that common to encounter films from Egypt in the U.S. and only a handful have managed to enjoy theatrical distribution here in either film festival or art house screenings over the years. Youssef Chahine from Alexandria, Egypt is probably the best known director with more than 40 feature films to his credit including The Blazing Sun (1954) featuring Omar Sharif in his film debut and Bab el Hadid (Cairo Station, 1958), which brought him international attention. Other than Chahine, you might recognize Moshi Mizrahi although his best-known films were made in other countries; The House on Chelouche Street (1973), an Oscar nominee for Best Foreign Language Film was made in Israel, and Madame Rosa (1977) and I Sent a Letter to My Love (1980), both starring Simone Signoret, were filmed in France. A more contemporary Egyptian director is Atom Egoyan, although he was raised in Western Canada where most of his movies have been made including Exotica (1994) and The Sweet Hereafter (1997).

Many film historians and critics, however, often list Chadi Abdel Salam as one of the greatest Egyptian directors of all time on the basis of his solo feature film from 1969, Al-mummia (The Mummy aka The Night of Counting the Years), which has slowly acquired the status of a classic in its own country and around the world, thanks to the efforts of Martin Scorsese and The Film Foundation, which restored the film in 2009 in association with the Cineteca di Bologna and the Egyptian Film Center.

END_OF_DOCUMENT_TOKEN_TO_BE_REPLACED

“Fellini’s work is like a treasure chest. You open it up and there, right in front of your eyes, a world of wonders springs up – ancient wonders, new ones, provincial wonders and universal ones, real wonders and fantastic ones.” – Martin Scorsese

The Oscar nominated director of Raging Bull (1980) and Goodfellas (1990) is just one of the usual suspects (along with Woody Allen and Paul Mazursky) rounded up to pay homage to the great Italian director in The Magic of Fellini (2002), a 56-minute documentary written and directed by Carmen Piccini.

END_OF_DOCUMENT_TOKEN_TO_BE_REPLACED

Director John Cassavetes broke all the rules, inventing his own and then discarding them as he went along. He improvised and experimented with everything from the cinematography to the performances to the actual financing of the film. He even mortgaged his own home numerous times to subsidize his movies over the years and took on acting jobs purely for monetary reasons. His directorial debut Shadows (1958), with its jerky, hand-held camerawork, vivid location shooting on New York City streets and edgy subject matter involving an interracial romance, is one of the most influential films to emerge from the independent New York City cinema movement of the 1950s. Yet, it was just a warm-up for Cassavetes’s next film, Faces (1968), which was even more provocative and unconventional.

END_OF_DOCUMENT_TOKEN_TO_BE_REPLACED

Irving who? The name may not be familiar to you but if you are a film noir fan, you might know the titles Murder by Contract (1958) and City of Fear (1959), two low-budget crime dramas, both of which star Vince Edwards. These were the third and fourth films in the filmography of Irving Lerner and the more famous of the two is Murder by Contract, which has often been championed by Martin Scorsese over the years. In recent years it has enjoyed wider exposure due to its release on DVD as well as retrospective screenings at events like the Noir City Film Festival, hosted by film noir expert Eddie Muller.  Murder by Contract is a tautly directed minor masterpiece with an exceptionally chilling performance by Edwards. He plays Claude, a coldly efficient hit man who likes to make a nice clean kill with no mess, no slip-ups, and no surprises due to poor planning – “I wasn’t born this way. I trained myself! I eliminated all personal feeling.”

END_OF_DOCUMENT_TOKEN_TO_BE_REPLACED

During his lifetime, Elvis Presley made 31 feature films, two theatrical documentaries and numerous TV specials. What is rather surprising is the fact that Hollywood never showcased Elvis as a live performer or in a concert film until the end of his career. How much of that was due to his manager, Colonel Tom Parker, is debatable but Elvis on Tour (1972) is regarded as the last official Elvis movie that was distributed to theaters.

END_OF_DOCUMENT_TOKEN_TO_BE_REPLACED 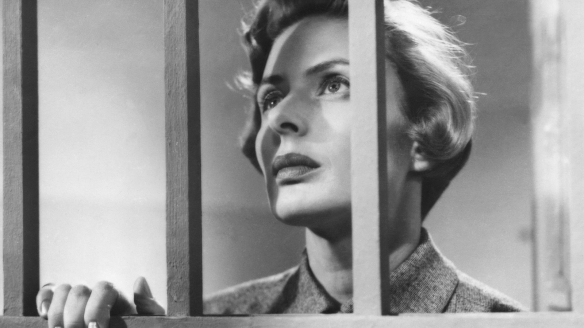 The second film collaboration between Ingrid Bergman and Roberto Rossellini, Europe ’51 (1952) might be the most overlooked and misunderstood feature of the famous director-actress team during their turbulent and controversial relationship. Between 1950 and 1955, the couple made five features together and one episode for the five chapter compilation film, We, the Women (1953). Although most film critics seem to regard 1954’s Journey to Italy as their peak achievement, Europe ’51 (aka Europa ’51) received a second chance at reappraisal in September 2013, thanks to The Criterion Collection, which released the film on Blu-Ray and DVD in a set with Stromboli (the first Bergman-Rossellini film from 1950) and Journey to Italy (aka Viaggio in Italia, 1953) .     END_OF_DOCUMENT_TOKEN_TO_BE_REPLACED