“See cities reduced to ashes! See oceans turned to steam! See mountains turned to molten lava! See interceptor jets and anti-missiles melted in mid-air before your eyes!” These are all taglines from the original poster for The Lost Missile (1958), a relatively obscure sci-fi thriller from the fifties which features Robert Loggia in a rare early starring role.

END_OF_DOCUMENT_TOKEN_TO_BE_REPLACED 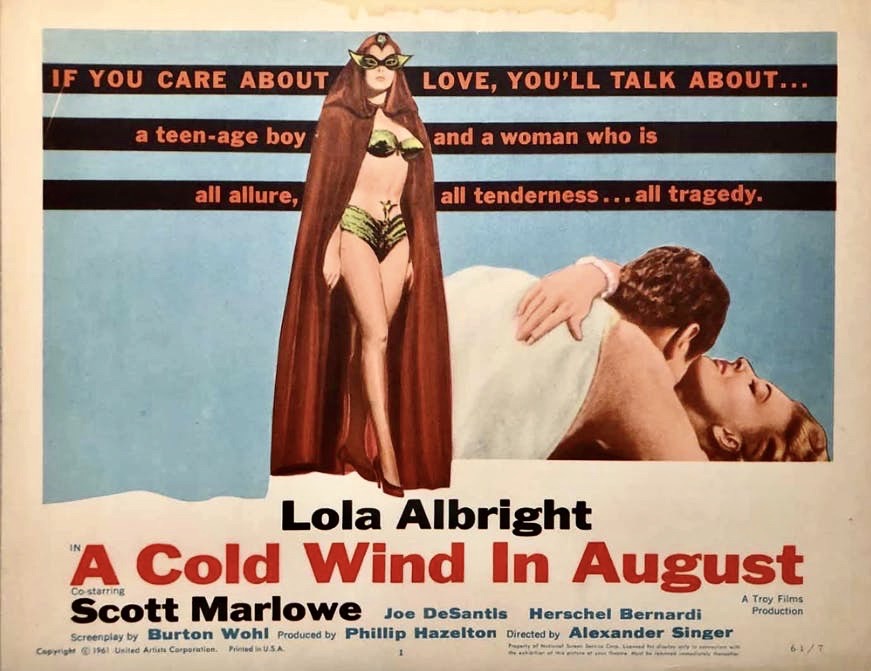 Every once in a while a low-budget independent film with a no-name cast will come along and captivate critics and audiences alike with its audaciousness, honesty and ability to transcend easy categorization. In the film industry, they sometimes call this a “sleeper” and, while this kind of movie rarely becomes a box office hit, it can acquire a cult status or insider buzz that saves it from falling off the radar and vanishing into obscurity. Such is the case with A Cold Wind in August (1961), a steamy little adult drama that was targeted for grindhouses and the drive-in trade with the tagline: “If you care about love, you’ll talk about a teenage boy and a woman who is all allure, all tenderness…all tragedy.” The poster depicted two lovers in a torrid horizontal embrace while the figure of an exotic stripper, dressed in an open cape and eye mask, towers over them, revealing her shapely, half-naked body.
END_OF_DOCUMENT_TOKEN_TO_BE_REPLACED