Every once in a while a low-budget independent film with a no-name cast will come along and captivate critics and audiences alike with its audaciousness, honesty and ability to transcend easy categorization. In the film industry, they sometimes call this a “sleeper” and, while this kind of movie rarely becomes a box office hit, it can acquire a cult status or insider buzz that saves it from falling off the radar and vanishing into obscurity. Such is the case with A Cold Wind in August (1961), a steamy little adult drama that was targeted for grindhouses and the drive-in trade with the tagline: “If you care about love, you’ll talk about a teenage boy and a woman who is all allure, all tenderness…all tragedy.” The poster depicted two lovers in a torrid horizontal embrace while the figure of an exotic stripper, dressed in an open cape and eye mask, towers over them, revealing her shapely, half-naked body.

Scott Marlowe and Lola Albright star in the 1961 drama A Cold Wind in August, directed by Alexander Singer.

On the surface, A Cold Wind in August was clearly promoted as an exploitation film and the film, a directorial debut for Alexander Singer, is a slightly sordid melodrama about a short, intense affair between a teenage boy and an older woman, who hides her professional occupation from him; she’s a stripper but he thinks she’s a model. 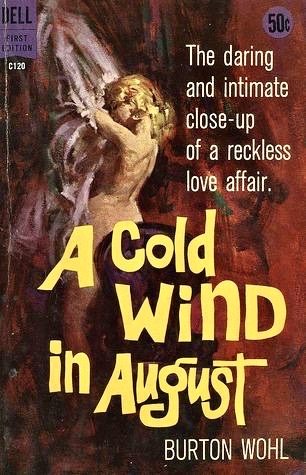 A Cold Wind in August is based on the novel by Burton Wohl who adapted it for the screen with John Hayes. Most of the film takes place in a low-rent apartment house in an economically depressed New York neighborhood where Vito (Scott Marlowe), the super’s son, is the all-round handyman and Iris (Lola Albright) is a resident who needs someone to fix her broken air-conditioner. The sweltering heat of an August in New York City is visually conveyed through the sweating bodies, table fans, and underpopulated streets that are juxtaposed against the type of heat generated between Vito and his seductive neighbor once they meet.

What starts out as a casual fling for Iris turns into a passionate, all-consuming sexual awakening for the older woman who tries to resist her growing obsession over this receptive but naive young boy. While the lovers’ various couplings are tame by today’s standards and offer no nudity, there is a frank, raw quality to the dialogue and performances that captures the film’s primary focus – carnal desire and how it can consume you.

Lola Albright plays an exotic stripper in A Cold Wind in August (1961), directed by Alexander Singer.

One thing is fairly obvious; the movie would have been much less memorable without Lola Albright as the man-hungry Iris. In some ways, the film might be her finest showcase as a dramatic actress (as well as a rare leading role); she never became a major star and is not well known today except for baby boomers who remember her from the cult TV series Peter Gunn (1958-1961) and those cinephiles who saw her vivid supporting turns in such movies as Champion (1949), Joy House (1964) and Lord Love a Duck (1966). Yet, her performance in A Cold Wind in August was singled out by many critics of its day and should have led to better roles and opportunities. It didn’t, but this film is worth seeing for her alone.

The supporting cast of A Cold Wind in August is also better than you’d expect with Herschel Bernardi and Joe De Santis contributing strong performances respectively as Iris’s lonely, longtime suitor and Vito’s father and moral conscience. Scott Marlowe as the object of Iris’s obsession drew mixed reviews though some critics felt he was ideally cast; others found his Method Actor tics annoying and he seems much too old and experienced to be playing a seventeen-year-old.

An example of some of the atmospheric and innovative cinematography of Floyd Crosby in A Cold Wind in August (1961).

Other factors that contribute to the film’s slice-of-life realism is Floyd Crosby’s crisp black and white cinematography and Gerald Fried’s dramatic jazz score which accents the often tawdry atmosphere, particularly in a show-stopping sequence where Vito discovers Iris’s true identity at a strip club with his pals.

Vito (Scott Marlowe) discovers the not so secret occupation of Iris (Lola Albright) in A Cold Wind in August (1961).

While few would mistake A Cold Wind in August for a masterpiece, it certainly defied the expectations of the typical exploitation film upon its release as some of the following critical comments reveal. The N.Y. Herald Tribune said, “It is, in essence, gold, even raw, and may be dismissed by many as lurid trash. But there is much to commend this oddly compelling independent production, not the least of which is a striking performance by Lola Albright.” 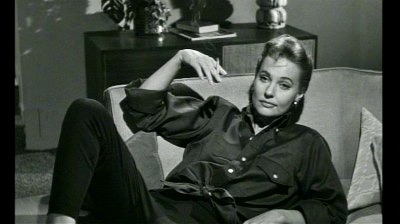 Lola Albright in one of her most memorable performances in A Cold Wind in August (1961).

Arthur Knight, in his review for Saturday Review, wrote, “Alexander Singer…has brought to A Cold Wind in August a great deal that money can’t buy: perception, a feeling for character, and a taste for life.” Variety also praised Singer’s direction, saying, “He has endowed his picture with a blunt and powerful realism…There is a strip scene that rivals in sensuality any strip scene ever put on non-stage celluloid, not so much in what is revealed of the female anatomy but in how it is revealed – darting images of undulating sections of Miss Albright’s partially exposed and admirable epidermis formation.”

There were some negative responses as well such as The New York Times which said, “Granting the noble intentions of the producers, it seems a fairly safe guess that they have confused art with blatant sex, which may be good business but hardly a new cultural approach.” Time magazine was equally unimpressed, stating “A Cold Wind in August is a nutty melodrama [that] does not merely invite cynicism, it drags cynicism in off the streets and loosens its tie.”

Lola Albright and Scott Marlowe star in the underrated indie film A Cold Wind in August (1961), directed by Alexander Singer.

Pauline Kael’s review of A Cold Wind in August, however, is probably the most succinct assessment of this little film, warts and all: “When people who work in the movie industry get together, they often talk about the little offbeat pictures – the ones that encourage them to think that maybe something can be done now and then. One of the movies that almost inevitably comes up for discussion is the 1961 A Cold Wind in August. This low-budget, extremely “commercial” movie is a shrewdly conceived and well-acted piece of what might be called tawdry but frank eroticism…Unquestionably the movie was made as an exploitation film, as an American ersatz version of Radiguet’s Devil in the Flesh and Colette’s The Game of Love, but it does not pretend to be set on a high plane, and is saved by the honesty and clarity of its low intentions.”

Iris (Lola Albright) moonlights as an exotic stripper in A Cold Wind in August (1961).

Rarely screened today, A Cold Wind in August still enjoys a fervent following; among them are critic Danny Peary, author of Cult Movies and director John Waters, who ranks it as one of his favorite movies. 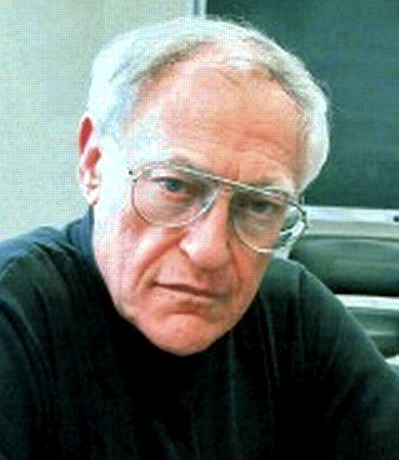 Alexander Singer is better known as a television director than a filmmaker and some of his TV credits include Star Trek: Voyager and Lou Grant.

Alexander Singer is not well known as a director today but he started out as an assistant director/cinematographer to Stanley Kubrick on his 1951 short film Day of the Fight and later served as a producer on The Killing. Singer may have started out as a feature film director – A Cold Wind in August was his debut – but he quickly became an in-demand television director amassing more than 75 credits for such popular series as The Fugitive, Run for Your Life, The Monkees, Lou Grant and several Star Trek spinoffs such as Star Trek: Voyager. In comparison, his filmography is sparse and unimpressive. Psyche 59 (1964), a psychological drama starring Patricia Neal and Love Has Many Faces (1965), a Lana Turner soap opera, are probably his best known features.

A Cold War in August was released as a limited edition DVD-R by MGM/UA in March 2011 and that is still the only available format for the film which is certainly overdue for a Blu-Ray upgrade.