Remember Big Jim McBob (Joe Flaherty) and Billy Sol Hurok (John Candy) as the hayseed hosts of “Farm Report” on the legendary SCTV comedy series? These farmer-turned-film-reviewers loved movies where people and things blew up and eventually their hog report turned into a talk show where they blew up famous celebrities every week like Meryl Streep, The Village People, Brooke Shields, singer Neil Sedaka or Dustin Hoffman as Tootsie. Well, these guys would love Rod Steiger in Hennessy (1975) because he blows up real good!

END_OF_DOCUMENT_TOKEN_TO_BE_REPLACED 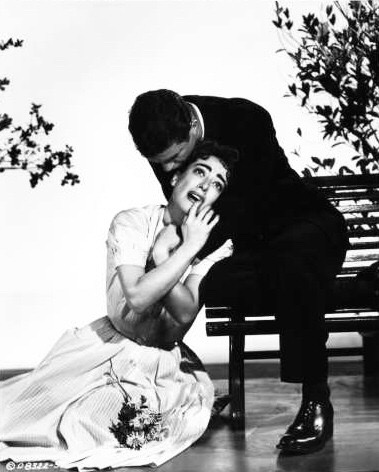 Joan Crawford and Cliff Robertson have a traumatic love affair in Autumn Leaves (1956).

In 1956 directed Robert Aldrich surprised everyone by trying his hand at a “woman’s picture,” a melodramatic soap opera that on the surface appeared to be a complete departure from his previous work which included two westerns (Apache, Vera Cruz), a film noir (Kiss Me Deadly) and a drama (The Big Knife), whose emotional volatility equals the physical violence in the three preceding films.  END_OF_DOCUMENT_TOKEN_TO_BE_REPLACED