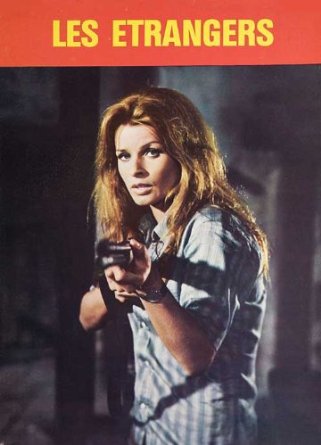 It’s a rare thing when a crime thriller departs from the usual formulaic expectations and rewards the viewer with a much more unpredictable and entertaining twist on a familiar genre. Such is the case with Les étrangers (aka The Strangers, 1969), which begins with a carefully planned diamond heist in a remote desert town that goes spectacularly awry before transitioning into a deadly game of cat and mouse between a fleeing fugitive and a couple that offer him temporary shelter. This is a superior B-movie that feels like an A-picture with its iconic international cast of actors from France (Michel Constantin), Austria (Senta Berger), Spain (Julián Mateos) and South Africa (Hans Meyer), a spaghetti western-flavored score by Michel Magne and Francoise de Roubaix, and atmospheric cinematography by Marcel Grignon, who received an Oscar nomination for Is Paris Burning? (1967) and filmed such cult favorites as Roger Vadim’s Vice and Virtue (1963) and Walerian Borowczyk’s The Beast (1975).     END_OF_DOCUMENT_TOKEN_TO_BE_REPLACED