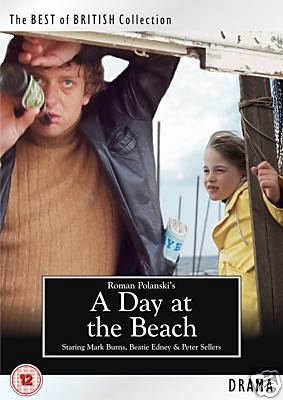 The headline is referencing the past, not the present, for A DAY AT THE BEACH, a film that Roman Polanski scripted and co-produced with his partner Gene Gutowski for their short-lived production company, Cadre Films, in 1969 finally surfaced on DVD in 2007 via Odeon Entertainment’s “The Best of British Collection” series in the U.K. and then in the U.S. in 2008, courtesy of Code Red, which specializes in re-releasing cult and lesser known genre films like Rituals (1977) and Group Marriage (1973).  For more than thirty five years, the film was considered lost after being shelved by Paramount following an unsuccessful limited release in Europe. But a serviceable print was discovered and preserved and any self-professed fan of Polanski’s films will want to check it out if they haven’t already.  It may not be “the lost Roman Polanski masterpiece” that the Code Red DVD cover promises but it is much more than a curiosity piece and quite compelling if you are in the mood for a bitter, bleak and harrowing character study.    END_OF_DOCUMENT_TOKEN_TO_BE_REPLACED