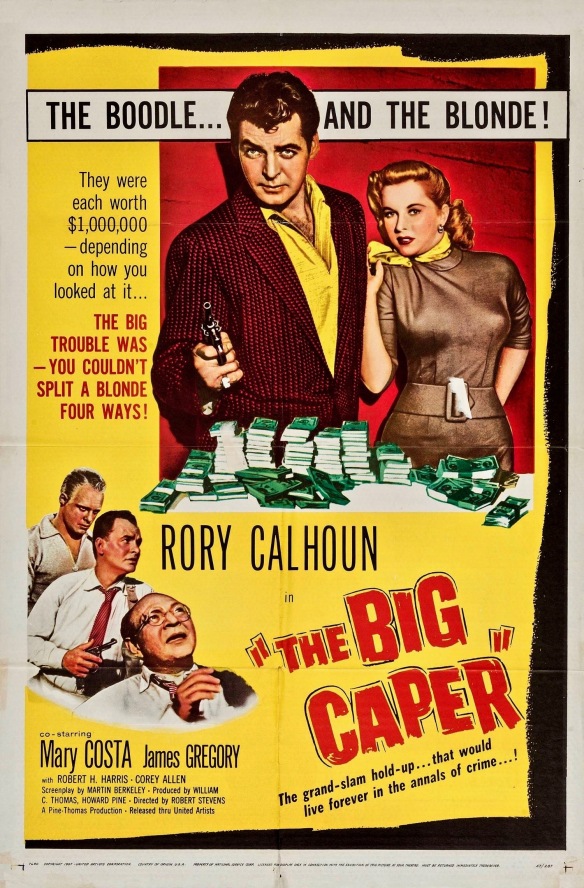 On first impressions The Big Caper (1957) may look like just another grade B bank heist thriller but don’t be fooled. This 1957 independent pickup by United Artists is a genuine loose canon and highly peculiar within its own specialized genre. In the best heist thrillers (Rififi, The Asphalt Jungle), the robbery is usually ingeniously planned and executed but when it goes awry, it’s usually due to festering hatred among the instigators (Odds Against Tomorrow) or bad luck (Plunder Road). In The Big Caper, the glaring flaw is the organizer who appears to be a shrewd and cautious businessman until you see the wacko team he assembles for the job. And he might be the biggest nutcase in the lot. It’s not a comedy, but it should be, and you may very well find yourself laughing uncontrollably at times.   END_OF_DOCUMENT_TOKEN_TO_BE_REPLACED

Sometimes a great promotional gimmick is reason enough to make a movie and this certainly proved to be a successful strategy for director William Castle who made box office hits out of low-budget horror thrillers such as Macabre (1958, admission included an insurance policy from Lloyds of London against death by fright), House on Haunted Hill (1959, a glow-in-the-dark skeleton swooped over the audience at a key point in the movie) and The Tingler (1959, selected seats were wired and vibrated when the title creature got loose in a movie theatre). Not all promoters have been as lucky as Castle though and Wicked, Wicked (1973), produced by William T. Orr and writer/director Richard L. Bare, features one of the best movie gimmicks of its era but was poorly distributed and has languished in obscurity for years…until the Warner Archive Collection released it on DVD in November 2014.  END_OF_DOCUMENT_TOKEN_TO_BE_REPLACED