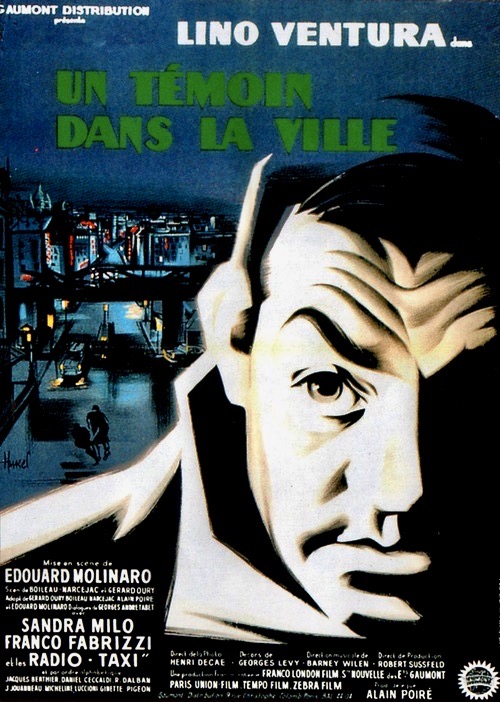 French director/screenwriter Edouard Molinaro may not be a household name in America but practically everyone knows his international breakout hit, La Cage aux Folles, from 1978.  It spawned an equally successful sequel, La Cage aux Folles II (1980), but also became the basis for the smash Broadway musical La Cage aux Folles in 1984 and eventually was remade by director Mike Nichols as The Birdcage in 1996 with Robin Williams, Nathan Lane, Gene Hackman and Dianne Wiest. La Cage aux Folles was no fluke success and Molinaro was already renowned in France for his film comedies such as Male Hunt (1964) with Jean-Paul Belmondo, Oscar (1967) featuring Louis de Funes and the black farce A Pain in the…(1973), which was remade by Billy Wilder as Buddy Buddy (1981). None of this would lead you to believe that Molinaro launched his feature film career with several film noir-influenced thrillers and Un temoin dans la ville (English title: Witness in the City, 1959) is a near masterpiece, deserving to stand alongside Louis Malle’s Elevator to the Gallows (1958), Claude Sautet’s Classe Tous Risques (1960) and Jean-Pierre Melville’s Le Doulos (1962).

Witness in the City opens with a cold-blooded murder but quickly morphs from a court case to a revenge scenario and then segues into a gripping chase thriller which ends with the entire police force of Paris and a fleet of taxi cab drivers on a massive manhunt for a murder suspect. [Spoilers ahead] The set-up hooks you from the start as industrialist Pierre Verdier (Jacques Berthier) pushes his mistress Jeanne (Francoise Brion) to her death from a speeding train. Due to a lack of evidence in the case, Berthier walks free but Jeanne’s husband Ancelin (Lino Ventura) sets in motion a diabolical plan for revenge. He slips into Berthier’s mansion, turns off the electricity and ambushes Berthier when he arrives home in the dark.

Ancelin (Lino Ventura) prepares to take revenge on the man who murdered his wife in Witness in the City aka Un temoin dans la ville (1959), directed by Edouard Molinaro.

Ancelin stages Verdier’s death by hanging to look like a suicide but he overlooked one important detail. Verdier had called a taxi to his home before he was attacked and now Lambert (Franco Fabrizi), the cab driver, is waiting outside. Ancelin tries to exit Verdier’s estate without being seen but Lambert mistakes him for his passenger and gets a good look at his face. As Ancelin hurries away, he has second thoughts about fleeing and turns back, gun in hand, to kill the only witness who could implicate him in a murder. But Lambert has already sped off to his next fare and so begins a deadly hunt by Ancelin to catch his prey before the police can investigate.

Ancelin (Lino Ventura, left) is spotted by taxi driver Lambert (Franco Fabrizi) leaving the scene of a crime in Witness in the City aka Un temoin dans la ville (1959).

Witness in the City is briskly paced with an escalating sense of tension that rarely abates as the events unfold over a 48-hour period, most of it taking place at night. Even a subplot about the blossoming romance between Lambert and co-worker Lilane (Sandra Milo), a call operator at the taxi company, doesn’t sidetrack the suspense and actually enhances it as the viewer becomes fearful for the young couple and what will happen to them as Ancelin stakes out their job site, local hangouts and living quarters. The paranoid, fatalistic tone is magnificently orchestrated by Molinaro through the twists and turns of a screenplay he co-wrote with Gerard Oury and Alain Poire and was based on a novel by Pierre Boileau and Thomas Narcejac; this is the famous tag team that wrote the novels Celle Qui N’Etatis plus and D’Entre Les Morts which were adapted into career defining films for Henri-Georges Clouzot – Diabolique in 1955 – and Alfred Hitchcock – Vertigo in 1958. 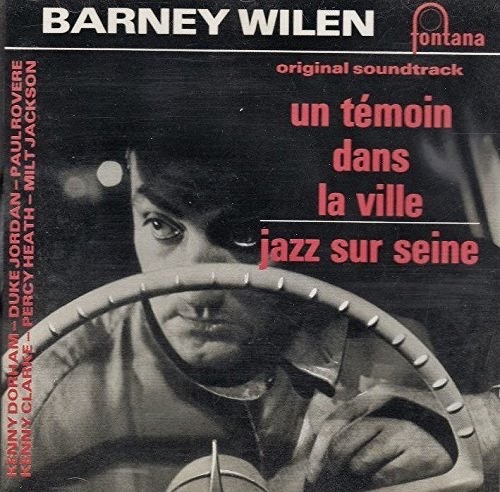 It is also a pleasure to revel in the velvety black and white cinematography of Henri Decae (The 400 Blows, Purple Noon) which depicts a rarely seen side of Paris by night with empty back streets and a deserted city park and aviary where the manhunt comes to a violent finale. The moody jazz score composed by French tenor and soprano saxophone player Barney Wilen alternates between the mellow and the frenetic and features accompanying jazz legends Kenny Dorham (trumpeter), Duke Jordan (pianist), Paul Rovere (bass) and Kenny Clarke (drummer). The soundtrack on Polygram Records is still available on CD, LP and in digital form from some online sellers. 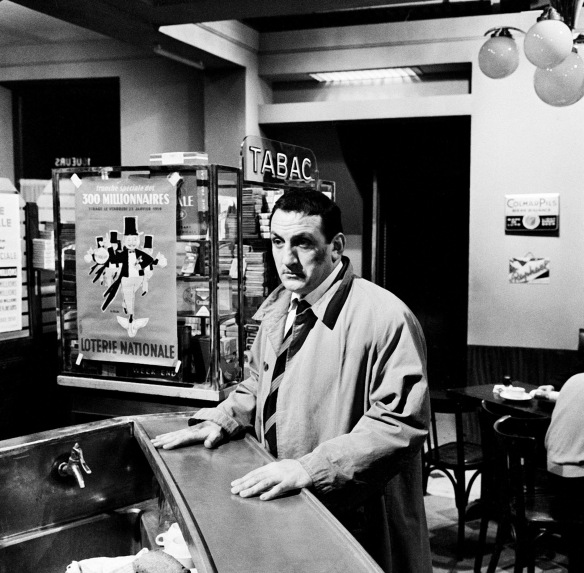 Ancelin (Lino Ventura) takes refuge in a cafe after being wounded in Witness in the City aka Un temoin dans la ville (1959), directed by Edouard Molinaro.

Although Witness in the City is a French production with a mostly French cast, the two male leads – Lino Ventura and Franco Fabrizi are Italian – and the female star, Sandra Milo, is from Tunisia. Lino Ventura was born in Parma, Italy but grew up in Paris and carved out a spectacular career for himself as both cops and thugs in French and Italian films. In one of his first movies he played a devious hitman in Henri Decoin’s Razzia sur la chnouf (1955) and he quickly graduated to major roles in career highpoints like Jean-Pierre Melville’s Le Deuxieme Souffle (1966) and Army of Shadows (1969), Henri Verneuil’s The Sicilian Clan (1969) and Francesco Rosi’s Illustrious Corpses (1976).

Lambert (Franco Fabrizi, right) suddenly recognizes his fare as the killer (Lino Ventura) who has been stalking him in Witness in the City aka Un temoin dans la ville (1959).

Ventura has rarely been as menacing or as lethal as he is in Witness in the City. At first he is almost sympathetic as he goes about an ingenious plan to avenge his murdered wife. But once he decides to eliminate a happy-go-lucky cab driver as a possible witness, he becomes the villain of the piece. Most of the suspense in the film is generated by Ventura’s frequent attempts to assassinate Lambert – an attempt to push him in front of a subway train is particularly memorable – but he is constantly thwarted until the final third of the film when he achieves his goal. As he attempts to flee various policemen and taxi driver friends of Lambert, he crashes one stolen car after another, inflicting bodily harm on himself as well as his pursuers. Yet he keeps on the move, bloodied and limping, an unstoppable force of nature like Arnold Schwarzenegger in The Terminator. It is one of Ventura’s greatest and most physical performances.

Lambert (Franco Fabrizi) and Liliane (Sandra Milo) are lovers and coworkers at a taxi company in the suspense thriller Witness in the City aka Un temoin dans la ville (1959).

Franco Fabrizi and Sandra Milo as the young lovers are both famously associated with the films of Federico Fellini and other Italian films. Fabrizi’s breakthrough role was in Fellini’s I Vitelloni and he had memorable parts in the maestro’s Il Bidone, Nights of Cabiria and Satyricon. He has also worked for Michelangelo Antonioni (Le Amiche, 1955), Pietro Germi (The Facts of Murder, 1959), Antonio Pietrangeli (I Knew Her Well, 1965), Luchino Visconti (Death in Venice, 1971) to name a few Italian directors but also was active in French cinema too such as Roger Vadim’s No Sun in Venice (1957) and Henri Decoin’s Anyone Can Kill Me (1957).

Lambert (Franco Fabrizi, left) and his taxi driver pal tease Liliane (Sandra Milo) about her romance with Lambert in Witness in the City aka Un temoin dans la ville (1959).

Sandra Milo is best known for playing Marcello Mastroianni’s mistress in Fellini’s 8 ½ (1963) but she is also memorable in the director’s Juliet of the Spirits (1965) as three different characters. Other notable roles include Roberto Rossellini’s General Della Rovere (1959) and two films by Antonio Pietrangeli – Adua and Her Friends (1960) and The Visit (1963). 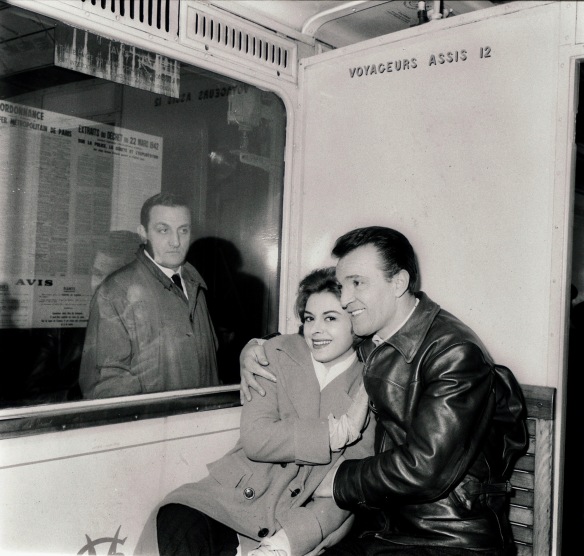 A publicity photo from Witness in the City aka Un temoin dans la ville (1959) with Lino Ventura (outside window), Sandra Milo and Franco Fabrizi.

Fabrizi and Milo are both charismatic and sympathetic in Witness in the City but Milo has one of the best scenes. When Lambert switches on the inconspicuous audio speaker in the taxi when he realizes his passenger is the homicidal Ancelin, Lilliane broadcasts it on the taxi company’s intercom so that everyone can hear it. The look of panic and helplessness on her face as cab drivers race against time to rescue Lambert is palpable and it doesn’t end well.

Director Edouard Molinaro (second from left at camera) on the set of Witness in the City aka Un temoin dans la ville (1959).

Molinaro, who started as a documentary filmmaker, directed some other superior crime thrillers starting with his debut feature film, Back to the Wall aka Le dos au mur (1958), starring Jeanne Moreau as the target of a blackmail scheme. Equally compelling are Des Femmes Disparaissent aka The Road to Shame (1959) about a female slave trade operation with a fantastic music score by jazz drummer and bandleader Art Blakey and The End of Belle (1961), a psychological crime thriller about a strangled American student. Witness in the City is Molinaro’s crowning achievement in this genre and it is hard to believe that this is the same director who achieved worldwide fame with La Cage aux Follies and other light comedies.

Witness in the City aka Un temoin dans la ville is not currently available on any format in the U.S. although you can find Blu-Ray and DVD imports of the Gaumont release from online sellers but it is in the PAL format so you will need an all-region player to view it.