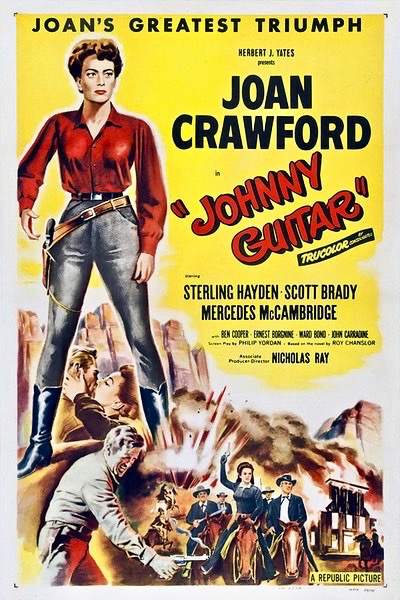 In the fifties, the Western genre experienced a revitalization that saw new approaches to the form – everything from a film noir interpretation like The Furies (1950) to a psychological thriller like High Noon (1952) to a promotional gimmick like the 3-D Western, Hondo (1953). However, it’s safe to say that Johnny Guitar (1954), Nicholas Ray’s bold experiment with color, role reversal, stylized sets, and operatic emotions is a one of a kind masterpiece that will never be repeated.

Functioning on one level as an anti-McCarthy attack on mob psychology, the film tells the story of Vienna (Joan Crawford), a saloon owner who welcomes the coming of the railroad to her frontier town. A group of community members, led by the enraged Emma Small (Mercedes McCambridge), oppose the idea and plot to drive Vienna from their community. For protection, Vienna hires a former gunslinger, Johnny Guitar (Sterling Hayden), whom she hasn’t seen since they ended their tumultuous relationship five years earlier. Once Johnny arrives, however, emotions run high, aggravated by Vienna’s romantic relationship with the Dancin’ Kid (Scott Brady), an outlaw whose crimes are partially blamed on the female saloon owner.

Produced by Republic Studios, Johnny Guitar was Ray’s first project after leaving RKO Studios where he had been under contract for seven years. The film was part of a package that included Roy Chanslor, a former journalist turned screenwriter, who wrote the screenplay especially for Joan Crawford. At the time, Republic was considered the most prestigious of the minor studios and Ray’s contract with them gave him a great deal of creative freedom despite the film’s modest budget.

One of the first things he did was hire Philip Yordan for a complete rewrite of the script. Yordan later said, “He collaborated with me less on the dramatic than the architectural level, creating settings like the saloon, working on the geometrical relationships between places.”

Vienna (Joan Crawford) plays a tune on the piano while awaiting the arrival of a lynch mob in Johnny Guitar (1954).

Johnny Guitar was filmed on location at Sedona, Arizona, where Republic built a small Western set abutting a cliff. Other scenes were filmed near Oak Creek Canyon, between Phoenix and Sedona, where the rocks have a reddish tint, something Ray captures in his stylized color palette for the film.

Many of the supporting actors were veterans of other Western films like Ward Bond, John Carradine, Royal Dano, Ernest Borgnine and Sheb Wooley but Sterling Hayden was an unusual choice for the title role since he didn’t know how to ride a horse, play the guitar or shoot a gun. Not that any of that mattered, since the crucial showdown in the film is between Vienna and Emma. 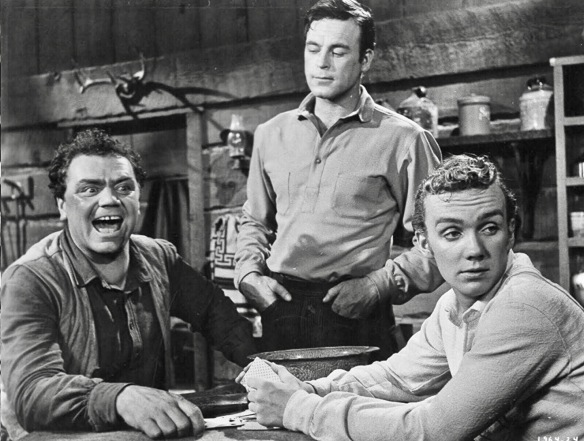 Like their on-screen characters, Joan Crawford and Mercedes McCambridge were fierce rivals on the set as well. Crawford, whose professional jealousy of younger actresses was well known, initiated the feud after she angrily observed the director, cast, and crew applauding Mercedes’ scene where she addresses the posse. Ray later admitted, “I should have known some hell was going to break loose.” Later that night, an inebriated Joan Crawford was seen by the director stumbling along the highway. In her wake was a long trail of objects that he recognized as costumes and clothing belonging to McCambridge; Crawford had obviously raided the younger actress’ dressing room in a drunken rage. 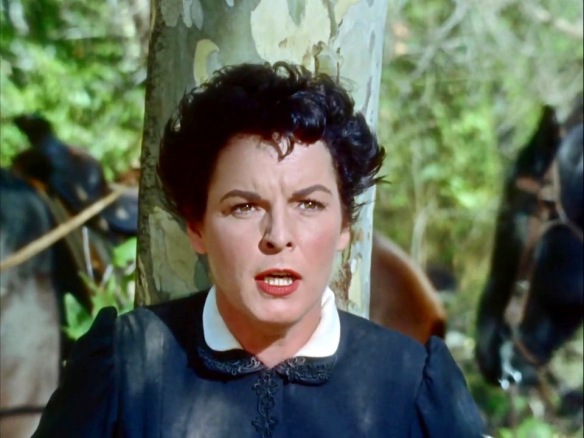 The very next day Crawford demanded major changes to the screenplay – favoring her – and had them approved since she was the star of the film. The major revision was an issue over gender. Instead of Johnny Guitar and the Dancin’ Kid as the central focus, Vienna and Emma would take center stage in the more traditionally masculine roles.

Joan Crawford plays a saloon keeper and town pariah in one of her most extreme and over-the-top roles – Johnny Guitar (1954), directed by Nicholas Ray.

In her autobiography, The Quality of Mercy, Mercedes McCambridge wrote, “For the scene in which I died….my fall was done by a stunt man, Chuck Wilcox. He looked so funny in a copy of my dreary costume with a frizzy indigo wig. Sterling Hayden said he looked like a mother superior in drag. However, until the moment of the fall, the person on the balcony is me. It is even me crashing backwards through the wooden railing. I did the fall onto a mattress on the ground just a few feet below. Then the camera discovers Chuck, careening crazily to my death way down there in the bottom of the gorge. The reverse angles of that sequence – Miss Crawford’s footage – were all shot inside, back at the studio, in the San Fernando Valley.” 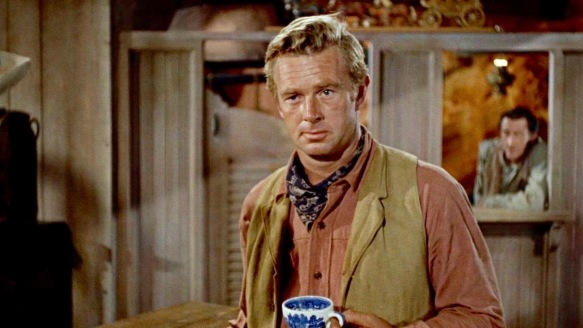 Director Nicholas Ray was quite unhappy during the filming of Johnny Guitar and later admitted, “Quite a few times, I would have to stop the car and vomit before I got to work in the morning.” And his unpleasant memories of the production were only reinforced by the mostly negative reviews the film received from American critics when it opened.

The Hollywood Reporter called it “one of the most confused and garrulous outdoor films to hit the screen in some time.” Variety wrote “Joan Crawford, whose previous western was Montana Moon in 1930, has another try at the wide open spaces with Johnny Guitar. Like Moon, it proves the actress should leave saddles and levis to someone else and stick to city lights for a background…Love, hate and violence, with little sympathy for the characters, is stirred up during the overlong film.” And Bosley Crowther of The New York Times was particularly hostile to Crawford’s performance remarking, “no more femininity comes from her than from the rugged Mr. Heflin in ‘Shane.’ For the lady, as usual, is as sexless as the lions on the public library steps and as sharp and romantically forbidding as a package of unwrapped razor blades.” 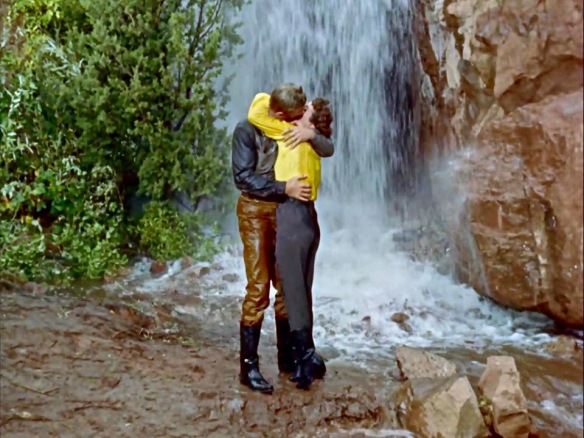 Yet, in Europe, Johnny Guitar was greatly admired. Francois Truffaut proclaimed it “the Beauty and the Beast of Westerns” and the film’s cult following has grown considerably since its original release, making it one of Ray’s most enduring works. In fact, in 2008 the National Film Registry selected Johnny Guitar for film preservation along with such fellow inductees as The Killers (1946), A Face in the Crowd (1957), Foolish Wives (1922) and Hallelujah! (1929). Nowhere else in the Western genre will you find a film with such a hallucinatory quality, mixing melancholy lyricism, Freudian psychology, Greek tragedy, romantic melodrama, sexual hysteria and film noir elements in equal parts. It also has a haunting theme song by Victor Young and Peggy Lee and is sung by the latter.

Johnny Guitar made its first appearance on DVD from Olive Films in August 2010 with no extras other than an introduction by Martin Scorsese. Fans of the film were delighted to finally have a handsome, digitally restored version of Ray’s one-off for their collection. In August 2012 Olive Films released a multi-format set of the same transfer for Blu-Ray and DVD owners but the best was yet to come in September 2016 – a 4K digital restoration of the film on Blu-Ray (from Olive) in widescreen for the first time along with a host of excellent supplements that include Tell us She Was One of You: The Blacklist History of Johnny Guitar with historian Larry Ceplair and blacklisted screenwriter Walter Bernstein; My Friend, the American Friend, a biographical essay on Nicholas Ray; audio commentary by film critic Geoff Andrew; an insert booklet with an essay by film critic Jonathan Rosenbaum and other extras. 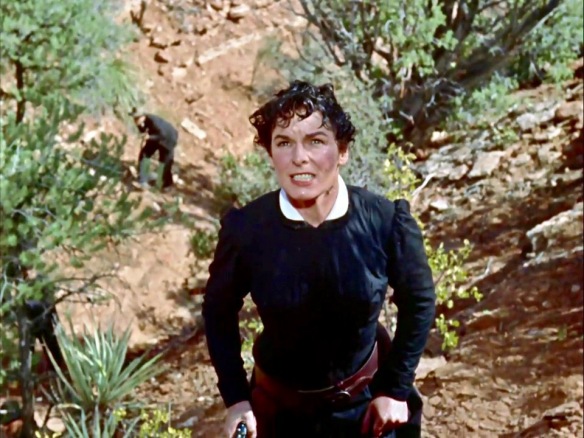 Other weblinks of interest