Imagine living in a remote area where there is no running water or electricity. There are also no established roads or available food nearby or even much protection from extreme temperatures in the winter and summer. You can also forget about any local services like a doctor or policeman or mail carrier. We’re not talking about America here but a desolate region of Macedonia where life is a daily hand-to-mouth struggle.

Winner of the Grand Jury prize at the Sundance Film Festival in the World Cinema Documentary category, Tamara Kotevska and Ljubomir Stefanov’s Honeyland is a remarkably intimate and engrossing human portrait of Hatidze Muratova and her 85-year-old mother who live in primitive conditions in the deserted village of Bekirlija, Macedonia. Although it is essentially a documentary, it has the feel of a scripted drama made with non-professional actors who are playing themselves.

Hatidze Muratova worries about her frail, elderly mother (in the background) in the 2019 documentary, Honeyland, filmed in Macedonia.

Honeyland does not offer any voice-over narration or introductory background on what we are about to see. Instead the filmmakers immediately immerse the viewer in an unfamiliar setting with two people who speak an ancient form of the Turkish language. Hatidze is a middle-aged peasant woman who takes care of her infirm mother and mostly supports herself through beekeeping and the honey she sells at a distant market. Slowly we are draw into Hatidze’s daily routine of caregiving and checking her beehives in various locations such as inside stone walls in her village, a tree trunk in a stream and the side of a mountain pass.

This is a woman who lives in perfect harmony with her environment despite the hardships of residing where there are no neighbors or people to help with chores. But all of this changes with the arrival of Hussein Sam, his wife Ljutvie and their seven rambunctious children who settle into one of the abandoned village shacks and attempt to survive by farming. 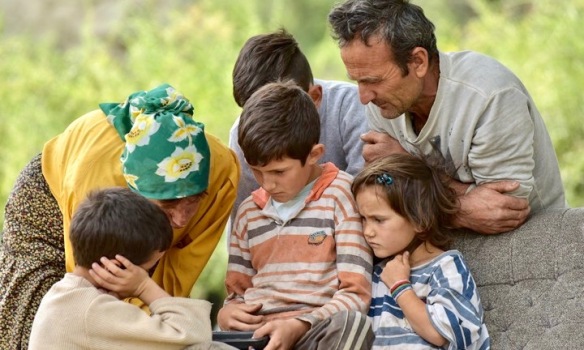 Hatidze (in scarf on left) instructs Hussein (upper right) and his children on the art of beekeeping in Honeyland (2019).

At first Hatidze seems pleased if somewhat cautious in welcoming her new neighbors but still shares her beekeeping knowledge with Hussein and his family. Unfortunately, Hussein proves to be too impulsive, impatient and unprincipled to succeed as a farmer and his reckless ways create a divisive synergy within his own family. Indeed, their desperate economic situation forces the entire family to work long hours and the strain is evident from their frequent arguments and moments of outright rebellion which are mostly in response to Hussein’s constant refrain of “no work, no food.”

One of Hussein’s children watches her family at their daily work in Honeyland (2019).

Events take a darker turn when Hussein begins eyeing Hatidze’s beekeeping operation as a means to make some easy money and his deal-making with a local entrepreneur makes Hatidze regret ever sharing her self-taught tricks of the trade.

Filmmakers Tamara Kotevska and Ljubomir Stefanov only used available light in their stunning documentary feature Honeyland (2019), set in a remote area of Macedonia.

In the hands of another filmmaker, Honeyland might have been a difficult and punishing viewing experience but directors Tamara Kotevska and Ljubomir Stefanov have crafted a live-affirming tribute to the indomitable spirit of their main protagonist who emerges as a genuinely heroic character. There is beauty amid the adversity and idyllic passages that will probably linger in your memory for weeks afterward such as Hatidze sharing a slab of luscious honeycomb with her dog or serenading the bees with an old folk tune.

Hatidze Muratove (with her dog) is the main focus on the 2019 documentary about a Macedonian beekeeper – Honeyland (2019).

There are also some uncomfortably tense moments in the film such as a scene where Hussein’s young daughter slips under the surface of a swimming hole and seems in danger of drowning until one of her semi-oblivious brothers notices and pulls her to safety.

A scene from Kaneto Shindo’s award-winning documentary, The Naked Island (1960).

Thanks to the evocative cinematography (using only available light) and the rich sound design, Honeyland is closer to a cinematic poem than a traditional ethnographic study. In some ways it is comparable in design and tone to Kaneto Shindo’s 1960 masterpiece The Naked Island (Hadaka no Shima), a dialogue-free documentary that follows a family of four as they struggle for survival on a remote island in the Japanese archipelago.

Hatidze Muratova, a beekeeper in Macedonia (left), shows a neighbor’s son how to tend beehives in Honeyland (2019).

One final note: Anyone expecting an ecological polemic or a save-the-bees message film in Honeyland will find something more subtle and nuanced but that doesn’t mean there aren’t obvious lessons to be learned here. The film is currently showing at Atlanta’s Landmark Midtown Art Cinema and is certain to be a contender for a Best Documentary Oscar this year. 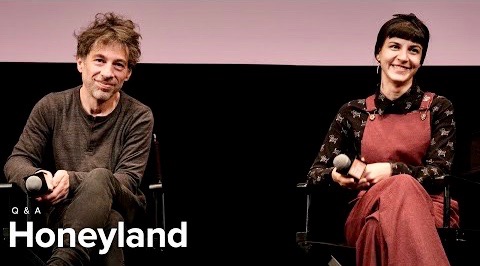 Ljubomir Stefanov and Tamara Kotevska are the directors of the 2019 documentary, Honeyland.