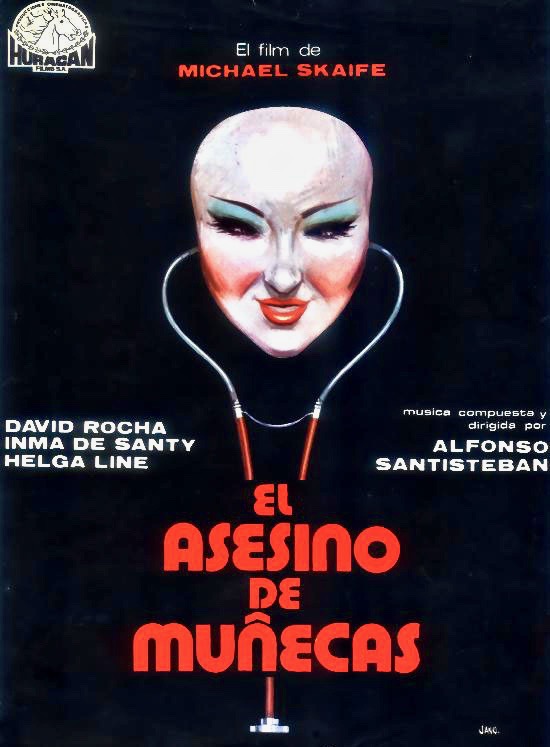 Not all film preservationists are focused on saving and restoring lost classics of silent and early cinema like Abel Gance’s Napoleon (1927) or overlooked noir indies from Hollywood’s golden era such as Richard Fleischer’s Trapped (1949). Mondo Macabro, which has been around since 2003 or so, is dedicated to introducing movie lovers to fringe cinema from around the world – obscure genre films that run the gamut from horror to sexploitation to art house oddities from countries as far flung as Japan, Latvia and South Africa. Among some of their offbeat releases are Lady Terminator (1989), a cheesy Indonesian rip-off of James Cameron’s The Terminator, The Living Corpse (1967), a vampire thriller from Pakistan, and Strip Tease (1963), a melancholy French drama starring Nico (of The Velvet Underground) with music by Serge Gainsbourg and Alain Goraguer. The company’s most recent release on Blu-Ray, The Killer of Dolls (El asesino de manecas, 1975), is easily one of their most peculiar and transgressive acquisitions to date.

Director Miguel Madrid aka Michael Skaife makes a cameo appearance as a destroyer of dolls in the introduction to El Asesino de Munecas (The Killer of Dolls, 1975).

The director, Miguel Madrid (credited as Michael Skaife on the film), only made three films and is virtually unknown outside of his native country Spain. Horror fanatics might be familiar with his 1971 debut feature, Necrophagus, which was released in the U.S. as Graveyard of Horror and is generally reviled by genre fans as a listless, poorly edited mess about the living dead. 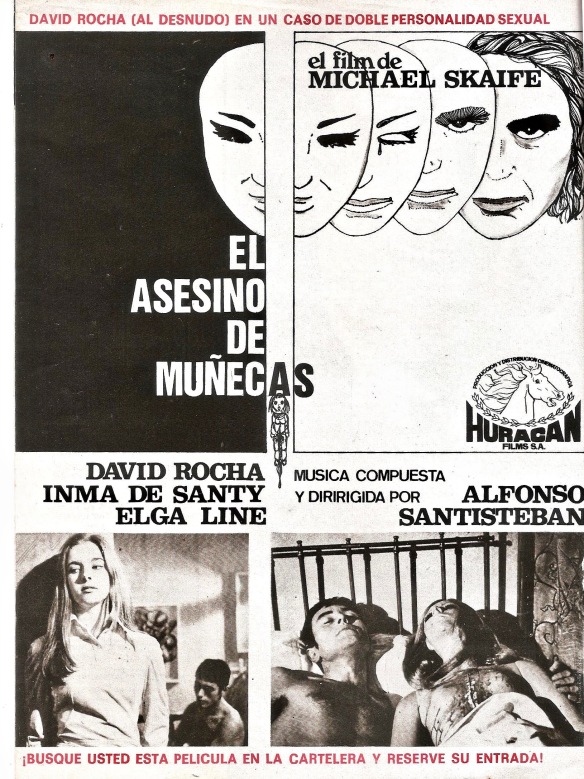 The star of The Killer of Dolls, David Rocha (real name Jose Luis Moreno) is also relatively unknown although he has enjoyed some cult success in Spain with supporting roles in four films by Paul Naschy (aka Jacinto Molina) including The Traveler (El Caminante, 1979), and Luis Bunuel’s That Obscure Object of Desire (1977). 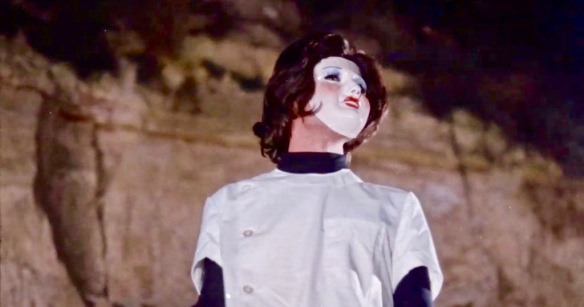 A masked serial killer is on the loose in a city park in the Spanish psychological thriller, The Killer of Dolls (1975).

Thanks to Mondo Macabro, Rocha and Madrid, who died in 1996, may finally achieve some kind of cinema immortality for The Killer of Dolls, which should attract a cult following for its sheer weirdness and obsessive tone. To be sure, there are plenty of flaws. It was such a low-budget production that no retakes were allowed resulting in uneven performances and awkward continuity. Some of the camerawork is shaky with an over reliance on the zoom lens and certain visual motifs like doll heads, mannequins and plastic body parts become needlessly repetitive. Yet, in a strange way, these defects also contribute to the film’s off-kilter nature which achieves something approaching a deranged alternate universe. 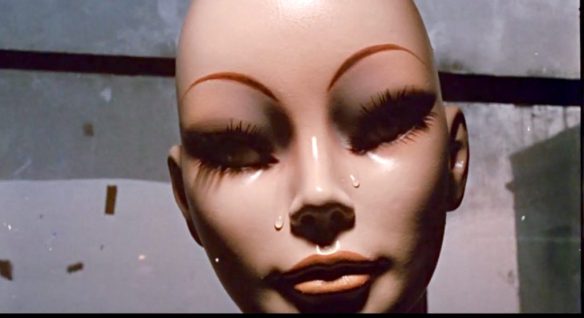 Images of mannequins and dolls permeate the dream like imagery of The Killer of Dolls, a 1975 psychological thriller from Spain.

[Spoiler alert] Even though The Killer of Dolls was promoted as a horror film in the style and manner of Italian giallos of the period like Hatchet for a Honeymoon and The Bird With the Crystal Plumage, it is neither a straightforward slasher film or even a mystery thriller since the killer’s identity is revealed early in the film. Think of it more as a psychological case study with large portions of it told through from the point of view of a seriously disturbed individual. 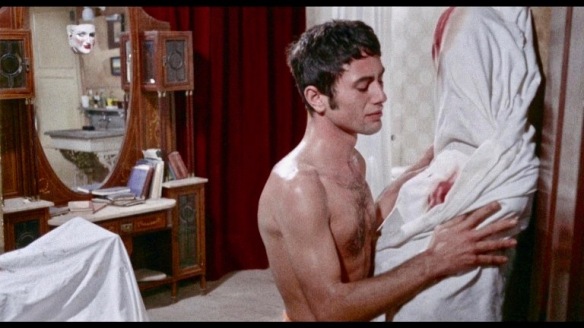 David Rocha plays a twisted former medical student who can’t tell reality from his hallucinations in The Killer of Dolls (1975).

Paul (David Rocha), the protagonist, is a medical student who was recently expelled from school because he becomes faint at the sight of blood. He is soon put to work by his father, the gardener of a large estate owned by the Countess Olivia (Helga Line). When Paul’s parents go on vacation, the young man starts to have a complete mental breakdown and soon the police are investigating a string of murdered women. 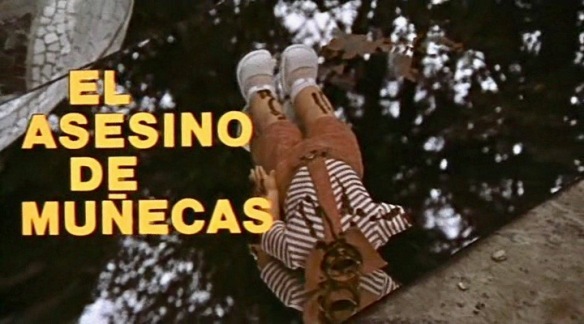 Paul is a major head case whose madness is revealed through his hatred of dolls, which he not only collects but also enjoys tearing apart, burning or dissecting on an autopsy table in the privacy of his room. Sexual identity confusion is also a major problem in his interactions with others, particularly women. All of it stems from early childhood when his sister died and his mother began treating Paul as a daughter. The psychological fallout from this accounts for Paul’s frequent hallucinations where people appear as mannequins. Even worse, he has developed an alter ego in the form of his dead sister who appears to Paul in mirrors and compels him to murder. 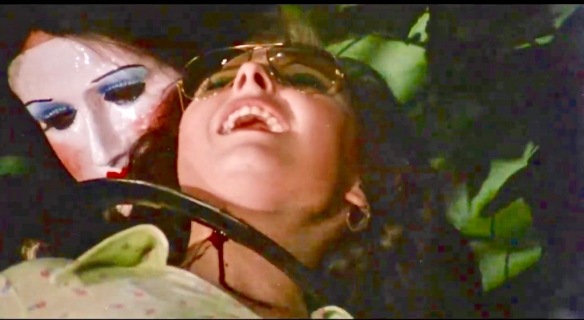 A woman abandoned by her date in the park falls victim to a masked assailant in The Killer of Dolls (1975), directed by Miguel Madrid aka Michael Skaife.

How does one begin to play such a tormented character? David Rocha throws himself into the role with such a rabid intensity that it occasionally topples over into unintentional comedy but there is no denying his effectiveness at gender shifting from his feminine side to macho aggressor. 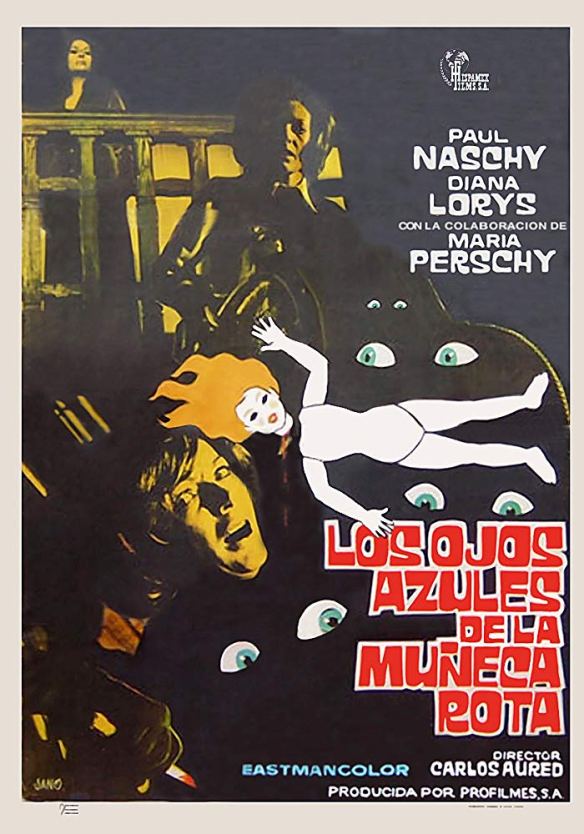 What is particularly atypical for this type of film is the lack of female nudity although the misogynistic tone is unfortunately hard to ignore and was typical of so many Spanish horror films and thrillers during the seventies such as The Blood Splattered Bride, Blue Eyes of the Broken Doll (aka Los Ojas Azules de la Muneca Rota) and It Happened at Nightmare Inn. In a rare example of reverse exploitation, it is the male killer who is fetishized as a sex object, appearing in various scenes of undress, especially shower scenes where he fondles himself with orgiastic abandon. His overt narcissism is constantly on display whether he is sexually taunting the Countess or parading around in underwear or skin-tight clothes with shirts open to the waist. 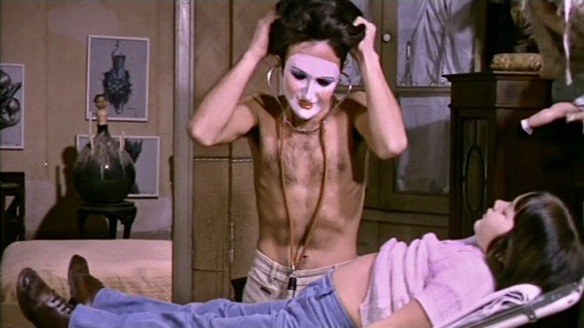 Paul (David Rocha in mask) prepares to operate on a naive neighborhood kid who thinks he is playing “hospital” in The Killer of Dolls (1975).

The other big disconnect for some viewers may be the fact that no one seems to notice Paul’s completely unstable behavior. The Countess continues to lust after him even after he berates her for propositioning him and then attacks a garden table with a pruning blade in reaction. Audrey (Inma de Santis), the Countess’s virginal daughter, is also infatuated with Paul and doesn’t seem concerned about his obsession with dolls and mannequins. There is also Robert, a young boy of nine or ten who becomes an unlikely playmate of Paul in the movie’s most disturbing subplot. Robert comes close to being murdered twice (both attempts are interrupted by visitors) but he thinks Paul is just playing with him.

The Killer of Dolls stands out as an oddball example of a film that blurs the line between exploitation and art film without comfortably settling into either category. It is worth seeing for Rocha’s over-the-top performance alone which is either so-bad-it’s-good or a valid interpretation of schizophrenic disorder. If the film had been hugely successful during its original release, it would probably have stereotyped Rocha as crazies for the rest of his film career in the same way that Psycho‘s Raymond Bates became Anthony Perkins’ best remembered role. 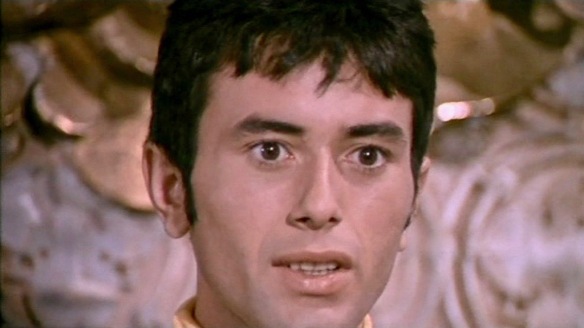 David Rocha aka Jose Luis Moreno stars as the tormented protagonist of The Killer of Dolls, 1975.

Among the other intriguing attributes of The Killer of Dolls are the many surreal dream sequences and hallucinations which exploit the creepiest aspects of Paul’s hang-ups (the opening credit sequence set in a mannequin factory is stunning). Fans of the legendary architect Antonio Gaudi will also enjoy the film’s fantastic setting in Barcelona’s Park Guell, which serves as the Countess’s estate (The other Spanish locations include Sitges and Castelldefels). 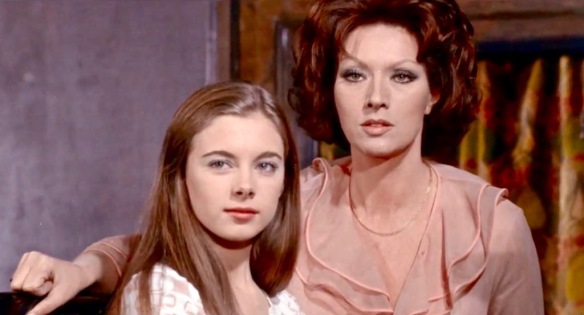 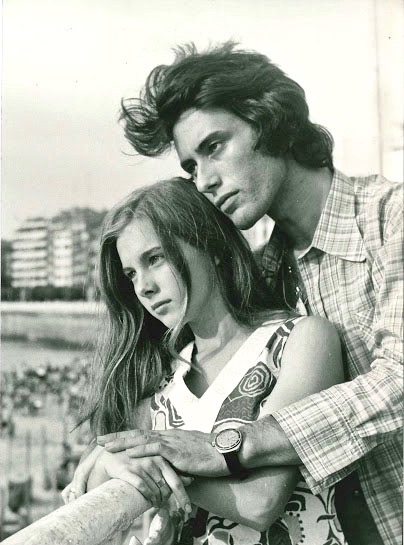 A publicity shot of Inma de Santis and David Rocha during the making of The Killer of Dolls (1975) in Spain. 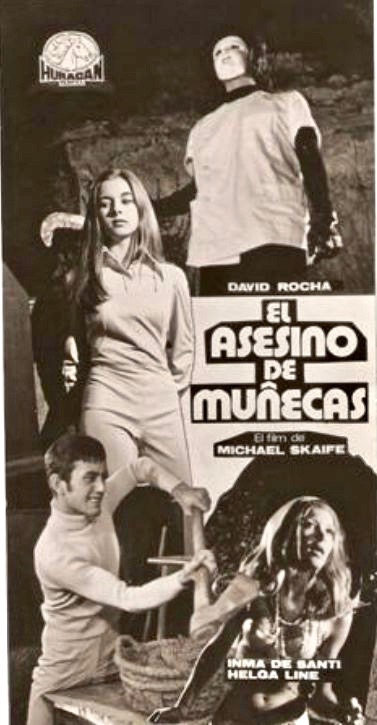 Last for not least the music score by Alfonso Santisteban effectively reflects the musical influences of the seventies starting with an opening theme that sounds inspired by Shaft and other Blaxploitation soundtrack albums. There is also an amusing and unexpected musical interlude which predates the music videos of the eighties and features a folk rock band performing at a deserted amphitheater while two female dancers do “The Robot.” Remember that dance? 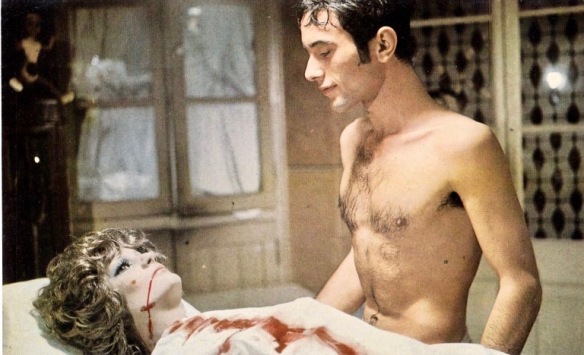 Paul (David Rocha) admires a recent trophy from his stalking session in a local park in the 1975 Spanish thriller, The Killer of Dolls (1975).

When you look at The Killer of Dolls in the context of when it was made, it is rather extraordinary that it even exists. It was released in early 1975 while General Franco was still alive (he died in November 1975) and Spanish cinema was still at the mercy of an all-powerful board of government censors. It is more than a little surprising that so much taboo material – an androgynous protagonist, male nudity, gore, interracial sex (The Countess goes to bed with her black servant Rene) and the threat of child abuse – managed to survive the cut. In an extra feature on the Blu-Ray of The Killer of Dolls, we discover that the censors were more concerned with how Spain and the setting might be perceived by audiences outside the country. As a result, the director was ordered to give the cast, including himself, non-Spanish names and change the setting to France (in name only). 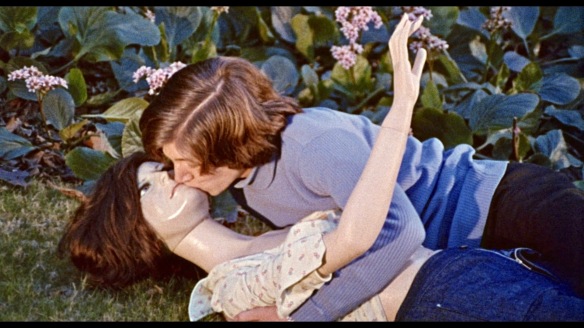 A serial killer spies on a couple making love but sees the woman as a mannequin in the 1975 Spanish psycho thriller, The Killer of Dolls.

The Blu-Ray of The Killer of Dolls is recommended for connoisseurs of bizarre cinema and includes several extra features of interest: two audio commentaries, one by Kat Ellinger of Daughters of Darkness Podcast fame and one by Euro-cult expert Robert Monell & film historian Rod Barnett. It also includes an interview with actor David Rocha and an interview with Dr. Antonio Lazaro-Reboll, author of Spanish Horror Film. 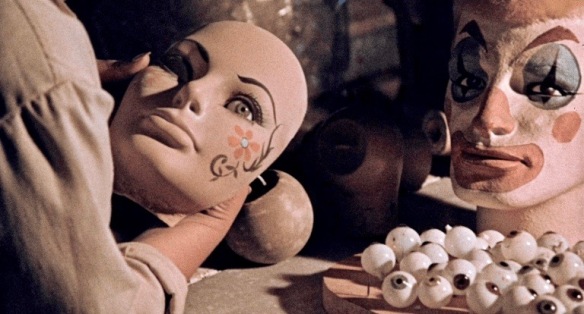 The opening credit sequence of The Killer of Dolls (1975) is set in a mannequin factory. 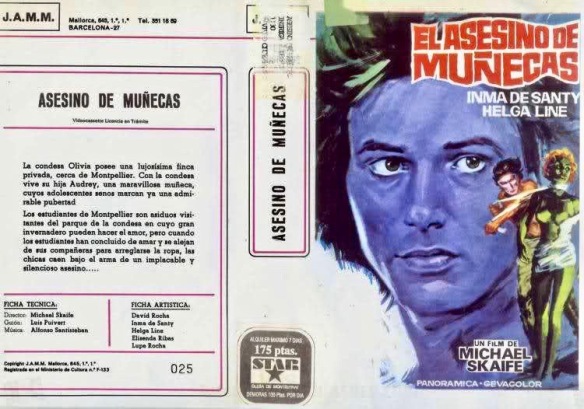 The Spanish DVD cover for The Killer of Dolls (1975)