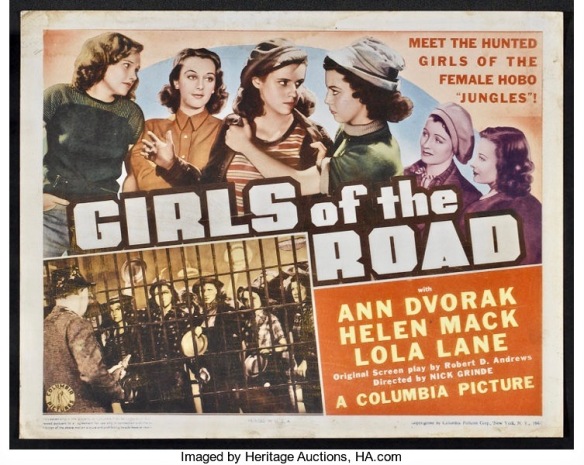 Films about hobos have always been predominantly about male characters, with few exceptions such as Veronica Lake donning a male hobo disguise and tagging along with Hollywood producer-turned-drifter Joel McCrea in Sullivan’s Travels [1941]. So, it’s particularly unexpected and refreshing to see a Depression era based film like Girls of the Road (1940), in which almost all of the central characters are women, playing runaways, vagrants and other homeless cases, fending for themselves on the margins of society.

At the time it was made Columbia was rivaling Warner Bros.’s output in the early thirties with a slew of social issue/exploitation programmers such as Glamour for Sale [1940], Convicted Woman [1940] and Men Without Souls [1940]. While it certainly wasn’t perceived as anything distinctive or different from the other low-budget genre films being spit off the assembly line, Girls of the Road looks much more interesting today and is a cut above the standard Columbia B-movie.

Part of the reason is the film’s offbeat subject manner – how many films about girl hobos can you name? – but it’s also the tug-o-war between the exploitation elements and genuine social critique that make it a fascinating oddity. Then there’s the casting starting with the criminally undervalued Ann Dvorak and including such spunky character actresses as Helen Mack (The Son of Kong [1933]), Lola Lane (oldest sister of actresses Rosemary and Priscilla Lane), Ann Doran (Rebel Without a Cause [1955]), Mary Field (Song of the South [1946]) and Grace Lenard. The token male actors include small roles for Bruce Bennett (Mildred Pierce [1945]) as a police officer and Don Beddoe (The Face Behind the Mask [1941]) as an unsympathetic sheriff.

Ann Dvorak, whose talent was mostly wasted during her Warner Bros. days as a contract player, would occasionally win a role that demonstrated what a fine actress she could be – The Crowd Roars [1932], Scarface [1932],  Three on a Match [1932], Heat Lightning [1934], Dr. Socrates [1935]. By the time she made Girls of the Road, she was deeply entrenched in a B movie career, most of it undistinguished, and she probably didn’t relish making this one either. Yet, it was clearly a star role for her (despite the movie’s poverty row budget) and she makes the most of it as Kay Warren, the privileged daughter of a governor, who becomes emotionally invested in the plight of homeless women and runaways during the Depression. 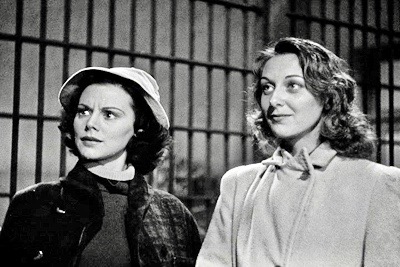 Helen Mack (left) and Ann Dvorak star in the B-movie quickie about female hobos – Girls of the Road (1940), directed by Nick Grinde.

The film throws us quickly into the premise with a quick montage of dramatizations depicting the dangers of life on the road, ending with one unfortunate earning a newspaper headline as the victim of the “Hobo Girl Strangler.” But that’s another movie.

Determined to do something about the rapidly escalating situation after her father refuses to take action (based on a report), Kay decides to leave home but leaves behind this note: “Dad, the girls in the report aren’t figures and facts. They’re people like me. I’m going to meet and try to find out about them. Maybe there is some way to help them. Please don’t try to make me come back until I’m ready.” Then she hits the road, disguised as a vagrant on the run with a fake backstory. Almost immediately she gets picked up a masher and gets out of his car in a rainstorm. She then hooks up with a fellow hitchhiker, Mickey (Helen Mack), and they make their way to a girl hobo camp which is soon busted by the cops.

After a brief jail stint with the obligatory food fight and riot scene, the female transients are taken to the train depot and herded onto boxcars headed for the state border where they will be processed by the local authorities. A change of plans occurs, however, when one of the girl hobos causes the sheriff to fall off the moving train and afraid of reprisals, the entire group flees the train, scattering in all directions.

The second half of Girls of the Road follows Kay and Mickey’s brief stay at a motor court where they offer refuge to Jerry (Ann Doran), a former jailmate who soon robs them and betrays them to the cops. Kay and Mickey manage to avoid capture, thanks to a sympathetic truck driver, and make their way to a rural hobo camp run by Ellie (Lola Lane), a tough, confrontational type who clearly has it in for her latest arrivals after hostile earlier impressions. More hardships and trouble occur before a tragedy brings them all together in a moment of female bonding. Then a swarm of cops close in and it’s back to the authorities for an unexpected – and idealized – happy ending.

You can tell from the above synopsis that Girls of the Road, directed by Nick Grinde, takes a formulaic approach to the social problem of hobo girls, introducing melodrama, chase sequences and tawdry situations every few minutes to keep the sixty-one minute movie hurling along. There are also absurd contrivances such as the introduction of a young innocent who spent her last money on her wedding dress instead of a train ticket to join her future husband. So there she is amid a pack of homeless, predatory females, clinging to her neatly wrapped wedding dress and hoping to hitchhike or boxcar-hop her way to the wedding in time.

Female vagrants take shelter from the authorities in Girls of the Road (1940), directed by Nick Grinde.

It also has to be said that being a typical B-unit production from White Hollywood, there is no representation by Black, Mexican, Native American or any other ethnic group on display but you can almost sense them just beyond the camera range, living an existence even worse than the one shown.

Despite these obvious flaws, there are plenty of powerful and moving scenes in this unpretentious minor leaguer that successfully evoke the era in spirit, either through the dialogue and situations or in purely visual terms.

Hobos in a boxcar view female runaways passing along the rail in Girls of the Road (1940).

One of the most evocative moments in the film occurs when the hobo girls are taken to the train depot where the sheriff intends to transport them to the state line. As their train pulls in with boxcar after boxcar filled with other hobos like them, mostly men, the camera cuts back and forth between both groups as they eye each other. No words or dialogue are needed as we see the faces before us and for a brief moment I forgot I was watching actors instead of real people.

Lola Lane (center) and her homeless pals acknowledge a passing boxcar full of hobos in Girls of the Road (1940).

Helen Mack and Lola Lane, in particular, bring real grit and a believable cynicism to characters who have seen their share of hard knocks. Dvorak, in contrast, has the more difficult role of trying to fit in with this hardened bunch and not really succeeding in fooling anyone – either her fellow hobos or the viewer. For one thing her polished manner, obvious education and stylish clothes are a dead giveaway that she’s not the real McCoy but she’s eventually accepted nonetheless with few questions asked. The reason her idealized and implausible character works is because Dvorak exudes such a warm and luminous presence here with those big, soulful eyes of hers and that unique face which can look beautiful one minute and haggard and haunted the next.

Ann Doran plays a traitorous vagrant in the B-movie social drama, Girls of the Road (1940), directed by Nick Grinde.

There are other things I love about Girls of the Road such as the idyllic hobo jungle in the countryside complete with a lake, abandoned farmhouse and bucolic surroundings with no men in sight. In fact, many of the women partner up as couples though any suggestion of lesbian behavior is never overt, except in the eye of the beholder perhaps. And even though this all-female encampment is never as idealized as the shantytown in Frank Borzage’s Depression era romance, A Man’s Castle (1933) – the women are constantly bickering and fighting – it does offer a respite from the road or the railyard or some industrial urban setting.

Spencer Tracy (left) and Loretta Young star in the Depression-era romance set in an idealized shantytown in A Man’s Romance (1933), directed by Frank Borzage.

I also like the tough, sarcastic non-stop bantering between the hobo girls as they constantly jockey for position or advantage amongst themselves. Partly it’s a survival tactic, partly a reflection of their experience “out there.”  Yet, unlike Warner Bros. Depression era dramas like Heroes for Sale [1933] or Wild Boys of the Road, Girls of the Road isn’t as relentlessly grim and Dvorak gets off lightly without having to learn about life on the road in a manner than would scar her forever. There is even unexpected humor here and there and one surprising moment when the seemingly heartless Ellie breaks out in song with a spiritual – “Swing Low, Sweet Chariot” – in response to the death of a fellow drifter. In the end, Girls of the Road offers hope at the end of the tunnel with an FDR New Deal wet dream climax but it’s the journey there that often reflects glimpses of the real world. 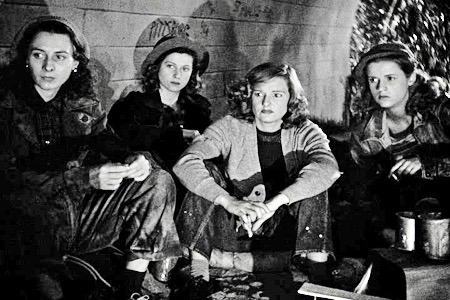 Homeless female vagrants experience the dangers of Depression era America in Girls of the Road (1940).

According to studio production notes, Dvorak, Mack and Lane were all briefly apprehended by the police in Saugus, California during the filming of Girls of the Road; the lawmen thought the trio were genuine vagrants.

Director Nick Grinde might not rate the accolades usually bestowed on directors like William Wellman and Howard Hawks but he was an efficient and prolific craftsman whose specialty was entertaining, fast-paced, assembly line genre pictures. Among his more recognizable credits are the Pre-Code Shopworn (1932) with Barbara Stanwyck, Public Enemy’s Wife (1936) starring Pat O’Brien, several Boris Karloff vehicles including Before I Hang (1940) and Hitler-Dead or Alive (1942), a bizarre WWII propaganda melodrama that remains an undiscovered cult gem.

Girls of the Road is not available at this time on any format although it occasionally pops up on TCM, which is where I first saw it. It would make sense for a DVD/Blu-Ray distributor to package this title along with other B-movie rareties from Columbia into a “special collection” for classic film fans. Until that happens, you can view a mediocre print of it on Youtube.

Ann Dvorak (left) and Helen Mack take shelter during a rainstorm with other homeless women in Girls of the Road (1940).Bruce

*This is a revised and updated version of a blog that originally appeared on Movie Morlocks (later renamed Streamline), the official blog of Turner Classic Movies