Mark Harris’s best-seller Pictures at a Revolution: Five Movies and the Birth of the New Hollywood pointed to 1967 as the year that the studio system crumbled and a new order emerged while Peter Biskind’s Easy Riders, Raging Bulls profiled the subsequent rise of the young turk directors in the seventies who changed cinematic conventions with their idiosyncratic films. Martin Scorsese, Steven Spielberg, Francis Ford Coppola, George Lucas, Peter Bogdanovich are usually singled out as the prime movers and shakers by film historians of that era while the once high profile Hal Ashby is often underrated and relegated to the sidelines. Hal, Amy Scott’s new documentary on the director, is a welcome homage that attempts to elevate and restore this influential figure to his rightful place in Hollywood history. 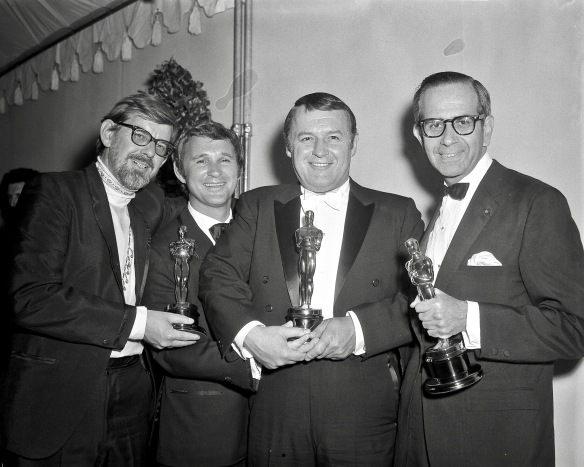 Left to right: Hal Ashby, Norman Jewison, Rod Steiger and producer Walter Mirisch on Oscar night displaying their awards for In the Heat of the Night (1967).

Trying to cover a director whose work spanned four decades in a ninety minute documentary would be a challenge for any director and Scott, a film editor making her directorial debut, clearly reveres her subject. But Hal feels more like a brisk, lightweight Cliffs Notes version of the director’s life and career than the in-depth portrait he deserves. For example, there is precious little about Ashby’s days as an assistant editor in the late fifties under William Wyler (The Big Country), George Stevens (The Diary of Anne Frank) and others before he hooked up with his mentor Norman Jewison beginning with The Cincinnati Kid. Despite this, Ashby fans will probably enjoy the ride and perhaps younger viewers will seek out the films that established his reputation.

Ruth Gordon, Hal Ashby and Bud Cort on the set of Harold and Maude (1971).

There are certainly things to savor such as clips from Ashby’s memorial service featuring Warren Beatty, which opens the film, and Bud Cort (“Hal loved me the best”). Behind-the-scenes footage of the director on the set of films like Harold and Maude and The Landlord are sprinkled throughout the film and such iconic industry insiders as film producer Peter Bart, Jane Fonda, cinematographer Haskell Wexler, director Norman Jewison, screenwriter Robert Towne and admirers (Judd Apatow, David O. Russell, Alexander Payne) are on hand to offer glowing appraisals and candid comments. Key scenes from Ashby’s most famous films are also well chosen and the documentary often attempts to add some context to each film with some fascinating details about what was happening on and off the set (improvisation instead of a completed script for Coming Home, weaving political and social commentary into the narrative of Shampoo, championing the use of excessive profanity in The Last Detail). 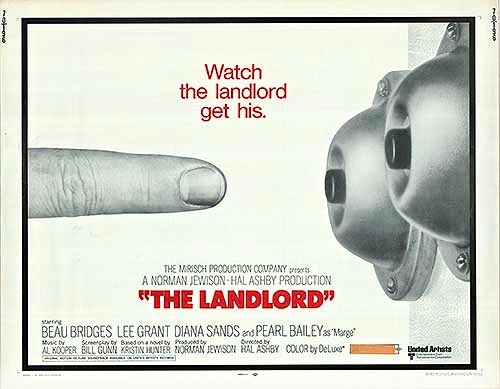 The film poster for The Landlord, a marketing campaign that Hal Ashby especially detested and wanted to change to no avail.

In terms of the presentation, Hal takes a conventional, chronological approach, mixing talking heads with photographs, film clips and sound bites. Scott does employ a few stylistic devices such as imprinting quotes from Ashby on the screen while we hear his voice commenting on his life and career but this is more of a distraction than insightful and the fact that Ashby’s written remarks are sometimes spoken by actor Ben Foster (Leave No Trace, Hell or High Water) creates a strange duality. 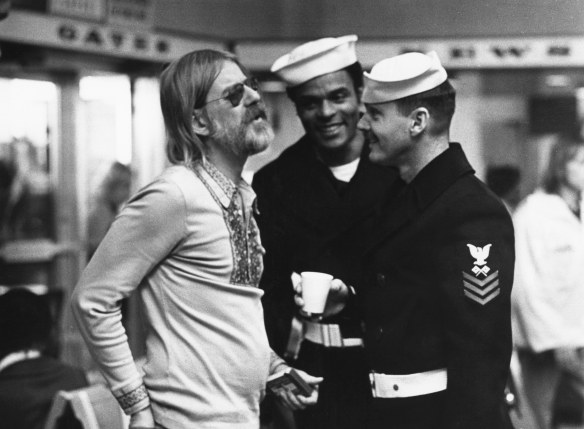 While most of Hal is focused on the man’s gifts as an editor and director and his unique abilities to draw superb performances from his actors, it touches only briefly on his private life and difficult youth including his father’s suicide and his inability to be a dependable husband or father (He was married five times and often employed his current girlfriends on works in progress). His obsessive, workaholic personality and genuine distrust of studio bosses are also addressed in visual footnotes though Norman Jewison claims that it was he who instilled an anti-studio bias in Ashby during the early stages of their friendship. 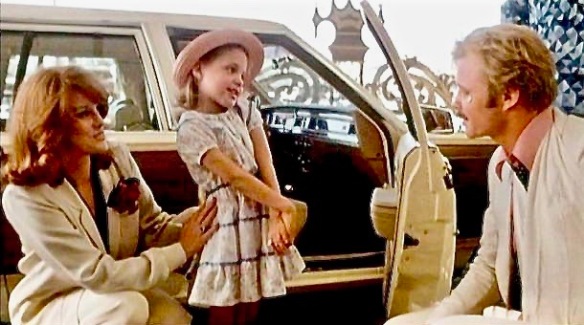 Ann-Margret, Angelina Jolie and her real-life father Jon Voight in Lookin’ to Get Out (1982).

One touching anecdote involves Leigh MacManus, Ashby’s daughter by his first marriage to Lavon Compton. MacManus laments the fact that she rarely saw her father but she cites Lookin’ to Get Out as her favorite Ashby film, mainly for the scene where Jon Voight’s hapless, self-absorbed gambler is briefly reunited with his abandoned daughter played by Voight’s real-life six-year-old daughter Angelina Jolie, a case of art mirroring life since Voight and Jolie were for many years famously estranged as father and daughter. 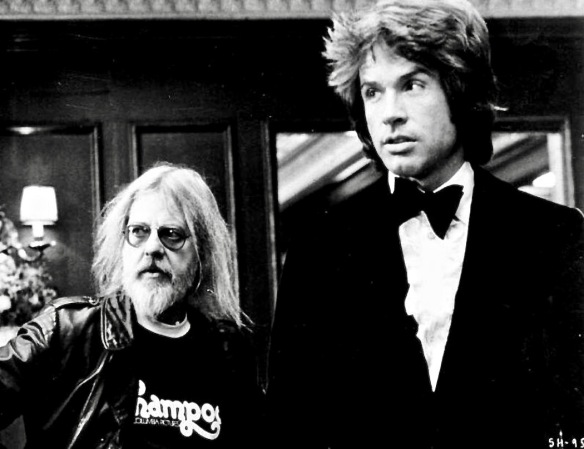 Hal Ashby and Warren Beatty on the set of Shampoo (1975).

Certainly the unanswered question in Hal is what actually derailed the director’s career. After a remarkable 7-film run in the seventies from the underrated (The Landlord) to cult favorite (Harold and Maude) to the Oscar-nominated prestige of The Last Detail, Shampoo, Bound for Glory, Coming Home and Being There, Ashby floundered in one box-office bomb after another. Although you get glimpses of the Las Vegas tragicomedy Lookin’ to Get Out and the murky crime drama, 8 Million Ways to Die, other Ashby projects are virtually ignored like Second-Hand Hearts (aka The Hamster of Happiness), The Rolling Stones’ concert film, Let’s Spend the Night Together, and the Neil Simon romantic comedy, The Slugger’s Wife.

How did Ashby go from superstar status and the giddy highs of Being There to the abject failure of Second-Hand Hearts almost overnight? I mean….what the hell happened? Yes, studio interference and Ashby’s refusal to compromise or relinquish his control over his work were factors in his rapid decline in the eighties. But he also seemed to lose his magic touch for picking material that thoroughly engaged him. Even his genius for casting the right actors seemed to fail him as in the case of the mismatched Robert Blake and Barbara Harris in Second-Hand Hearts.

Hal Ashby and Robert Blake on the set of Second-Hand Hearts (aka The Hamster of Happiness, 1981).

The toxicity of fame, erratic behavior due to escalating drug use and the pressure to turn out hits after his previous track record are all factors in Ashby’s lamentable decline but to get a better understanding of the life experiences that shaped Ashby as a director as well as what really happened to his career after Being There, I highly recommend reading Nick Dawson’s well-researched and compelling biography, Being Hal Ashby: Life of a Hollywood Rebel. It provides a much-needed accompaniment to Scott’s warm, respectful but ultimately skin deep tribute.