Buster Keaton plays a hapless cowpoke who tries to save a cow named Brown Eyes from the slaughterhouse in Go West (1925).

Peter Bogdanovich’s documentary homage, The Great Buster, is scheduled to open at theaters across the country in October 2018 and perhaps it might introduce a new generation of film-goers to the silent era legend. I would certainly recommend The General, Steamboat Bill, Jr. and The Cameraman to Keaton novices but even his less celebrated efforts are cinematic wonders brimming with visual poetry and imaginative sight gags like Go West (1925).

Released between the feature films Seven Chances (1925) and Battling Butler (1926), Go West (1925) might be the bleakest and most pathos-ridden of any Keaton production in terms of its hapless main character and the storyline. As a drama, it would be unbearable but as a comedy it has a light, deadpan grace and a beguiling theatre of the absurd quality enhanced by its stark setting; in this film, you can see why Keaton was often compared to the sort of alienated souls who populate the plays and novels of Samuel Beckett. 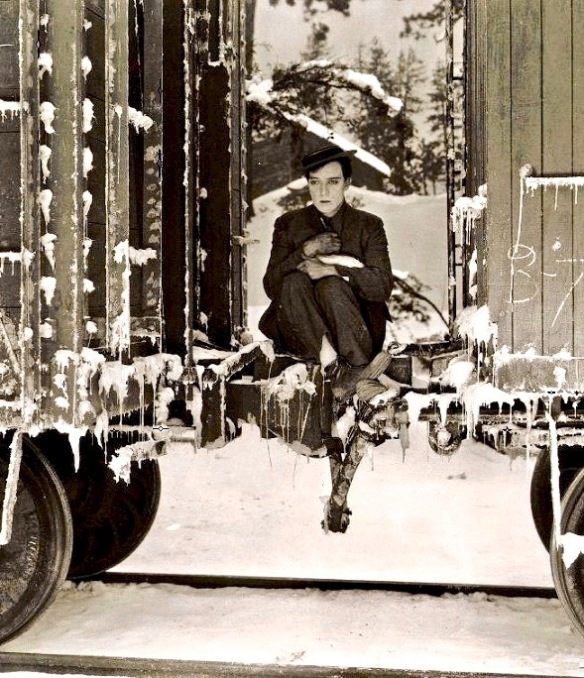 Friendless (Buster Keaton) flees the midwest via a freight train for greener pastures on the frontier in Go West (1925).

Here is a brief synopsis: An inept, bumbling Midwestern youth named Friendless decides he’s not cut out for big city life and sneaks aboard a freight train traveling west. After accidentally being deposited in the middle of the Arizona desert, the lad wanders into the Diamond Bar Ranch where he manages to find work as a cowpuncher. His complete lack of experience or skills make him the laughing stock of the ranch but he does form a loyal and affectionate friendship – possibly the only one in his life – with a female cow named Brown Eyes. When the latter is carted off to the slaughterhouse, Friendless follows in pursuit, inevitably coming to the rescue but also succeeding in driving the Diamond Bar’s herd to market in Los Angeles against all odds, including a shootout with rivals and a runaway train.

Buster Keaton and Kathleen Myers star in one of Keaton’s most underrated comedies, Go West (1925).

Everything Friendless attempts to do seems destined to failure in Go West. His first task on the ranch is to milk a stubborn cow which he thinks can be accomplished by simply placing a bucket under the animal and waiting for the results. Yet Friendless can be surprisingly resourceful and inventive in the face of adversity such as demonstrating a novel way to herd aggressive bulls into the pen via a matador act.

Buster Keaton plays a clueless wannabe cowboy whose best friend is a cow in Go West (1925).

Some Keaton scholars have suggested that Go West is a subtle satire of Charlie Chaplin’s approach to comedy with its tendencies toward wistfulness and sentimentality. Keaton subverts the audience’s expectations by playing everything poker-faced and avoiding the romantic clichés of the genre by having Friendless more devoted to the cow, who also appears to be the outcast of the herd, than trying to win the love of the ranch owner’s daughter (Kathleen Myers).

A romance between Friendless (Buster Keaton) and the ranch owner’s daughter (Kathleen Myers) is secondary to the cowpoke’s friendship with a cow in Go West (1925).

Keaton’s innate understanding of his craft and appeal was best expressed by James Agee when he wrote, “Keaton’s face ranked almost with Lincoln’s as an early American archetype: it was haunting, handsome, almost beautiful, yet it was irreducibly funny; he improved matters by topping it off with a deadly horizontal hat, as flat and thin as a phonograph record…No other comedian could do as much with the dead pan. He used this great, sad, motionless face to suggest various related things: a one-track mind near the track’s end of pure insanity; mulish imperturbability under the wildest of circumstances, how dead a human being can get and still be alive; an awe-inspiring sort of patience and power to endure, proper in granite but uncanny in flesh and blood. Everything that he was and did bore out this rigid face and played laughs against it.”

Buster Keaton confirms his reputation as “The Great Stone Face” in a tense gambling scene with armed players in Go West (1925).

Indeed, even in the poker game sequence in Go West, where Friendless is ordered to smile by a gun-toting rival card player, he attempts to force his face into the desired expression using his hands but is not convincing. (The sequence could be a homage or parody of the famous scene in D.W. Griffith’s film Broken Blossoms or The Yellow Man and the Girl (1919) when Lillian Gish tries to force herself to smile amid the most brutal circumstances).

The filming of Go West was an expensive proposition for Keaton, who was a stickler for authenticity. “We shot Go West about 60 miles out of Kingman, Arizona,” the actor/director recalled. “We were really out in open country…four cameramen…electrician – generally takes about three men with him…technical man – takes a couple of dozen carpenters with him…Then we house ’em up there, see – we take tents and everything else and a portable kitchen.” 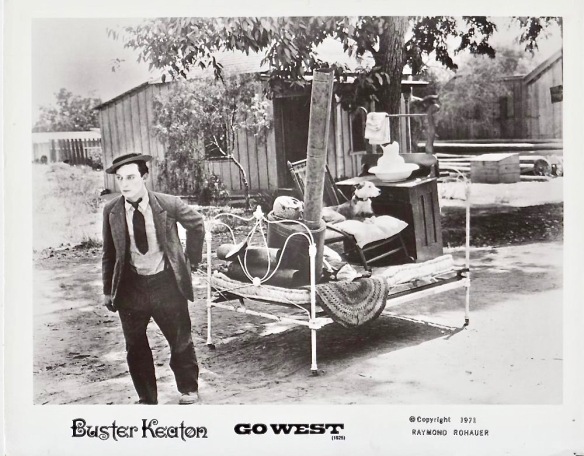 Buster Keaton plays a man named Friendless from the midwest who tries to make a new life on the prairie in Go West (1925).

But shooting on location is often no picnic and the desert heat, often reaching temperatures of 120 degrees in the sun, threatened to melt the emulsion off the film stock so the cameras had to be packed in ice. Meanwhile, Brown Eyes, the co-star of the film, went into heat, which delayed production for two weeks. She couldn’t easily be replaced due to her unique appearance and the fact that Keaton had spent ten days training her.

The results were worth it though because Go West is probably Keaton’s most austere and offbeat feature film and gets better with each viewing. Film historian David Thomson calls Go West, “a masterpiece of the moving camera,” and many Keaton scholars agree that the climactic cattle drive from the train depot in Pasadena through the downtown streets of Los Angeles and into the stockyards is one of the silent comedian’s greatest sequences in his films.

Buster Keaton and a cow named Brown Eyes are the true stars of Go West (1925).

Regarding the film’s climactic stampede, Keaton later recalled, “I actually turned ’em loose here in Los Angeles in the Santa Fe depot in the freight yards, and brought ’em up Seventh Street to Broadway…And we put cowboys off every side street to stop people in automobiles from comin’ into it…I brought 300 head of steers up that street…I was in a costume place, and I saw a Devil’s suit…’Cause I was tryin’ to lead ’em towards the slaughter house, I put that suit on and I thought I’d get a funny chase sequence…But as I moved, they stopped too. They piled up on each other. They didn’t mind a stampede at all.” 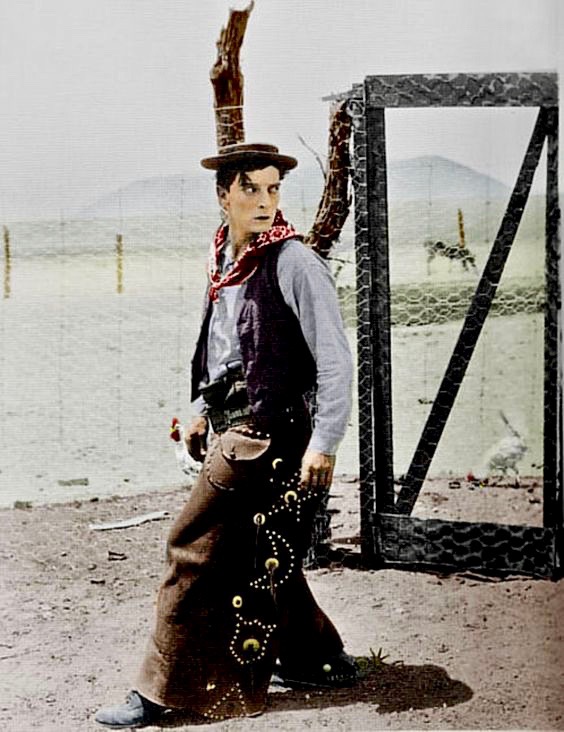 A rare color photo of Buster Keaton in the 1925 silent comedy, Go West.

In this final sequence, as the cows pour into the streets and the shops along the way, you might catch a glimpse of Joe Keaton, Buster’s father, in a barber shop. According to IMDB, Keaton’s friend, Roscoe “Fatty” Arbuckle, also appears in drag in a cameo as a woman in a department store though I have yet to confirm this with my own eyes.

A scene from the underrated Buster Keaton comedy, Go West (1925).

Critics at the time were mixed in their response to Go West. The Variety reviewer complained that “The cow is the whole show,” and Mordant Hall of The New York Times wrote, “Although Buster Keaton’s new film, Go West, is somewhat lackadaisical in the introductory sequences, when the fun does start popping it is rich and uproarious, with countless novel comedy twists.” Other reviewers noted that audiences seemed to enjoy it even if it wasn’t up to the standards of such successes as Sherlock Jr. (1924). Even Keaton seemed disappointed with the final result: “Some parts I liked, but as a picture, in general, I didn’t care for it.”

Go West almost matched the box office success of Keaton’s previous release, Seven Chances, but due to the production costs of shooting on location, the profits were considerably less in comparison. Regardless, Go West enjoys a much better reputation today and was an important stepping stone to Keaton’s masterpiece the following year – The General (1926).

Go West is currently available on DVD in a double feature set with Battling Butler from Kino Lorber. The disc was released in September 2011 and is still your best option for purchase until some distributor issues a restored Blu-Ray edition of the film.