A former actor from Austria turned film director, Georg Tressler is not a name familiar to most American movie fans but for German filmgoers of the fifties he created a sensation with this 1956 feature film debut, Die Halbstarken (released in the U.S. as Teenage Wolfpack). As topical, incendiary and controversial in its day as The Wild One (1953), Rebel Without a Cause (1955) and Blackboard Jungle (1955), Die Halbstarken was a hard-hitting portrait of juvenile delinquency in post-war Germany and featured Horst Buchholz as a manipulative gang leader in a performance possibly inspired by James Dean. It was a huge hit and led Tressler to follow it up with two more youth-oriented films – Noch Minderjahrig (Under 18, 1957) and Endstation Liebe (Two Worlds, 1958). His fourth feature, Das Totenschiff (Ship of the Dead, 1959), was a complete departure from his trilogy in terms of content and was mostly ignored by critics and the public. But timing is everything and today Das Totenschiff looks like a lost classic from the pre-Berlin Wall era. And it may very well be Tressler’s finest achievement.

A gripping tale of survival that begins as a misadventure and culminates in enslavement, degradation and murder, Das Totenschiff is based on a novel by B. Traver, the author of The Treasure of the Sierra Madre. The film follows Philip Gale (Horst Buchholz), a sailor who has his money and passport stolen by a prostitute while on shore leave in Antwerp. When Gale’s ship leaves without him, he tries to find work on other vessels sailing to America but no one will hire him without identity papers. Gale is soon apprehended by the local authorities for having no ID and threatened with six months in prison. Instead, the magistrate decides to have Gale removed from his jurisdiction and escorted to the border by two policemen who give him some money for train fare to the next country.

Gale (Horst Buchholz, center), a sailor without identity papers, is escorted to the border by police in Das Totenschiff (1959), directed by Georg Tressler.

The sailor continues to travel south making one bad decision after another until he arrives at a small port in Spain. Desperate for work, he is lured into working on the Yorikke, a decrepit freighter operated by smugglers (a discovery Gale makes mid-voyage). Once aboard, he becomes a prisoner of the captain and his motley trio, forced into hard labor in the boiler room with other unfortunate misfits who have been shanghaied.

At the time Das Totenschiff was released, the German cinema was at a crossroads. Political and social forces were having a major impact on the film industry and by mid-August of 1961, East and West Germany were divided by the Berlin Wall and its boundaries. Many films produced in West Germany after this line-in-the-sand reality were made at the recently reorganized UFA Studios (owned by the Deutsche Bank) while movies made in the Soviet controlled zone of East Germany came from DEFA, the state owned studio of the German Democratic Republic. West German studio-produced films that examined the past and the Nazi regime such as Bernhard Wicki’s anti-war drama Die Brucke (The Bridge, 1959) would soon be overshadowed by the emergence of the New German Cinema with works like Alexander Kluge’s satire of the German economic boom, Yesterday Girl (1966), and Mahlzeiten (Table for Love, 1967), Edgar Reitz’s critique of modern marriage and parenthood. Das Totenschiff may have been viewed as old-school filmmaking at the time since it was based on a literary work set in the post-WWI era but the film’s ideological slant is hiding in plain side. In fact, it could have easily been a DEFA production with its sinister and skewed portrait of “management vs. worker.”

The corrupt captain of the ship (Alf Marholm) and his cohorts are essentially criminals involved in smuggling ammunition to Africa (hidden in tins of plum butter) but also guilty of human trafficking; their crew is made up of drifters, criminals and derelicts with no working papers and therefore no rights. They are little more than slaves and their plight shares some of the thematic concerns of other works by B. Traven which depict the exploitation of the lower class and the disenfranchised. Literary critics generally regard the author’s six novel series known as ‘The Jungle Novels’ as his finest work; those novels, which include The Rebellion of the Hanged, chart the political awakening and eventual revolt of Indians working on mahogany plantations in Chiapas, Mexico.

B. Traven, author of The Treasure of the Sierra Madre, in Chiapas, Mexico.

Of course, The Treasure of the Sierra Madre, set in Depression-era Mexico, is the most famous of all B. Traven film adaptations but Das Totenschiff is no less powerful in its depiction of men driven to desperate circumstances and deserves to be better known. Traven, who allegedly based Das Totenschiff on his own experiences as a political activist and writer from Germany trying to flee Europe, is something of an enigma in the literary world. He revealed little about his past during his lifetime and often gave contradictory and fictitious accounts of his background, including the use of various pseudonyms such as Traven Torsvan, Hal Croves, Ret Marut and Otto Feige. During the making of The Treasure of the Sierra Madre, director John Huston had planned to use Traven as a consultant on the film but the author didn’t show up as promised and sent a close acquaintance, Hal Croves, to act on his behalf. It is now generally believed that Traven and Croves were the same person.

Helmut Schmid (left) and Horst Buchholz (right) star in the gripping sea drama, Das Totenschiff aka Ship of the Dead, 1959.

B. Traven’s life would make a fascinating biopic on its own and there are several biographies of the shadowy figure available such as B. Traven: The Life Behind the Legends and The Secret of Sierra Madre: The Man Who Was B. Traven. But Das Totenschiff, the novel and the film, is an excellent introduction to the writer. The film version is also noteworthy for its excellent ensemble cast headed by Horst Buchholz as the ill-fated Gale (nicknamed Pippin in the film) and several prominent German actors as his shipmates such as Martin (Helmut Schmid of The Head, A Prize of Arms and Man Called Gringo), the Hulk-like coal shoveler, and Paul (Gunter Meisner of Willy Wonka and the Chocolate Factory and Agusti Villaronga’s deeply disturbing In a Glass Cage), the quiet, introspective ship trimmer who dies a hero. 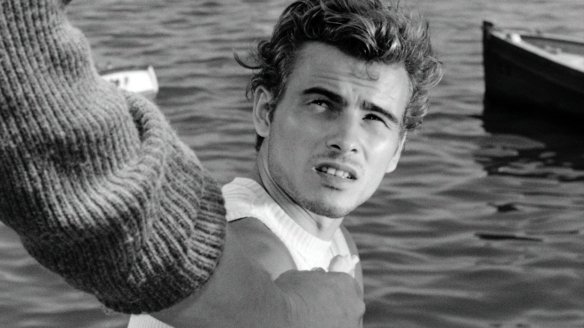 Horst Buchholz plays a sailor without working papers who is about to be shanghaied in Das Totenschiff (1959).

Buchholz was on the cusp of international fame at this point in his career. He first attracted critical acclaim and acting awards for Himmel ohne Sterne (Sky Without Stars, 1955) and his roles in Tressler’s Teenage Wolfpack and Two Worlds launched his career as a German matinee idol, which he capitalized on in Confessions of Felix Krull (1957). His first English-language film, Tiger Bay (1959), co-starring Hayley Mills, made him famous in England but The Magnificent Seven (1960) established him as an international star. Strangely enough, Das Totenschiff was the last German film Buchholz would make in his native country for more than a decade (Billy Wilder’s One, Two, Three (1963) doesn’t count since it was an American film production). The film also held no appeal for Buchholz’s female fan base since it was a gritty, harrowing drama with the star spending most of his time dressed in grimy work clothes and covered with coal dust. 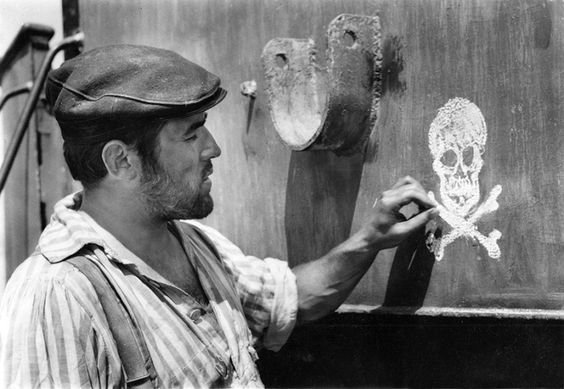 Mario Adorf as Lawski, contemplates his fate on a death ship called The Yorikke in Das Totenschiff (1959).

Nevertheless, Buchholz is ideally cast as the death ship’s protagonist and takes us through Gale’s emotional and attitudinal changes from a reckless, devil-may-care drifter to a brutalized and paranoid victim of circumstances. His conflicted relationship with Lawski (Adorf), the man partially responsible for his plight, provides an intriguing secondary narrative and yields unexpected moments of humor, volatility and compassion. Adorf, 88 years old and still working as an actor, is one of the great character actors of world cinema and has appeared in such disparate films as Robert Siodmak’s The Devil Strikes at Night (1957), Sam Peckinpah’s Major Dundee (1965), Dario Argento’s The Bird with the Crystal Plumage (1970), Volker Schlondorff’s The Tin Drum (1979) and Rainer Werner Fassbinder’s Lola (1981). As Lawski in Das Totenschiff, Adolf is completely convincing as a simple laborer who considers the Yorikke his true home despite its injustices and suggests he is suffering from the Stockholm syndrome.

Das Totenschiff is also memorable for Elke Sommer’s brief but welcome appearance as a lonely rural teenager longing for romance with Gale. This was her film debut (she was 19 at the time) and she has a fresh, natural beauty which is completely unglamorized. That would soon change in subsequent films like Daniella by Night (1961) and Sweet Ecstasy (1962) where she was promoted as a sexy blonde siren. The brief romantic flirtation between Gale and Mylene in the film offers an idyllic respite from the ensuing darkness and claustrophobic tension that dominates the second half of the story. 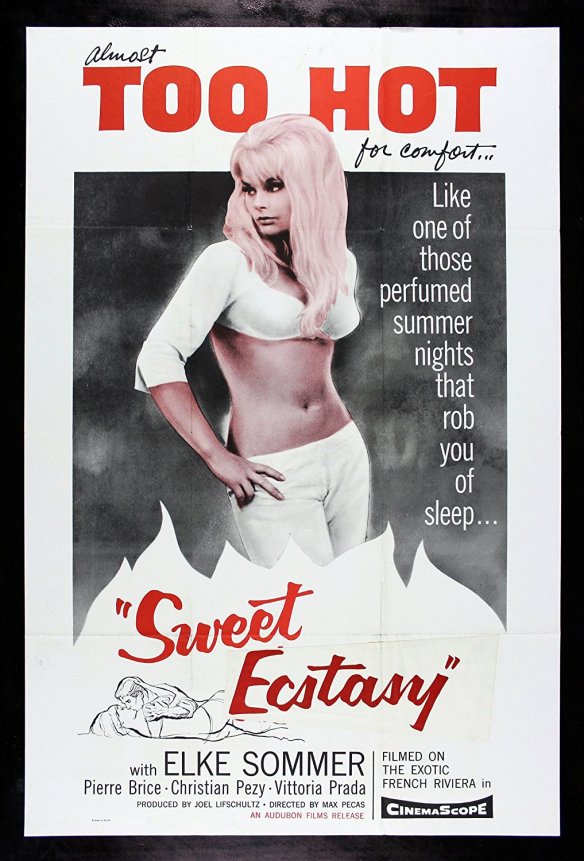 A special mention must be made of Heinz Pehlke’s black and white cinematography which gives Das Totenschiff a film noir-like ambiance, particularly the interior of the Yorikke with its steamy boiler room and sweat-soaked bodies. The atmospheric music score by Roland Kovac enhances the film’s sense of doom and menace but also provides a haunting harmonica theme mirrored by Lawski who occasionally plays the mouth harp. And the forbidding production design by Emil Hasler and Walter Kutz envisions the Yorikke as a floating death trip worthy of a horror film.

The crewmen of the Yorikke risk their lives working in hazardous conditions in the 1959 drama, Das Totenschiff.

Long after Das Totenschiff is over, moments from the film are certain to replay in your memory such as the scene where Gale first arrives on the ship and sees the sign over the cabin: “Who enters here will no longer have existence; his name and soul have vanished and are gone forever.” The assault on the alcoholic first officer Statter (Dieter von Keil) – he is thrown overboard – by Dils (Werner Buttler), the captain’s lackey, and Popoff (Panos Papadopulos), the ogre-like boatswain, is especially creepy. And the frantic key sequence where the captain and his two accomplices attempt to scuttle the ship and drown the crew so they can collect the insurance money without surviving eyewitnesses has a wicked twist ending. [Spoiler alert] Perhaps most haunting of all is the final shot in the film – a bird’s eye view of Gale, the only survivor of the ship, stranded on a piece of wreckage that is floating toward an endless horizon. Unlike All is Lost (2013), the grim survival at sea drama starring Robert Redford as a seemingly doomed sailor, there is no last minute rescue or closure to this tale of woe. 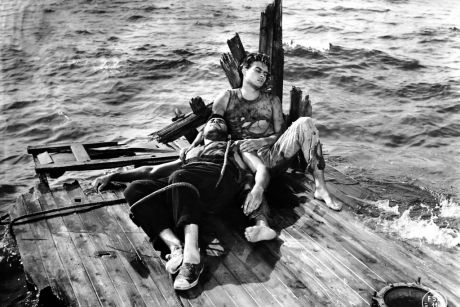 I first saw Das Totenschiff at the Film Society of Lincoln Center in New York which was hosting a repertory series entitled German Film 1945-1960 and also included such gems as Der Racher (The Avenger, 1960), an entertaining Edgar Wallace thriller featuring a young Klaus Kinski.

To my knowledge, Das Totenschiff has never been released on any format in the U.S. but you may be able to find a German import DVD through internet dealers. I was able to find a better than average DVD-R copy of it through European Trash Cinema but if you ever have the opportunity to see it on the big screen in a revival house or museum screening, you shouldn’t pass up the opportunity. It’s a neglected masterwork from a forgotten German director, the underrated Georg Tressler. 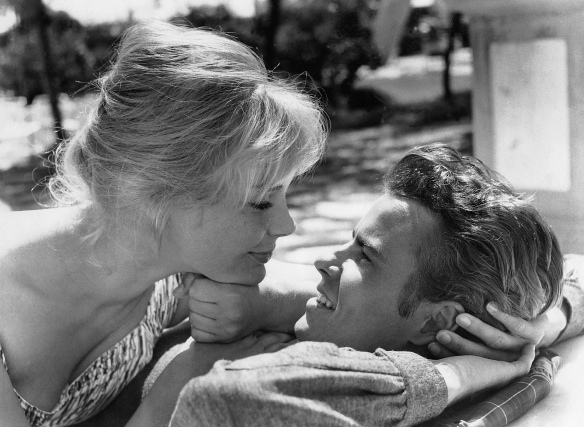 UFA: The Fall and Rise of the 100-Year-Old Production Powerhouse