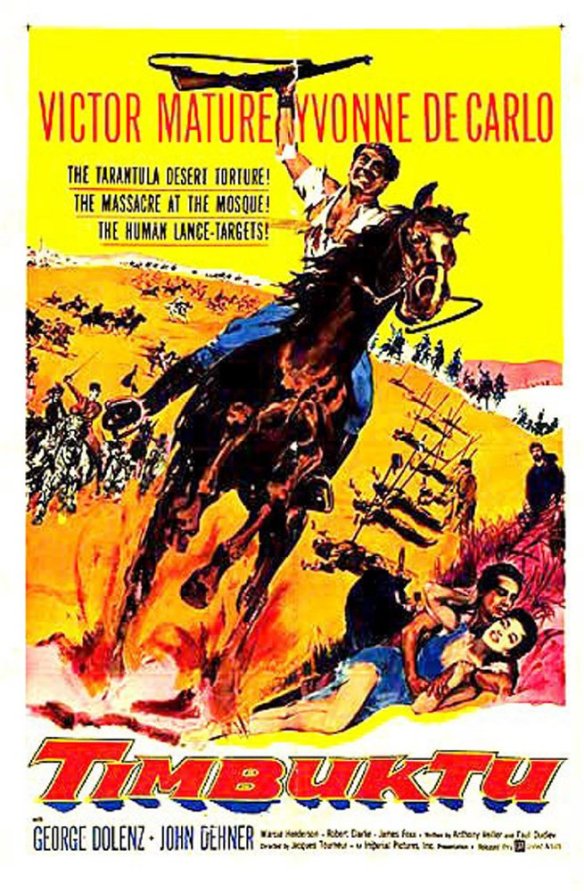 Tourneur’s work in the early to mid-fifties might not have matched his glory years at RKO but he still managed to turn out occasional gems like the underrated Joel McCrea western, Stars in My Crown (1950), a late period noir (Nightfall, 1956) and a cult horror classic, Curse of the Demon (1958). Even the less distinguished films from his final years are worth a look and Timbuktu (1958) is a genuine curiosity, flaws and all.

Victor Mature plays an arms dealer caught up in the intrigues of Timbuktu (1958), directed by Jacques Tourneur.

Synopsis: 1940, The French Sudan. While French forces are occupied at home with the invading German army, tribes of the nomadic Tuareg seize the opportunity to drive out the French colonial troops who occupy the garrison at Timbuktu. Caught in the middle of the skirmish is Mike Conway (Victor Mature), an opportunistic arms dealer from the U.S., who depends on both the Tuareg, under the leadership of the emir Ibn-Bahai (John Dehner), and the French officers, led by Colonel Dufort (George Dolenz), for his business.

Engaging his wife Natalie (Yvonne De Carlo) in a plot to entice Conway to aid their cause, Dufort’s main objective is to find and protect the Mohammed Adani (Leonard Mudie), a sympathetic French ally, who is in danger of being dethroned and killed by the xenophobic Ibn-Bahai. Conway puts aside his profiteering and self-interests for once and agrees to help Dufort by gaining the emir’s trust through his traitorous gun-running activities. His efforts to gain inside information for the French side not only puts Conway’s life on the line but also endangers Natalie, the real reason for his heroic actions.

American audiences are willing to accept almost anything in a Hollywood genre film within reason but Timbuktu (1959), directed by Jacques Tourneur, aggressively pushes the envelope with its exotic, studio bound sets, American character actors playing murderous Islamic rebels and some of the looniest pulp fiction dialogue of any B-movie of the fifties. 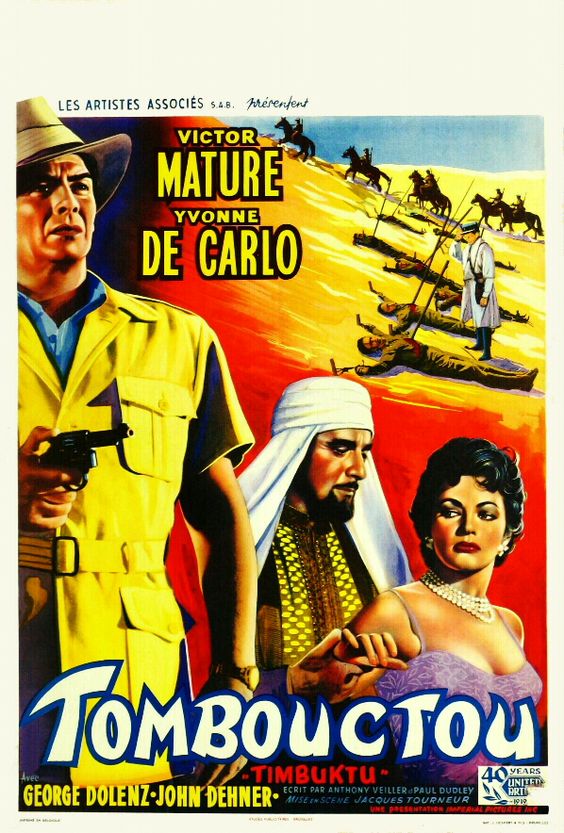 Tourneur’s best work was clearly behind him when he made this clichéd action adventure film but despite the low expectations of the project it has its diversions such as two imaginatively staged torture scenes involving tarantulas and a tongue-in-cheek performance from Victor Mature whose character prefigures the Indiana Jones figure from the Steven Spielberg films. The rest of the cast, however, plays it straight resulting in a film that veers between unintentional parody and colorless programmer.

Timbuktu wasn’t a particularly happy moviemaking experience for Tourneur who disagreed with his producer, Edward Small, over various aspects of the film. In the end, Small ended up removing his name from the credits but not before inflecting some wrong-headed creative decisions on Tourneur’s completed picture. The director later commented, “I had shot Timbuktu with Victor Mature, who isn’t a great actor, and the film wasn’t terrible. But the producer, feeling that the film wasn’t long enough, decided to shoot close-ups of extras with various expressions, which he inserted in certain sequences. So, suddenly, right in the middle of a battle, you saw more or less bewildered faces for long minutes. People must have said to themselves, ‘Tourneur has gone completely gaga.'”

Even if Small hadn’t sabotaged some of the film’s action sequences with his inserts, the often risible dialogue prevents Timbuktu from being taken too seriously. Take, for example, this exchange between Conway and Natalie on a moonlit balcony:

Conway: “You know, around here knives have a way of sailing through the dark and you’re a very attractive target.”

Natalie: “Uh, why the costume?” (referring to his Islamic clothing)

Conway: “I know it looks pretty silly but it’s much safer.”

Natalie: “Wouldn’t it be safer being in America?”

Conway: “And give up this golden opportunity to get rich?”

There are other equally show-stopping exchanges and quotable one-liners such as Mature announcing “I’ve got the holy man stashed” or provoking his torturer with “Bring on the spiders!” One would expect something a little more plausible from co-scenarist Anthony Veiller, who received Oscar nominations for his screenplays for Stage Door [1937] and The Killers [1946], and worked with director John Huston on four films, including his film adaptation of Tennessee Williams’ The Night of the Iguana [1964].

Just as damaging to the film’s credibility was a cast of swarthy-looking American extras, dressed up in robes and shoras, and pretending to be menacing Islamic fanatics. This foolishness was capped by having New York City native John Dehner play their leader. Dehner, who got his start as an animator at Walt Disney studios, switched to acting in the forties and played Palladin in the radio version of the TV hit, Have Gun, Will Travel and memorable supporting roles in such movies as 1958’s The Left Handed Gun (where he played sheriff Pat Garrett to Paul Newman’s Billy the Kid) and Anthony Mann’s Man of the West (1958). 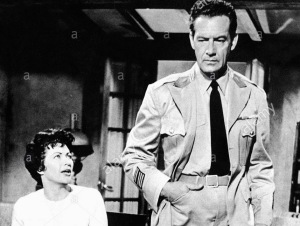 George Dolenz, cast as the stolid, duty-born French colonel, was a prolific character actor of the forties and fifties but his son, Mickey (of the TV pop group The Monkees), is the more famous family member. Also lurking around in a conspicuous supporting role and sporting a hideous scar that runs in a diagonal line down his face is Paul Wexler (he plays Suleyman) who looks like he wandered in from a Three Stooges costume spoof.

Wexler, who resembles a skinnier, more elongated version of that cult icon Timothy Carey, will be familiar to movie buffs who remember him from The Four Skulls of Jonathan Drake (1959) as a mad doctor’s native assistant with lips sewn-shut and other B-movies (The Bowery Boys Meet the Monsters [1954], The Kettles in the Ozarks [1956]). 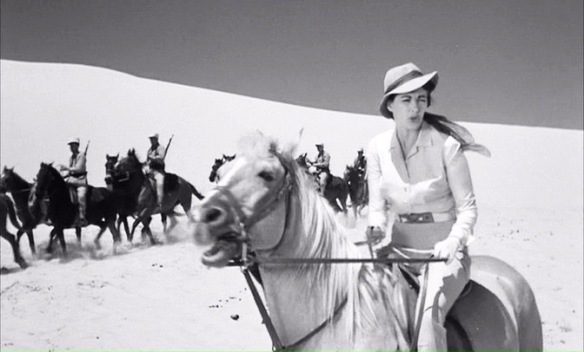 While Timbuktu was never meant to be anything other than a Saturday matinee potboiler and occasionally works on that level, Tourneur scholars and fans may find larger meanings here within the context of his entire career. It does share similarities with the ménage a trois set-up of his Great Day in the Morning [1956] and Appointment in Honduras [1953] and displays an obsession with time (a plot concern of Tourneur’s Night of the Demon [1957] and other films) from Conway’s self-engraved watch (“From Conway to Conway”) to the climactic race toward Timbuktu. The movie also traffics in its share of surreal metaphors, such as Conway substituting sewing machines for machine guns in one of his arms shipments. 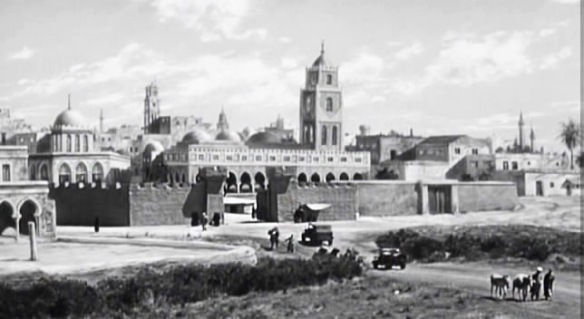 All of which inspired film critic/journalist Chris Fujiwara, one of Tourneur’s avid champions, to write, “Timbuktu is an absurd film but one that glows with a special, dismal negative splendor… Timbuktu marks the end of Tourneur’s Hollywood career, not because it is a summation….but because it continues…both the generic traditions of Hollywood cinema and Tourneur’s characteristically dry, disenchanted and aestheticized way of approaching them…For all its faults, Timbuktu remains a Tourneur work.” 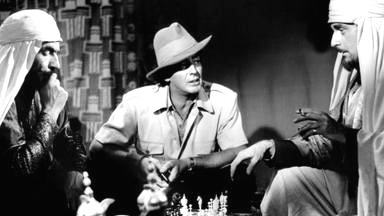 In 2012 MGM released a DVD-R of Timbuktu as part of their “Made to Order” line and it is a no-frills but first class transfer (nice image and audio). TCM has also aired the film before and may schedule it again someday. In fact, someone has posted the TCM version on Youtube (see the link below).

*This is a revised and updated version of the original article that first appeared on the Turner Classic Movies website.