Is there something weird in the water in Australia..or maybe the air is different? All I know is that that culture has produced some of the quirkiest and most unusual films of any country beginning in the seventies with such movies as Peter Weir’s The Cars That Eat People (aka The Cars that Ate Paris, 1974), Stone (1974), and Thirst (1979), and continuing through the ensuing decades with such cult items as Jane Campion’s Sweetie (1989) and Rolf de Heer’s Bad Boy Bubby (1993). More surprising is that a few have gone on to become highly profitable hits in the U.S. such as Baz Luhrmann’s Strictly Ballroom (1992), Muriel’s Wedding (1994), and The Adventures of Priscilla, Queen of the Desert (1994). But one of my favorites – Love Serenade (1996) – didn’t strike box-office gold like the above three titles. It’s a strikingly original black comedy for those who fancy that often unappreciated mixture of the macabre and the comical which is rarely executed with this much wit and verve. 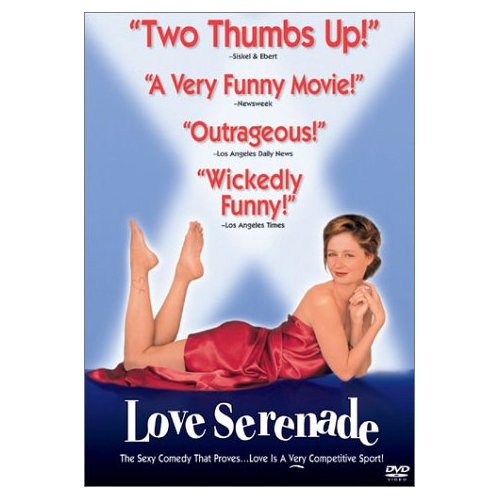 Distributed by Miramax Films, Love Serenade was unfortunately marketed as a romantic comedy. In the bland and misleading film poster a supremely confident, elegant Miranda Otto looks completely different from the awkward, socially inept creature she plays in the film plus she is not the central focus; the movie is about an oddball ménage a trois with the accent on oddball. Particularly inappropriate is the cover’s tagline – “The Sexy Comedy That Proves…Love Is A Competitive Sport!” 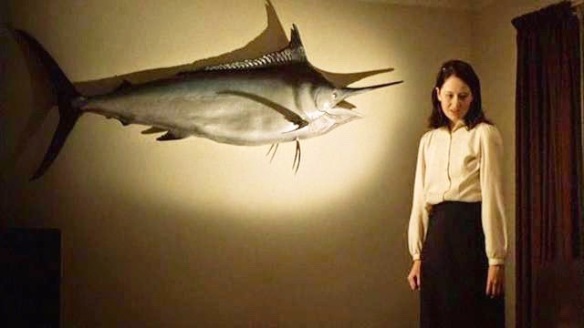 Dimity (Miranda Otto) finds herself strangely attracted to the new D.J. in town in Love Serenade (1996).

If anything, Love Serenade is the opposite of sensual and features possibly the most unsexy seduction scene of all time; Otto’s character undresses self-consciously before an impassive seducer with a giant stuffed marlin as a backdrop and almost topples over trying to remove her pantyhose. I guess the marketers figured the official poster would sell the film to potential viewers wanting a Meg Ryan/Sandra Bullock/Jennifer Aniston-type chick flick.

Directed by Shirley Barrett (making her feature film debut), Love Serenade had a brief run on the U.S. art film circuit in 1997 after winning the Camera d’Or at the 1996 Cannes Film Festival. Then it quickly vanished from sight despite rave reviews from several major critics. 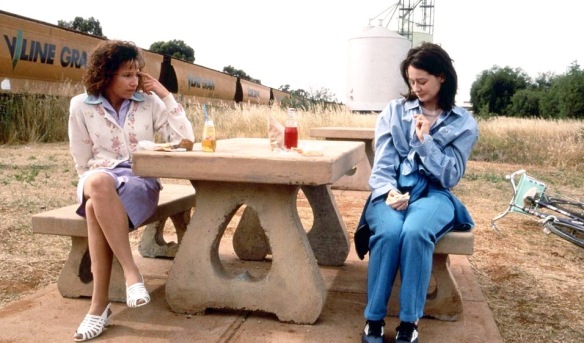 Rebecca Frith (left) and Miranda Otto play sisters and rivals for the mysterious new man in town in Love Serenade (1996).

The movie is set in a sun-baked, desolate small town in the Australian boondocks called Sunray (a stand-in for the real town of Robinvale in Northwest Victoria) that doesn’t show many signs of life apart from a few struggling businesses. Things perk up a bit with the arrival of a once-famous D.J. from Brisbane, Ken Sherry (George Shevtsov), who begins broadcasting from the local radio station, which is basically a run-down hut with no modern equipment. All the music is on vinyl and most of it is American pop from earlier years with a heavy playlist of Barry White tunes and such familiar top 40 classics as Van McCoy’s “The Hustle,” Billy Paul’s “Me and Mrs. Jones” and Gwen McCrae’s “Rocking Chair.” 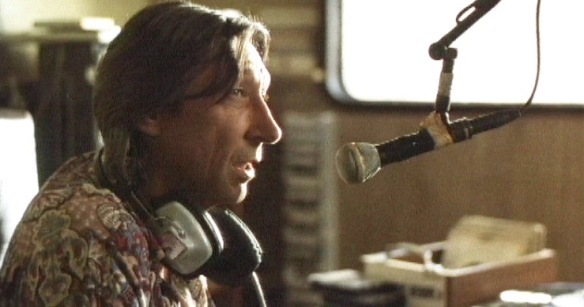 Sherry’s arrival is greeted with barely contained excitement by Vicki-Ann (Rebecca Frith), a hairdresser, and soon her waitress sister, Dimity (Miranda Otto) is equally bewitched and intrigued by Sherry’s enigmatic behavior and seductive, world weary voice. Not only does his presence unleash untold romantic fantasies in both women but it also creates tension and competition between them as they both vie for Sherry’s attention. 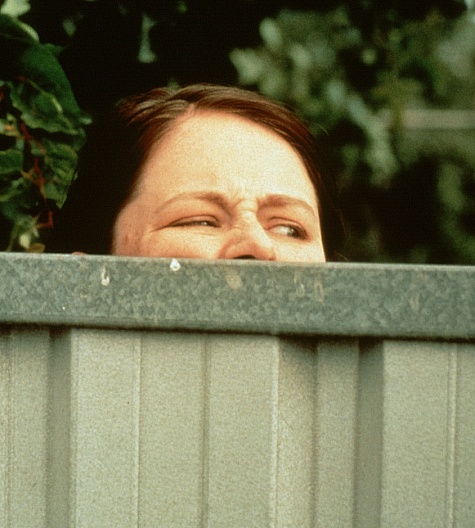 And what a prize he is! Homely in appearance with a hangdog face and a humorless, patronizing demeanor, he practices Tai Chi and favors hanging around in his bathrobe and slippers while dispensing Zen-like nuggets to his admirers. Director Barrett describes Sherry as “a kind of composite of every ‘Mr. Wrong,’” and he is the epitome of the boorish male. Yet, Vicki-Ann and Dimity are so starved and desperate for romance that Sherry is like some rare breed of exotic fish that has never been glimpsed in dreary Sunray. 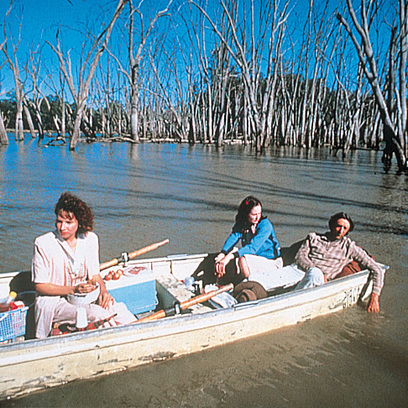 A strange sort of mating dance ensues as Sherry toys with the sisters and we get a glimpse of a claustrophobic backwater town stuck in time where nothing seems quite right. For instance, at the town’s sole Chinese restaurant, the proprietor/chief and part-time nudist (John Alansu), unexpectedly breaks into a heartfelt rendition of Glen Campbell’s “Wichita Lineman” at one point. While such a moment could fall horribly flat in the hands of a lesser director, Barrett manages to blend such fanciful conceits and eccentric behavior into a perfectly realized but stylized universe where anything can happen and does as you’ll see in the second half when Sherry appears to be mutating into something will gills. Yes, you read that right. 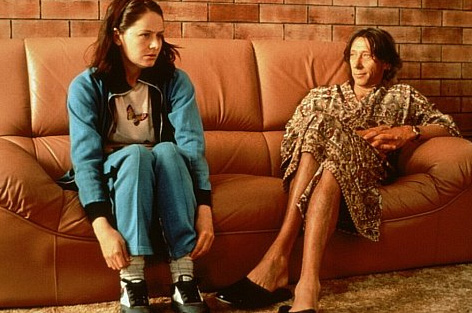 Despite the hilariously absurd arguments and confrontations between the two sisters and the increasingly bizarre developments with Sherry, there is a dark, underlying tone that gives way to complete fantasy in the final moments. You can see why the film wouldn’t – and didn’t – play well at the local cineplex where fans of rom-coms like You’ve Got Mail would have been baffled, if not completely irate at the outrageous resolution. 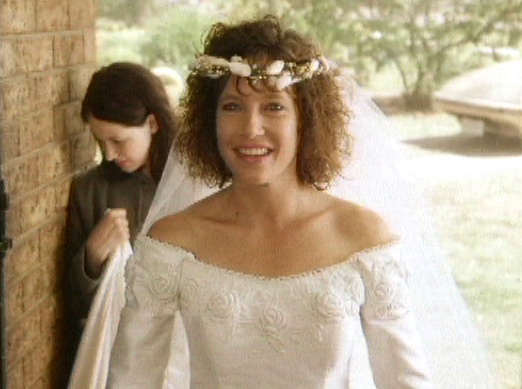 Vicki-Ann (Rebecca Frith) is in for a shock when she turns up at her fiance’s doorstep for their wedding in Love Serenade (1996); her sister Dimity (Miranda Otto) is in the background.

But like other Down Under faves like Strictly Ballroom, Love Serenade is infused with an irresistible quirkiness and Barrett’s use of Barry White’s music and other pop hits of the 70s as an extension of Sherry’s lounge lizard persona is inspired. “The Desiderata”, a popular but much parodied inspirational prose poem, also gets some airwave time. At one point Sherry even quotes from Charlie Rich’s sexual ballad “Behind Closed Doors” as if it were poetry (which, of course, it is). 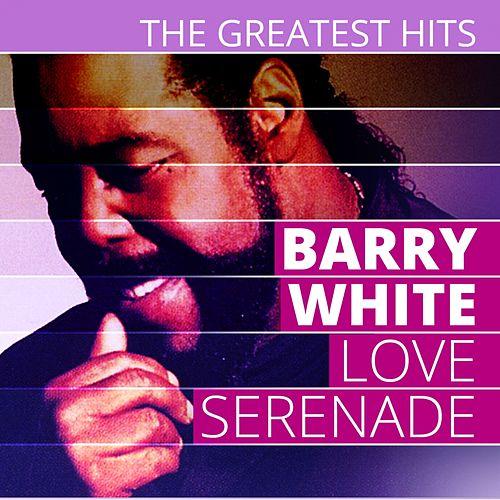 In an interview, Barrett referred to White’s famous ballad (thus the title of the film) as the “creepiest seduction song” ever and there is something undeniably mesmerizing about the combination of the lush orchestration and White’s deep, commanding voice, admonishing his lover with the line, “I don’t wanna see no panties.”  For those of you who don’t know the lyrics, here is the opening salvo:

Baby, take it all off

I wanna see you the way you came into the world

I don’t wanna feel no clothes

I don’t wanna see no panties

And take off that brassiere, my dear

I’m taking the receiver off the phone

Because baby you and me…

We’re gonna get it on

The cast of Love Serenade is uniformly excellent – Otto, Frith and Shevtsov were all well known stage actors in Sydney at the time – and most of the crew were women from cinematographer Mandy Walker to film editor Denise Haratzis to executive producer Jan Chapman (The Last Days of Chez Nous, The Piano, Holy Smoke). 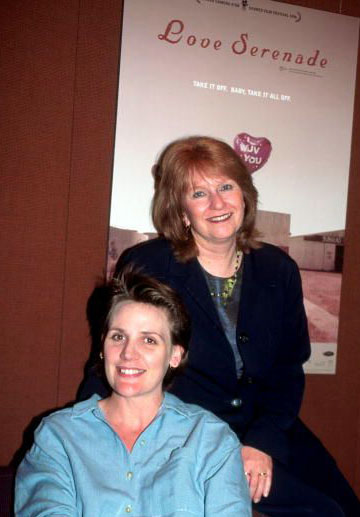 Shevtsov’s oily D.J. is so perfectly realized that his repulsiveness becomes magnetic and Otto’s Dimity is a good match displaying a peculiar naivety that may be masking mental instability. As for Frith’s performance as Vicki-Ana, she may seem like an overbearing caricature on first impression but watch how she changes emotional gears as her character plunges into uncharted territory with Sherry. John Alansu also gets to steal all his scenes in the supporting role of Albert Lee, the restaurant chef who takes an extreme dislike to the new celebrity in town. 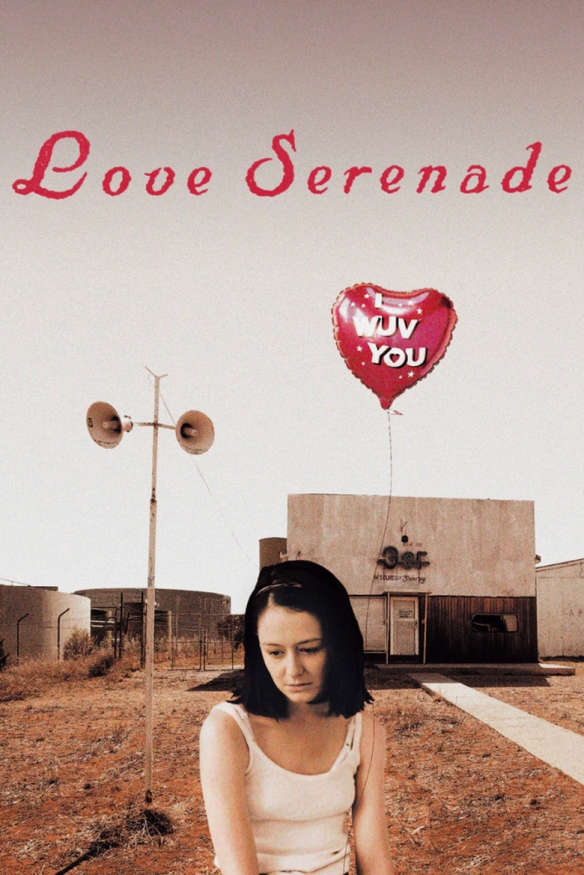 While some critics have made claims for the film being a feminist revenge fantasy, it’s much harder to pigeonhole than that since Vicki-Ann and Dimity aren’t exactly role models for independent women but more likely the product of their socially repressive environment in the Outback. Vicki-Ann thinks the way to a man’s heart is through his stomach while Dimity is willing to be molded like sculptor’s clay. Yet, like Shelley Duvall’s Millie character in Robert Altman’s 3 Women (1977), both women grow in the course of the film from being foolish and pitiful into sympathetic characters who grow closer as sisters in the process. I also think Love Serenade has the perfect ending, even if it could be considered misandry (the opposite of misogyny), but what’s wrong with that after hundreds of films where women are completely subservient and disposable to the male protagonist? Serve it up with subversive wit and style and you can get away with almost anything. 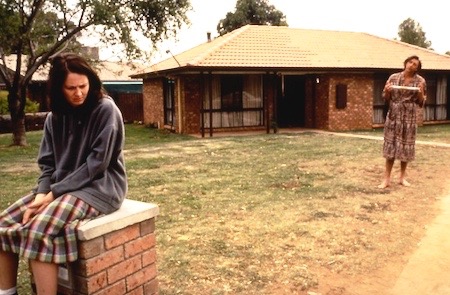 Barrett followed Love Serenade with Walk the Talk in 2000, which didn’t even receive a theatrical release in the U.S. But in Australia, it received even better reviews from the critics than Barrett’s first feature. Andrew L. Urban wrote “Walk the Talk is a brilliant film, at once funny and poignant – this year’s Muriel’s Wedding.” Louise Keller said, “Wonderfully offbeat with an acute sense of the ridiculous. Walk the Talk is the most enjoyable and accessible Australian film I’ve seen this year, and one whose magic will surely spread.” And finally Richard Kuipers stated, “In her 1995 debut, Love Serenade, writer/director Shirley Barrett displayed a striking feel for comedy and the pathos in her characters. Walk the Talk has similar strengths and a more rewarding story that makes this a more satisfying and entertaining outing.” 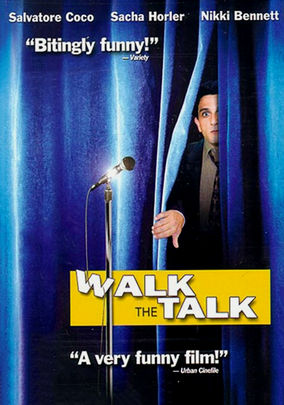 The plot of Walk the Talk focuses on an ex-con (Salvatore Coco) who reinvents himself as a talent agent. First, he becomes romantically involved with a paraplegic woman he meets at a revivalist church. Later he becomes obsessed with managing a-down-on-her-luck nightclub singer and finances the act with government compensation checks from the crippled girlfriend. Despite the downbeat description, I suspect that Barrett’s take on this is just as unformulaic and winning as her debut film. (Netflix still distributes Walk the Talk so rent it while you can). 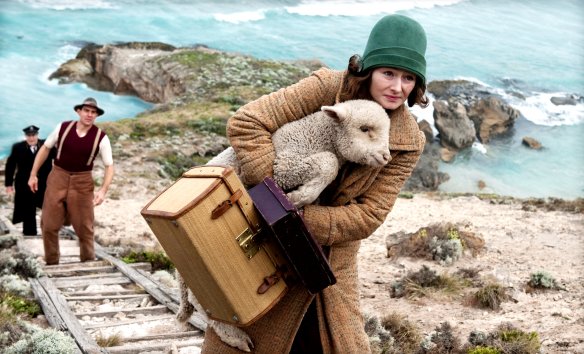 Mirando Otto plays the leading role in Shirley Barrett’s period drama South Solitary (2010) which is set on an isolated island in the post-World War I years.

After Walk the Talk, it would take Barrett ten years to come up with a follow up feature. South Solitary, released in 2010, provided Miranda Otto with a plum leading role as a single woman who is sent with her stern uncle to an isolated island circa 1918 to manage the lighthouse. The period drama was a complete departure from the director’s first two films and won critical acclaim in Australia with Otto receiving a Best Actress nomination from the Film Critics Circle of Australia. South Solitary also didn’t receive a theatrical release in the U.S. and it would prove to be Barrett’s final film to date. 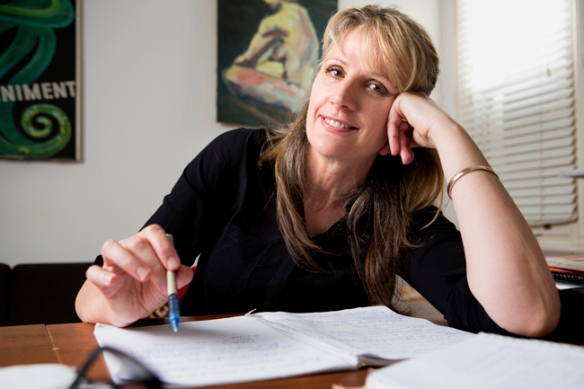 Despite this, Barrett has kept busy directing various episodes of Australian TV series such as House Husbands (2012), Mr & Mrs Murder (2013) and Love Child (2014). Her most recent television credit was helming episodes of A Place to Call Home (2015-2016). But she might be leaving TV and film behind for another career. Barrett recently published her first novel, Rush Oh!, which she describes as “a romantic comedy set against a backdrop of whale slaughter.” Most reviews have been extremely positive with Heloise Woof of The Independent, stating, “Humorous, imaginative and tender, you’ll want to race through Rush Oh! to find out what happens. But try, instead, to wallow in this tenderly created family portrait, whales and all.” Barrett is off to a promising start as a novelist and I suspect we’ll be hearing more from her in the near future. 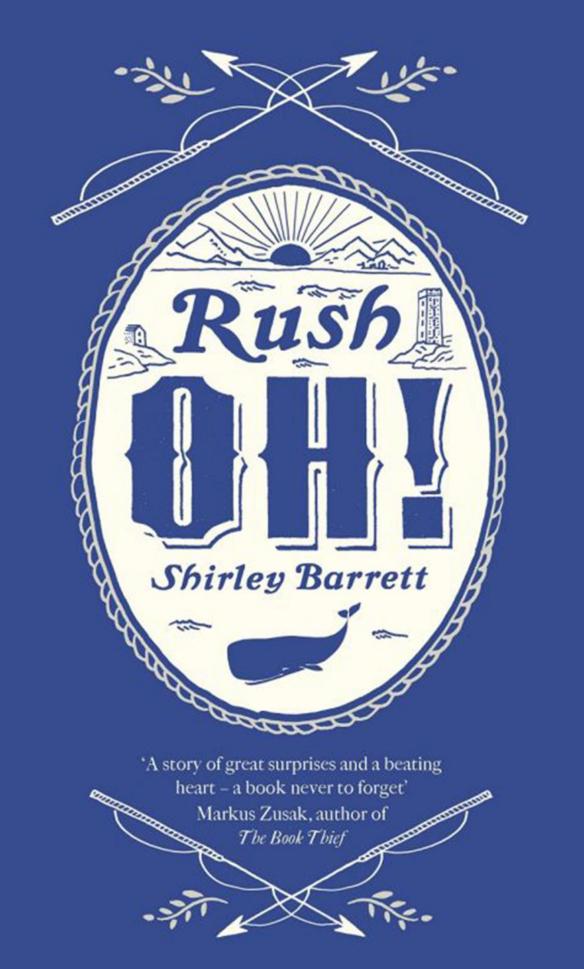 *This is a revised and updated version of an article that first appeared on Movie Morlocks, Turner Classic Movies’ official blog (it is now called Streamline).