Each year hundreds of international films never get picked up for distribution in the U.S. and the select few that do are either high profile film festival prize winners like Michael Haneke’s Amour (2012) or popular commercial hits like March of the Penguins (2005) from France and Life is Beautiful (1997) from Italy. So when you come across an austere and haunting cinematic work like Valerio Zurlini’s The Desert of the Tartars (Il Deserto Dei Tartari), you have to wonder how many great films from other lands are out there that you are not going to see…and probably never will. 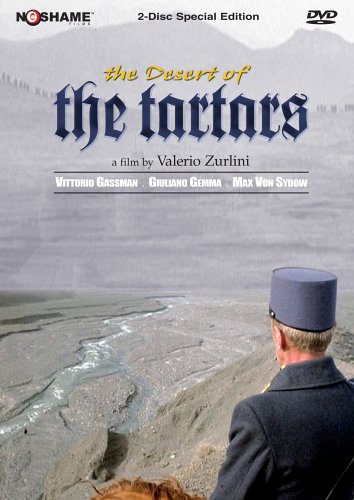 Although originally released in Europe in 1976, The Desert of the Tartars never had an official U.S. theatrical release but thanks to the Italian based DVD distributor NoShame, a 2-disc special edition of the film (which included the original soundtrack by Ennio Morricone) was released in 2006. Unfortunately NoShame went out of business the same year but during their brief operation they released an impressive number of Italian art films (as well as a slew of primo exploitation items) primarily from the sixties and seventies. And their restorations of three Valerio Zurlini films – Violent Summer (1959), Girl With a Suitcase (1960) and The Desert of the Tartars – led to a reassessment and appreciation of this often overlooked and forgotten Italian filmmaker. While Girl With a Suitcase did make the art house circuit in America upon its original release and is probably Zurlini’s best known movie, The Desert of the Tartars, his final work, might be his masterpiece. 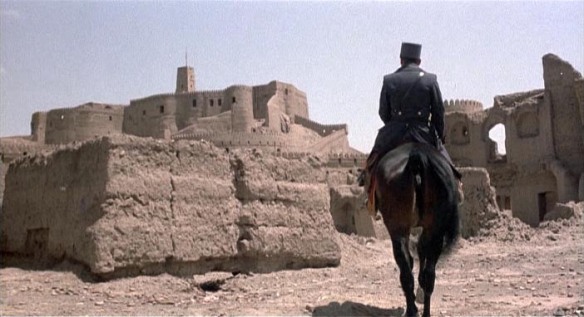 Jacques Perrin in The Desert of the Tartars (1976)

Based on the critically acclaimed 1940 novel The Tartar Steppe by Dino Buzzati, the story is set in 1907 and follows Drogo (Jacques Perrin), a young nobleman, who journeys to Bastiani, a remote fort in the desert on the edge of the Austro-Hungarian Empire where he will serve as a lieutenant in the army. What he anticipates as being a brief stay before being transferred to a more important post becomes an eternity of waiting as his youthful high spirits and career ambitions give way to ennui and despair. But, in the beginning, the peculiar behavior of most of his fellow officers combined with the fort’s hermetically sealed society are so puzzling to Drogo that he launches his own investigation into the matter. Drogo’s commanding officer, Major Mattis (Guiliano Gemma), is a rigid disciplinarian with a sadistic streak who enjoys tormenting Amerling (Laurent Terzieff), a sickly aristocratic officer. At the same time, Mattis is unable to command the respect or earn the promotion he desires from the fort’s commander, Count Filimore (Vittoria Gassman), whose agenda remains a mystery. Petty rivalries and power plays among the officers simmer under the surface and occasionally spill over into volatile confrontations. And a rare visit to their outpost by the army general (Philippe Noiret) convinces Drogo that his fellow officers are merely going through the motions of military protocol while they wait in vain for something to alter their destinies.

Among the other enlisted men are Nathanson (Fernando Rey), whose infirm condition has rendered him practically mute, Rovin (Jean-Louis Trintignant), the humane but detached garrison doctor, Tronk (Francisco Rabal), a gloom and doom agitator, and Lieutenant Simeon (Helmut Griem), one of the few soldiers to offer some amiable companionship in the beginning. And then there is officer Hortiz (Max von Sydow) whose sanity appears to be cracking after spending most of his career yearning for action in this godforsaken place. Drogo longs for adventure and purpose as well and eventually Hortiz’s stories of a phantom enemy, the Tartars, that dwell just beyond the sand dunes and the fort’s sight lines becomes an obsession for him. As he begins to see evidence of what he thought was Hortiz’s paranoia – a mysterious, stray white horse, flickering campfire lights in the distance – Drogo becomes convinced that an attack is imminent. Belief or denial in the existence of the Tartars becomes a constantly changing state of mind that is passed back and forth between the soldiers like a disease. By the time Drogo shows Hortiz a distant Tartar encampment through binoculars, the latter denies seeing anything and treats the younger officer as if he’s delusional. With the film’s final closing scene, it is unclear whether we are experiencing a mass hallucination of the soldiers or whether we have become infected by the madness that is Bastiani.

The Desert of the Tartars has a distinctly surrealist quality and the ineffective, repressed military figures on display are caught up in the same sort of meaningless rituals that consume the bureaucratic characters inhabiting the nightmare worlds of Franz Kafka’s The Trial and The Castle. Reputedly, Buzzati’s novel was inspired by his monotonous desk job on the night shift of a newspaper and by his former military experience. The DVD liner notes by Chris D. astutely notes that “the cosmic, Catch-22 senselessness of military conduct is pushed to new heights.” And one brief summary of the film as “Beau Geste meets Waiting for Godot” is completely apt. As you can see below, this concept was too difficult to convey in a promotional poster so one distributor chose to represent the movie as a conventional action genre entry.

Maybe one way to describe The Desert of the Tartars is to think of it as a historical epic in the tradition of a David Lean film but without the sweeping action sequences. This doesn’t mean Zurlini’s film is a dull, cerebral slog. Instead it maintains an underlying tension for its duration and occasionally erupts in violence – a returning soldier mistaken for a Tartar is shot for not knowing the password – or theater-of-the-absurd antics (a pointless march into a blizzard). The entire production is handsomely mounted, displaying a lavish budget that was well spent on a top tier, international cast, period costumes, Morricone’s elegant, melancholy score (which sounds like it was composed in an earlier era), and the stunning cinematography of Luciano Tovoli (inspired by the paintings of Giorgio De Chirico). 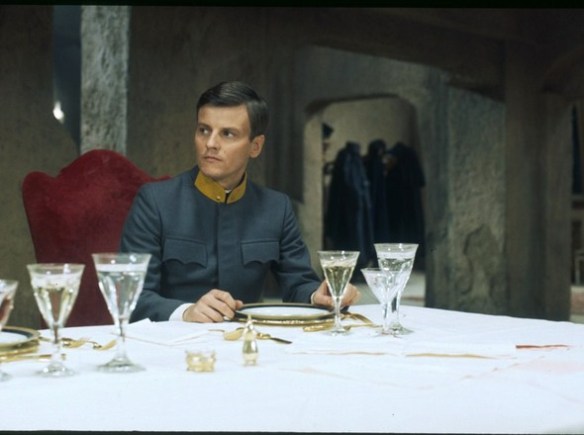 Jacques Perrin in The Desert of the Tartars (1976)

Jacques Perrin, who co-produced the film, makes an ideal Drogo, going from a proud young lieutenant brimming with idealism to an exhausted, gray-haired military careerist whose soul has been sucked out of him. Jean-Louis Trintignant is quietly effective as the army doctor who became resigned to his fate long ago, stating, “Here or elsewhere…we’re all somewhere by mistake.” 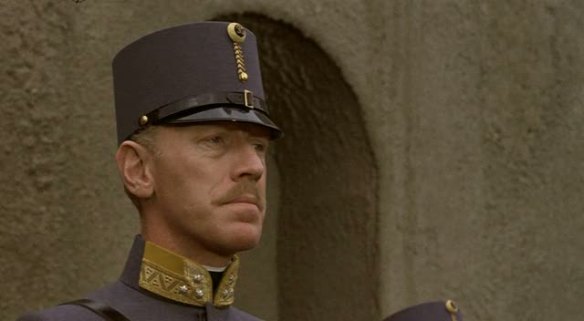 Equally impressive is Max von Sydow who brings an unexpected poignancy to his character, one that fluctuates between immeasurable loss and pompous superiority. He has a moment of self-realization in the final moments of the movie that speaks volumes for anyone who has not lived the life they wanted or intended: “Obeying is the thing I did best in my life. What nonsense and what disregard. I might have been useful in wartime. I’m so regretful. I waited for such a long time without knowing why.” 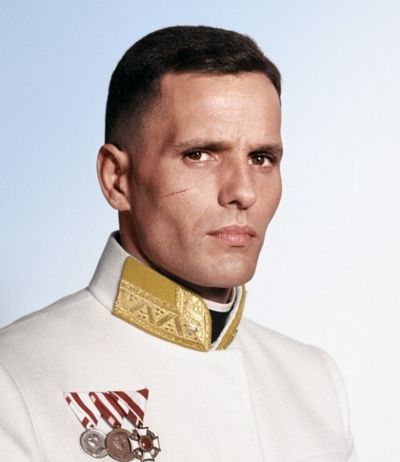 The real surprise among the international cast, however, is Giuliano Gemma as the cold, competitive Major Mattis. Gemma was a popular leading man in Italian cinema but was more often cast in undemanding action roles in sword and scandal epics (Messalina, Goliath and the Sins of Babylon), spaghetti westerns (Arizona Colt, The Return of Ringo) and adventures (Safari Express, Operation Leopard) than parts which required versatility and range. There have been memorable exceptions along the way such as Luchino Visconti’s The Leopard and Luigi Comencini’s tragic, working class romance, Delitto d’amore but Gemma is unexpectedly mesmerizing here as a cunning, power-hungry opportunist with fascist leanings (the boar-hunting scene with Drogo is particularly revealing). Critics took notice and Gemma won a special citation from the prestigious David di Donatello Awards for his performance as well as a Silver Ribbon nomination from the Italian National Syndicate of Film Journalists. 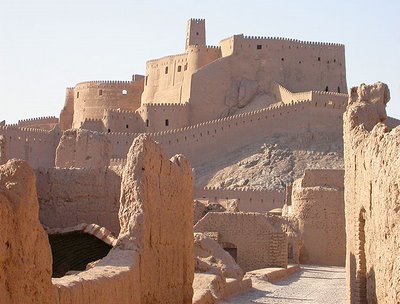 In the end, though, the entire cast is overshadowed by the true star of The Desert of the Tartars – the bleak but beautiful sun-baked desert setting and the imposing austerity of the Bastiani outpost. Shot on location in Iran, the film’s ancient fort (built before 500 B.C.) and its surrounding ruins is actually the Safavid Fort of Bam which was last used as an active military barracks in 1932.  Sometime in 1953, major restoration was begun on the fort in hopes of preserving its history and attracting the tourist trade but a major earthquake in 2003, destroyed much of the completed work and killed more than 26,000 people. Any further news on the fate of Safavid Fort of Bam is mere speculation but if you want to see the historic site and what once remained of its former glory, check out The Desert of the Tartars. It may still be available for purchase as an out-of-print double disc DVD edition from NoShame Films or as an import Blu-Ray but you will need an all region Blu-Ray player to view it.

Bam Citadel, Iran after the 2003 earthquake 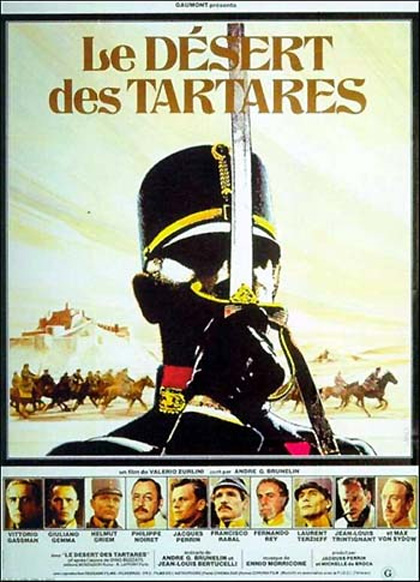 1 thought on “Faded Delusions of Grandeur: The Desert of the Tartars”