There is a popular misconception these days that almost any movie you want to see is available for streaming or viewing somewhere in cyberspace but that simply isn’t true. Thousands of films go missing, become inaccessible or go into distribution purgatory as the years pass and they become forgotten in time. Birds in Peru (aka Birds Come to Die in Peru) would probably be forgotten too if it hadn’t received such scathing reviews upon its original release in 1968.

A vanity project for novelist-turned-filmmaker Romain Gary based on his original screenplay, this would-be art film featured his wife Jean Seberg as a suicidal nymphomaniac languishing on a desolate beach in the Caribbean (it was filmed on the coast of Spain). It was considered a major debacle by most critics and has since vanished from sight (even though it was produced by a French subsidiary of Universal Pictures). But striking images and scene stills from it remain along with its infamous reputation (it received an X rating) which is reason enough for cinephiles obsessed with beautiful, doomed Jean Seberg to seek it out. Plus the movie features an impressive French supporting cast of Maurice Ronet, Pierre Brasseur and Danielle Darrieux as a brothel madam with cinematography by Christian Matras (Paris Blues, Cartouche, Bunuel’s The Milky Way). 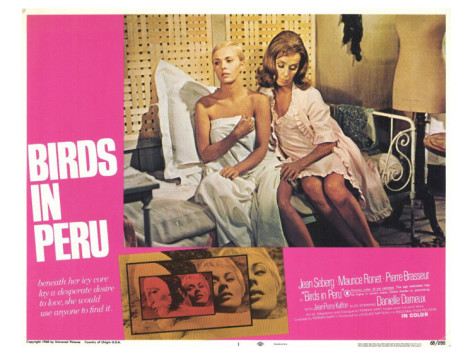 While I have no illusions about Birds in Peru being a lost masterpiece, Gary’s only other directorial effort entitled Kill! Kill! Kill! Kill! (1971), which also starred Seberg, is so seriously deranged and chaotic in terms of narrative coherence that I figure this earlier effort is worth a revival for the sake of curiosity. And Seberg still looks stunningly beautiful at this point in her career. While she might have been a limited actress in terms of her dramatic range, the actress managed to work with some of the biggest names and talents in the industry in her 22 year career. After her literal trial by fire debut in Otto Preminger’s universally maligned Saint Joan, Seberg fared much better in the vastly underrated Bonjour Tristesse (also directed by Preminger) and then reinvented herself as a Nouvelle Vague superstar in several French films such as the landmark Jean-Luc Godard debut Breathless (1960), Philippe de Broca’s Five Day Lover (1961) and Claude Chabrol’s Line of Demarcation (1966).

Possibly her finest performance was in Robert Rossen’s Lilith (1964) as a passionate, alluring mental case who entices staff therapist Warren Beatty into a complicated, destructive relationship. Seberg reached her peak as a Hollywood star in 1969 when she appeared in the George Schaefer crime drama Pendulum and the big budget musical Paint Your Wagon, opposite Clint Eastwood and Lee Marvin, followed by a major box office hit, Airport (1970). After that, it was a slow, sad descent despite such interesting later efforts as Juan Antonio Bardem’s offbeat serial killer thriller The Corruption of Chris Miller (1973), Hans W. Geissendorfer’s 1976 screen adaptation of Ibsen’s The Wild Duck and Philippe Garrel’s Le bleu des origins (1979), her final screen appearance (she died the same year, a suicide).

Seberg’s collaboration with her husband Gary, however, on Birds in Peru and Kill! Kill! Kill! Kill! marks one of the more extreme and unusual examples of a husband directing his wife on screen and maybe a reflection of their volatile offscreen marriage (1962-1970), a relationship that is documented in depth in David Richards’ biography Played Out: The Jean Seberg Story and dissected in Mark Rappaport’s fascinating reflection on the actress, From the Journals of Jean Seberg (1995) with Mary Beth Hurt acting as a self-aware stand-in for Seberg. While there are other Seberg films that I would love to see that are in danger of sliding into complete obscurity such as Jacques Becker’s crime caper Backfire (1964) with Jean-Paul Belmondo or Nicolas Gessner’s heist drama Un milliard dans un billiard (1965), Birds in Peru is like some exotic endangered species. Consider the below AFI synopsis of the film and excerpts from some of the movie reviews and maybe you too will be intrigued enough to join in the hunt for this elusive Eurotrash artifact.

In the early morning hours after a Peruvian carnival, a young woman named Adriana lies naked and exhausted on a lonely stretch of beach–the final resting place for dying gulls from the nearby Guano Islands. The night before, Adriana left her sadomasochistic millionaire husband and came to the beach with four costumed revelers with whom she hoped to find sexual fulfillment. Tormented by nymphomania, and knowing that her husband and his chauffeur-bodyguard will soon come for her, Adriana dresses herself and wanders into a beachside brothel owned by Madame Fernande. At first Adriana gives herself to the madame and offers to work for her as a prostitute but then changes her mind and returns to the beach. Remembering her agreement that the chauffeur could kill her if she ever succumbed again to her sickness, she attempts to drown herself, but she is rescued by Rainier, a poet and self-confessed failure, who runs a beach cafe that no one frequents. While they make love, Rainier implies that they could be each other’s salvation. His suggestions are interrupted, however, by the arrival of the chauffeur and the whisky-sodden husband, who have come to carry out the agreed-upon ritualized execution. Rainier intervenes and is knocked unconscious; a young Indian boy called Alejo, who has been following Adriana, leaps out from a hiding place and plunges a knife into the chauffeur. Ignoring the others, Adriana wanders off alone as her husband picks up the dead chauffeur’s cap and hands it to Rainier, who accepts it. As the two men set off after Adriana, the young boy races headlong into the sea. (Published in the American Film Institute Catalog 1961-1970). 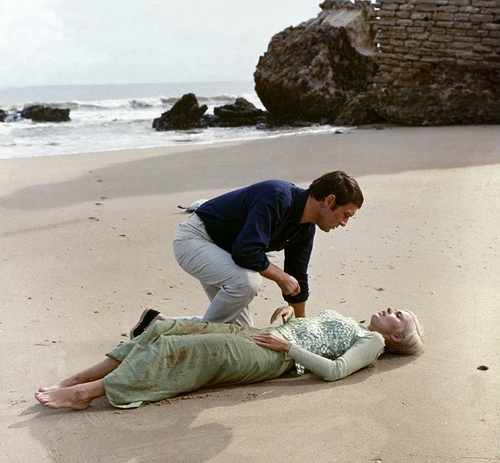 “The story goes that Gary wanted to direct this movie because he was so displeased by the two previous movies made from his books: “Lady L” and “Roots of Heaven.” Those were stinkers, yes. So Gary took his short story “Birds in Peru” and directed it himself this time. Now there are three stinkers made from his work….Gary holds his close-ups much too long, especially in the case of Miss Seberg; instead of providing dramatic impact and pacing, they drag the movie to a halt. Gary doesn’t like to move his camera much, either; his ideas of composing a scene are painfully elementary. Shots on the beach are invariably photographed by arranging his actors in a geometric pattern and having them march dreamily ahead.”

“The beach photography, by the way, was apparently meant to be surrealistic. We get long vistas of barren sand, with figures here and there in the landscape, old Peruvian masks and feathers and dying birds stuck in the sand, and strange rocks on the horizon, as if, this were a Salvador Dali retrospective. But none of it works. The movie doesn’t grow. The characters drift through their vacuum. Rarely has so much pretension created so much waste.”

“In an interview a year ago, Romain Gary, the French novelist, said he had decided to make his debut as a director with the movie version of his short story, “Birds in Peru,” because professional filmmakers had “slaughtered” his “Roots of Heaven” and “Lady L.” Even though I haven’t read the original story, I doubt whether Gary has actually slaughtered “Birds in Peru.” He just lets it drown—slowly and rather pleasantly—in a sea of literary symbols, prettily photographed on the coasts of Spain and Mauritania. The French movie, with English subtitles, opened yesterday at the Little Carnegie Theater. The story is the kind of cryptic, cleanly simple one that can be interpreted in as many ways as a horoscope….Jean Seberg (Mrs. Gary) is a lovely but not very interesting Adriana. Her perfectly molded face and body, which have the look of youth preserved in a deep freeze, are tenderly explored by a camera that never finds anything more than an actress in the throes of simulated emotion. When, in a tight close-up, she sticks out her chin and looks to heaven, she doesn’t resemble a woman lost to an empty passion as much as a little girl about to lose a spelling bee. That fine old performer, Pierre Brasseur (“Quai des Brumes”), is nicely menacing as Adriana’s husband who revels in her illness. But Maurice Ronet hasn’t much to do as the man who saves her, only to let himself become part of her ménage of masochists. Danielle Darrieux is seen briefly as the madame. As a movie director, Gary is a very good writer; funny and sardonic. However, the mind exhausts his visual images—lots of Hialeah-like pictures of birds—much more quickly than his literary ones and, in the process picks up a lot of nonessential information, such as the fact that no matter how many times Miss Seberg is seduced, her hair seldom gets mussed….It is, of course, somewhat revealing of Gary. In his loving exploitation of Miss Seberg, he seems just a bit like the husband in the movie.”

“Christian Matra’s photography emphasizes the strangeness of this uninhibited French film with its unearthly bird strewn beaches, its symbolism and its preoccupation with sex and death. Seberg’s acting is unrealistic and the film as a whole is unbelievable. The color film work is technically acceptable. The film does not possess art house qualities nor does it have a strong enough sex story for grind exploitation houses.”