When clowns are the main characters in movies, you can almost bet they aren’t going to be very funny (He Who Gets Slapped, La Strada, The Comic)…especially in a film by Alex de la Inglesia; this is the fantasist who gave us such outlandish spectacles as Accion Mutante (1993), Perdita Durango (1997) and 800 Bullets (2002). Similar in tone to his pitch black farce Muertos de Risa (1999), in which a two-man comedy act self-destructs in a bitter, homicidal rivalry, de la Inglesia takes this basic conflict and pushes it further into bloody madcap surrealism in The Last Circus (Spanish title: Balada Triste de Trompeta, 2010). It opens in the midst of the Spanish Civil War, circa 1937, as a circus clown, wearing a dress, is interrupted in the middle of his comedy routine and forced into service by the militia. Armed with a machete, he single-handedly massacres scores of Nationals before being captured by the opposition. Before he is executed, he is allowed to give some parting advice to his son Javier, who is so traumatized by the experience that it marks him for life. Though Javier vows to continue in his father’s line of work, he is incapable of playing the happy clown and finds his niche as a sad clown instead.

Flash forward to 1973 and The Last Circus becomes the story of a twisted menage a trois and its eventual implosion. At the center is Natalia (Carolina Bang, de la Iglesia’s companion in real life), a sexy trapeze artist who is married to Sergio (Antonio de la Torre), a sadistic, alcoholic brute whose public persona is that of a zany, fun-loving clown, beloved by children. The triangle is completed by Javier (Carlos Areces), the new circus recruit and fated whipping boy for Sergio’s slapstick routines. When Javier falls passionately in love with the manipulative Natalia and finds his inner beast, Sergio’s behavior becomes equally combative and builds to a battle to the death with Javier atop a tower in the sky. But the final showdown does not play out as expected in this emotionally volatile grand guignol.

A tale of hatred, jealousy, revenge, lust and longing carried to extremes, The Last Circus may be too over-the-top for some viewers but it’s one of de la Iglesia’s most imaginative if grisly offerings yet. And underneath the twisted humor and grotesque imagery, there is a sweeping tragic grandeur…something closer to opera than manic melodrama. In one of the most affecting moments in the film, Javier has a machine-gun freakout in a diner and stops abruptly when he hears a song playing on the jukebox, “Balada de la Trompeta,” a lush, romantic ballad (with traces of Ennio Morricone’s spaghetti western scores) sung with slowly building intensity by Raphael. The song has a transformative effect on Javier and becomes his theme song, expressing a lifetime of anguish, loneliness and dashed dreams.

Later, on a movie theatre screen, Javier sees Raphael performing the song as a clown in the 1970 feature film Sin un adios and it’s a mesmerizing “music video,” one that adds a much needed soulful resonance to de la Inglesia’s theatre of cruelty. It also provides a pop cultural touchstone for Spain’s past when Franco was still in power and Raphael was at the top of the charts as the country’s most popular singer. Despite de la Iglesia’s audacious cinematic style and flamboyant set pieces that includes Natalia’s tantalizing, gravity-defying nightclub act in front of a huge image of Telly Savalas (the name of the club is Kojak), it is the “Balada de la Trompeta” sequence that sticks in my memory with that song stuck on an endless loop in my brain. Haunting…but in a good way. 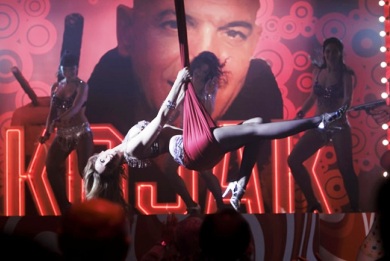 Raphael aka Miguel Rafael Martos Sanchez is internationally famous and probably the most popular Spanish singer of his generation during his peak years (1962-1984); in fact, he continues to perform today. But I had never heard of Raphael before I saw The Last Circus – he simply wasn’t on my radar. On the basis of this one song alone, I have sought out other Raphael recordings (“El Gondolero,” “Hablemos Del Amor,” and “Mi Gran Noche” are also recommended) and learned that the singer appeared in eight films between 1963 and 1973, formulaic musical romances or dramas which were designed to showcase his singing, not unlike the typical Elvis Presley formula. But Sin un adios, in which he appears in clown face to sing “Balada de la Trompeta”, is the one I want to see and it would make an ideal double feature with The Last Circus. 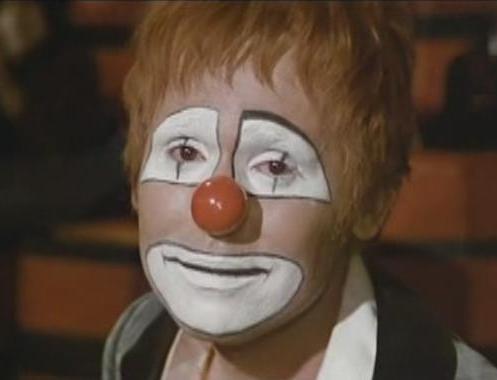 Meanwhile, fans of Alex de la Iglesia (including me) keep waiting for this director’s breakthrough film – the one that will finally earn him the sort of cult status and critical accolades that Quentin Tarantino, Pedro Almodovar, Peter Jackson, Guillermo del Toro and David Cronenberg enjoy. But maybe it’s better if he isn’t discovered. A big box office success could actually be a liability for such an idiosyncratic filmmaker and his one attempt at an English language feature – The Oxford Murders (2008) – was barely released here (after sitting on the shelf for two years) and not at all representative of his filmography. If you’ve never seen one of his movies, I suggest you start with his superbly crafted supernatural thriller The Day of the Beast (1995). If you like that, move on to the paranoid black comedy La Comunidad (2000) starring Carmen Maura (famous for her work with Almodovar) and then you might be ready for the roller coaster horrors of Perdita Durango or The Last Circus.

The Last Circus was released on DVD and Blu-Ray by Magnolia Films in October 2011 and you might still be able to purchase a copy from various online video sellers.

http://www.youtube.com/watch?v=wBAMkFg7DBo (a longer version of the Raphael song)