What do you get when you mix together a serial killer thriller, a May-December romance between an older woman and younger man and a masochistic mother-adopted daughter relationship melodrama with echoes of Now, Voyager (1942)? The result, The Night Digger (1971, aka The Road Builder), from a screenplay by Roald Dahl, is much more homogeneous than you’d expect and is an unjustifiably overlooked curiosity in the filmography of Patricia Neal. 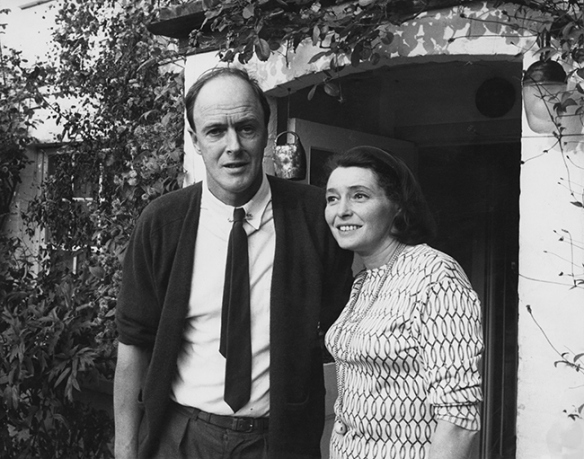 On first glance, the project would seem to be an unlikely project for short story writer and popular children’s novelist Roald Dahl (Charlie and the Chocolate Factory, James and the Giant Peach), who was married to Ms. Neal at the time but the bizarre imagination and black humor that made the Willy Wonka books so memorable soon emerges in this gothic tale set in a crumbling mansion in the English countryside. Edith Prince (Pamela Brown), the blind, elderly owner of the mansion, and Maura (Neal), live alone in a master-servant relationship that began years earlier when Maura had a stroke and Edith took her in and paid her medical expenses. Then the relationship reversed and Maura became the caretaker. Now middle-aged, Maura sees her chances for personal happiness slipping away until the arrival of Billy (Nicholas Clay), a young handyman who is hired against her wishes. At first suspicious and resentful of Billy, Maura soon finds herself falling in love with the strange but emotionally volatile man-child. Meanwhile, a serial killer is running amok in the countryside, raping and murdering women and burying their bodies in the path of a soon to be paved public highway.

Murdered women are being buried in the path of a new highway by a serial killer in The Night Digger (1971) aka The Road Builder.

Based on Joy Cowley’s novel Nest in a Falling Tree, Dahl agreed to write the screenplay as a showcase for his wife, who had returned to acting after recovering from a series of debilitating strokes in 1965. Part of the attraction for Dahl may have been the fact that the story’s protagonist was also a stroke survivor but more importantly, Neal hadn’t received any promising job offers since her post-stroke comeback film, The Subject Was Roses (1968), for which she received an Oscar nomination for Best Actress. Producers were afraid to hire her for health and insurance reasons. Luckily, funding for The Night Digger was secured, Alastair Reid was hired as director and an exceptional cast of British character actors assembled. 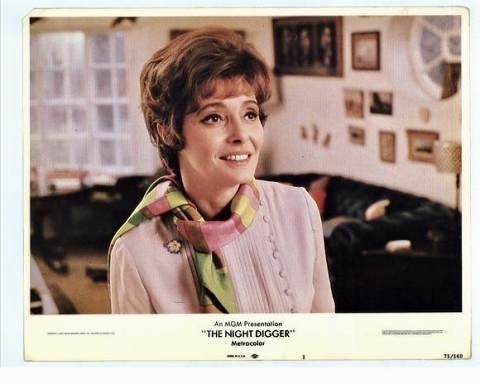 The filming of The Night Digger, which was mostly shot at Twickenham Studios and on an estate near Windsor on the Thames, proved to be an unpleasant experience for Neal. According to author Stephen Michael Shearer in his biography of Neal, An Unquiet Life, “…Patricia sensed that the cast and crew were against her. Some actors and the director himself made unkind remarks about Patricia behind her back. “Stroke survivors develop their senses, and I could hear their talk,” she would say later. After filming of The Road Builder ended, Patricia told American celebrity writer Rex Reed, “I don’t really care about making films now. I was so ambitious once. But I don’t really want to work. I would not care a lot if I don’t do another film. I’m just pleased I am married to the man who is my husband.” 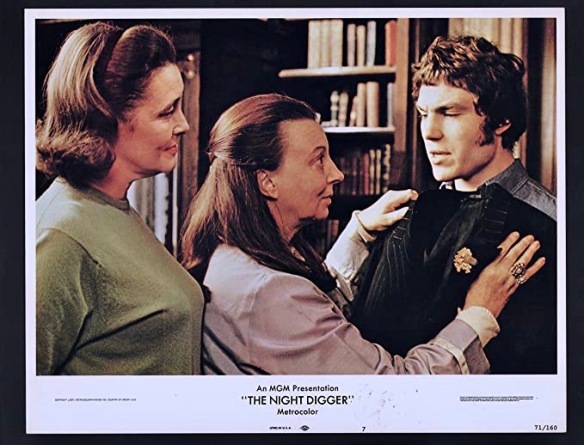 The Night Digger was an equally difficult experience for Dahl, who would completely disassociate himself from the project after its release. His biggest challenge was working with the brilliant but notoriously difficult and temperamental composer Bernard Herrmann whose contributions to the film were deemed as important as Dahl’s, if not more, by the producers. The collaboration began on friendly terms but soon deteriorated. According to director Reid (in A Heart at Fire’s Center: The Life and Music of Bernard Herrmann by Steven C. Smith), “…everything depended on whether Bernard wanted to do the music. When he first walked in to Twickenham, and I saw this big, gruff person with a Brooklyn accent, he immediately reminded me of a gangster from some Hollywood film. We ran the picture, and as the lights came up, Bernard’s one comment was, “You’ll have to change the ending.” “To what?” we asked – and he told us, although I don’t remember now how it differed from the film….There was never any money on that film, so even if we had a better ending we couldn’t have shot it. But Bernard said we had to go out and film new scenes…The producer and I eased our way out of the viewing theatre and asked ourselves, “Does he mean we’ve got to change the ending before he’ll do it?” We walked back into the theatre – and saw Bernard had had the projectionist rewind the film to the first reel and was already scribbling music down.”

Maura (Patricia Neal) is attracted to and suspicious of their new handyman Billy (Nicholas Clay) in The Night Digger (1971), directed by Alastair Reid.

The animosity between Herrmann and Dahl continued as the composer succeeded in having Dahl’s script pared down in order to emphasize his score. “This is Pat’s film!” Dahl told the mild-mannered Reid, a remark that sent Herrmann into paroxysms: “Do you think they’re gonna line up outside the box office in the cold and say, ‘Can I have two seats please for Pat’s film?'” 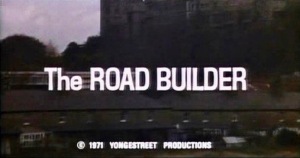 Herrmann’s comment proved to be prophetic as the film, which had the working title of The Road Builder but was released in the U.S. as The Night Digger, was quickly buried by MGM, in a limited theatrical release and shelved as a tax deduction. Reid later admitted, “Patricia Neal, Roald Dahl, and I were never paid a penny, since we all derred our payments to royalties…and to this day we’ve never received a penny. The only guy who came out okay was Bernard Herrmann, who insisted on money up front. And he was dead right.”

Billy (Nicholas Clay), Maura (Patricia Neal, center) and Edith (Pamela Brown) made an odd trio in The Night Digger (1971) from a screenplay by Roald Dahl.

The troubled production behind The Night Digger would seem to indicate that the film was destined to fail and it certainly has its flaws, particularly in trying to establish Billy’s sexual dysfunction, depicted in overstated black and white flashbacks. (Ten minutes of scenes with sexual content were cut prior to its release). The romantic relationship that develops between Maura and Billy and their idyllic escape to Cornwall also seems implausible. And when Neal and Dahl saw the completed picture they were disgusted with Neal saying, “It’s pornographic.” 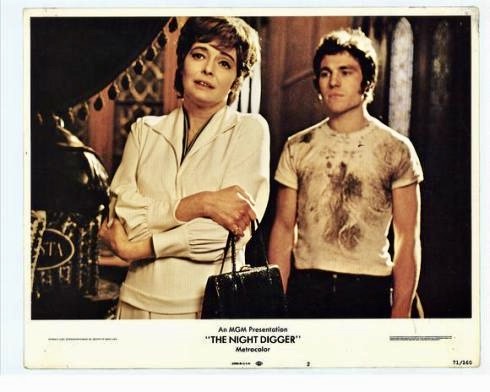 Critics weren’t much kinder with Variety proclaiming “The exercise is only moderately successful,” and The New York Times critic writing, “As a study of understated tensions, vague psychopathic sexuality and somber moods, the British made The Night Digger…proves to be more polish than persuasive drama.” But even a mildly dismissive review by the New York Daily News indicates both its peculiar appeal and why it was poorly received: “a strange tale that builds slowly to a tragic climax…[T]he tale is strictly for those with a taste for the perverse.”

Billy (Nicholas Clay) likes to strip naked and creep into the bedrooms of his intended victims and watch them sleep in The Night Digger (1971).

Indeed, The Night Digger is perverse. It is also richly atmospheric, genuinely creepy, oddly comic at times with macabre touches and is enhanced by Herrmann’s wonderfully evocative score which conjures up associations with some of his best work for Hitchcock but retains a distinctive autumnal mood of its own. The ensemble performances are also first rate with Neal and Nicholas Clay creating believable flesh and blood characters out of enigmatic stick figures, presented with little or no backstory.

Pamela Brown plays a blind, elderly woman who becomes fond of a young drifter in The Night Digger (1971), directed by Alastair Reid.

The real scene stealer though is Pamela Brown as the stubborn, willful matriarch of the mansion whose immediate empathy and attraction to Billy proves she is blind in more ways than one. The Night Digger would be Brown’s next to last feature film (she died in 1975); she was always more active in theatre and British television though most will remember her work with directors Michael Powell and Emeric Pressburger on three films, particularly her bewitching performance in I Know Where I’m Going (1945).

The Night Digger is clearly overdue for critical reassessment though at least TimeOut reviewer Bob Baker noted its virtues: “Starting as an analogue of Night Must Fall, Dahl’s script segues fascinatingly into areas explored contemporaneously in Chabrol’s Le Boucher. The contributions of [cinematographer Alex] Thomson, [art director Anthony] Pratt and Herrmann are exemplary…”

The Night Digger (1971) marked the first adult feature film role for Nicholas Clay (He had appeared in Joseph Losey’s These Are the Damned (1962) when he was a child).

Some other trivia of note: This film marked Nicholas Clay’s first major role (he had previously appeared in a minor part in Joseph Losey’s The Damned [1963]). He is probably best known for playing Lancelot in John Boorman’s Excalibur (1981). Unfortunately, he died in 2000 at the age of 55 from cancer.

Director Alastair Reid has focused on television work for most of his career with few film opportunities. He did attract some favorable attention for his lively exploitation feature, Baby Love (1968), in which Linda Hayden plays a sexually manipulative fifteen-year-old who maneuvers her way into an upper-class home to seduce and destroy all the family members. 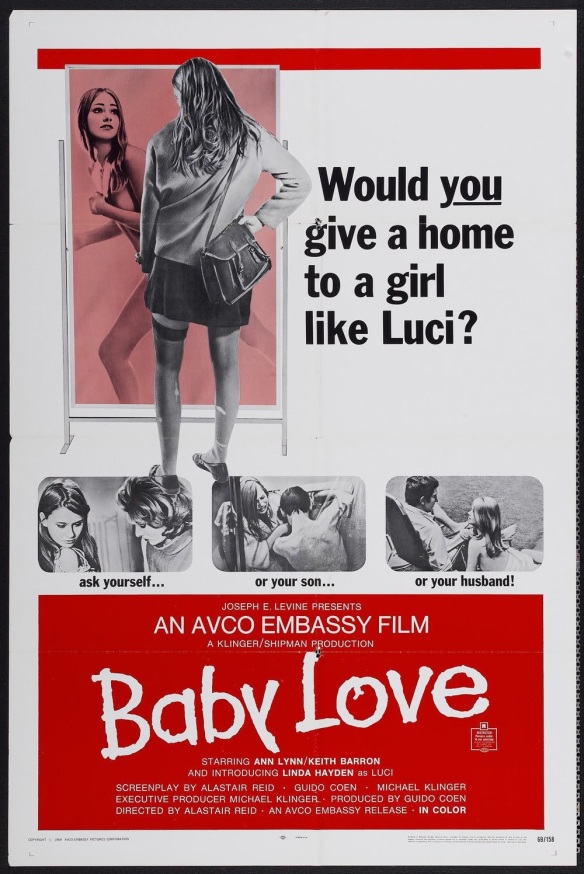 Interestingly enough, the premise of The Night Digger is somewhat similar to Emlyn William’s famous 1935 play Night Must Fall, which was adapted for the screen in 1937 and later remade in 1964. It told the story of a young woman and her aunt who befriend a charming stranger who later becomes a personal assistant to the elderly woman. At the same time, a local woman has gone missing and the police suspect foul play. Then, in 1973, yet another film appeared with a similar storyline entitled The Corruption of Chris Miller aka Behind the Shutters which focused on a tense relationship between a widow (Jean Seberg) and her stepdaughter (Marisol) living in the countryside. This unhappy duo is further tested by the arrival of a mysterious drifter (Barry Stokes) whom they hire as a handyman despite news of a murderer on the prowl. In comparison to The Night Digger, however, The Corruption of Chris Miller is much more explicit in its violence and eroticism. 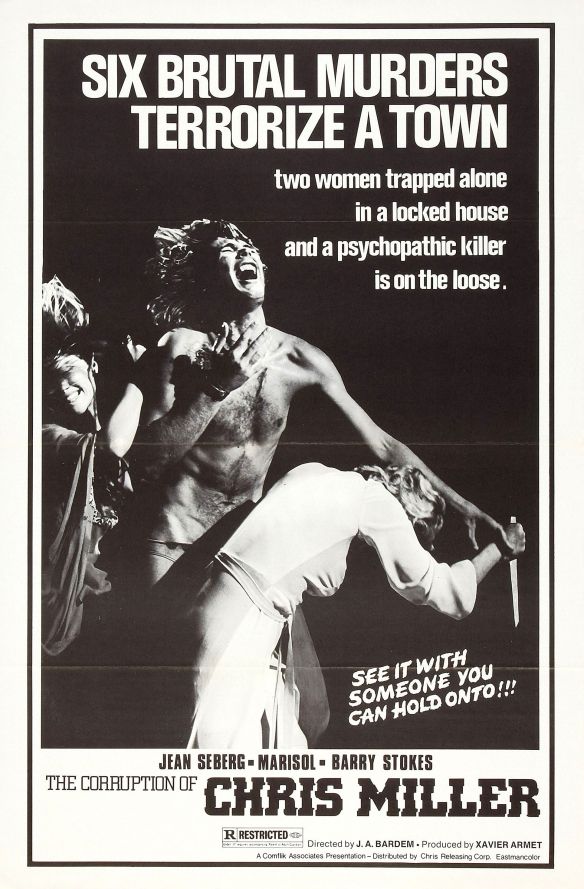 The Warner Archive Collection released The Night Digger on DVD in March 2011. The only extra was a trailer for the film but the film looked much better in its remastered presentation than it did upon its original release. A Blu-ray upgrade would be most welcome but I’m grateful this film is even available at all.