That unlikely combination in the header is just part of the quirky appeal of Lured, a 1947 mystery released by United Artists which is also equal parts comedy and romance. It was a remake of the French film Pieges [1939] by Robert Siodmak and starred Erich von Stroheim, Marie Déa and Maurice Chevalier. Most biographers of Lucille Ball and director Douglas Sirk have routinely dismissed it as an insignificant film in their careers but I think part of the problem was that critics and audiences expected a genuine thriller and got something else entirely. It is an eccentric original and highly recommended for anyone who wants to see Lucille Ball in one of her most underrated and accomplished performances; she plays dance hall hostess hired by the police as an undercover female detective and “bait” for a London serial killer.

Lucille Ball meets an eccentric photographer (Boris Karloff) during her undercover work to find a serial killer in Lured (1947), directed by Douglas Sirk.

Lured also has one of the most delightful ensemble casts of any forties movie with Boris Karloff providing the comic relief in a send up of his own horror film persona. As a mad-as-a-hatter dress designer who stages fashion shows for an imaginary audience and his dog, he practically steals the movie. There is also George Sanders as a hobnobbing playboy entrepreneur with a reputation as a lady-killer, Sir Cedric Hardwicke as his anal-retentive business partner, Charles Coburn as a Scotland Yard inspector with a mind like a steel trap, George Zucco as an intrepid detective in disguise, Alan Mowbray as a suspicious high society butler with a side business in the white slave trade and Joseph Calleia as the brains behind the latter operation.

George Sanders and Lucille Ball star in the offbeat mystery thriller with a touch of comedy, Lured (1949).

What is most interesting about Sirk’s direction of Lured is his decision to play up the red herrings in the script to such an absurd degree that they overshadow the initial premise…but it’s actually part of the film’s odd appeal. It begins with an opening set-up of the anonymous murderer who preys on young, single women he contacts through personal columns and then sends poems by Baudelaire to Scotland Yard to announce his latest victim. Then the film shifts the focus to Lucille Ball as Sandra Carpenter, a working class showgirl stranded in London after her show from the states went bust.

Sirk parades Ball through a series of misadventures before finally circling back to the serial killer in the final third of the film. But we don’t care because we become more interested in the eccentric personalities on display and the mystery becomes secondary which was probably Sirk’s intention. In fact, you’ll probably be able to guess who the murderer is after his first introduction as a suspect.

Lucille Ball sets herself up as a lure for a serial killer in the Douglas Sirk film Lured (1947), co-starring George Sanders (far right).

Ball’s performance here is somewhat reminiscent of her brassy, aspiring actress in Stage Door but displays a wider range of emotions, shifting easily from witty repartee with George Sanders to a worried but game acceptance of her undercover activities to panic when she is finally cornered, all of which is accomplished without the broad comic theatrics of the character she would play on her popular I Love Lucy show. Her scenes with George Sanders in particular have a spark to them and their chemistry together is so potent that it’s a shame they weren’t paired together as a team for other movies. Offscreen Ball and Sanders got along famously too, leading to rumors that they had an affair during Lured.  “Although Lucille would deny it over the years,” according to Kathleen Brady’s biography, Lucille: The Life of Lucille Ball, “Zsa Zsa Gabor, who married Sanders a few years after her divorce from Conrad Hilton, was certain they had an affair. Zsa Zsa became suspicious when she picked up an extension phone at his home to hear Lucille demanding, “What are you doing with that Hilton woman? You know I know you. She’s too young for you!”

It looks the perfect sort of night for a serial killer to strike in the offbeat mystery thriller Lured (1947), directed by Douglas Sirk.

Ball has rarely looked more glamorous than in Lured, due in large part to William Daniel’s lighting and camerawork. This was the famous MGM cinematographer who lensed most of Greta Garbo’s features (Anna Christie, Camille, Ninotchka, Anna Karenina, etc.) and many with Norma Shearer (A Free Soul, Marie Antoinette, Romeo and Juliet), Jean Harlow (Dinner at Eight, Personal Property), and Margaret Sullavan (The Shopworn Angel, The Shop Around the Corner, The Mortal Storm). 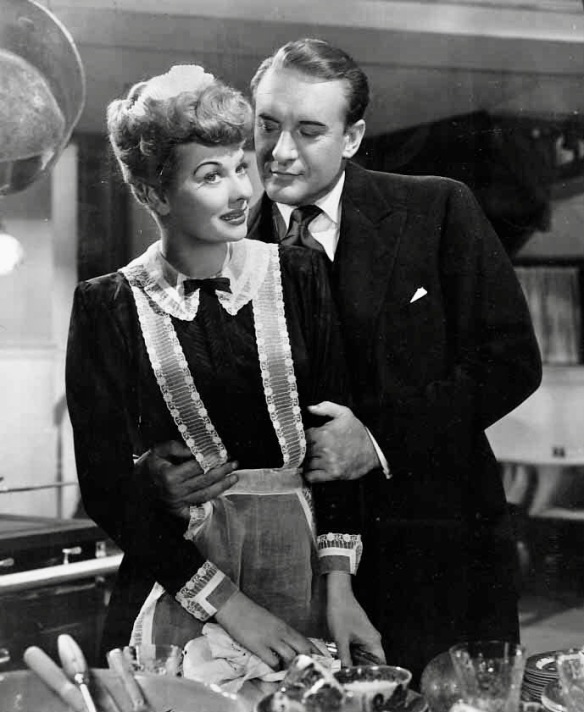 Lucille Ball, pretending to be a housemaid, is romanced by playboy George Sanders in Lured (1947),

The other major MGM connection behind the camera on Lured was producer Hunt Stromberg who began working at Metro-Goldwyn-Mayer in the silent era and helped shape the first four installments of The Thin Man series whose mixture of crime, comedy, romance and witty dialogue is duplicated in this 1947 effort. Stromberg left MGM in the early forties to pursue a career as an independent producer and some of these later efforts included such crime and noir thrillers as Lady of Burlesque (1943), Guest in the House (1944), The Strange Woman (1946) and Too Late for Tears (1949). 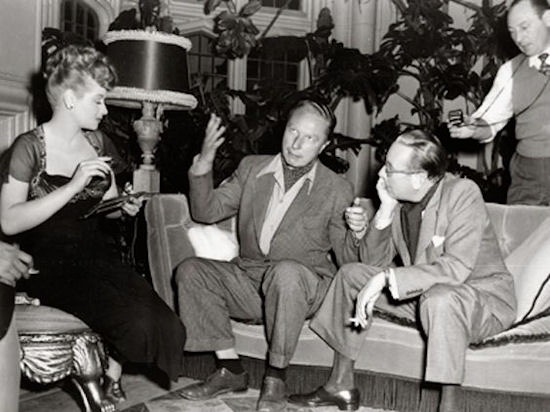 On the set of Lured (1947) with Lucille Ball, director Douglas Sirk (center) and Sir Cedric Hardwicke.

Despite the mediocre performance of Lured at the box office, Sirk was obviously fond of the movie as evidenced by his comments in Sirk on Sirk: Conversations with Jon Halliday. The director recalled “I got on well with Hunt Stromberg, the producer. He liked my direction, and he gave me a very free hand, on the cutting and everything. I also had a great art director on this picture – Remisoff, a Russian. He did an expert job. And this was the first time I worked with Bill [William] Daniels, a very good cameraman. The cast was right. I tried with Karloff to do something like I had done with [Edward Everett] Horton in Summer Storm, and Karloff was very pleased with the role. It was a bit the same with Charles Coburn, who was considered a comedy actor, and this gave the part of the detective an added quality, with his bonhomie. Lucille Ball, too, was known as a comedy actress. Here…I think I got some irony into the character, and some of the shifting identity…: all three of them seem to others to be something different from what they really are. In the casting I was operating on a two-layer principle. And it was my first attempt at a crime picture.” 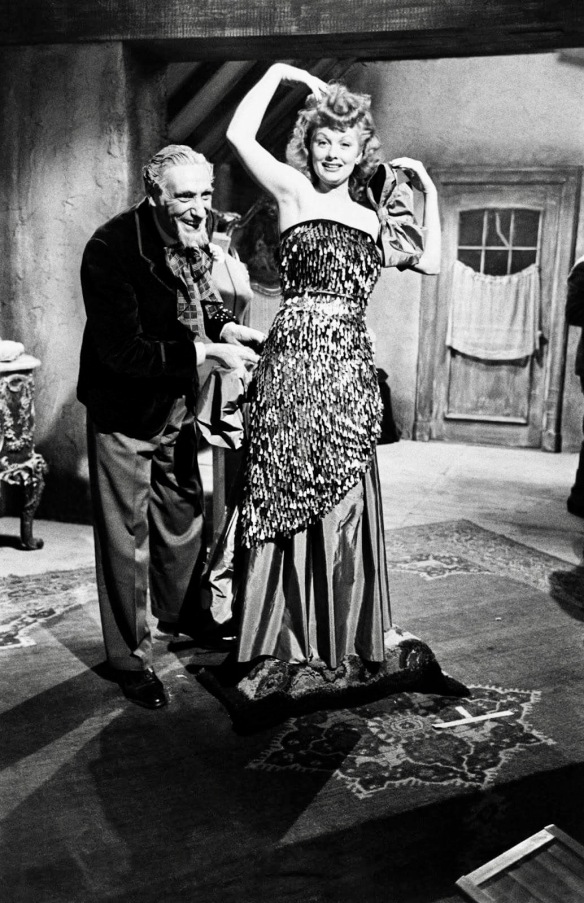 Lucille Ball models one of her period costumes on the set of Lured (1947), a mystery thriller directed by Douglas Sirk.

After Lured went into release, United Artists had second thoughts about the title and changed it to Personal Column. Sirk commented, “They changed the title during the run in America as well. Lured was a great title, it has a sound to it. The picture had been doing very well, and the change ruined the run. Personal Column sounds like Hedda Hopper [Hollywood gossip columnist] to me. Stromberg wanted something ‘more dignified.’”

The film has since reverted to its original title and is currently distributed on DVD by Kino International. It is an acceptable print but a better option came along in June 2019 – a blu-Ray of Lured from the Cohen Media Group which pared it on a double bill with Douglas Sirk’s A Scandal in Paris. The Cohen Media Group blu-ray is definitely an upgrade in picture and sound quality but Lured could still use a Criterion quality remastering. 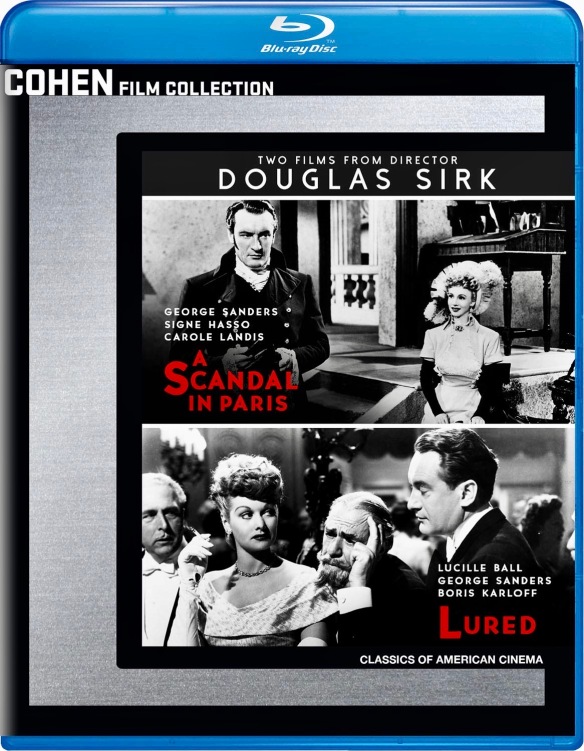 Perhaps Criterion’s Eclipse label could do a boxed set of the lesser known Sirk films during his early years in Hollywood – Summer Storm, A Scandal in Paris, Lured and Sleep My Love. Meanwhile, don’t miss this offbeat little gem when TCM airs it on Monday, October 5th, 2020 at 6 pm ET. 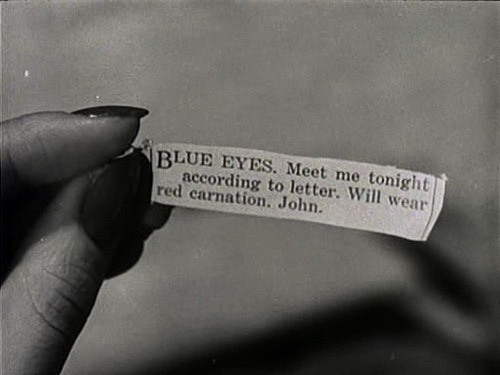 A personal ad from a wanted serial killer hopes to attract a new victim in Douglas Sirk’s Lured (1947).