How much of your identity is reflected in the clothes you wear? For some, fashion is the truest form of self-expression. It is who you are…or who you want to be. Some of the greatest fashion designers of our time have stated as much while offering other reasons for why it is important. Alexander McQueen said, “Fashion should be a form of escapism, and not a form of imprisonment” and Coco Chanel once remarked, “In order to be irreplaceable one must always be different.” This is certainly something to mull over while watching Quentin Dupieux’s dark, twisted fable, Deerskin (French title: Le Daim, 2019), which isn’t really about fashion per se but self-expression, creativity and being different are clearly part of the film’s thematic interests. 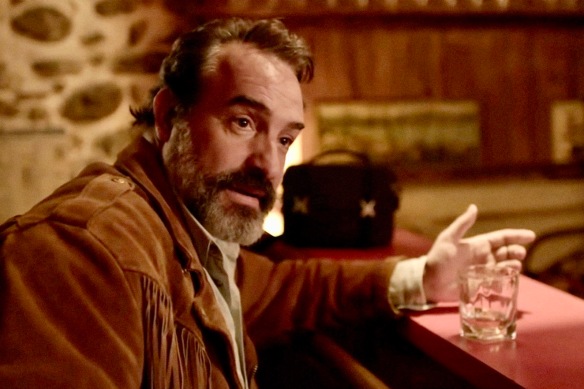 Georges (Jean Dujardin) is recently separated from his wife and pretending to be somebody he is not in Deerskin (2019), a bizarre black comedy from director Quentin Dupieux.

Deerskin has a lean, mean narrative structure that first introduces us to Georges (Jean Dujardin), a man we know nothing about yet he slowly comes into focus as he embarks on an improvised journey of self-discovery. The first sign that something is off kilter is when Georges tries to flush his green jacket down the toilet in a convenience store and ends up flooding the bathroom. Then we see him sleeping in his car by the side of the road and later driving deep into a remote mountainous area (it was filmed in the Vallée d’Aspe in the French Pyrenees). What has brought him here?

His destination is the rural home of an elderly man who is selling a 100 percent deerskin jacket, made in Italy. “Meet the beast,” the seller announces as he displays the item. He also confesses the jacket is out of fashion and it made him itch but Georges is awestruck. He pays the man all the money he has, which is still short 200 Euros, but the seller is delighted to have hard cash and even throws in a digital video recorder in the deal. [Spoiler alert] 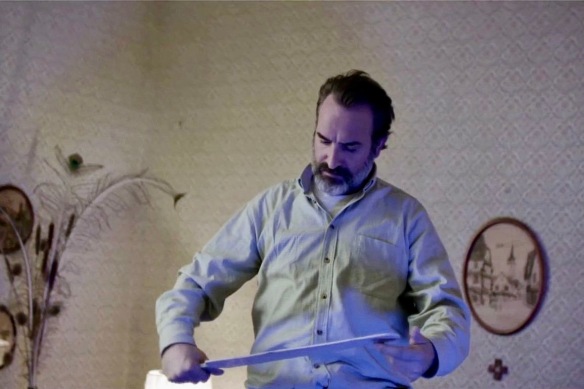 Georges (Jean Dujardin) pulls down a ceiling fan and begins sharpening the fan blades – but for what purpose? in Deerskin (2019).

The deerskin jacket does indeed become a beast in a metaphorical sense as Georges becomes obsessed with it. Posing with the jacket before a mirror, he exclaims, “Stoking! Killer Style!” Never mind, that the jacket is too short for Georges’ stocky body and exposes his midriff. Soon, he begins talking to it and eventually he imagines the jacket is talking to him. Georges becomes convinced that the deerskin has transformed him into a new man, one who is admired and envied by everyone he meets. Then his alter ego – the jacket – emerges and convinces Georges the only way to maintain their exalted position is to eliminate all other jackets. Thus begins an impossible goal that Georges struggles to achieve against all rationality.

Deerskin is no ordinary tale of a man having a mental breakdown. Even as the film moves into increasingly darker territory and appears to be settling into a predictable storyline about a budding serial killer, Dupieux continually thwarts viewer expectations with unexpected twists and turns along the way. You could say the film is a black comedy but it is too odd to fit neatly into that category. This is Theatre of the Absurd territory and realism is replaced with Georges’ delusional view of himself and the world. If you can go with the flow, you’ll probably find Deerskin an enjoyably strange and immersive experience. But others may reject the film as a cinematic hoax that outstays its welcome or a thin premise without a purpose. 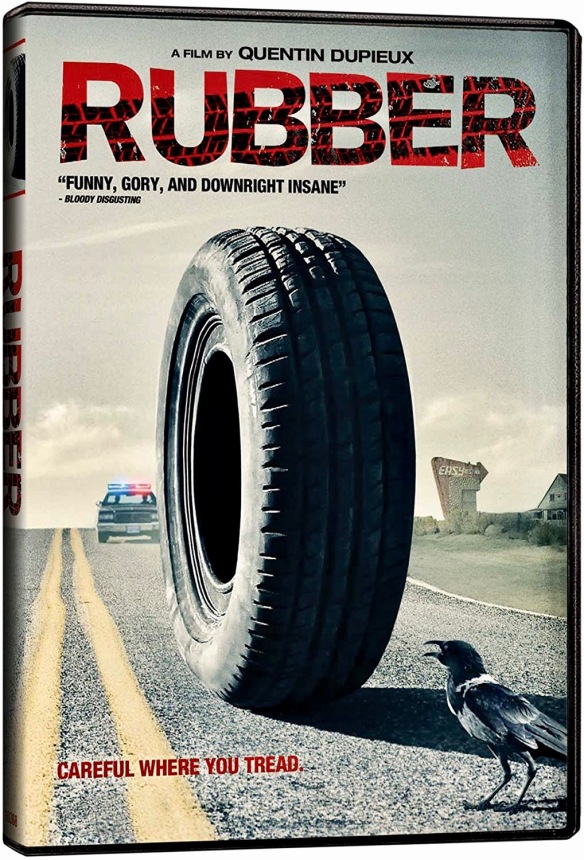 Deerskin marks the eighth feature film from Quentin Dupieux but the French director is hardly a household name in the U.S. If he is known for anything at all, it is probably his third film, Rubber (2010), which is about a car tire with telekinetic powers that goes on a homicidal rampage (It can make heads explode). Despite an eighty-two minute running time when sixty minutes would have been too long, Rubber does have style to burn and is actually a commentary on the act of watching a movie but most reviewers found it too nonsensical to warrant serious analysis. Deerskin is a much more accessible viewing experience but whether it will reach its intented audience is unclear since the U.S. distribution was interrupted by the COVID-19 epidemic. 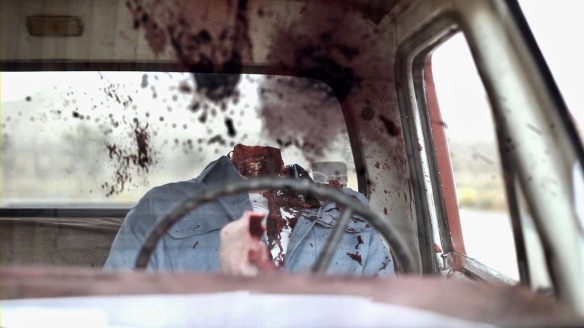 One of the famous exploding head scenes from Rubber (2010), Quentin Dupieux’s saga about a killer tire with telepathic powers.

Dupieux, formerly known as the electronic music composer DJ Mr. Oizo, is not out to merely prank the audience but to explore and push the boundaries of what a film can be. In an interview with Cineuropa, he discussed the genesis of Deerskin: “I first wrote it in English for an American actor I know, thinking I could make a really grotesque film, and it was almost just a big skit. The project stayed in my hands because I felt it was missing a little something. One day, I rewrote it in French, and that’s when I shaped its depths a little more, when I added lots of human parameters that I necessarily master better in French. And it became Deerskin, which to me is a film about gentle madness and mostly about freedom: what do we do with our freedom?”

One of the main strengths of the film is Jean Dujardin in the role of Georges. Best known for his Oscar-winning Best Actor performance in The Actor (2011), Dujardin is generally thought of as a comedic actor, thanks to delightfully silly films like OSS 117: Cairo, Nest of Spies (2006) and its sequel OSS 117: Lost in Rio (2009). Yet, Dujardin is equally effective in dramatic roles such as the espionage thriller Mobius (2013) and The Connection (2014), in which he plays a drug-busting zealot based on real life French magistrate Pierre Michel. In Deerskin, the actor brings a much-needed deadpan quality to the protagonist, one who is alternately menacing and ridiculous but also invites the viewer to follow his crazy sense of logic.

Jean Dujardin as French prosecutor Pierre Michel in The Connection (2014).

“There were actually two driving forces that led me to this role,” Dujardin said in an article on the France Today website. “One was the idea of escape from reality, the other the fantasy of becoming completely anonymous, of losing yourself. I realised that I had to shut myself down for this part and regress into an almost animalistic state. I eat, sleep, contemplate a brook, hunt.” The result is a performance that makes Georges’ madness grounded in some kind of reality, even if the behavior of those around him seems implausible, especially Denise (Adele Haenel), a waitress in a bar who aspires to be a film editor. 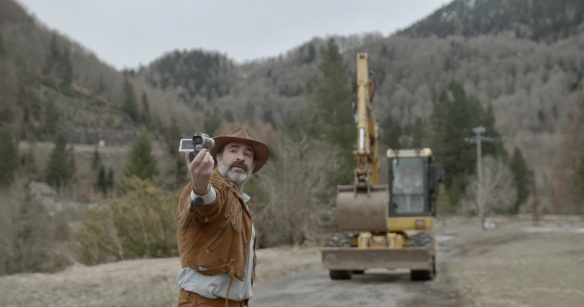 When Georges lies about his identity and says he is a filmmaker, he backs up his claim by showing Denise his digital recorder and eventually enlists her as his editor. She freely admits she re-edits famous movies to make her own versions, citing Pulp Fiction as an example where she changed Quentin Tarantino’s non-linear structure and sequenced the film in chronological order! Once she starts editing the odd bits and pieces that Georges has captured on his camera – scenes where the jacket is the central character – she becomes intrigued and excited at the possibilities. In the end, what seemed like her naivete or even a dim-witted nature is exposed as something much more cunning, not unlike the psychotic Tuesday Weld character in 1968’s Pretty Poison, who outwits her deluded mentor Anthony Perkins.

Denise (Adele Haenel) and Georges (Jean Dujardin) plan to do some location shooting for their film project in Deerskin (2019).

In the closing moments of Deerskin when Denise puts on Georges’ jacket, it becomes clear that a circle has been completed and Georges’ obsession has unleashed the auteur director in Denise. In fact, the mysterious opening scene involving three actors, jackets and a car trunk and the final sequence of deer running free in the woods might be from Denise’s official edit of Georges’ would-be masterpiece.

Denise (Adele Haenel) is a bartender with a secret desire to be a film editor and maybe more in Deerskin (2019).

For film buffs, the cinematic connections and references in Deerskin are clear and plentiful from the video documentation of serial murders in Henry: Portrait of a Serial Killer (1986) and the misanthropic satire Man Bites Dog (1992) to the voyeuristic point-of-view of Peeping Tom (1960) to the surreal ambiance of David Lynch’s Blue Velvet (1986). At the same time, Deerskin marches to its own weird drummer and is a genuine original, love it or hate it. 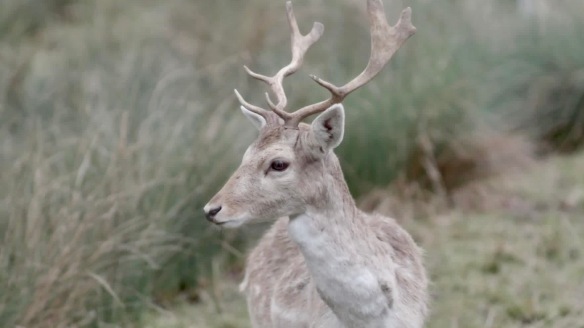 You can’t make a movie called Deerskin without showing some real deer, can you?