Among the many peculiar assemblages of cast and crew in Hollywood history, Pretty Maids All in a Row (1971) is in a class by itself. A black comedy set in a California high school where someone is murdering female students, the film marked the U.S. film debut of French director Roger Vadim (Barbarella, 1968) with Star Trek creator Gene Roddenberry producing and writing the screenplay. Mix in a number of seasoned Hollywood professionals (Rock Hudson, Angie Dickinson, Roddy McDowall, Keenan Wynn, William Campbell) with a hip, younger cast of aspiring actors and starlets. Top it off with a music score by Lalo Schifrin (Mission: Impossible, 1996) and a theme song co-written by Christian music mogul Mike Curb and sung by The Osmonds. And the result is a delicious guilty pleasure for some and a cringe-inducing embarrassment for others. There is no middle ground here unless you choose to view the film as a sociology experiment. 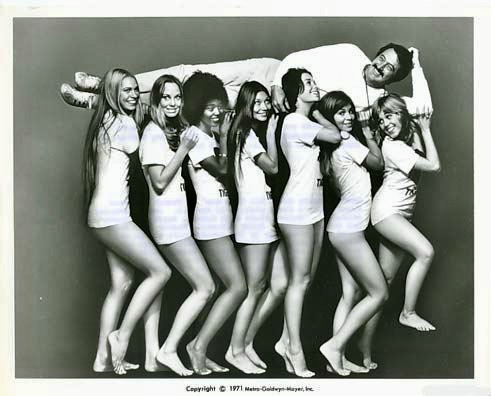 Publicity shot of Rock Hudson being carried by his young female co-stars in Roger Vadim’s Pretty Maids All in a Row (1971).

In a sly bit of casting, Rock Hudson plays “Tiger” McDrew, the high school football coach and guidance counselor who enjoys countless private liaisons in his office with selected female students. When the affairs get too serious or threaten to involve his wife, he terminates them abruptly – usually by strangulation. Yet, despite his busy schedule, he still finds time to mentor a few promising students and his current protégé is Ponce (John David Carson), whom he is grooming to be his future vice principal. But first “Tiger” wants to address Ponce’s “sexual problem” (priapism, a constant state of erection), a situation soon remedied by the substitute teacher Mrs. Smith (Angie Dickinson). The remainder of Pretty Maids All in a Row follows Ponce’s sexual awakening and the ensuing police investigation of the school murders, led by Telly Savalas in his pre-Kojak period. 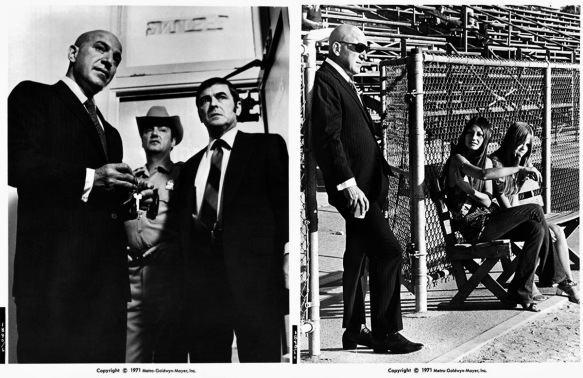 Film stills featuring Telly Savalas as an investigating cop in the softcore comedy-murder romp, Pretty Maids All in a Row (1971).

While neither completely successful as a murder mystery or satire of high school life – George Axelrod’s Lord Love a Duck [1966] was much sharper – Pretty Maids All in a Row does work on the level of softcore erotica which is no surprise considering Vadim’s expertise in that area. But the chic, high-class decadence and art-house respectability of previous Vadim features such as Les Liaisons dangereuses (1959) and La Ronde (1964) is completely missing here. Instead, Pretty Maids All in a Row is crass, overstated, infantile and enormously entertaining at times for all the wrong reasons. It’s as if Vadim is reflecting his own impressions of American society back at us in this sex-obsessed fantasyland where the California sun overwhelms everything, muting all the colors and subtleties of life.

Director Roger Vadim in a publicity photo from the MGM film, Pretty Maids All in a Row (1971).

More than anything, Pretty Maids All in a Row espouses the Hugh Hefner Playboy approach to life and is unapologetically sexist in every male-female encounter in the film. When the camera isn’t ogling female breasts and buttocks, it’s reveling in visual metaphors for sex; Ponce’s orgasmic night with Miss Smith cuts to an early dawn shot of dozens of lawn sprinklers erupting in fountains of spray. Angie Dickinson, prior to her TV fame as “Pepper Anderson” on Police Woman (1974-78), has rarely looked sexier than she does here, and she brings a tongue-in-cheek humor to her clichéd and admittedly thankless role as the older woman responsible for Ponce’s initiation into manhood. As for the “pretty maids” of the title, none of them are developed as characters but they were never meant to be more than eye candy in their short skirts and braless tops.

In his autobiography, Memoirs of the Devil, Vadim recalled the casting of the students in Pretty Maids All in a Row: “…I had auditioned over two hundred boys and about the same number of girls. Most of the girls who applied were aspiring actresses, though some were students who merely found the whole thing amusing. For a man recovering from lovesickness [Jane Fonda had just divorced Vadim], this succession of young beauties should have been an excellent tonic. It was not unpleasant, of course, but I have never believed in strength in numbers.”

Assistant principal/football coach Tiger McGraw (Rock Hudson) escorts a high school student at the funeral of a former classmate in Pretty Maids All in a Row (1971).

At the time Rock Hudson made Pretty Maids All in a Row, his film career had completely stalled. The multimillion dollar box office bomb Darling Lili with Julie Andrews hadn’t helped matters and neither had the Italian-produced war adventure, Hornet’s Nest (both 1970). He was just a year away from his successful transition to television with the hit series McMillan & Wife but he was no longer a guaranteed box office draw – Jack Nicholson, Dustin Hoffman and Ryan O’Neal were the rising new stars. Regardless of his circumstances, Hudson gives a surprisingly relaxed, vanity-free performance as “Tiger.” The actor was not exactly in prime physical condition anymore – he looks paunchy, slightly haggard and a little on the seedy side – but his appearance fits the moonlighting ladies’ man he’s playing. Occasionally in close-ups, he displays flashes of something more devious just behind the smiling facade. Of course, the in-joke was that Hudson, at the time, was still seen as a romantic leading man and was not yet known for his gay lifestyle except within certain Hollywood circles.

Rock Hudson plays a charming sociopath in one of his most unusual roles in Pretty Maids All in a Row (1971), directed by Roger Vadim.

But Rock Hudson wasn’t the only one going through a career crisis in 1970. It was a year of major transitions in the film industry and every major studio was desperately struggling to keep up with the rapidly changing audience demographics. After the surprise success of Easy Rider (1969), Five Easy Pieces (1970) and other indie hits, everyone was trying to cater to the “youth market” and MGM was no exception though their shaky financial situation was worse than most (the studio would completely cease production by 1976 and by 1979 MGM was primarily a hotel company).

On the set of Pretty Maids All in a Row with director Roger Vadim (far left) and Rock Hudson (center).

Vadim recalled, “When I started shooting Pretty Maids All in a Row for MGM, there was not a single other film being made in any of the six main Los Angeles studios. It was a strange paradox that the only director working at that time in the legendary stronghold of the cinema was a Frenchman. The vast MGM studio complex was like some western ghost town. Three thousand people were still employed in the offices and in the workshops, but the famous faces that had set the world dreaming were no more than shadows, the machinery continued to turn, but to no purpose, like a train running along the track when the driver is dead…Apart from one or two television series, my film was the only production at the time and had three thousand MGM people working on it…Only in Russia have I seen such a cancerous bureaucracy.”

Part of the problem was the outdated assembly line approach to filmmaking that worked so well during the height of the studio system days. Vadim described a perfect example of this during the filming of Pretty Maids All in a Row: “I had to shoot three takes of a boy on his Vespa. In the morning a motorized column consisting of four trucks, the generator set, makeup vans, actors, extras, the producer, the director, costumes and mobile kitchens, plus six or seven production cars, set out from the studio. The drivers’ union refused to allow me to drive my own car. I managed to slip away unseen, accompanied by my director of photography, who had become a friend and accomplice. The actor followed on his Vespa. In an hour, with a hand-held camera, we had all the takes I needed. By the time the column arrived the shot was all finished. The studio had been figuring on two whole days of shooting.”

The lovely Angie Dickinson prior to her hit TV series Police Woman is a hands-on high school teacher in Pretty Maids All in a Row (1971).

Needless to say, Pretty Maids All in a Row didn’t save MGM from its downward slide. The film reviews were decidedly mixed; West coast critics tended to be more positive while East coast critics were extremely negative on the whole. Roger Ebert wrote, “One thing you can say about Pretty Maids All in a Row. Rock Hudson sex comedies sure have changed since Pillow Talk…The movie itself is, finally, embarrassing. It’s embarrassing because Vadim’s personal hang-ups don’t fit the nature of his material, and so he tries to bend things.”

Publicity still of Rock Hudson and a cast of aspiring female ingenues in Pretty Maids All in a Row (1971), directed by Roger Vadim.

David Thomson in The New Biographical Dictionary of Film provides a more accurate analysis in hindsight calling Pretty Maids All in a Row “a film of disturbing insights in that its central character – an amused Rock Hudson (once all that Universal allowed to the lovelorn) – does not separate his f#cking of campus nymphets from his murder of them. Too unreal to know in bed, these chicks are plastic enough to be disposed of. The sexual idea in Pretty Maids All in a Row has become psychotic, acting out the dismissal of human reality that has always been implied in the method. And yet the film is tritely playful and the succession of postpubic children are gilded by the loving photography of that veteran, Charles Rosher, who once caught the rapture of Janet Gaynor in Sunrise.” 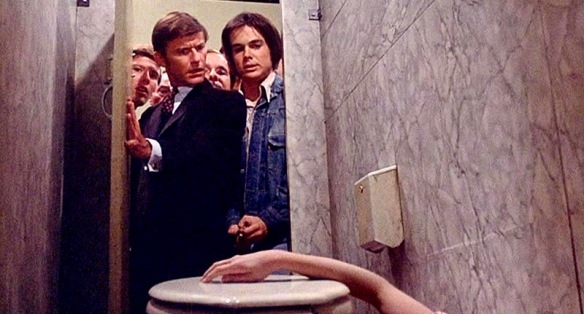 If nothing else, Pretty Maids All in a Row is of interest as an evocative snapshot of another time and place, a signpost signaling the end of old Hollywood and announcing the new one. For Vadim, however, it was something more: “I found it a thrilling experience…It was the most enjoyable piece of filmmaking I have ever done in my career.” 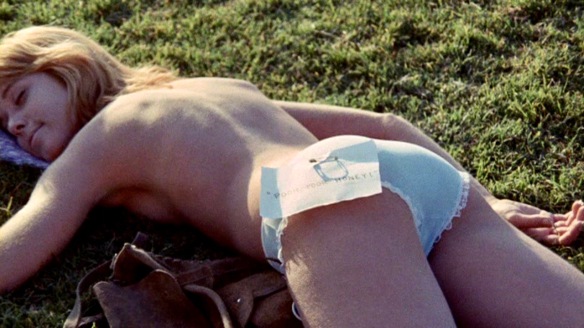 Sunbather or murdered teenage girl? A scene from Pretty Maids All in a Row (1971), directed by Roger Vadim.

One last bit of surprising trivia: Pretty Maids All in a Row was produced and written for the screen by Gene Roddenberry, the legendary writer and executive producer of the TV series Star Trek and subsequent movie franchise.

Pretty Maids All in a Row was originally released on VHS in 1998 but the Warner Archive Collection released a remastered, no frills version of it on DVD in November 2010 and it remains your best option to see this one-of-a-kind curio. 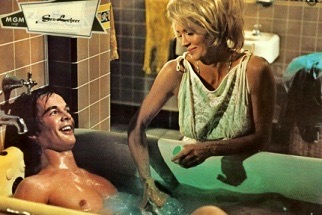