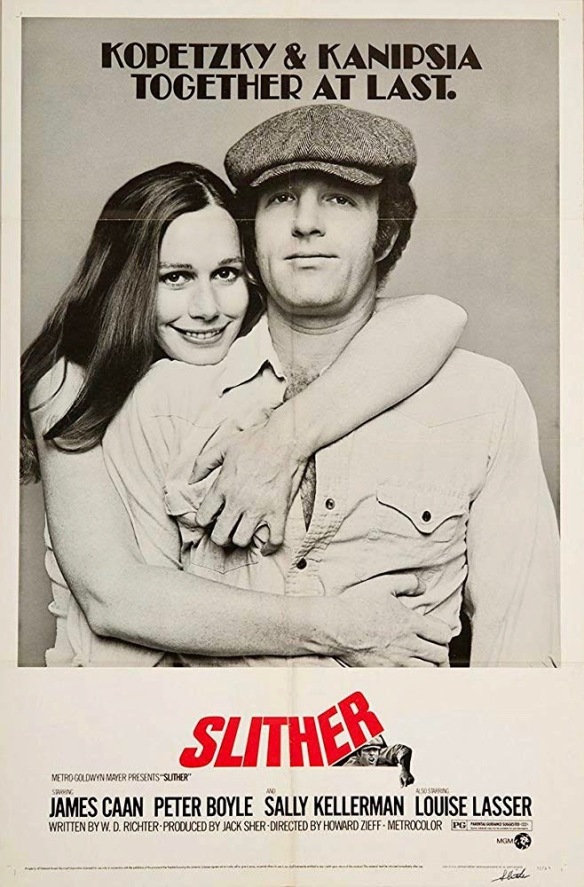 Slither (1973) is a film of firsts in many ways. It marked the directorial debut of Howard Zieff, who would go on to become one of the most sought-after comedy directors in Hollywood during the ’70s (Hearts of the West [1975], House Calls [1978], Private Benjamin [1980]). It featured the first screenplay by W. D. Richter who would later pen the 1978 remake of Invasion of the Body Snatchers, the 1979 remake of Dracula, and Brubaker [1980] as well as direct the cult film, The Adventures of Buckaroo Banzai Across the 8th Dimension [1984]. And it was James Caan’s first starring role after his critically acclaimed success in The Godfather [1972] and the beginning of his reign as a Hollywood leading man after struggling to break through in smaller scale movies like Rabbit, Run [1970] and T.R. Baskin [1971]. 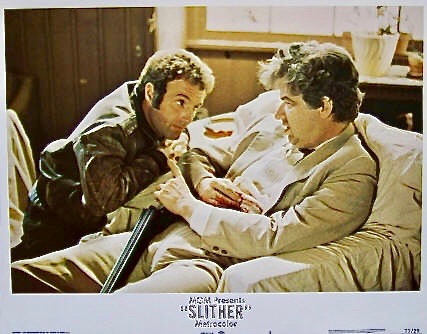 A dying Richard B. Shull (right) reveals clues to a missing fortune to James Caan in the oddball road trip comedy-drama Slither (1973), directed by Howard Zieff.

Slither opens as two recently paroled convicts, Dick Kanipsia (Caan) and his friend Harry Moss (Richard B. Shull), are taking a train to Harry’s home in the country. Once there they are ambushed by unknown assailants and Harry is mortally wounded but before he blows himself and his home sky high with dynamite, he reveals two names to Dick that supposedly know the hiding place of a huge sum of money Harry had stolen before being arrested. Dick tracks down one of the men, Barry Fenaka (Peter Boyle), who along with his wife Mary (Louise Lasser), take to the road with Dick in their RV to find the missing Vincent J. Palmer, the only man who really knows where the loot is hidden.

Louise Lasser, Peter Boyle and James Caan join up in a kooky treasure hunt in the offbeat comedy, Slither (1973).

Along the way they are joined by the hyper, emotionally unstable Kitty Kopetzky (Sally Kellerman) whom Dick had previously met and abandoned on the road during one of her firearms freak-outs. The foursome make uneasy traveling companions as they cruise the back roads of America while being followed by two mysterious black RVs.

From its opening frame to its last, Slither maintains a cheerful quirkiness and looney charm that more than compensates for its rambling narrative which remains as vague and ultimately inconsequential as one of Hitchcock’s “MacGuffins.” One of the more eclectic entries in the road trip movie genre, Slither is both a chase thriller and a comedy with the latter dominating the overall tone. At times the film threatens to move into darker, noir territory similar to Jonathan Demme’s later road trip movie, Something Wild (1986), but never actually descends into the disturbing violence and dramatic intensity of the latter film. Instead, the deaths, shootings and car chases are directed with a light hand with an emphasis on the colorful and goofball characters that populate this world of donut shops, trailer parks, roadside diners and bingo parlors. All of this is wonderfully captured in Laszlo Kovacs’s golden-hued cinematography which has a real feel for offbeat Americana.

Peter Boyle as Barry Fenaka is one of the highlights in Howard Zieff’s quirky road movie comedy, Slither (1973).

One of the film’s chief virtues is the loose, improvisational nature of the performances with James Caan slyly underplaying to Sally Kellerman’s manic hippie hitchhiker while Peter Boyle makes something original and funny out of his wanted embezzler, a rather mundane Middle America-guy who is obsessed with RVs and big band music.

These are the mysterious black vans that stalk the central characters in Howard Zieff’s road movie comedy, Slither (1973).

Louise Lasser, the ex-wife of Woody Allen, who had appeared in three of his films starting with Take the Money and Run [1969], also shines in her role as a former schoolmate of Dick’s, who worshipped him from afar in high school. The supporting cast is equally appealing and includes standout roles for Allen Garfield and Alex Rocco as unlikely and rather inept villains.

MGM didn’t know how to market Slither or what to do with it and the film received half-hearted distribution despite positive reviews from most of the nation’s prominent film critics. Roger Ebert wrote, “Slither is the kind of movie that’s constantly changing gears, it’s kind of a cinematic four-on-the-floor. It begins with violence, ends with tranquility, and along the way there’s a chase involving no less than three recreational camper vehicles…What makes it goofy, and nice, is that little effort is made to explain things. They just sort of happen as our friends race down the road. What holds everything together is the nice sense of timing displayed by the director, Howard Zieff, who is the guy behind many of the best TV commercials these days (Alka-Seltzer, Benson & Hedges)… Zieff would rather go for good moments than construct an over-all structure. So the movie is heavy on moments, light on structure, and that’s OK.”

Director Howard Zieff circa the 1970s

Pauline Kael of The New Yorker also concurred, calling the movie, “a suspense comedy with a prickly, flea-hopping humor – a sort of fractured hipsterism…The picture never delivers on its promise, but the gags are sneaky and offbeat, and the cast is full of crazies.” 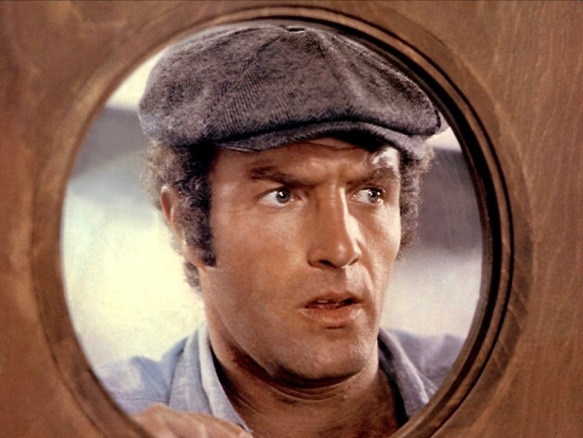 Richter would end up being nominated for a Writers Guild of America award for his screenplay for Slither and he would eventually earn another Writers Guild nomination for Invasion of the Body Snatchers (1978) and an Oscar nomination for his Brubaker (1980) screenplay. Zieff would eventually graduate to the big leagues with such box office hits as The Main Event (1979), Private Benjamin and My Girl (1991) but movie buffs seem to prefer his earlier comedies and Slither is a true original and an engaging example of the sort of cinematic freedom available to first time directors in the early seventies. You should also check out Zieff’s delightful romantic comedy House Calls (1978) with Walter Matthau, Glenda Jackson, Art Carney and Richard Benjamin.

Peter Boyle and James Caan struggle over a gun in the comedy-mystery Slither (1973), directed by Howard Zieff,

Slither was released in February 2010 as a Warner Archive Collection manufacture on demand DVD as a stand alone disc with no special features. It could certainly use a Blu-Ray upgrade but I doubt Warner will take the trouble for such a little known film despite its quirky charms. 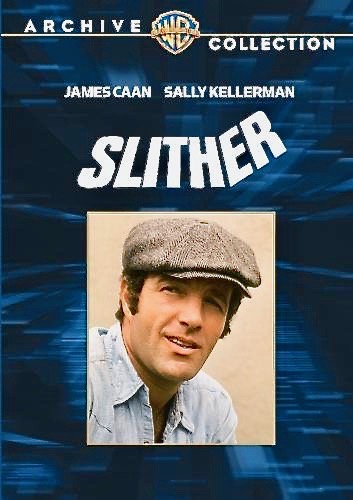