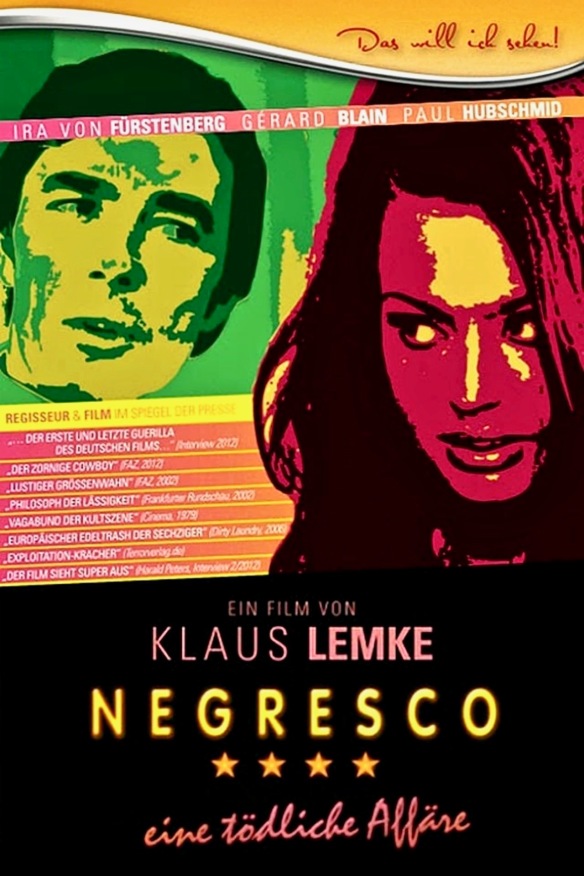 In an amoral world where everyone is a liar, cheat, assassin or ruthless opportunist, can there be any heroes? It all comes down to a matter of charisma and underdog appeal in West German director Klaus Lemke’s Negresco – Eine Todliche Affare (1968), which is also known by the far more suggestive title, My Bed is Not for Sleeping. The film is a flashy, colorful bauble of swinging sixties cinema that flirts with several genres without committing to any. Is it an espionage thriller? A sexy jet-set romance? A cynical expose of the La Dolce Vita crowd and their pretentious lives?

Gerard Blain and Ira von Furstenberg play lovers on the run who play their final act a Switzerland resort in Negresco – Eine Todliche Affare (1968), aka My Bed is Not for Sleeping.

The film is more style than substance and the flimsy plot is just an excuse to exploit the photogenic appeal of the French Riviera, the slopes of the Blais da Muottas region of Switzerland and the historic Negresco hotel in Nice (hence the title). 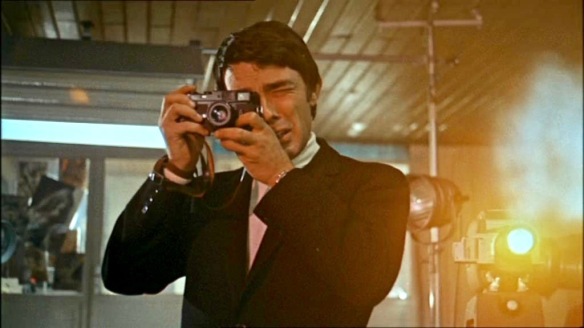 Roger (Gerard Blain) is a hipster fashion photographer who seems to be modeled on David Hemmings’s character in Blow-Up in Negresco – Eine Todliche Affare (1968).

The story begins with Roger (Gerard Blain), a handsome, cocksure schemer who supports himself as a freelance photographer. When we first see him, he is snapping shots of three semi-nude models in a wind tunnel as a film is projected onto their bodies. It’s like a parody of the David Hemmings character in Blow-Up as Roger growls at his subjects, “Shake it damnit!”

In voice-over narration, Roger explains himself and sets the tone for this rake’s progress: “Money has always been my problem. Money and women. I’ve had enough women and yet not enough. And money? I’ve just had small change in my hands. I wanted to get to the big money, to the large bills.”

When Roger happens to see a collection of private nude photos of Laura (Ira von Furstenberg), the trophy wife of a wealthy international tycoon named Parrish (Paul Hubschmid), he comes up with a blackmail scheme that begins with the seduction of Laura (she puts up remarkably little resistance). 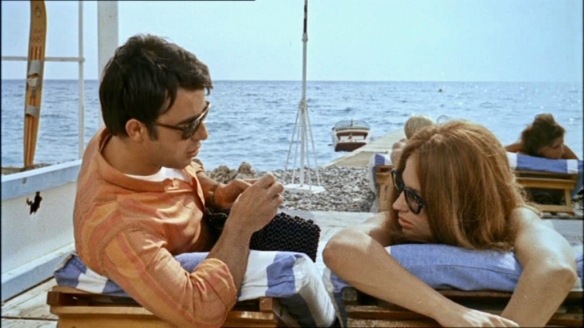 Soon the two lovers are on the run from Parrish – who may be a some kind of covert spy – but everywhere they go they are followed or betrayed by associates of Laura’s husband such as Borell (Serge Marquand), a predatory millionaire, and his two thugs for hire, Jeff (Ricky Cooper) and Nicolas (Volker Heim). 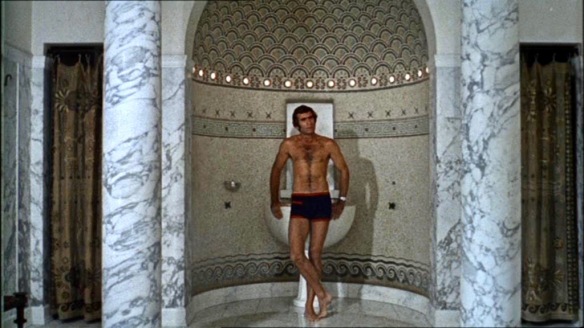 Lemke may have intended Negresco to be about rebels bucking the system but Roger and Laura are as greedy, egocentric and morally bankrupt as the corrupt capitalists they are trying to fleece. The couple is clearly out of their league but not cunning enough to realize that until the bitter end. But they look fabulous together so why not root for the beautiful losers? 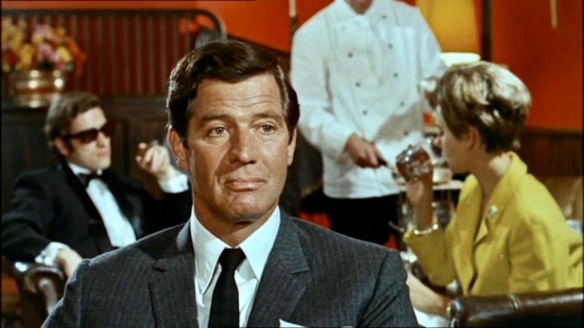 Parrish (Paul Hubschmid) is an odious international businessman who treats his wife like one of his possessions in Negresco – Eine Todliche Affare (1968).

In Germany Lemke is considered one of the pioneers of the German New Wave of the 60s and 70s but he is practically unknown in the U.S. unlike his more famous peers Werner Herzog, Rainer Werner Fassbinder, Wim Wenders and Volker Schlondorff. Both of Lemke’s first two features, 48 Stunden bis Acapulco (1967) and Negresco – Eine Todliche Affare, were commercial failures and featured loose cannon protagonists challenging the established order of things.

Switching from commercial filmmaking to television production, Lemke quickly made a name for himself with gritty, hard-edged dramas set in contemporary German society featuring non-professional actors he discovered on the streets. In fact, Brandstifter (1969), his first feature for West German TV, became a cause celebre for its politically polarizing subject matter of the Baader Meinhof Gang, a notorious terrorist group who first attract attention for a series of targeted arsons.

A scene from the 1972 German TV movie Rocker, directed by Klaus Lemke.

Lemke soon found his groove as the bad boy of independent German cinema, shooting guerilla-style without a script or famous actors and featuring anti-establishment characters like the motorcycle gang hellions of Rocker (1972). The director continues to make films today and has a considerable cult following in Germany but has yet to crack the film market in the U.S. Perhaps a retrospective of his films at New York City’s Film Forum or the Anthology Film Archives could generate some interest?

Certainly the main leads of Negresco are enough to warrant a revival of the film. Gerard Blain became famous for his association with the emerging Nouvelle Vague directors in films like Francois Truffaut’s 1957 Les Mistons (co-starring Blain’s wife at the time, Bernadette Lafont), Claude Chabrol’s Le Beau Serge (1958) and Les Cousins (1959) and Jean-Luc Godard’s Charlotte et Son Jules (1960). He probably could have become as popular as Alain Delon or Jean-Paul Belmondo if he really wanted to be a major leading man in French cinema but he was more interested in directing and starring in films that reflected his own interests such as Costa-Gavras’s Shock Troops (1967) about a French Resistance rescue mission and La Musica (1967), an arty drama about a failed marriage co-directed by Marguerite Duras and Paul Seban.

Blain finally made his director debut with Les Amis (1971), a downbeat, realistic drama with autobiographical elements from Blain’s troubled childhood. He would go on to direct 8 more features (including one for French television), which were much closer to the austere, rigorous style of Robert Bresson, whom he greatly admired, but which were not popular with the public. He would also continue to act – Wim Wender’s The American Friend is probably his most famous late career role – but he died in 2000 without ever receiving the recognition and acclaim he deserved for his distinguished oeuvre. 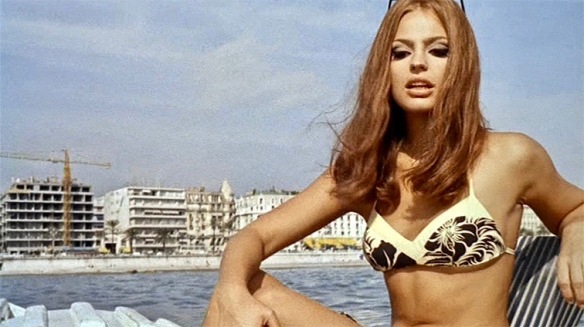 Ira von Furstenberg plays a jet-set trophy wife who uses her looks to get what she wants in Negresco – Eine Todliche Affare (aka My Bed is Not for Sleeping, 1968).

Equally intriguing is Princess Ira von Furstenberg as the female lead in Negresco. A glamorous Fiat heiress who was a genuine jet-set darling, von Furstenberg was more famous for her social life, cavorting with the likes of Cecil Beaton, Diana Vreeland and fashion designer/artist Karl Lagerfeld. As the flippant, unfaithful Laura, she radiates an understated elegance and slightly aloof beauty not unlike the model/actress Capucine or pouty French actress Jacqueline Sassard.

It must be said that Negresco is the sort of film that works just fine with the sound turned off. You could use it as a visual background/video wallpaper for your next soiree and provide your own 60s mix tape for musical accompaniment. In fact, there are two songs from the Negresco soundtrack (courtesy of composer Klaus Doldinger) that belong on any playlist from 1968. One is the bombastic theme song sung by Swiss pop star Hardy Hepp and sounds inspired by John Barry’s Goldfinger score. The other is a Euro lounge music delight called “Tribute to Otis Redding” attributed to Paul Nero Sounds (an alias for Klaus Doldinger) which underscores a groovy pot party which degenerates into a S&M fantasy.

The spontaneous pot party scene is about to begin at the villa of Borell (Serge Marquand, upper right) with music by Klaus Doldinger. (from Negresco – Eine Todliche Affare, 1968).

Speaking of Goldfinger, Lemke drops a few James Bond visual references in Negresco even though the film is not really a bona-fide espionage thriller. One scene features von Furstenberg browsing a bookstand at an airport where the featured paperbacks are by Ian Fleming and the other showcases Blain and von Furstenberg walking past an oversized film photo for You Only Live Twice. 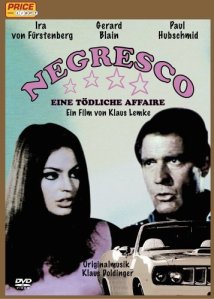 Negresco – Eine Todliche Affare is not currently available on any format in the U.S. You can find German language only versions of it on DVD in the PAL format in Europe (you must have an all-region player to view it). Since this is a relatively obscure title, I doubt we are ever going to see this one get a domestic release on Blu-Ray. However, you can get a decent DVD-R copy of it from European Trash Cinema.

Ira von Furstenberg, director Klaus Lemke (center) and Gerard Blain during the making of Negresco – Eine Todliche Affare (1968). Ira and Klaus were an item at the time.

Other web sites of interest: