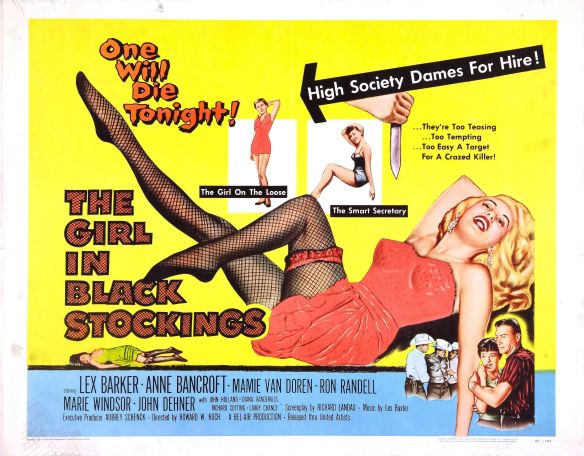 Long before it ever became available for the home video market, The Girl in Black Stockings would occasionally pop up on late night television screenings in unexpected places like Turner Classic Movies. Such a lurid, sensationalistic crime drama was a natural fit for the drive-ins of its era but it actually makes sense that TCM would air this rarely seen obscurity because The Girl in Black Stockings is a classic sleazefest and definitely several notches above the standard exploitation drive-in fare that tantalized audiences in the late fifties before the advent of more explicit films like Blood Feast (1963). 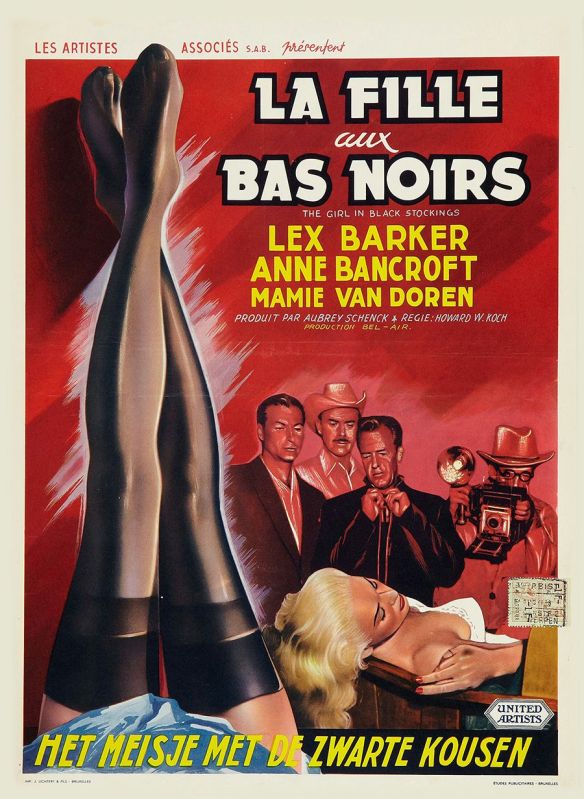 Synopsis: A maniac is on the loose at a Utah resort, murdering and then mutilating the bodies of several voluptuous young women. Who could it be? The list of suspects is endless since just about everybody at the resort appears to be ‘bent’ or psychologically damaged in some way and that includes our hero, David Hewson, a young lawyer/playboy on vacation; Edmund Parry, the hateful wheelchair-bound proprietor of the lodge; Julia Parry, Edmund’s over-protective sister; Indian Joe, the town drunk, and Frankie Pierce, a worker at the local log mill. 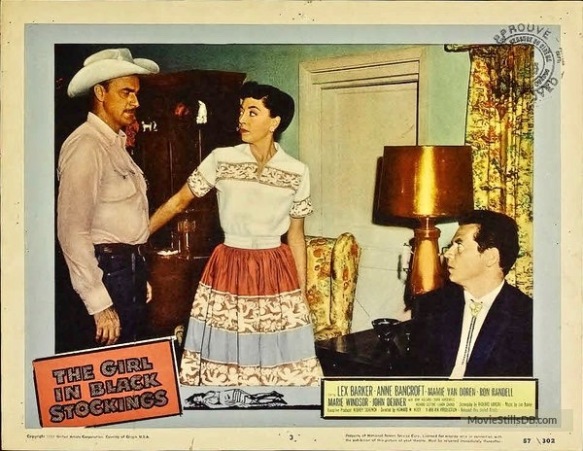 For some viewers, the identity of the mysterious killer might not be as puzzling or as interesting as the oddball cast which was assembled for this low-budget indie distributed by United Artists and directed by Howard W. Koch (Big House, U.S.A., Untamed Youth, Frankenstein 1970). 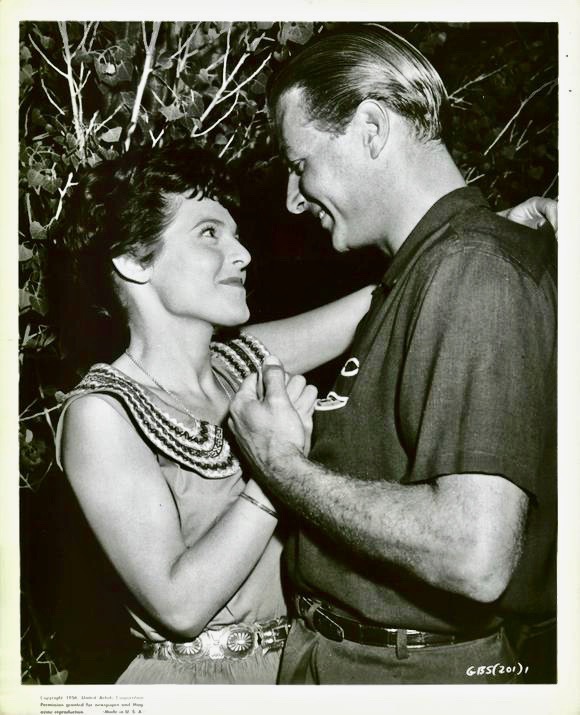 A publicity still of Anne Bancroft and Lex Barker from The Girl in Black Stockings (1957), directed by Howard W. Koch.

First of all, you have Anne Bancroft in the key role of Beth, a potential victim of the roaming psycho. Admirers of Bancroft’s later work (acclaimed films such as The Miracle Worker [1962] and The Graduate [1967]) will enjoy seeing her make the most of her deceptively innocent character in this film, one of many B-movies like Gorilla at Large (1954) that convinced Bancroft to leave Hollywood and focus solely on a theater career beginning in 1958. 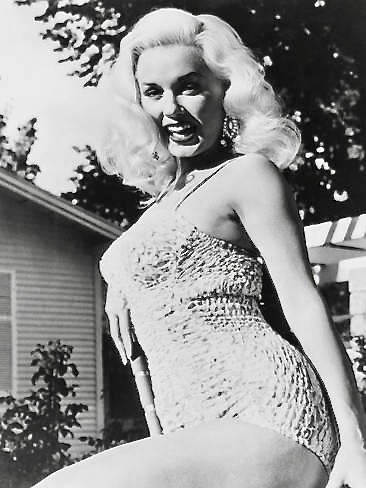 Mamie Van Doren makes the most of her brief screen time in The Girl in Black Stockings (1957).

Of course, it’s impossible to talk about The Girl in Black Stockings without mentioning Mamie Van Doren, who steals every scene she is in and it’s not because of her acting. Clad in tight-fitting outfits from The Pink Poodle boutique, Mamie flaunts her body for all it’s worth in her brief scenes, prompting unwanted comments to her date from the other male clientele like, “You outta keep stuff like that under lock and key.”

Lex Barker (far left) attends to invalid Ron Randell while Marie Windsor and others look off camera in The Girl in Black Stockings (1957).

Other cast members you’ll recognize include Marie Windsor, one of the great faces in film noir cinema (The Narrow Margin [1952], The Killing [1956]) and Lex Barker, a former screen Tarzan who married Lana Turner and was later outed as a rapist by her young daughter, Cheryl Crane (The ugly details are revealed in Crane’s best-selling memoir, Detour).

In the role of Sheriff Jess Holmes, the prolific John Dehner (over 250 film and TV credits!) should be a familiar face to those who take notice of character actors, particularly in western TV series like Rawhide, Bonanza, The Rifleman, Wanted: Dead or Alive and films such as Arthur Penn’s The Left Handed Gun (1958), where he played Sheriff Pat Garrett opposite Paul Newman’s Billy the Kid.

Ron Randell plays a crippled, self-loathing misogynist in The Girl with Black Stockings (1957).

Australian-born Ron Randell makes an indelible impression here as a pent-up, seething misogynist but he didn’t always play the heavy and, in some of his earliest screen roles, he was the hero (1946’s Pacific Adventure, 1947’s Bulldog Drummond at Bay, The Lone Wolf and His Lady from 1949). He is probably better known among cult B-movie fans for his roles in Omoo-Omoo the Shark God (1949), Captive Women (1952), The She-Creature (1956) and Most Dangerous Man Alive (1961). In smaller roles, look for Dan Blocker as a bartender (He played Hoss on the popular TV Western, Bonanza) and Stuart Whitman as a police officer.

Even better than the oddball cast is the demented screenplay by Richard Landau which features such strange dialogue exchanges between the characters that you’ll want to replay the scenes just to make sure you heard that correctly. It’s like Mickey Spillane on acid. Consider, for example, this terse line from the investigating detective: “Somebody died last night – a dame – somebody got nervous with a knife.” 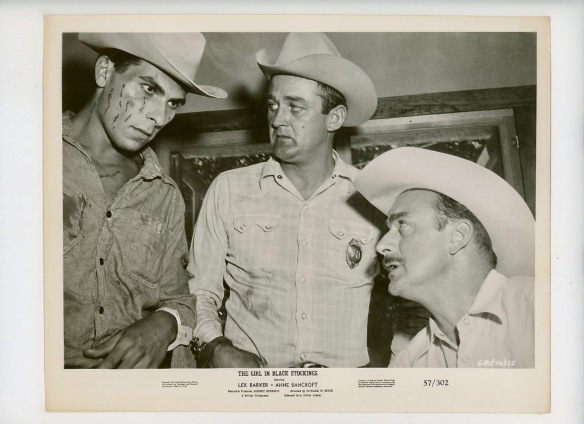 Then, there’s the odd clinical detail: “Those arms! Carved up like some crazy jigsaw puzzle!” And how about that nutty diner scene when Lex Barker gets philosophical with Anne Bancroft and says, “How did two people start out like we did, then get so lost? So many things seem to have gotten in the way. Worse part of it is, I don’t think it’s stopped. Well, enough about that – let’s talk about us!” The fact that hardly any relationship at all has been established between the couple when Barker makes this little speech only adds to the movie’s kookiness. 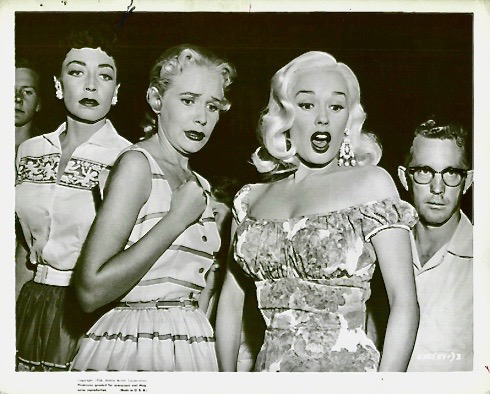 There’s also plenty of sick humor, like the scene where the little girl discovers a floating corpse in the swimming pool – “Look at that funny man” – only to have the coroner complete the joke with his kiss-off comment, “Got himself the start of a nice sun tan.” 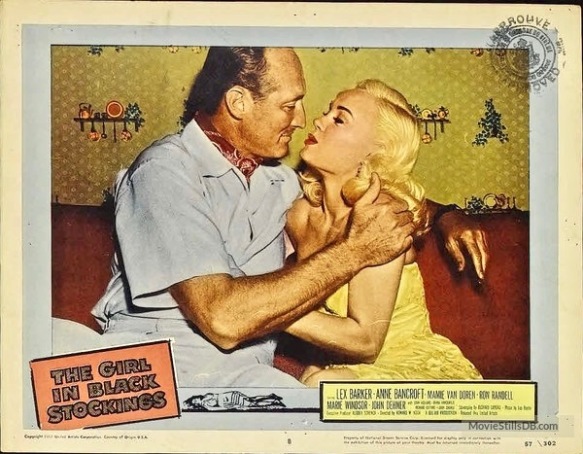 Being pawed and grouped by men is an every day occurrence for Mamie Van Doren in the exploitation thriller, The Girl in Black Stockings (1957).

Despite the presence of Mamie Van Doren and other Playboy pin-up wannabes, The Girl in Black Stockings also swings the other way, playing up the homoerotic overtones between some of the male characters in certain scenes. Lex Barker, who spends most of the movie lounging around in his bathing suit, not only functions as an unofficial ‘male nurse’ for invalid Edmund Parry (Ron Randell), lighting his cigarettes and hauling him in and out of his wheelchair, but also as an intimate confidante of the local sheriff (John Dehner) who tells Barker, “I guess I can let my hair down with you.”

There is something twisted and unhealthy about the relationship of Julia (Marie Windsor) and her brother Edmund (Ron Randell) in The Girl in Black Stockings (1957).

It’s also hard to ignore the incestuous overtones of any scene between Parry and his possessive sister (Windsor). A favorite exchange is the one where Windsor is tending to her brother in bed and says, “Can I get you some hot milk before I leave?” His reply, delivered with venomous self-loathing: “Milk? I’d like to get so drunk I’d look in a mirror and spit at my own face!” 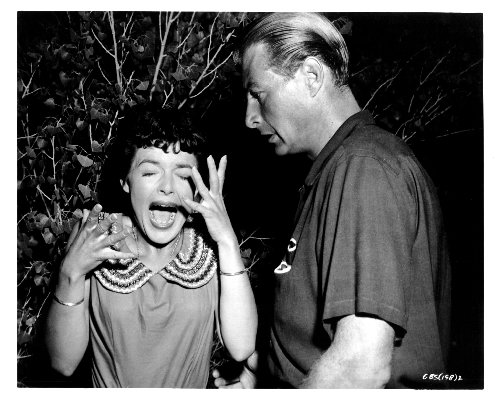 Anne Bancroft freaks out in front of Lex Barker in this overwrought scene from The Girl in Black Stockings (1957).

Yes, The Girl in Black Stockings is everything you’d expect from a lurid murder mystery, custom made for drive-in audiences, but it’s also much more. Beautifully filmed in crisp black and white at Lake Tahoe by William Margulies with a lounge music score by Les Baxter, The Girl in Black Stockings is exploitation film-making at its finest – which means it’s degenerate, campy, irredeemably sexist, and compulsive viewing for anyone who owns a copy of The Psychotronic Encyclopedia of Film.

MGM released The Girl in Black Stockings as a DVD-R in May 2011 as part of their MGM Special Limited Edition Collection. It is a no-frills release with no extras but it should please fans of the film until an upgrade comes along. 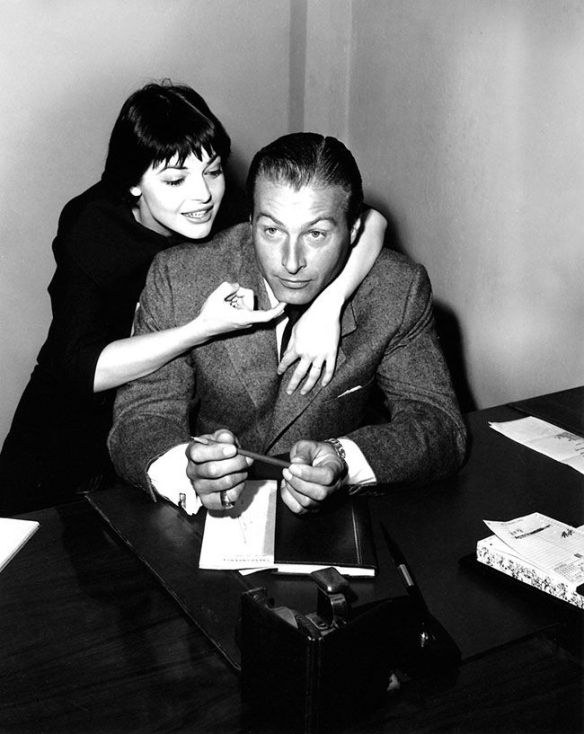 Anne Bancroft and Lex Barker in a playful mood on the set of The Girl in Black Stockings (1957).

*This is an expanded and updated version of an article that first appeared on the Turner Classic Movies website.