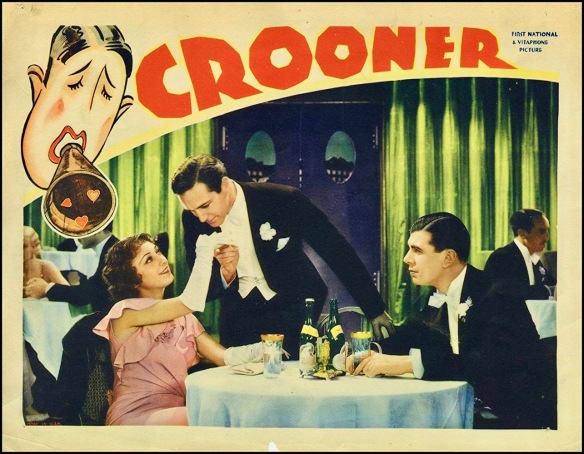 David Manners (center) turns on the charm for Ann Dvorak as Ken Murray looks on in Crooner (1932).

Thanks to Warner Archives and several other distributors there have been an astonishing number of Pre-Code films made available to classic movie fans on DVD, MOD and streaming services over the years. But not every title is available and there are still some major omissions such as A Free Soul (1931) starring Norma Shearer or The Story of Temple Drake (1933) with Miriam Hopkins. There are also lesser-known oddities awaiting discovery such as Crooner (1932), which pops up occasionally on Turner Classic Movies. Directed by Lloyd Bacon, starring David Manners, Ann Dvorak and J. Carrol Naish and clocking in at a brisk 68 minutes, the film charts the rise and fall of Teddy Taylor (Manners), a struggling musician and his jazz band, Ted Taylor’s Collegiates. 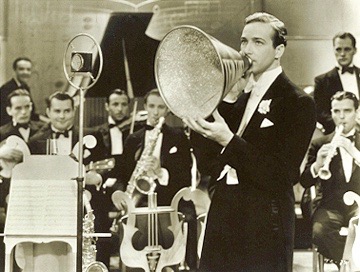 Teddy Taylor (David Manners with megaphone) performs with his band in Crooner (1932), a Pre-Code comedy-drama.

Crooner starts off as a rags-to-riches tale where some talented nobodies realize overnight fame after adopting a stage gimmick and then transitions into a cautionary tale about the dangers of believing your own hype. The second half, however, becomes so increasingly outlandish as Ted’s ego and narcissism rages out of control that it works best as outright parody. And the target of that parody – whether intentional or not – appears to be Rudy Vallee. 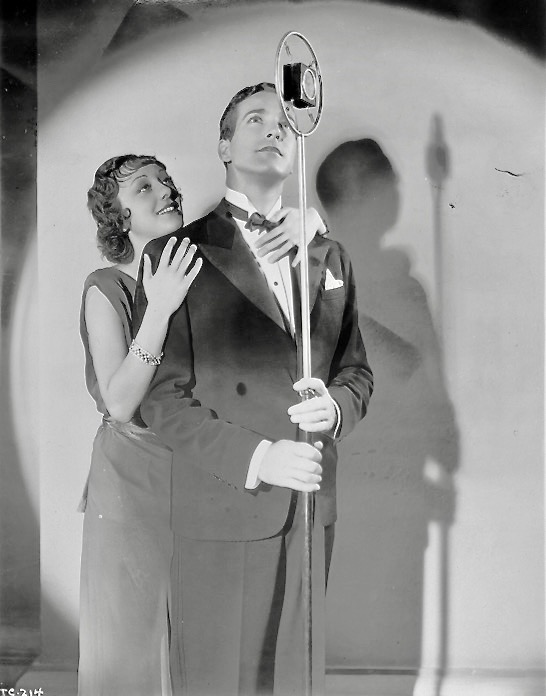 In the film, Ted is a saxophone player and acknowledged bandleader of a swing ensemble composed of his college buddies. When his lead vocalist develops a throat problem during their current band gig, Ted is faced with a dilemma – either find a new singer immediately or the band is out of work. As the only other member of the band with a half decent voice, Ted reluctantly steps into the vocalist’s spot but his singing is thin and lacks power; the clubgoers can barely hear him. Then, a drunk (Guy Kibbee) dances past the stage and jokingly hands him a megaphone. If it was intended as an insult, it has the reverse effect on Ted who suddenly gains confidence as he is able to stylize and project his voice. 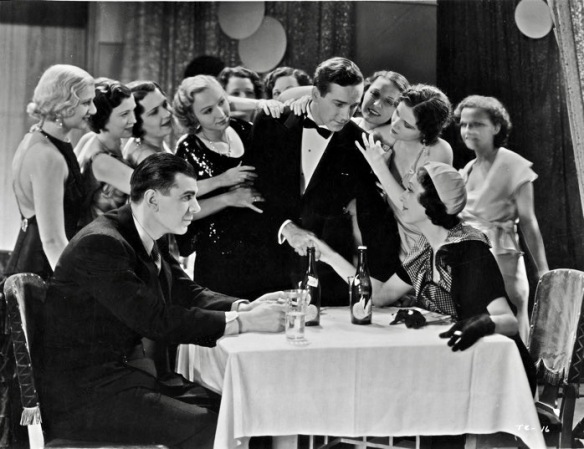 A film still from the Pre-Code comedy-drama Crooner (1932) starring David Manners (center), a singer with an adoring female fan base.

More surprising is the effect it has on women. Ted’s voice is like musical catnip. The ladies become transfixed or giddy while others crowd the bandstand – we even see Hattie McDaniel, in a bit part, emerge from the club’s kitchen and bat her eyes in ecstasy. In effect, Ted becomes the equivalent of a male siren, killing the ladies softly with his warbling. 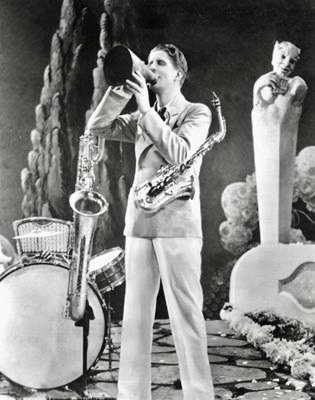 Like Ted, Rudy Vallee also started his own band while attending college (at Yale) and played the saxophone (and the clarinet too). In the beginning he didn’t really want to be a singer but discovered that most club owners at that time preferred bands with vocalists over traditional instrumental groups. Reputedly his bandmates tried to discourage him from singing – his voice was thin and not distinctive – but he persisted and became an accomplished singer of ballads and love songs. 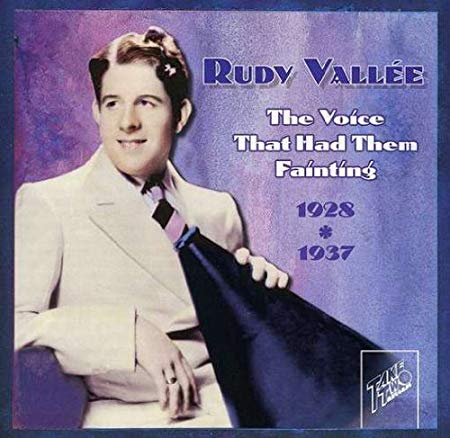 After Vallee signed a record contract in 1928 and began performing on the radio and making live appearances, his popularity grew rapidly, especially among women listeners who succumbed to his suave charm and smooth delivery. At some point in the late twenties, he began using a megaphone to accent his phrasing and it became one of his trademarks. 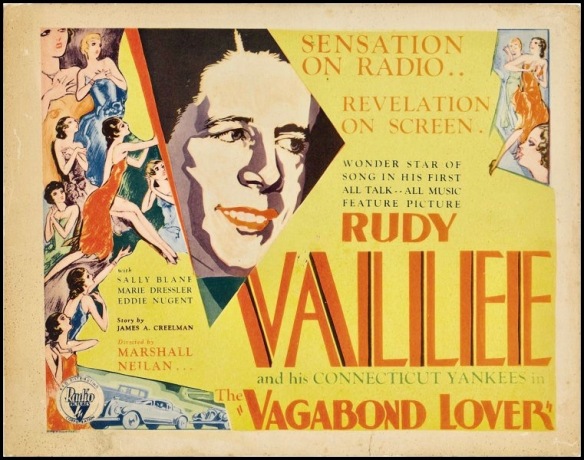 Soon Vallee was mobbed by women everywhere he performed and it was inevitable that Hollywood would come calling. In 1929 he appeared in his first feature The Vagabond Lover which helped mold the soon-to-be-stereotyped image of the crooner in movie musicals. Vallee’s singing style would soon inspire others to follow in his footsteps on screen such as Dick Powell and Bing Crosby and would endure as a trend in popular music until the forties. 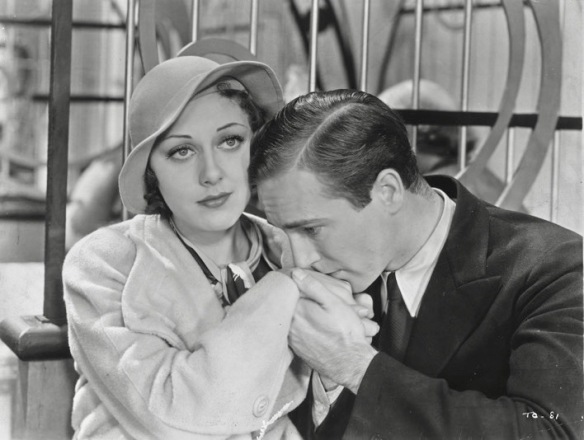 Ann Dvorak is having second thoughts about her boyfriend David Manners and his music career in Crooner (1932).

Audiences of today would probably find the appeal of this music inexplicable and in the case of Crooner, it’s not only silly but cloying – which is the movie’s inside joke. Despite the fact that several of the songs in the movie are written by such famous lyricists and composers as Al Dubin, Sammy Fain, and Harry Warren and include “Three’s a Crowd,” “Banking on the Weather,”and “Sweethearts Forever”, they all end up sounding like the same song as performed by Ted. You long for some hot jazz or gutbucket blues, anything to cut through these slow tempo serenades. 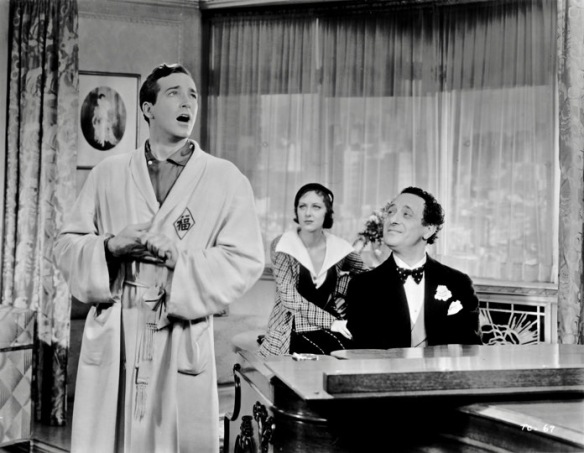 David Manners fancies himself as a great opera singer in the Pre-Code satire, Crooner (1932), directed by Lloyd Bacon.

Ted becomes so enamored of himself and his newly revealed “hidden talent” that he loses all perspective on reality. He becomes convinced he’s some kind of genius, starts treating his bandmates like replaceable hired help, ignores his fiancée (the irresistible Ann Dvorak) who helped launch his career, and fancies himself a continental playboy. Crooner’s depiction of Ted’s galloping vanity is amusingly developed through incidental shots of the singer admiring himself in mirrors at home or in the ballroom until he begins to puff up like a peacock, strutting around and speaking in an affected aristocratic accent. 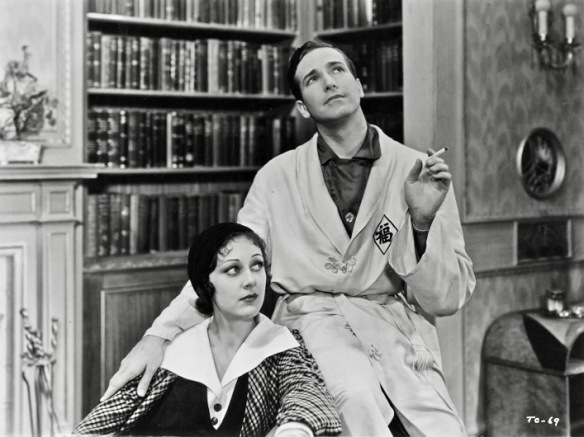 David Manners plays a vocalist who loses all sense of reality when he becomes popular in the Pre-Code film, Crooner (1932), co-starring Ann Dvorak.

He hires an Asian valet named Nito, starts dressing in elegant Japanese robes and peppering his speech with French phrases. And we know he’s lost his mind when he begins training as an opera singer which makes for the most painfully funny scenes in the movie. This is one arrogant pea brain whose comeuppance is richly deserved and when it comes, it’s quite satisfying, even though the movie lets him off easy in the contrived happy ending. 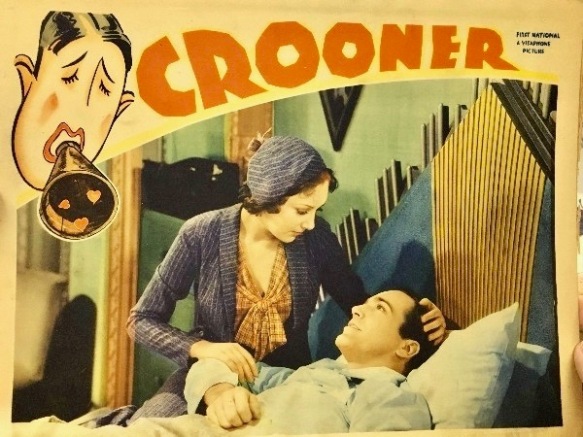 While Ted is an exaggerated example of someone transformed into a monster by fame (check out 1966’s The Oscar with Stephen Boyd for a more contemporary example), the parallels between this fictitious creation and Vallee are hard to ignore. At the height of his fame,Vallee was said to be hated by his musicians and staff and treated them like slaves. He often got into fistfights with photographers and hecklers in the audience and had no shame when it came to boasts: “People called me the guy with the cock in his voice. Maybe that’s why in 84 years of life I’ve been with over 145 women and girls.”

It’s “the girls” part of the quote that gives one pause…is he admitting he’s a pedophile? At any rate, Vallee’s penchant for fistfights obviously inspired the big climatic moment in Crooner when Ted gets heckled by a drunk and knocks him senseless, starting a huge brawl in the nightclub. When it’s revealed the heckler is a crippled war veteran, Ted’s stock hits rock bottom. Unlike Ted though, Vallee enjoyed a long and prosperous career as a singer AND an actor (he’s particularly delightful in Preston Sturges’ The Palm Beach Story). Even his archaic brand of crooning was revived briefly as a camp novelty by the New Vaudeville Band, who had a Billboard top forty hit with “Winchester Cathedral” in 1966. They also appeared in the Shirley MacLaine infidelity comedy, The Bliss of Mrs. Blossom (1968) and performed on the soundtrack. 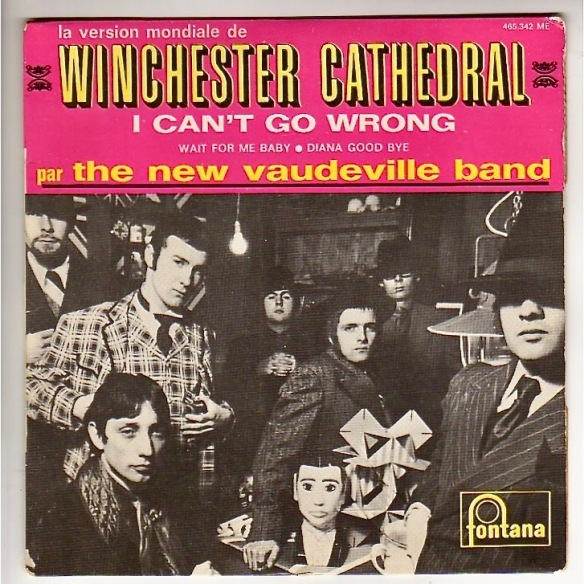 Crooner is no forgotten masterpiece but it’s a lot of fun and crackles with energy and wisecracks to spare. I’ve never cared for David Manners as an actor and always found him to be a handsome but colorless leading man with precious little charisma or screen presence. How he ended up in such iconic horror classics as Dracula (1931) and The Mummy (1932) or got cast opposite such dynamic actresses as Barbara Stanwyck (The Miracle Woman [1931]) or Katharine Hepburn (A Bill of Divorcement [1932], A Woman Rebels [1936]) is a mystery because he’s rarely memorable in anything. 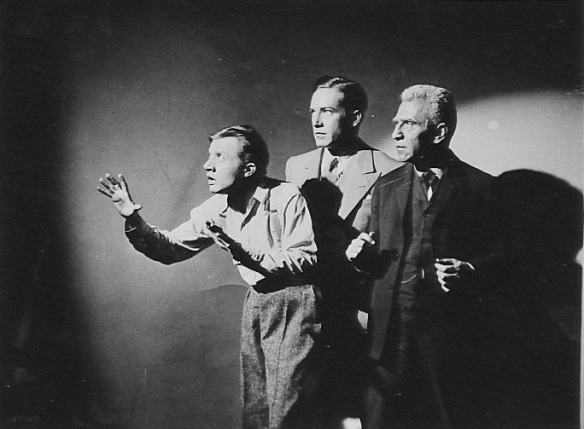 Yet I actually like him in Crooner. Not because it’s a great performance but because it’s great casting. He’s much more believable playing a conceited but mediocre singer who becomes convinced of his own greatness because it’s a side of Manners we’ve always suspected. But even in this, Manners is overshadowed by Dvorak, J. Carrol Naish as the chiseling, underhanded nightclub owner, Claire Dodd (in an amusing bit as an underwhelmed sexual conquest), and Ken Murray – yes, the famous entertainer, TV star and host of “Screen Snapshots” – as Ted’s street savvy manager and romantic rival for Dvorak. 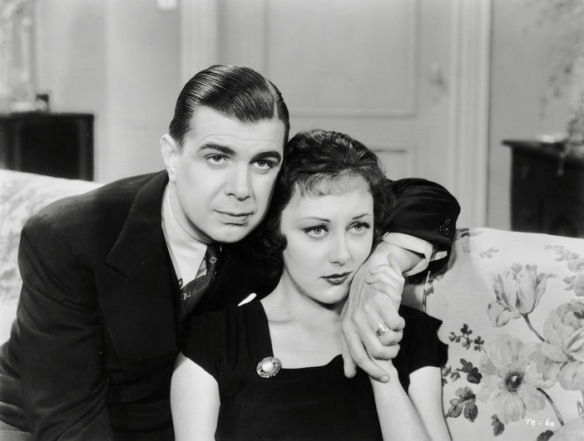 In the end, Crooner proves you can be a minor talent and still become a superstar – if you have a gimmick. And Ted’s gimmick – the megaphone – takes on a phallic significance that far eclipses his actual gifts. He drives the women wild but that’s a pretty sad commentary in itself. At the fadeout, it’s obvious the joke is on us. 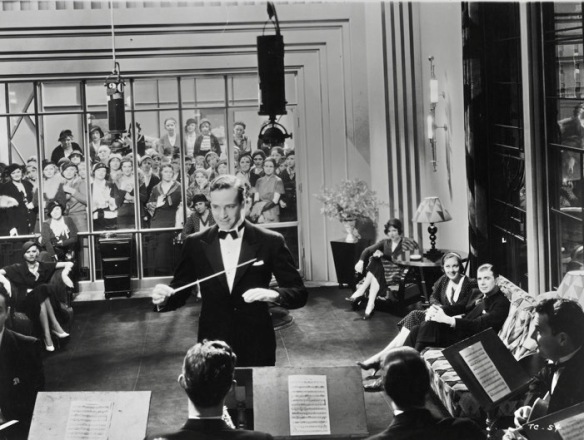 Crooner is currently unavailable on DVD or Blu-Ray but Warner Archive could possibly release it at some point as part of their Forbidden Hollywood series on DVD. In the meantime, look for it on Turner Classic Movies. 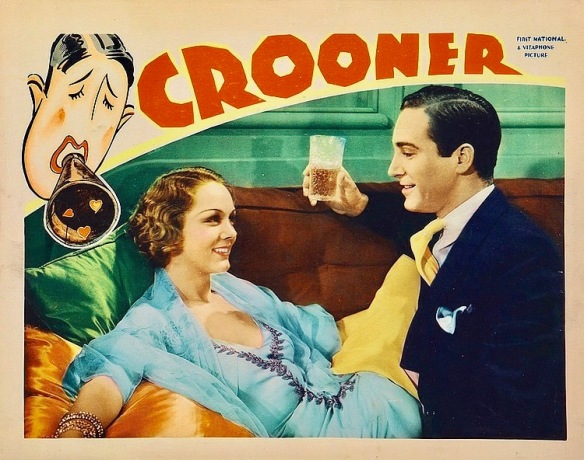