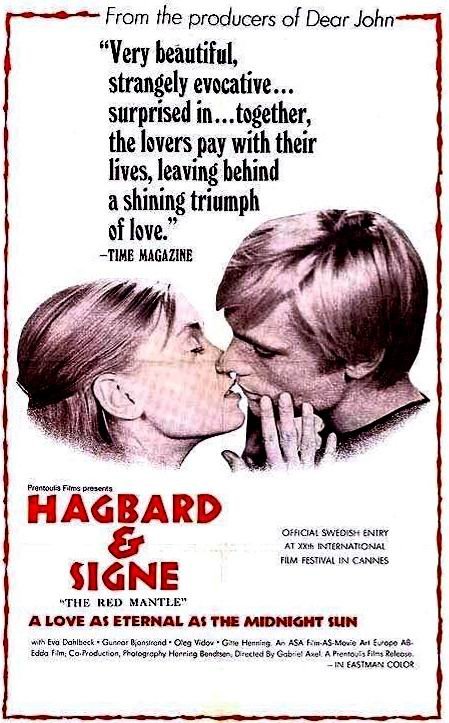 The name Gabriel Axel might not be familiar to most American moviegoers but many are familiar with his 1987 film Babette’s Feast which became a surprise art house hit and won the Oscar for Best Foreign Language Film, beating out Louis Malle’s Au Renoir les Enfants. Ironically, Axel was almost 70 and at the end of his filmmaking career when he experienced a career resurgence. But the film that is considered his first international art house breakthrough is Den Rode Kappe (1967), which was released in Europe as Hagbard and Signe and is best known under the title The Red Mantle in the U.S. The poster above with the awkwardly edited quote – and movie spoiler – from Time magazine also includes the reference “From the producers of Dear John” which means nothing to anyone today but that film was a slightly risque art film in its day (due to the nudity) and a nominee for Best Foreign Language Film of 1965 (It lost to Elmar Klosand and Jan Kadar’s The Shop on Main Street).

Based on a story from Gesta Dacorum (The History of the Danes), the first important history of Denmark by 13th century historian Saxo Grammaticus, The Red Mantle has elements of Romeo and Juliet combined with Viking mythology, heroic Danish poems and ancient blood feuds. What unfolds in an austere, briskly paced 92-minute narrative has a raw, primeval quality that transports you back to medieval Scandinavia. It begins as Hagbard (Oleg Vidov) and his two brothers ride off to avenge the death of their father, Haarund, killed in a duel with King Sigvor (Gunnar Bjornstrand). With the king in attendance, the three sons of Haarund engage in combat on horseback with Sigvor’s three sons. The king eventually calls the match a draw after witnessing Haggard spare the life of a son in combat. He also wants to stop the endless cycle of revenge and establish peace between the two feuding families.

For a brief period of time there is harmony between the two clans as Haggard and his brothers bond with Sigvor’s sons over a feast and roughhousing in a combination sauna/bathhouse (the male nudity would be verboten in an American film). But once Hagbard lays eyes on Signe (Gitte Haenning), a blonde angel who happens to be the king’s daughter, he is smitten…and doomed. Signe is promised to Hake (Henning Painer), a friend of the court, but Hildegisl (from a neighboring kingdom and played by Manfred Reddemann) plots to have Signe for himself and sets in motion a treacherous plot that bring tragedy to everyone.

The storyline has the familiarity of a classic archetype but director Axel makes it fresh and engaging with a visual approach that emphasizes the volcanic landscapes of Iceland (where it was filmed) and the physical actions and behavior of the main characters. Dialogue is used sparingly and the sound design is particularly evocative of another time with its mixture of clattering swords and armor, horses snorting and galloping, the crashing surf and discordant musical cues that utilize horns, a solo piano and male and female choruses (Per Norgaard is credited as the film’s composer with Marc Fredericks contributing musical accents on the piano).

A combat scene with graphic violence from Hagbard and Signe (aka The Red Mantle, 1967).

Visually The Red Mantle has an epic quality yet the drama remains intimate and moving. There are scenes of awe-inspiring beauty as well as sudden bursts of brutality and violence that will stay with you long after you’ve seen the film. The combat scenes, in particular, have a blunt power with beheadings, impalings and stabbings rendered quickly and as realistically as possible. A wolf hunt among the moss-covered, rocky terrain and massive caves of the countryside is enthralling and there are even brief moments of tenderness amid the harshness of the tale – an explicit but non-exploitative nude love scene between Hagbard and Signe.

Gitte Haenning and Oleg Vidov play doomed lovers in the medieval drama from Denmark, The Red Mantle (aka Hagbard and Signe, 1967).

In the lead roles, Oleg Vidov as Haggard and Gitte Haenning as Signe, are beautiful physical specimens and idyllic screen lovers – as romantic and as natural in their own way as Leonard Whiting and Olivia Hussey were in Franco Zeffirelli’s lush 1968 version of Romeo and Juliet. Russian actor Vidov was a major matinee idol in his native country but in the mid-eighties he immigrated to America where he found steady work in supporting roles in films (Red Heat, Jackie Chan’s First Strike) and TV series (The West Wing). He died in California at age 73.

Danish actress Haenning has also had a long and illustrious screen career but is probably more famous as a pop singer. The sixties were her heyday when she had top forty hits in Europe like “Tror du jag ljuger” and “Ich will ‘nen Cowboy also Mann.”

Gunnar Bjornstrand as King Sigvor (center, standing) and Eva Dahlbeck as his queen (left) are prominently featured in The Red Mantle (aka Hagbard and Signe, 1967).

More familiar to American audiences are Gunnar Bjornstrand as King Sigvor and Eva Dahlbeck as his queen. Both actors are well known for their many collaborations with Swedish director Ingmar Bergman and they are both regal and vainglorious in The Red Mantle, bringing a touch of Shakespearean pathos to the proceedings. The real scene-stealer though is German actor Manfred Reddemann as Hildegisl, the despicable villain of the piece. Looking a bit like a cross between photographer Robert Mapplethorpe and Udo Kier, Reddemann is effectively chilling in scenes where he bribes the elderly blind miser Bolvis (Hakan Kahnberg) with gold to spread false rumors or the sequence where he leads Hagbard into a planned death trap that ends with Hildegisl in cowardly retreat.

German actor Manfred Reddemann as he appears in the 1969 film, Battle of Britain.

If there are any problematic aspects of the film, it is the fact that most of the principal characters lack any awareness or intuition of the danger lurking in their midst and Hildegisl is such a transparent schemer that it’s hard to believe he doesn’t arouse suspicion among his hosts. But pride comes before a fall in many Shakespearean tragedies and it’s no different here as the Sigvor and Haarund clans remain blind to Hildegisl’s manipulations.

Hagbard (Oleg Vidov) with Signe (Gitte Haenning) in the background in the medieval saga, The Red Mantle (Hagbard and Signe, 1967).

The Red Mantle was well received upon its initial release in 1967. It was nominated for the Palme d’Or at Cannes and won a Technical Grand Prize-Special Mention. It also won a National Board of Review award in the foreign language film category. The New York Times praised the film, calling it an “extraordinary picture, joining beauty and horror in a rich, scalding eyeful and a haunting love story.” Roger Ebert also endorsed the film, calling it a “beautiful, lean, spare film, which reaches back into the legends of the past to find its strength…The plot has the simplicity of legend, as if it had been retold for many years until only the most important contours remained….The other thing that must be mentioned is the photography by Henning Bentsen. He places us so firmly in the breathtaking lonely vastness of Iceland that we can believe only heroes could inhabit this land.”  By the way, the U.S. title The Red Mantle is a reference to the colored cloak that plays a major part in the movie’s final act.

A scene from the dramatic climax from The Red Mantle (Hagbard and Signe, 1967), directed by Gabriel Axel.

Gabriel Axel was well known in Denmark as a predominantly commercial director beginning with comedies about families made for Danish television and easing into softcore entertainments like The Girls Are Willing (1958). The Red Mantle seemed like a major turning point but Axel was never able to capitalize on its success although he did achieve some notoriety with the 1968 documentary Danish Blue about Denmark’s censorship laws. He basically returned to television work and fluff like The Goldcabbage Family (1975) until his second artistic breakthrough in 1987 with Babette’s Feast, the first Danish film to win the Oscar for Best Foreign Language Film. 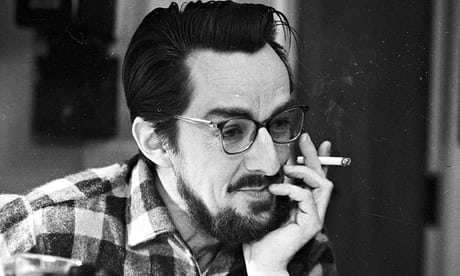 The Red Mantle is currently unavailable in any format through any authorized distributor. I found an acceptable DVD-R copy through European Trash Cinema but this is a film that cries out for a major restoration (as you can see from the featured imagery) and needs to be seen on the widescreen. Perhaps the UK-based Second Run DVD or The Criterion Collection might consider The Red Mantle as a possible future release.