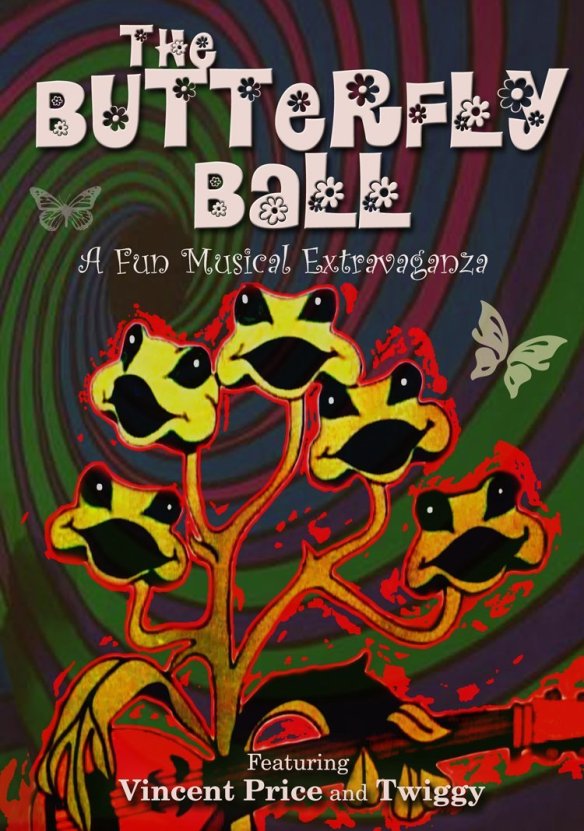 Now here is a curiosity that I plucked from a pile of discarded DVDs at a television station. I knew absolutely nothing about The Butterfly Ball (1977) except for the fact that I had seen it listed as a credit in Vincent Price’s filmography. So I popped it into the DVD player and immediately had a psychedelic flashback to the early seventies. The Butterfly Ball is, on the surface, a filmed rock opera that was staged at London’s Royal Albert Hall in 1975 and featured an all-star cast of British musicians, a few celebrities (supermodel Twiggy and Vincent Price) and some local talent (The Trinity School of Croyden Boys Choir), performing songs and verse from a score composed by Roger Glover, best known as the bassist and songwriter/composer of Deep Purple. 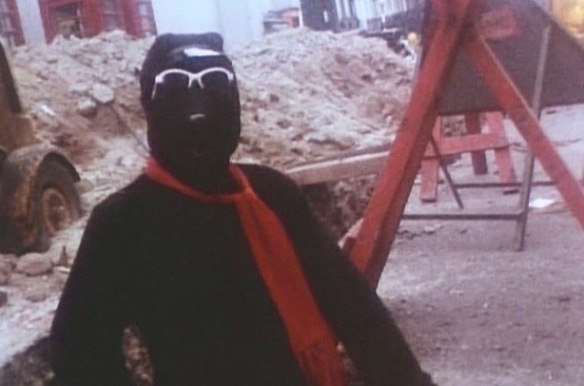 One of the many strange costumed characters who pop up in the rock opera film The Butterfly Ball (1977).

But this isn’t a straightforward concert film by any means and the performance footage is interrupted consistently throughout with flights into fantasy, Vietnam War footage, kids flying kites, people cavorting in animal costumes, a pair of dancers dressed in white gym outfits who look like they were recruited from a sex instruction video, and other ill-advised attempts to visualize the songs and lyrics. At one point, a bizarre but quite striking animation sequence is even introduced and for a few minutes it appears as if The Butterfly Ball has morphed into Yellow Submarine (1968). 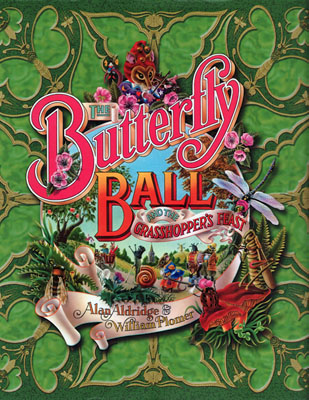 Glover’s musical fantasy was based on The Butterfly Ball and the Grasshopper’s Feast, a popular picture book for children which was illustrated by Alan Aldridge with verses by William Plomer and was first published in 1973. However, the original inspiration for Aldridge and Plomer’s book was the 1802 poem of the same title by William Roscoe. Glover was an admirer of the 1973 book and, according to him, was “offered the commission to write and record an album of music based on the book for a projected animated movie.” The animated feature never became a reality but it did lead to an animated short that was created by Lee Miskin and set to “Love is All,” one of the songs in Glover’s score. 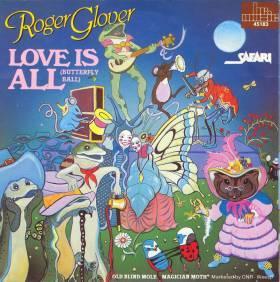 Glover had labored long and hard on composing an original score for this project and in the end a decision was made to present the work as a live concert at Royal Albert Hall, recruiting his own musical support for the event which was a benefit for the Leukemia Fund and Action Research for the Crippled Child. Glover had no say or involvement in the actual filming of the concert and concentrated instead on rehearsing and staging his score which was an artistic and critical triumph when it was finally performed. Several months later, producer/director Tony Klinger, premiered his film version of The Butterfly Ball at the Odeon cinema in Chelsea, London and Glover felt pressured to attend. 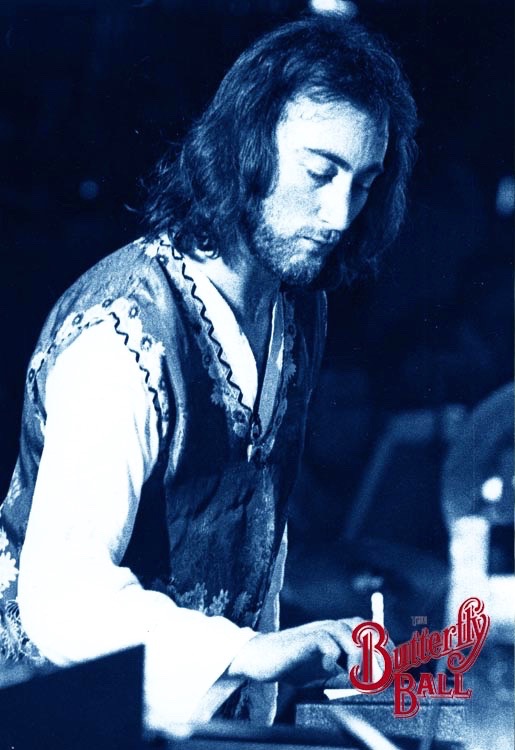 Musician Roger Glover as seen in the 1977 rock opera film, The Butterfly Ball.

You can read the entire account of his Butterfly Ball experience on his own web site (www.rogerglover.com/writings/messages-from-roger-glover/the-dvd-release-of-the-butterfly-ball-concert/) but here is what he experienced that night:  “I had no preconceptions about what it was going to be like but as it progressed I sat there cringing with embarrassment at the spectacle before me. The music was OK but the camera work, the lighting, the editing, and above all the inserts – either pseudo ballet dancers seemingly practicing their moves or people dressed as animals crawling or waddling around some desultory looking countryside – left me with a strong urge to run away and hide…Afterwards, damned by faint praise, I endured the lukewarm congratulations of my presumably equally embarrassed friends with far too many comments like, “That was …er, interesting,” as people sloped off to salvage what was left of their Chelsea evening, leaving me to… well, cry angry tears on the long, silent journey back home.” 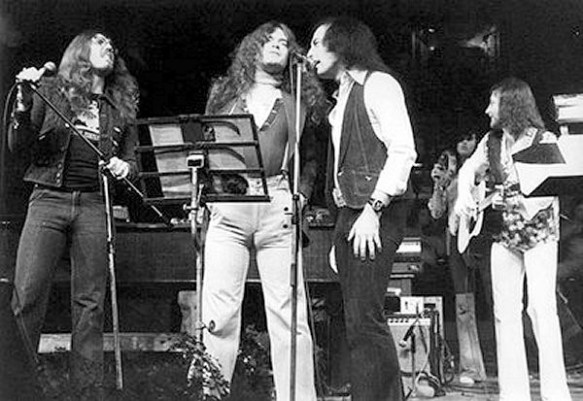 One of the many collaborative musical happenings in the 1977 rock opera film, The Butterfly Ball.

After watching The Butterfly Ball, one can understand Glover’s embarrassment and frustrations because his score is amazingly diverse and rich, offering a wide range of musical styles – everything from boogie-woogie to reggae to power pop to full symphonic movements. It’s an ambitious and impressive achievement and deserves to be as well known as other rock operas (The Kinks’ Preservation Act I [1973], Pink Floyd’s The Wall [1979]) that followed in the wake of The Who’s Tommy. Yet in the context of this film, there are too many crazy and baffling visual distractions to focus completely on the music. 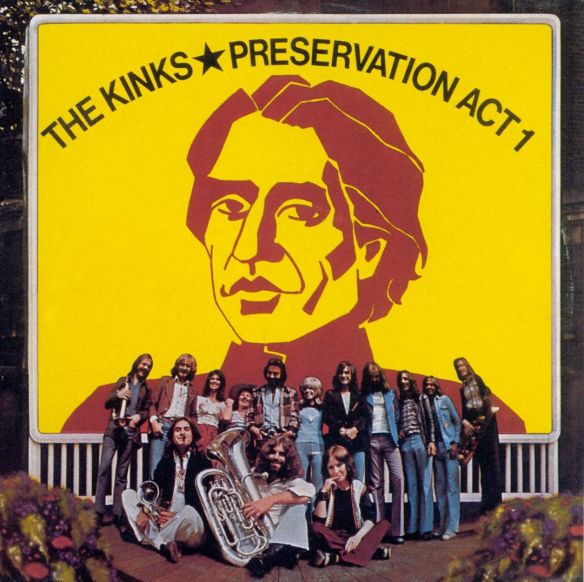 I know little about Glover’s background except for his involvement with the group Deep Purple who, during their prime, were considered pioneers in the hard rock genre along with Led Zeppelin. I never followed their music and was only aware of them through such radio hits as “Hush” (a cover of a Joe South song) in 1968 and “Smoke on the Water” (1972).  Glover had recently left Deep Purple to pursue solo projects when he became involved in The Butterfly Ball and the result is a strangely addictive score that won him new fans and is still in print. 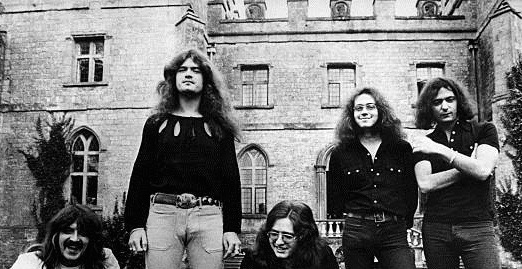 The rock and roll group Deep Purple back in the day. Can you spot Roger Glover in the lineup?

Klinger’s approach to the film’s editing, however, is a head-scratching crazy quilt and suggests that the movie was assembled in an all-night editing session/drug party. Some of it is quite hilariously inappropriate such as the “Behind the Smile” number in which exotic dancers in weird face masks twirl around a Hindu god. And the animal costumes in particular are a sorry sight; you can’t tell half the time what sort of critter is frolicking across the screen. Other parts of it are pretentious – does this rock concert really require war atrocity footage inserted? – and some of it is fascinating in ways that have nothing to do with the original source or the music – London street scenes (look, there’s the Playboy Club circa 1975) or film homages (a graveyard scene that seems inspired by Roger Corman’s Tomb of Ligeia (1964). 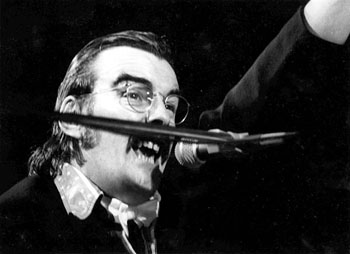 It’s also fun to see many of the musicians in their long-haired, tie-dyed t-shirt heyday, sporting some superbad fashions.  Among them are the late Tony Ashton, having fun with a blues number on the keyboards, Eddie Jobson and John Gustafson of Roxy Music, vocalist Helen Chapelle (she appears as a background singer in the film version of The Rocky Horror Picture Show), R&B singer Jimmy Helms, members of the funk-rock band Fancy, Ronnie James Dio of Rainbow and Deep Purple associates David Coverdale and Glenn Hughes. 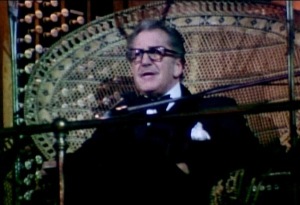 Vincent Price is prominently billed in the rock opera The Butterfly Ball (1977) but is just a small part of this Royal Albert Hall happening.

How does Vincent Price figure into all of this? He merely sits on stage in an oversized rattan chair, occasionally reading verses from The Butterfly Ball and the Grasshopper’s Feast, and looks amused by the whole thing. Price participated in this around the time he made the 1975 remake of Journey into Fear but before his late period excursion into television and appearances on “The Bionic Woman,” “The Brady Bunch Hour” and “The Love Boat.” 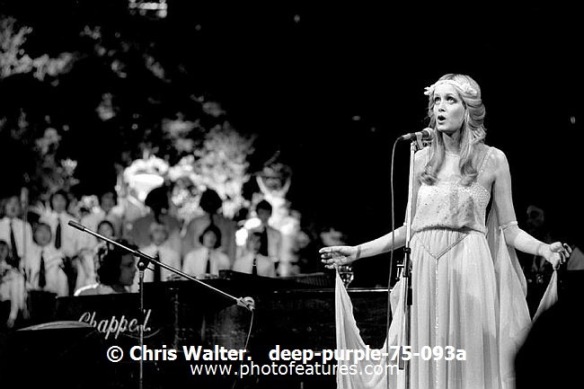 Twiggy is one of many guest stars featured in the rock opera The Butterfly Ball (1977).

The other big name in The Butterfly Ball is Twiggy who managed to parlay her success as a model into an acting career that began with the Ken Russell Art Deco musical The Boyfriend (1971) and includes such films as the mystery thriller W (1974), Freddie Francis’ The Doctor and the Devils (1985) and John Schlesinger’s Madame Sousatzka (1988). Looking like she stepped out of a Pre-Raphaelite painting, Twiggy gets to do a bit of singing here and she’s not half bad.

Christopher Gable and Twiggy star in the 1971 film musical, The Boy Friend, directed by Ken Russell.

In some ways it would be great to have an alternative version of The Butterfly Ball that is just a straightforward concert film despite evidence that the performance footage wasn’t shot with much imagination or style. Yet there is something almost endearing about Klinger’s peculiar creation so, in some ways, The Butterfly Ball is essential viewing for anyone interested in seventies pop culture. If you’re not…run, flee, get thee away. 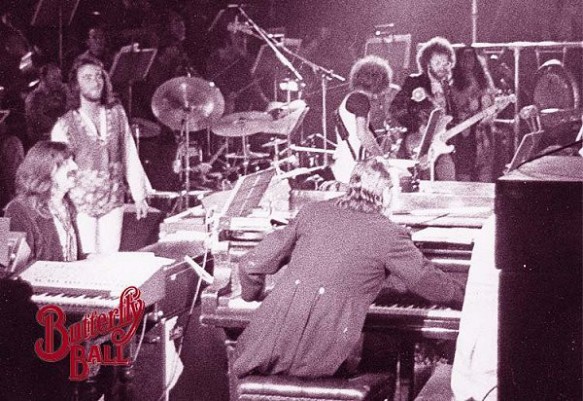 Another scene from the rock opera film The Butterfly Ball (1977), directed by Tony Klinger.

To my knowledge, the film never received a theatrical release in the U.S. and it’s easy to see why – there is no frame of reference for this thing. “The Butterfly Ball and the Grasshopper’s Feast” was not a huge cultural phenomena here like it was in England and Glover’s score would only have been familiar to his most devoted fans. Glover wrote that the movie “mercifully seemed to fade away” but to his horror, it was released on DVD by Music Video Distributors and Film Chest in 2006. 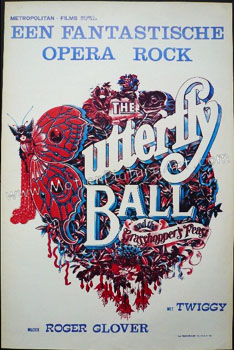 He actually mustered up the courage to watch it again and here are his parting comments on it: “From time to time I have ventured my negative feelings about it to anyone who would listen and I’m sorry (or possibly relieved) to say that those feelings of disappointment and wasted opportunity have not changed. It’s possible, if not likely, that this DVD is merely a catalog item of little or no importance in the scheme of things and therefore no effort was put into it – and I shouldn’t be complaining. Should you feel the need to investigate further then do so, but don’t expect me to be happy about it. And have some alcohol handy.”

That’s excellent advice. I took him at his word and had a good time. I suggest you do the same if you are able to get your hands on a DVD copy (You can sometimes find a used copy on Amazon).