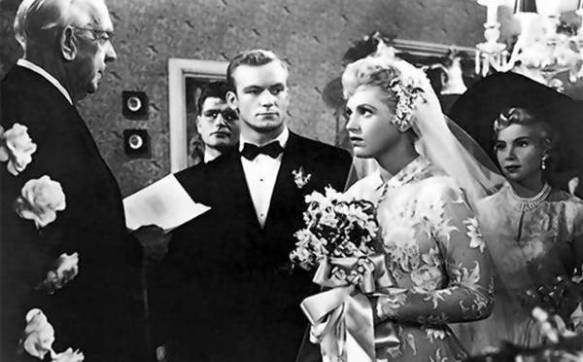 Aldo Ray as the groom & Judy Holliday as the bride in The Marrying Kind (1952), directed by George Cukor

Often overlooked among the films George Cukor directed in the fifties, The Marrying Kind (1952) starring Judy Holliday and Aldo Ray might have suffered from the fact that it was not a pure comedy like Pat and Mike (1952) and It Should Happen to You (1954). It is quite unique from anything else that Cukor attempted and it deserves more than the no-frills DVD release that was issued from Sony Pictures Home Entertainment back in 2003. This is one that cries out for a Criterion Collection Blu-Ray upgrade with all of the extra features that celebrate the featured film in context to its time, place and creation. The Marrying Kind is also an intriguing reminder of the career Aldo Ray might have had if other directors had not cast the actor in roles that accented his imposing physical presence over his acting ability. 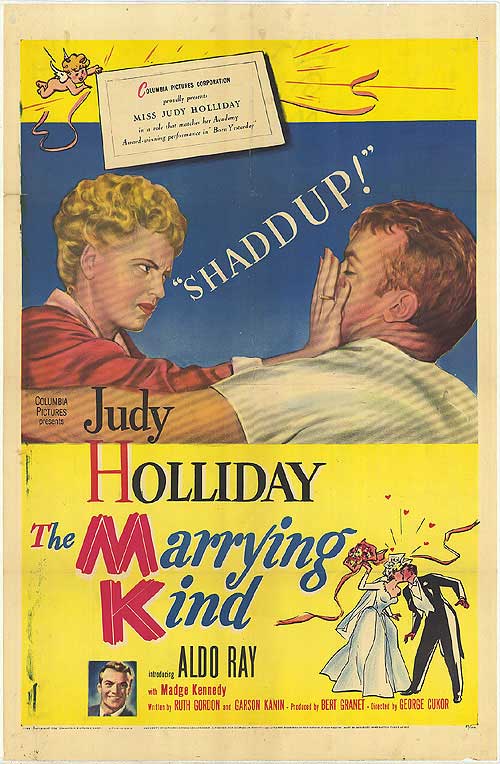 After the phenomenal success of Born Yesterday (1950) as both a play and a movie, the director (George Cukor), writer (Garson Kanin) and star (Judy Holliday) regrouped for a second film entitled The Marrying Kind (1952), only this time they were joined by actress/screenwriter Ruth Gordon who co-wrote the script with her husband Kanin. Because Judy Holliday had already established herself as a hilarious and gifted comic, audiences and critics were expecting another laugh-filled comedy but the resulting film defied easy classification. Mixing humor, drama and tragedy in unexpected ways, the film opens with a divorce court hearing. The judge is reviewing the case of Chet and Florence Keefer and we see in flashback the high and low points of their relationship beginning with their first meeting in Central Park and including their courtship, child-rearing, career disappointments, domestic squabbles and an unexpected death in the family.

An Italian lobby card in color of the black and white George Cukor film, The Marrying Kind (1952)

From the beginning Kanin and Gordon never intended for The Marrying Kind to be treated as a straight comedy but as a marriage-on-the-rocks tragicomedy. “Its aim is realism,” Kanin told Cukor, “Its tone is documentary rather than arty, its medium is photography rather than caricature. I think it is the closest we have ever come to “holding the mirror up to nature.” 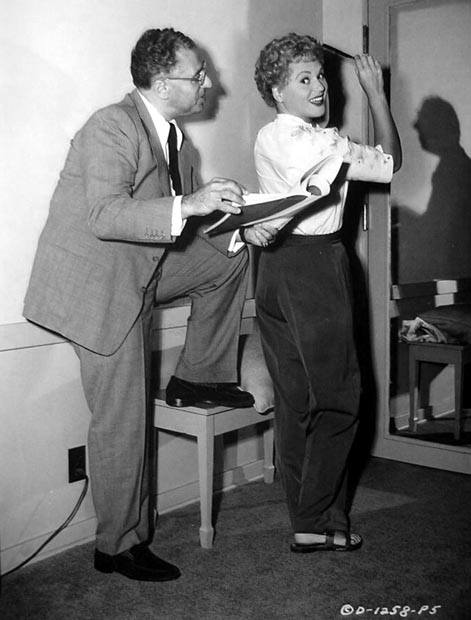 Kanin was very emphatic that the movie not have the “shiny,” slick look of a big budget commercial film. He also wanted the actors to be “extremely real. The trouble with most actors is that they look and sound and behave like actors, even the good ones.” In this regard, he advised Holliday to play her part differently from the role she created in Born Yesterday and to give a “performance of a real person who does real things.”

Aldo Ray and Judy Holliday in The Marrying Kind (1952)

For the role of Chet Keefer, Cukor wanted an actor who was not a well-known or typical leading man. He found who he was looking for in Aldo Ray who had only appeared in bit parts and supporting roles as Aldo DaRe up to then. According to Patrick McGilligan in George Cukor: A Double Life, the director “believed in Ray’s future, however, and worked long hours, in screen tests and throughout the filming, to put the gravelly voiced former town constable at ease, and to convey his offbeat personality”. In addition, Cukor had Ray take ballet lessons in order to alter his way of walking which reminded him of a football player. When The Marrying Kind was released, Cukor even went so far as to promote his new discovery with a special on-screen credit at the end: “You have just seen our New Personality Aldo Ray. Please watch for his next picture.”

Ray unfortunately never really got the opportunity to deliver on his promise as an actor despite his impressive performances in The Marrying Kind and Cukor’s next feature, Pat and Mike (1952). Most casting directors only saw him as a gruff, hulking “salt of the earth” type who seemed best suited to play army men, police officers or crude rednecks. As a result, most movie fans probably associate Ray with his macho sergeant in The Naked and the Dead, the 1958 film adaptation of Norman Mailer’s WWII novel, or the lustful dirt-poor southerner in the once steamy God’s Little Acre (1958), probably the best known of his later work.

The rest of the cast of The Marrying Kind was selected with the same care and concern as Ray though Cukor and Kanin sometimes disagreed over specific actors. Cukor wanted Ina Claire to play the part of Judge Kroll but Kanin disliked her “artificial acting” and said it would throw the picture into “a strange and make-believe key.” They ended up casting Madge Kennedy in the role, who like Ina Claire, was a longtime friend of Cukor; The Marrying Kind marked her first screen appearance in twenty-eight years. Other actors featured in smaller parts were Sheila Bond, a Tony-award winning Broadway actress making her film debut here; Peggy Cass, also making her screen debut (she would later achieve fame as a guest panelist on TV shows such as What’s My Line? and Match Game); and an uncredited Charles Bronson who plays Chet’s pal at his post office job (Bronson was still going by the name Charles Buchinsky at this stage of his career). 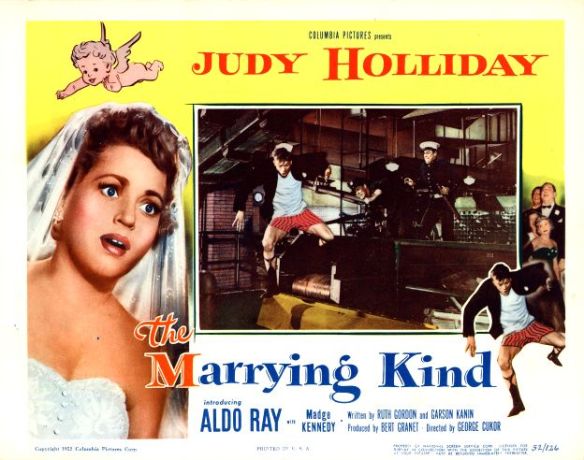 To ground the movie in reality, The Marrying Kind was shot on location in New York City in real settings such as Central Park, Times Square and the Stuyvesant Town apartment complex in East Manhattan [SPOILERS AHEAD]. For the memorable Decoration Day picnic in which the Keefer’s son Joey drowns in the lake, Cukor drew inspiration from a production of Anton Chekhov’s The Cherry Orchard.

At the time of The Marrying Kind, Kanin and Gordon were one of the busiest screenwriting teams in Hollywood. Not only were they working out the final script for this new film but also putting the finishing touches on Pat and Mike and Years Ago, the film adaptation of Gordon’s autobiographical play which was retitled The Actress, for MGM. Unfortunately, The Marrying Kind did not come close to the success of Born Yesterday despite the fact that Kanin and Gordon’s script was nominated for Best Written American Comedy by the Writers Guild and Holliday was nominated for Best Foreign Actress by the BAFTA (British Academy of Film & Television Arts).

The uneven tone of the film jarred most audiences and reviewers who had set expectations about it. Admittedly, Cukor’s excessive use of voice-over narration during several of the flashback scenes tends to hinder character development instead of enriching it. And Florrie and Chet are not immediately likable or sympathetic. In fact, they both could test anyone’s patience with their annoying idiosyncrasies. Cukor’s documentary-like approach also tends to flatten his attempts at humor which often seem contrived or artificial in this context. On the other hand, the arguments between the couple that increase in intensity and bitterness as the film develops may hit too close to home for many a married couple – petty arguments about in-laws, bad financial decisions, jealousy. Added to this is the fact that the film never really recovers its equilibrium after Florrie and Chet lose their child in a drowning accident even though the movie ends on a hopeful note with the couple reconciled. This may account for the film’s poor box office prospects, for The Marrying Kind is much closer to tragedy than comedy and not anyone’s idea of escapist fare.

Bosley Crowther of the New York Times, however, was one of the few reviewers at the time that recognized and admired what Cukor and Kanin were attempting to do in The Marrying Kind: “Think it not curious if we don’t seem to be as side-splittingly impressed with the hilarities in this picture as its promotion might lead you to expect. Hilarity is in it – hilarity of the best – as would be almost mandatory in any picture with Miss Holliday. But the charming and lastingly affecting thing about The Marrying Kind is its bittersweet comprehension of the thorniness of the way that stretches out for two young people after they have taken the marriage vows…This reviewer has fond recollections of King Vidor’s old film, The Crowd [1928], which was also about the frustrations of a young married couple in New York. The Marrying Kind compares to it, and that’s the nicest compliment we can pay.”

2 thoughts on “Marriage as Tragicomedy”