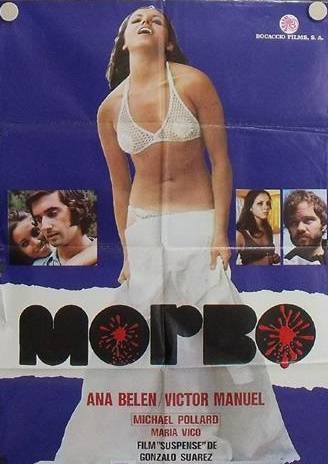 A newlywed couple’s road trip into the countryside grows stranger and stranger and then a deranged Michael J. Pollard shows up, wandering out of the wilderness and clutching a stolen wedding dress. Welcome to Morbo, a 1972 film by Gonzalo Suárez which is in the tradition of other dark, disturbing works by Spanish masters like Luis Bunuel (The Exterminating Angel), Juan Antonio Bardem (Death of a Cyclist) and Carlos Saura (The Hunt). 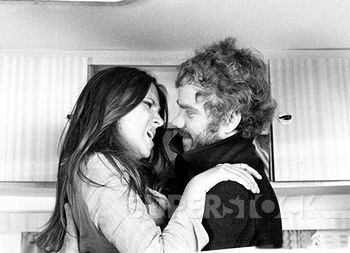 Ana Belen & Michael J. Pollard are NOT dancing in this scene from Morbo (1972).

An eerie, not-quite-right tone is established from the start as the camera prowls a sprawling country farmhouse in a state of decay. Vines and weeds are growing over the walls and windows and the rooms look dusty and deserted. But is the place really abandoned? We hear a man and woman having a conversation but the voices could be from an earlier time when they lived in the house. Or perhaps they are ghosts. The woman asks, “Do you like my hands? Do you like my face? Am I well groomed?” The man tries to compliment her but she erupts in anger. “I will never be again as I was before the fire…when my legs weren’t burnt and I attracted men.” We don’t see the couple conversing but their dialogue is punctuated by stark compositions of a shotgun leaning against a wall, an empty wheelchair, rats scurrying cross the floor and outside on the grounds, the charred remains of a forest fire. As the sound of a crackling fire fills the soundtrack, the credits begin over a wedding ceremony in a church. 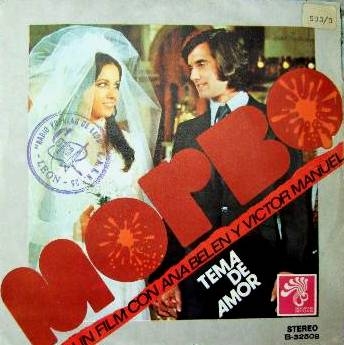 We follow the newlywed couple, Alice (Ana Belen) and Diego (Victor Manuel), as they exit the church and drive off in their bright red Sport Coupe with camper attached. Bride and groom drive deep into the countryside for their honeymoon and seem primed for sex and adventure. At a gas station, Alice strips off her wedding dress, revealing her sexy white fishnet bikini underneath while catching the eye of the station attendant. You might think that Alice’s uninhibited behavior is going to have repercussions a la Straw Dogs but Morbo is not that kind of movie. Instead, it toys with formulaic conventions without utilizing them and ends up defying easy categorization. [Spoilers ahead]

The couple drive off the main highway and onto a dirt road, ignoring the private property sign. They set up camp briefly at an arid cul-de-sac and sprawl on the hard earth, drinking champagne and eating food out of tins. Then Diego decides to have a brief look around and after discovering a rotting animal carcass (which he doesn’t mention to Alice), he drives Alice further down the dirt road, arriving at a clearing on the edge of a forest. This unscenic, remote location becomes their honeymoon spot for the next few days. At first the couple is passionate and carefree. They make love, carve their names into a tree, play an erotic game of tag with a large green ball and tear into their wedding gifts with a disrespectful glee. “What rubbish!” Diego mutters as the couple trashes colorful wrapped presents to reveal a Mona Lisa reproduction, a whiskey decanter, a fancy vase, an iron, all of which are discarded on the ground. 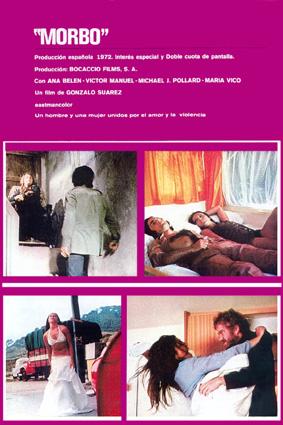 What begins in a spirit of liberation and spontaneity soon dissolves into something oppressive and ominous over the course of their stay. The couple begin to have petty quarrels that escalate into major confrontations, all of it fanned by a rising fear in Alice of being watched by someone or something (voyeurism becomes a thematic thread running through the movie). Though we occasionally see the couple from a point of view that suggests they are being stalked, director Suárez never confirms that fact which merely heightens the tension. The cliches we expect of the-terrified-couple genre thriller aren’t exploited here. Instead, the creepiness comes from subtle foreboding touches. A strange sound that turns out to be their car’s windshield wipers. Who turned them on? Or finding the bride and groom figurine from their wedding cake floating in a stream. In one scene, Alice pricks her leg on something on the ground and Diego picks up the object, saying, “It’s weird to find a hairpin out here.” It’s just another premonition of strange things to come. 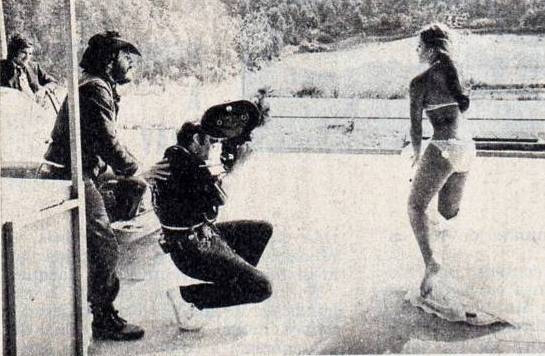 Ana Belen being filmed for a scene in Morbo (1972)

Unlike crazed-rural-family thrillers like The Hills Have Eyes or The Texas Chainsaw Massacre, Morbo is much closer in spirit to one of Ingmar Bergman’s brooding psychological dramas like Hour of the Wolf or The Passion of Anna. There are certainly touches of horror like the scene where Alice witnesses a pet hamster eat its companion, a moment that looks ahead to the nature gone amok paranoia of the Aussie thriller Long Weekend (1978). And the two co-dependent inhabitants of the farmhouse appear to be aroused and excited by the presence of the young lovers, suggesting they might be psychic vampires in the manner of Boris Karloff and Catherine Lacey in The Sorcerers (1967). There are also visually striking surreal touches such as the inflatable red and yellow plastic chairs that Diego and Alice use for lounging in a barren field or a wedding cake left in the sun that becomes insect food. Best of all is an odd shot of Alice’s eye peering through a hole in the wall of the farmhouse as she sees and hears the bizarre phantom couple talking about her: “Always naked. Her clean skin exposed to the sun.”

But the central focus of Morbo is the disintegrating relationship of the newlyweds who begin to drop their masks, revealing their true natures as the situation becomes more abnormal. Alice, the more perceptive and reactionary of the two, begins to realize early on that she and Diego don’t communicate well when they are cut off from all human contact. Even though they are free of social conventions in this remote natural setting and can make their own rules, the couple doesn’t become more intimate, they become estranged, even though Alice verbalizes this concern to Diego. “There are so many things to say about us but who dares to say them?”. 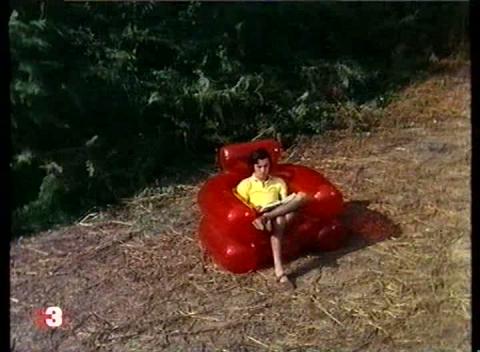 Victor Manuel plays an economist on his honeymoon doing homework in Morbo (1972).

Suárez’s exploration of the dynamics between Alice and Diego is what drives the narrative and keeps it compelling, even when it occasionally crosses the line into arty pretentiousness. And even though the climax feels rushed and not completely satisfying, Morbo stands out as an intriguing mixture of the commercial and the experimental. Like Peter Weir’s Picnic at Hanging Rock (1975), the film casts a strange, otherworldly spell and remains an enigma despite a resolution that sends Alice and Diego back to their bourgeois world, obviously changed forever by their experience.

Ana Belen, who has a successful singing career under the name Maria del Pilar Cuesta Acosta, is perfectly cast as the impulsive and highly emotional Alice while Victor Manuel is completely convincing as the priggish, self-absorbed Diego. In real life, the two actors fell in love during the filming of Morbo and married (they are still together and have two children). Manuel was a well established singer-songwriter when he met Belen and had only appeared in one TV movie. He would co-star with his wife in one more film after Morbo – Al diablo, con amor (1972), which was also directed by Gonzalo Suárez. After that, he abandoned acting in favor of music scoring and composing for films and television shows. 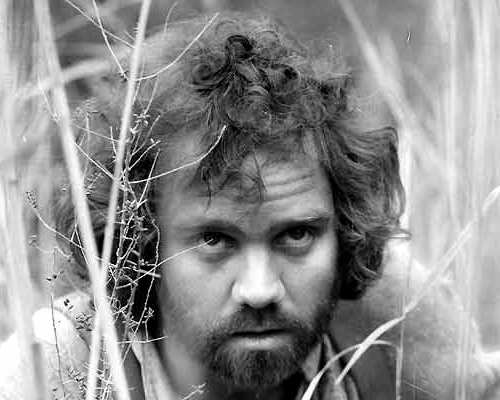 The real wild card in Morbo is Michael J. Pollard, who was enjoying a career high after the success of Bonnie and Clyde (1966). Morbo was made between Little Fauss and Big Halsy (1970), in which he co-starred with Robert Redford, and Dirty Little Billy (1972), an offbeat western in which he played the title role (Billy the Kid). He doesn’t make a proper appearance in Morbo until the final scenes of the movie and has maybe two lines of dialogue but his distinctly unique screen presence is well suited for a role that is basically a cipher. At the end, when he returns the wedding dress he stole from the couple’s car, you can’t tell if his self-amused smile is malevolent or good-natured. Nor can you tell if his intentions toward Alice in the camper are truly threatening or a matter of childlike curiosity.

In a role that is just as much a blank slate, Maria Vico plays Pollard’s blind, wheelchair-bound companion. She remains a tragic but shadowy figure until her shotgun-wielding finale. Vico should look familiar to fans of Eurotrash genre films, having appeared in numerous supporting roles in movies like Jess Franco’s 99 Women (1969), the spaghetti Western Light the Fuse…Sartana is Coming (1970) and Jorge Grau’s horror drama Ceremonia sangrienta (1973, aka The Legend of Blood Castle).

Morbo is the only film by Suárez I have seen but I am more than curious to see others. Unfortunately, there are very few options in the U.S. Netflix only carries two of his films – El Portico (2000), the story of a soccer player in the post-Spanish Civil War era circa 1948, and Rowing With the Wind (1988), starring Hugh Grant in a film about Percy Shelley, his mistress Mary, her stepsister Claire and Lord Byron at Lake Geneva (Ken Russell’s covered the same subject matter earlier in 1986’s Gothic). For those who want to see Morbo, you can purchase a very good subtitled, letterboxed print from ETC (European Trash Cinema) at CLJcl@aol.com.

Ana Belen eavesdrops on a disturbing conversation about her and her husband in Morbo (1972).

Outside of a small circle of film historians and movie buffs, Suárez remains relatively unknown in the U.S. and even Morbo (English title: Morbidness) isn’t that well known in his own country. After a successful career as a sports writer and journalist, he established himself as an author of avant-garde literature, publishing his first novel in 1963. Not long afterwards, he began dabbling in filmmaking and soon became part of a group known as the “Barcelona School,” which included directors Ricardo Bofill, Vicente Aranda and Joaquin Jordá, among others. Although Suárez was not from Barcelona, he claimed the city as his home and shared his fellow filmmakers’ interest in dark fantasies and metaphysical narratives. His first feature film, Ditirambo (1969), in which he also stars as the title character, a brooding, cerebral detective hero, set the tone for the unorthodox features that followed. El extrano case del doctor Fausto (The Strange Case of Doctor Faust), in which he played Mephistopheles, was his own personal take on Christopher Marlowe’s famous story and Aoom (1970), which was never released theatrically, are considered high points of Spanish avant-garde cinema. Suárez’s later work, though more accessible and less challenging, was often adapted from famous literary works such as Moliere’s Don Juan in Hell (1991), probably his most highly regarded film, and Mi hombre es sombra (My Name is Shadow, 1996), which is based on Robert Luis Stevenson’s Dr. Jekyll and Mr. Hyde. Ironically, Suárez is probably best known to American audiences as an actor; he played the alcoholic writer with a Hitler fixation in Pedro Almodovar’s What Have I Done to Deserve This? (1984). Suárez is still active and working today; his last effort to date is the screenplay for The Sale of Paradise (2012). 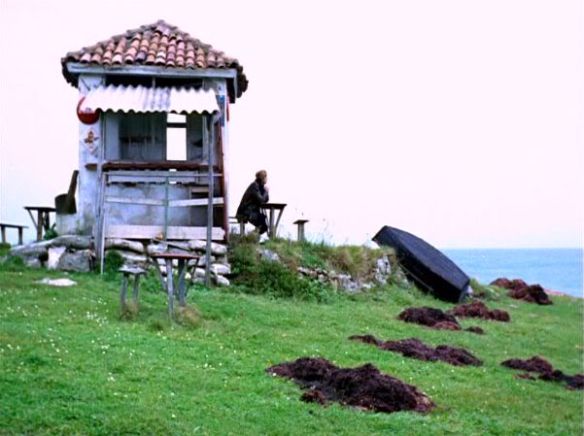 2 thoughts on “The Deconstructed Honeymoon”