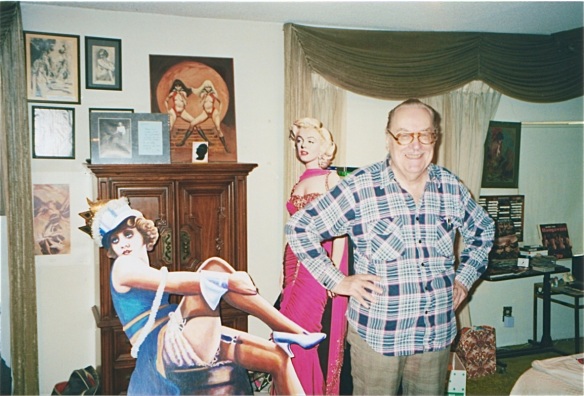 Forry Ackerman in his guest room at the Ackermansion (1998) photo by J.Stafford

I never would have imagined when I was a geeky eleven year old kid hooked on Famous Monsters of Filmland magazine that I would one day meet the brainiac behind it – Forrest J. Ackerman – and be invited inside the world famous Ackermansion. It happened while I was visiting friends in Los Angeles in February 1998.

Beverly, an old high school friend living in Los Angeles, knew I was addicted to horror films after being dragged to a few that she regretted (Blackenstein, Armando Crispino’s The Dead Are Alive, and Roman Polanski’s ultra-violent MacBeth, which qualifies as a horror film). When I first talked to her about visiting, she casually mentioned that Ackerman had an open house at his home on Glendower Avenue in Los Feliz every Saturday for his fans (It was located in the Lincoln Park area of L.A., not far from the Griffith Park Observatory). So that was one activity that became a must on my list and I made sure to pack a favorite Famous Monsters of Filmland issue (no. 30) for a photo op. 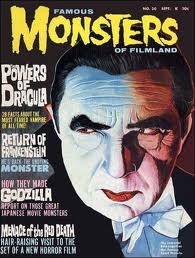 The day finally arrived and our group, consisting of me, my wife Beth, Beverly and her housemate Shohanna, made our way up a winding road to the top of a hill overlooking the Los Feliz neighborhood and there it stood – the famous Ackermansion. To my surprise there was not a big mob at the door waiting for Forry to show his face. Instead, there were only a few fan boys milling about, one of whom was a college student from Japan who barely spoke a few words of English. 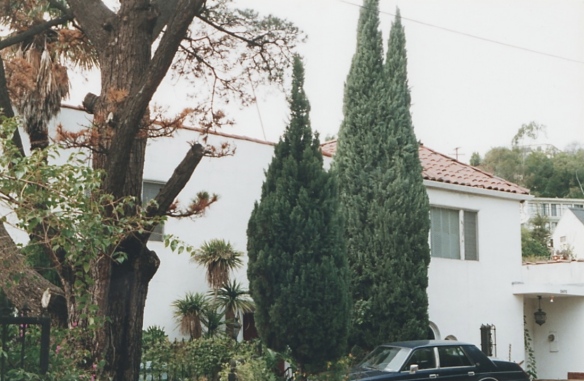 The Ackermansion on Glendower Avenue in Los Angeles (1998) photo by J. Stafford

Eventually someone appeared at the door – a personal assistant perhaps – and beckoned us inside. We were led to a large study with a wide window view of the city below and there was Forry, ready to hold court. He couldn’t have been more welcoming or friendly and told us to look around and ask him any questions. Receiving female visitors at the Ackermansion was probably a refreshing change from the usual fan boy which might explain why Forry came over to Bev, Sho and Beth right away and offered to give us a personal tour of his house/museum. 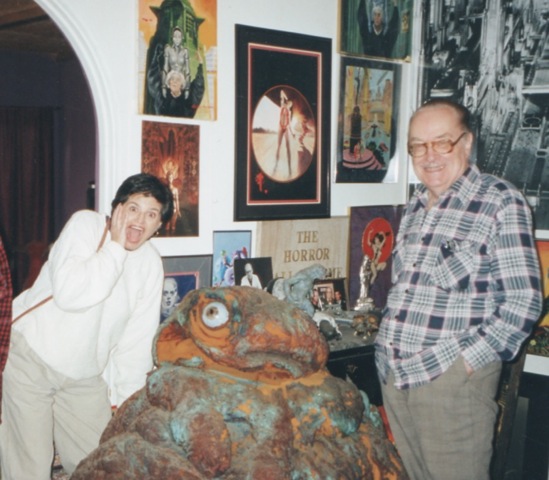 He seemed particularly taken with Sho and before we left that day he was flirting with her in Esperanto. 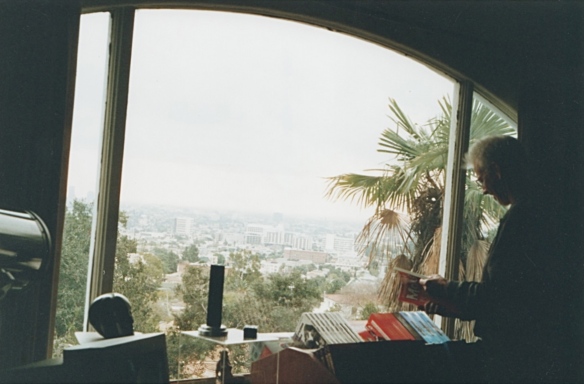 The view from Forry Ackerman’s study at his Los Angeles home on Glendower Avenue (1998) photo by B. Boston

Forry mentioned his late wife Wendy (Wendayne) several times and said how much he missed her. They were on a vacation in Europe in 1990 and while visiting Italy she was mugged and suffered a head injury that resulted in her death not long afterwards. I had never heard this sad story before and it was obvious that Forry was still grieving for her as if it happened yesterday. His mood brightened though when Sho asked (with a wink) where he slept in this maze of memorabilia and he resumed the tour. 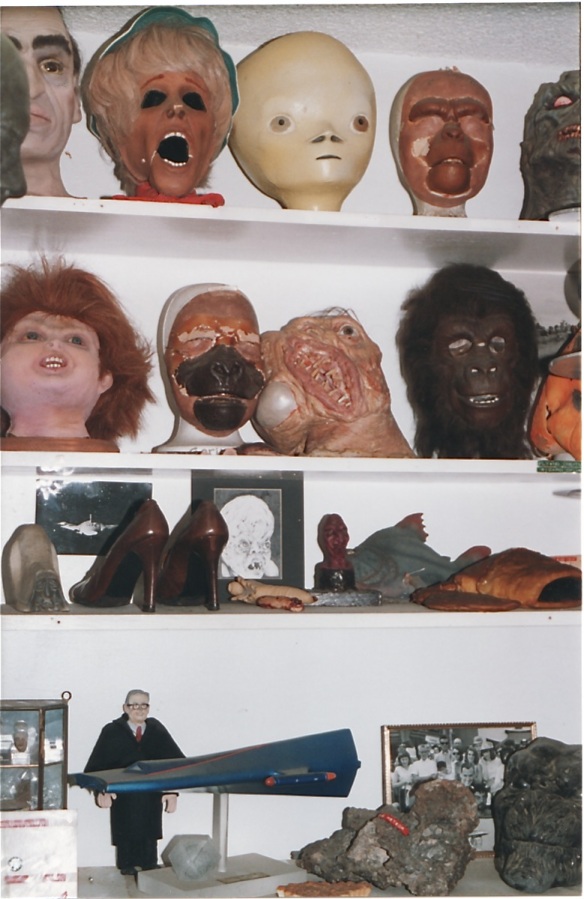 One of many shelves filled with collectibles at The Ackermansion (1998) photo by J. Stafford

I recall going into a guest room at the top of some stairs. It was hard to forget because the room was dominated by two standees – one of Marlene Dietrich, posing as Lola Lola from The Blue Angel, the other Marilyn Monroe in a clingy lavender outfit from either Gentlemen Prefer Blondes or How to Marry a Millionaire.  At the time, a fan boy from Europe was staying in the guest room. According to most people who knew Forry well, it was not at all unusual for him to invite Famous Monsters fans into his home to browse around or even stay there while visiting Los Angeles. He was a kind, trusting soul and his generosity was sometimes taken advantage of. Over the years, some of his archival treasures went missing and, in one instance, a so-called fan tried to sell Forry’s sound disc of Frankenstein that he had stolen back to him. “Every once in awhile my heart would be broken when something would disappear,” Ackerman admitted in an article in The Daily Mirror by Hilary E. MacGregor. “My wife used to say, ‘What have they stolen now? Why do you let all these strangers come?’ But what’s the use of having 300,000 interesting things if I just sit up here, a crotchety old codger in his house on the hill.” 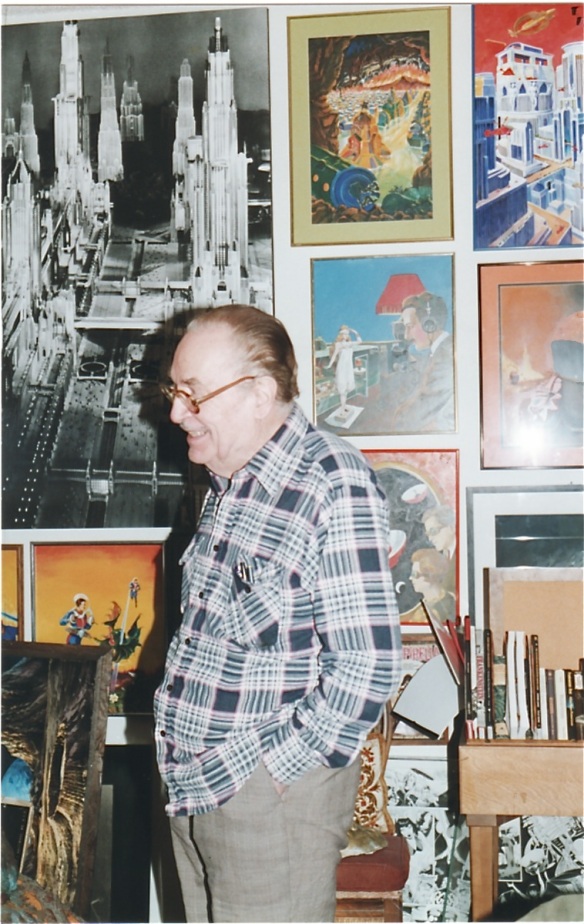 Forry Ackerman at his home in Los Angeles on Glendower Avenue (1998) photo by J. Stafford

There had been a major rainstorm recently and Forry complained about some leaks in the roof that had resulted in some water damage to his collection. So much of the memorabilia in the Ackermansion included paper material – books, magazines, paperbacks, posters – and there was no denying a pervasive smell of dampness and mildew, obviously the result of the leaks. But for the most part, the wealth of material on display was still in good shape and overwhelming to an almost claustrophobic degree with rooms filled with floor to ceiling displays that made for tight quarters. It was said that he had over 50,000 books and 100,000 film stills and memorabilia. 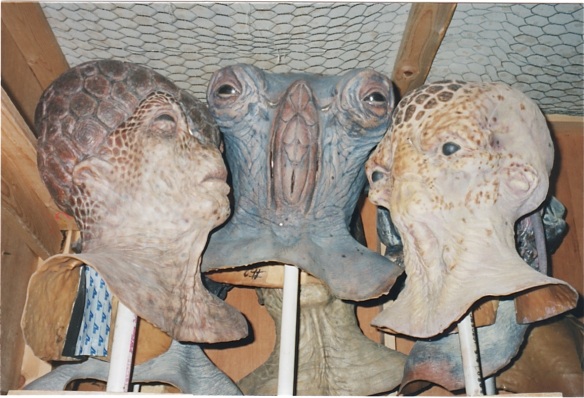 From the Collection of Forrest J. Ackerman at the famous Ackermansion (1998) photo by J. Stafford

During his lifetime Ackerman had received offers from investors to sell his collection but nothing ever panned out. When his health began to fail and he moved into a small bungalow in 2002 that he dubbed “The Acker Mini-Mansion,” he tried again to sell the collection in its entirety but no one made an offer so he began selling it piecemeal. I always thought some of the successful Hollywood directors he had influenced and inspired as kids such as George Lucas and Steven Spielberg would come forward with the money to create a museum in his honor but this never happened. 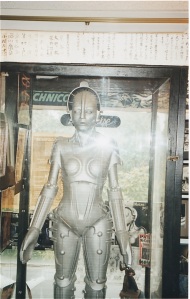 The fiberglass replica of Maria the Robotrix from Metropolis in Forry Ackerman’s collection (1998) photo b J. Stafford

Forry died on December 4, 2008 at age 92 and, on May 2, 2009, the remainder of his collectibles went on sale at an auction where it garnered a quarter of a million dollars. Among the prized possessions sold were a fiberglass replica of Maria the Robotrix from Fritz Lang’s Metropolis which had been built by special effects artist Bill Malone ($40,000), the top hat worn by Lon Chaney in London After Midnight ($27,500) and a nude statue of Marlene Dietrich which Forry had commissioned ($9,000). 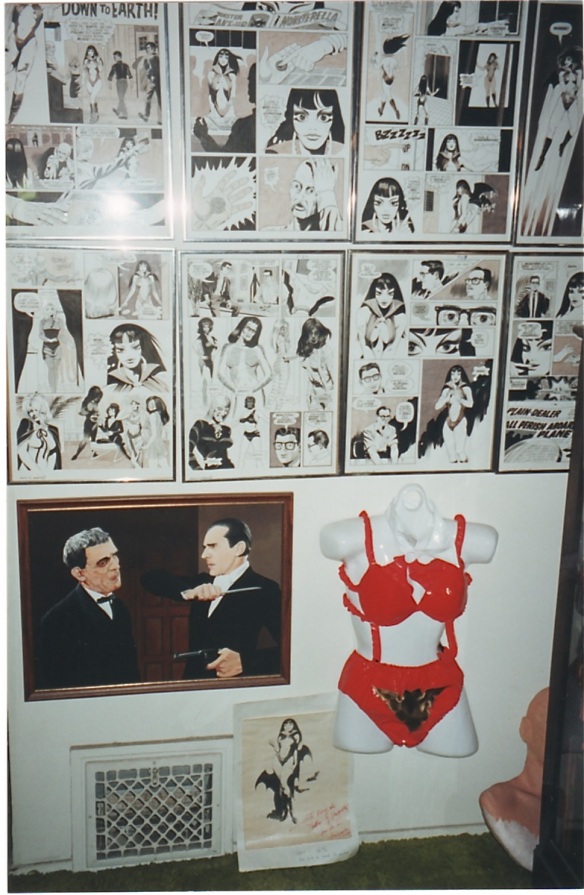 From the private collection of Forrest J. Ackerman (1998) photo by J. Stafford

I’ll always feel grateful for the opportunity to have met Forry and to have been a guest in his Ackermanion. Like many other kids my age, he was the one who fed our fantasy life and taught us so much about the horror and sci-fi (a term he coined) film genres through Famous Monsters of Filmland and other publications like Monster World. I can still remember my initial discovery of Forry’s trailblazing horror fanzine in July of 1962. I was visiting Dalton, Georgia during my family’s annual summer trip there to see my grandparents and relatives. There was a newspaper/magazine store downtown called Ace News where my older brother liked to go and check out the baseball cards. We went there one July day and I saw this magazine on the rack with a cover that immediately grabbed me. The leering, hideous face was an artistic rendering of Dwight Frye from his role as Renfield in 1931’s Dracula but I didn’t know that at the time. I just knew that I had to have that magazine. It was particularly odd to have discovered Famous Monsters of Filmland at a newstand in small town Dalton, Georgia and not in my home, Richmond, Virginia, where it should have been available in any comic or magazine shop but….gaining access to the world of Forry was the important thing. 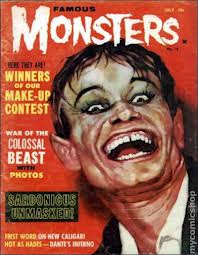 In some ways, buying that first issue (number 18, published July 1962) was a transformative experience for me. I poured over the thing, studying the photos, reading the articles and fantasizing about all the merchandise that was sold in the magazine’s back pages which my parents would deny me no matter how much I tried to negotiate – “Genuine Official U.S. Government Surplus Astronaut Space Suit,” “Own a Pair of Mated Live Sea Horses,” “Tremendous 30 Ft. Balloons,” “A Complete Set of 5 Different Monster Rings” and countless horror masks, 8mm movies, models and horror soundtrack albums. 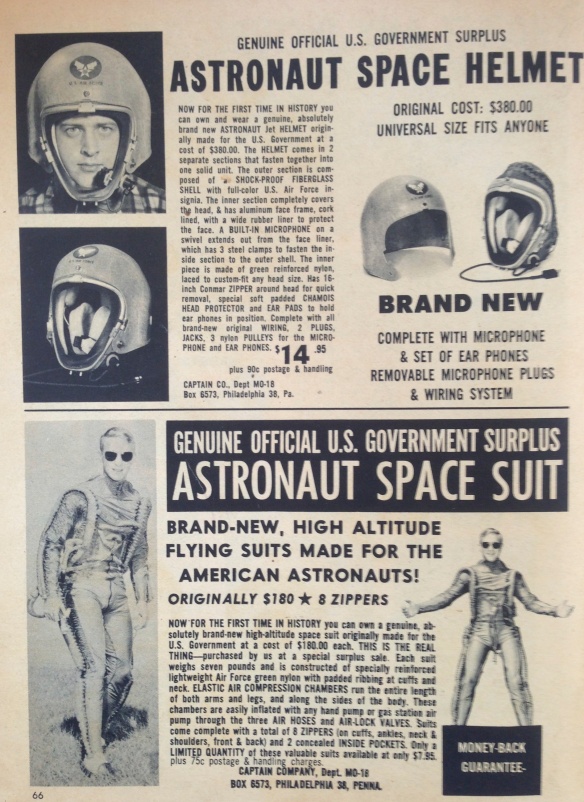 A typical ad page from Famous Monsters of Filmland

I still have that first Famous Monsters of Filmland purchase, although in a much more ragged form; the cover is now unattached, the pages are yellow but I can still remember the impact the content had on me. That #18 issue also made me want to write about movies, thanks to an article called “Dante’s Inferno” by future director Joe Dante, who would have been around fifteen years old at the time. He presented his candidates for the top 50 worst fantasy films of all time and I was inspired to write tiny caption reviews next to some of his on the pages. For example, on Rodan, which he dismissed as “another routine (Japanese) prehistoric-monster-on-the-loose melodrama, inferior to many U.S. productions,” I penciled in “good; special effects, screenplay, etc. at its best.” Ya can’t get much nerdier than that. I wonder how Dante feels about that list now since some of the films he deemed as the worst have endured as favorite cult items like The Blob, Attack of the 50 Foot Woman and Plan 9 From Outer Space. 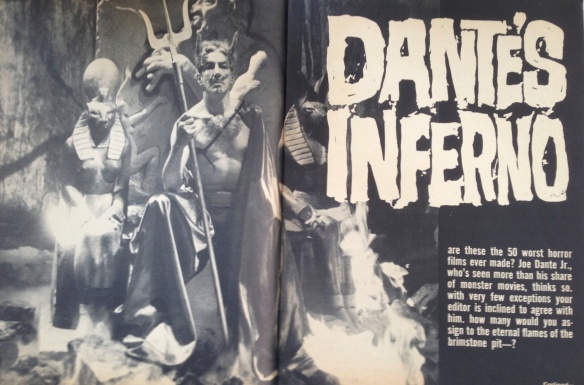 When I visited Forry that February in 1998, I got him to sign my worn copy of issue number 30 showcasing Bela Lugosi as Dracula. Instead of putting his signature on the cover, however, Forry suggested a better place to put it and turned to an article called “Werewolf in Monsterland” about monster fanatic Val Warren and his trip to Horrorwood (as Forry called it) for winning the Famous Monsters of Filmland’s makeup contest. At the left top corner of a photo featuring AIP president James Nicholson, Val Warren in werewolf makeup, and guess who?, Forry signed his name and then drew a little arrow pointing to his head, just in case I forgot who he was. Fat chance. 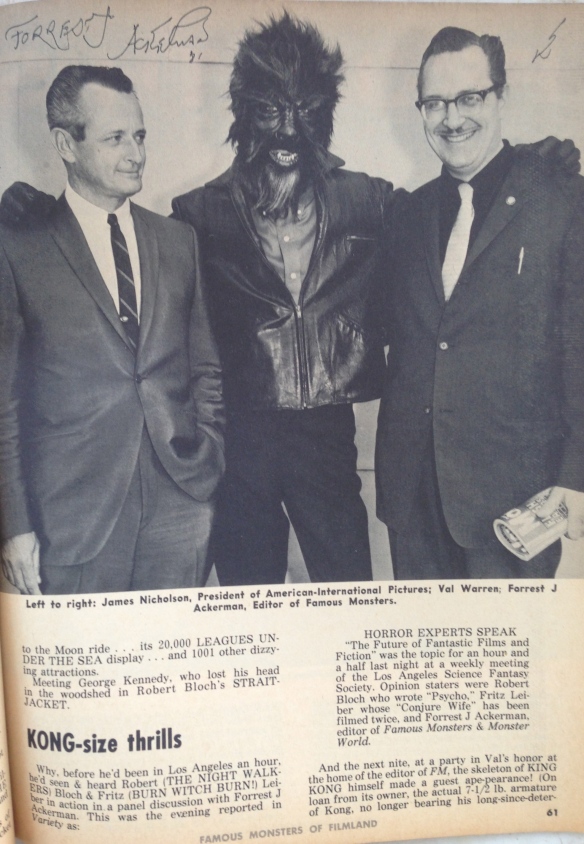 Other Links of Interest:

Tour of his house 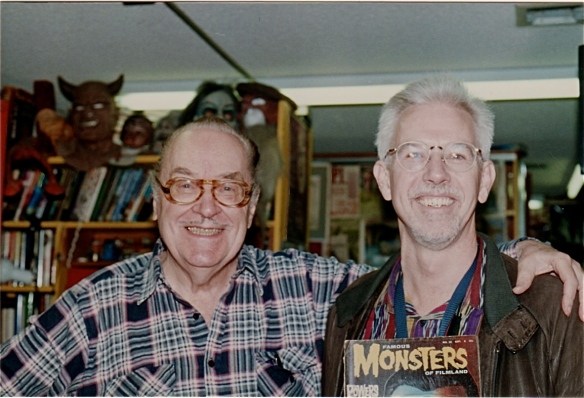