Released in 1951 by Warner Bros. and often considered a film noir by some film buffs and critics, the little known TOMORROW IS ANOTHER DAY is a hard-to-peg but exceptional B-movie that proves to be something of a shape shifter in the genre department. The title is bland but also deceptive in the sense that it calls to mind a completely different and inappropriate reference – Margaret Mitchell’s Gone With the Wind. The movie is also not true noir because, by general consensus and tradition, a noir can’t have a happy ending yet the two main characters – a bitter ex-con and a gold digging taxi dancer – are archetypes from a noir universe who try to flee their circumstances and still find redemption in the end. Along the way, the film effortlessly morphs from one cinematic convention to another, starting with a social reform drama (shades of Heroes for Sale or I Am a Fugitive From a Chain Gang) in the gritty Warner Bros. tradition before detouring into noir. Then the tone quickly changes as the movie moves from the city to the rural backroads, becoming first a road trip/pursuit thriller of the paranoid kind, then a romance of thwarted lovers and finally an ethnographic slice of Americana that introduces a migrant worker subculture and the socio-economic hardships that come with it a la The Grapes of Wrath.

Mixed messages are sent from the beginning as the credits for TOMORROW IS ANOTHER DAY appear over a graphic of a man, alone on a cliff ledge, gazing at a cloudy sky with some rays of sunshine breaking through in the distance to the tune of an emotionally overblown theme song. The man is Bill Clark (Steve Cochran), who has spent most of his life in prison but is finally paroled at the age of 32. He entered the slammer at 13 after killing his sadistic brute of a father (the term child abuse was not common then) and is now emotionally stunted and unprepared for life outside prison walls. The warden cautions him about his prospects, saying “A lot of things have changed out there…Your generation grew up, married, raised families, went to war but nothing happened to you Bill. You just got older….the average person outside won’t accept you. Won’t hire you, won’t trust you. You won’t even have a vote.” (The 14th Amendment permits states to deny the vote “for participation in rebellion, or other crime.”).

The future for Bill looks bleak indeed as he wanders around his home town on his first day of freedom….and finds trouble almost immediately in the form of an incognito reporter (John Kellogg) looking for a news story. Bill’s chances for a normal life there are ruined when his background is revealed in a front page expose – “Bill Clark, State’s Youngest Murderer, Returns” – so he hops a train to New York City where worse things await him. An encounter with Cay (Ruth Roman as a blonde), a streetwise club dancer – there would be no ambiguity about her profession in the Pre-Code era – develops into an intense infatuation but there are complications. 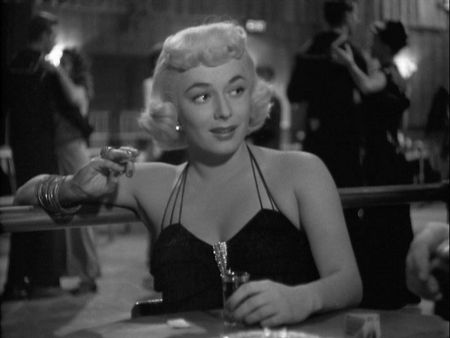 Cay’s “benefactor,” George Conover (Hugh Sanders) shows up and the trio end up in a brawl with Bill knocked unconscious and Cay mortally wounding Conover with his gun (she lets Bill think he was the trigger man). Fearing arrest, the couple flee the city and began a haphazard road trip while posing as a married couple.

By the time Cay and Bill check into a roadside motor court under aliases, TOMORROW IS ANOTHER NIGHT veers off a conventional noir path and becomes a love story of two hard luck losers who might make it as a couple if they can learn to trust each other….but will society give them a break?

For awhile, the future looks promising as the couple find work and a place to live with some friendly migrant workers, Mr. and Mrs. Dawson (Ray Teal & Lurene Tuttle) and their son (Robert Hyatt). But when the Dawsons discover Bill’s true identity in a crime magazine that offers a $1,000 reward for his capture, their sense of loyalty is conflicted and throws them into a moral quandary.
Mrs. Dawson: You’re not gonna get mixed up in it.
Mr. Dawson: Even if it’s true?
Mrs. Dawson: Let somebody else turn him in.
Mr. Dawson: And collect the reward? That’s a $1,000 bucks. Maybe we don’t need it.
Mrs. Dawson: Not that kind of money.
Mr. Dawson: There’s only one kind of money and we haven’t seen much of it. No home, nothing that belongs to us and we’re not getting any younger. C’mon Stella, say yes.
Mrs. Dawson: We haven’t got much. But everything we have is ours. Nobody else had to pay for it.

The situation becomes dire when Mr. Dawson is seriously burned in an auto accident and only an expensive new medical treatment offers any hope for his recovery. Will Mrs. Dawson betray her new friends for the reward money? The way TOMORROW IS ANOTHER DAY resolves this dilemma plays out in unexpected ways and, if the ending seems compromised and studio-imposed, the film still lingers in the memory as one of the more emotionally satisfying B-movies of its era. 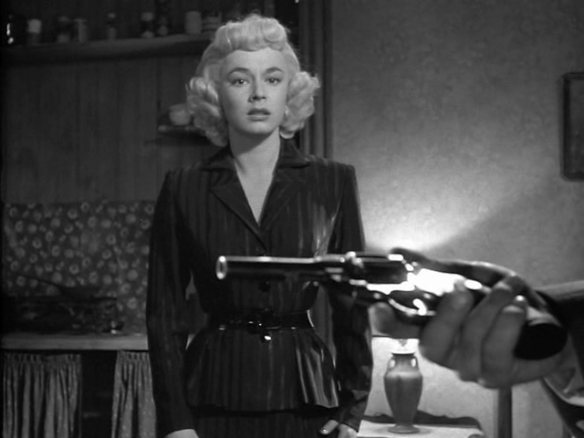 Part of this is due to the terse, economic direction of Felix E. Feist, who trims away any narrative fat, achieving a streamlined journey into darkness and back into light. Most film buffs know that Feist is a first rate B-movie stylist who turned out such cult items as The Devil Thumbs a Ride (1947), one of the most horrific of any noir thriller, This Woman is Dangerous (1952) with Joan Crawford and Donovan’s Brain (1953) featuring soon-to-be-First-Lady Nancy Davis Reagan. The screenplay and dialogue by Art Cohn (who died in the same plane crash that killed movie mogul Mike Todd) and Guy Endore (who was blacklisted during the fifties) is equally tough and smart. And the casting and ensemble performances lift TOMORROW IS ANOTHER DAY out of the average B-programmer rut. 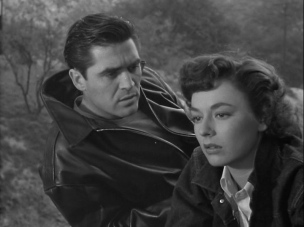 Steve Cochran and Ruth Roman make a curiously appealing couple and Cochran has more than enough onscreen chutzpah to counterbalance Roman’s too-much-woman-for-you presence which can overwhelm a less forceful actor…like Farley Granger in Strangers on a Train. Although Cochran was already being stereotyped as a smooth villain at this point in his career, he generates a believable vulnerability here, combined with misdirected aggression, as someone who is finally coming to terms with the adult inside him. And Roman is never less than believable as a tough, manipulative working gal who has had to harden her heart to survive. The real turning point for her character (signified by dying her blonde hair to brunette) is when she drops the mask and reacts to Bill’s marriage proposal, an emotional moment for both that reveals what their characters secretly want but are afraid they can’t have or don’t deserve. 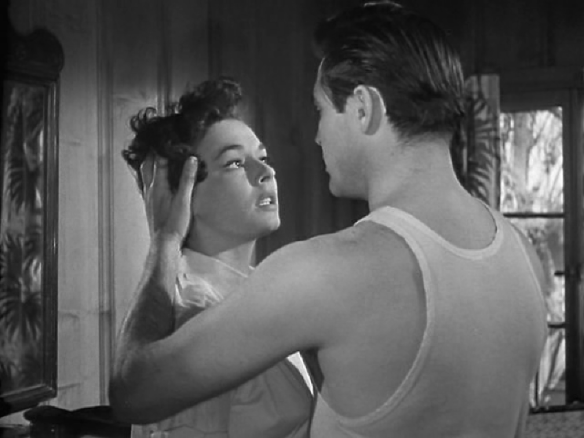 There are other things to admire in TOMORROW IS ANOTHER DAY such as the glistening cinematography of Robert Burks (Oscar nominee for Strangers on a Train, Rear Window, To Catch a Thief & A Patch of Blue), an unobtrusive but effective dramatic score (except for the opening theme) by Daniele Amfitheatrof (The Naked Jungle, Human Desire) and beautifully executed sequences, edited by Alan Crosland Jr. (The Breaking Point, Vera Cruz), such as Cochran and Roman’s nocturnal attempt to sneak aboard a trucker’s automobile transport without being discovered. 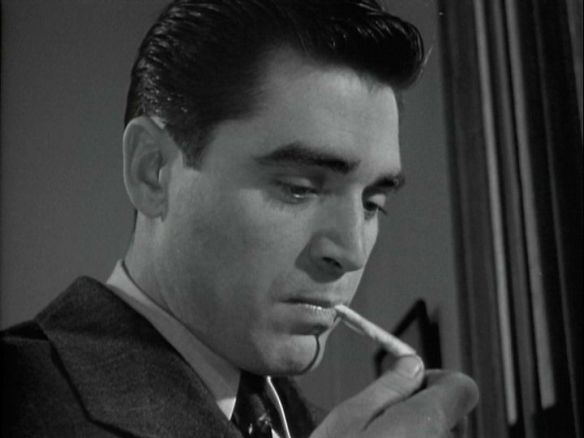 Without wanting to oversell it – and this is a movie that works best if you just take a chance on a film with the unpromising title of TOMORROW IS ANOTHER DAY – I have to say that the movie becomes richer on subsequent viewings (It was initially released on DVD from Warner Archives in 2006). It’s the incidental details that stand out – the hunger in Bill’s face when he spots an attractive young woman on the street his first day out of jail and starts following her, staring at her legs; Cay’s verbal cat fight with a dancer at the Dream Land Dance club ending with “This is a refined place for refined people.” (She pronounces refined as re-fiended); the scene where Bill gives Cay a gold-plated watch that becomes an item of barter between them, being accepted and rejected repeatedly as an ongoing motif for their evolving relationship; the slow pan up from Bill and Cay’s feet as they hitchhike down the highway, dressed in denim with rolled up cuffs (fashion alert!); the pain in Stella Dawson’s face as she smacks her son for wanting to watch what happens when the police arrive to arrest Bill. I could go on but here is what I love most of all – the idea of a Hollywood B-movie examining the lower rung of society with empathy and no sermonizing and still delivering a compelling entertainment.

TOMORROW IS ANOTHER DAY is ultimately the story of two lost souls who find themselves and each other after years of personal pain and despair. And the path to redemption for these misfits, living on the fringes of society, is unexpectedly moving in ways that utilize every film genre with noir as the driving force that launches the journey. 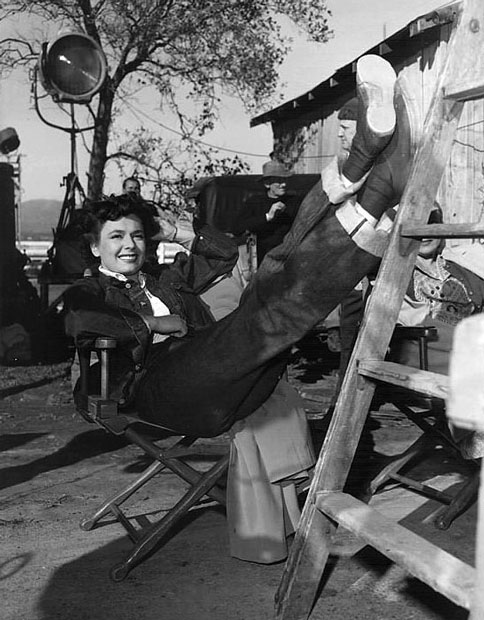 Tomorrow is Another Day was released on DVD by the Warner Archive Collection in October 2010 as a stand alone disc with no extra features and is still your only option to see this except for occasional showings on TCM.

2 thoughts on “Hitchhike Into Darkness: Tomorrow is Another Day”