Rarely seen in the U.S. and not one of the better known films about a famous mountain-climbing expedition, The Challenge (1938) is an intriguing bridge between the German mountain films of Arnold Fanck (White Hell of Pitz Palu, 1929) and contemporary man-against-nature survival tales such as Philipp Stozl’s Northface (2008), where two Germans and two Austrians try to scale the Eiger in Switzerland, and Kevin Macdonald’s documentary reenactment Touching the Void (2003), the ill-fated trek by Joe Simpson and Simon Yates up the face of the Siula Grande in the Peruvian Andes. Luis Trenker, one of the stars of The Challenge, was honored in person at the Telluride Film Festival in 1983 at age 90 and Turner Classic Movies aired the film in one of their Telluride programming tributes in 2010. The Challenge was also offered on The Criterion Channel. 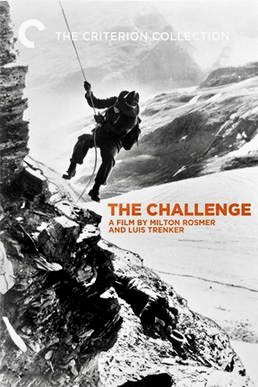 Filmmaker Luis Trenker on the set of Berge in Flammen (1931) aka Mountains of Fire.

Trenker (1882-1990) was a famous alpinist, skier, architect and filmmaker who entered the film industry as an actor, working first with Arnold Fanck on Der Berg des Schicksals (1924, aka The Mountaineers) and later opposite actress Leni Riefenstahl in two key entries in the German Mountain film genre, Der Heilige Berg (1926, aka The Holy Mountain) and Der grobe Sprung (1927, aka The Great Leap). He took on the additional duties of producing, writing and directing in 1929-1930, serving as a co-producer of Der Ruf des Nordens (1929), contributing to the screenplay of Mario Bonnard’s Les chevaliers de la montagne (1930) and co-directing De Sohn der weiben Berge (1930 aka The Son of the White Mountain). Trenker’s rugged good looks, athleticism and mountaineering/skiing skills made him a natural lead for the romanticized adventure tales in which he starred. These movies also glorified the outdoors and natural landscapes while celebrating man’s attempts to explore and test himself in these environments. 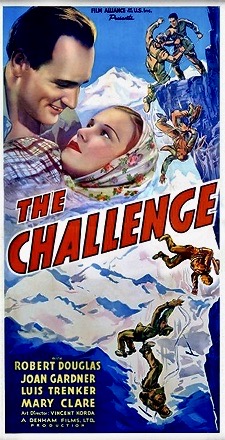 The Challenge, however, is an anomaly. By no means great cinema, it is interesting for a lot of reasons. It was one of the first forays into the “Mountain film” genre by British filmmakers and clearly an attempt to carve out their own national identity in this area. After all, it is based on a true story – the first successful attempt to scale the Matterhorn in 1865 by an English-led team of explorers. Emeric Pressburger, prior to his partnership with director Michael Powell, is one of the co-authors of the screenplay, and Vincent Korda was the supervising art director on the film. Most importantly, Luis Trenker, who was so strongly associated with this type of film, was recruited to co-direct The Challenge with Milton Rosmer and to play Jean Antoine Carrel, the famous Italian mountain climber. (Trenker was was born in Urtijei, in the Dolemites, which was then part of the Austro-Hungarian Empire; it is now a town in Italy). 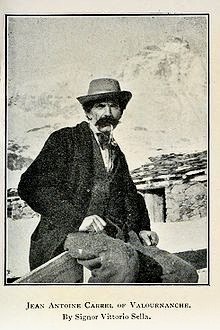 The real-life Jean Antoine Carrel who is portrayed by Luis Trenker in the 1938 film, The Challenge.

The movie takes dramatic liberties with the real story which is usually expected in any cinematic treatment of an actual event. It also introduces a lot of other elements that render it a mixed genre film. It’s an adventure drama, a buddy movie, a culture clash melodrama and a pre-WWII morale builder for the British moviegoing public. When the story begins, Edward Whymper (Robert Douglas), an artist and engraver who sketches mountains for his London publisher, meets Carrel while climbing the side of the Matterhorn and hires him as a guide. Weather prevents them from ascending to the top but Whymper later tries the climb on his own without telling Carrel and is injured and then rescued by his guide. While he is recuperating, Whymper abandons his competition with Carrel and proposes they team up together as equals the following year and tackle the peak again. 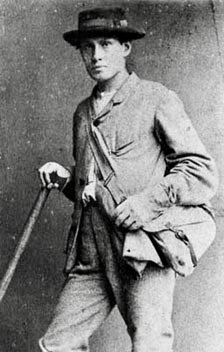 English mountaineer Edward Whymper who is portrayed by Robert Douglas in The Challenge (1938), directed by Milton Rosmer.

In the meantime, the Italian government realizes the importance of conquering the Matterhorn for reasons of both commerce (tourism) and national pride, they pressure Carrel to abandon the Englishman and claim the peak in honor of his fellow villagers and countrymen. By the time, Whymper returns to the village of Breuil, where the expedition is based, he learns that Carrel has his own team of climbers, assembled from the best local alpiners, and is preparing to race him to the top. The rest of the movie depicts these events, which result in a victorious climb for Whymper followed by an unforeseen tragedy – four of his climbers fall to their death on the descent.

Jean Antoine Carrel (Luis Trenker, left) and Edward Whymper (Robert Douglas) star in a true life drama about a race to the top of the Matterhorn in The Challenge (1938).

The story doesn’t end there and, in the tragic aftermath, villagers blame Whymper for the deaths of the four men, claiming he cut the rope to save his own life. When it appears that the enraged locals might inflict harm on the English explorer, Carrel comes to the rescue, rushing out into the howling winds to climb the Matterhorn in search of the evidence, convinced the rope wasn’t cut. All of this builds to a dramatic finale and the expected happy ending but the real life story had no pat resolution and questions linger today.

As Luis Trenker was already internationally famous as a German film star and world class alpiner, there must have been great anticipation surrounding his appearance in The Challenge, even though it was not his first English language film; he had previously appeared in Doomed Batallion (1932) and The Rebel (1933). And this turns out to be one of the film’s major drawbacks. Speaking in a foreign language does not come easy to Trenker and his performance suffers as a result. He comes across as a simplistic, one-dimensional hero – strong, courageous, proud and a little dim.

As his friend-turned-rival, Robert Douglas is not much better, providing an acceptable but colorless performance as the very British Whymper. There are other problems too such as the uneven direction which flags during interior exposition scenes but comes to life during the outdoor sequences. Often the scenes set in the competing villages of Breuil and Zermatt, both serving as entry points to different routes up the Matterhorn, seem like an unintentional parody of provincial life with low brow humor involving a goat (who is always shown eating something), a wily innkeeper and a local constable who treats every stranger in town as a potential border-crossing smuggler.

A scene from the mountaineer drama, The Challenge (1938), a British film directed by Milton Rosmer.

Early in the movie we see some villagers in the local pub grumbling about Whymper and they seem like the sort of superstitious peasants depicted in Universal horror films. The village priest gravely says, “There are secrets up there the mountain says must not be found out.” As if on cue we hear thunder and lightning flashes outside the window as the priest notes, “It’s saying so now….The devil sends the fools and the mountain sends the storms to destroy them.” This insular, almost pagan world view of the villagers provides a marked contrast to the Italian government emissary and other outside officials who see the commerce advantage in whichever town becomes famous for hosting the team that conquered the Matterhorn.

Much more compelling are the mountain-climbing sequences in The Challenge. The often stunning cinematography is by Albert Benitz (The Captain from Kopenick, 1956) and Georges Perinal (Bonjour Tristesse, 1958). The beauty, allure and danger of the Matterhorn is captured vividly and there is one genuinely harrowing passage when Whymper’s team begins to descend the peak. When the rope breaks and four men tumble to their death, the moment is startlingly realistic, even shocking, with its long, lingering view of the falling bodies. 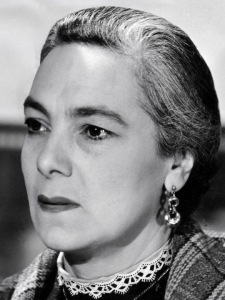 The great British character actress Mary Clare is featured in The Challenge (1938).

Adding some much-needed dramatic weight to the story is Mary Clare as Carrel’s indomitable mother. She’s like a force of nature, tempestuous yet righteous, and clearly capable of standing up to and repelling a crowd of villagers who suspect her son of siding with the British intruders. Most movie lovers will remember Clare from her sinister role as the Countess in Alfred Hitchcock’s The Lady Vanishes (1936) or her portrayal of Mrs. Corney in the 1948 film adaptation of Charles Dickens’ Oliver Twist, directed by David Lean. 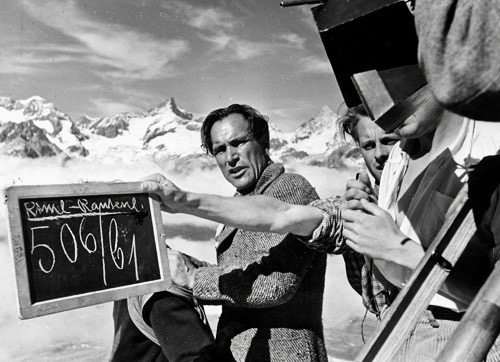 Trenker Luis – actor mountaineer at the shooting for the film ‘Der Berg ruft’ aka The Mountain Calls, Germany 1938 – 1938 Vintage. Photo by: Ullstein/Everett Collection

Unlike his former co-star Leni Reifenstahl, who would go on to glorify the Aryan ideal in films which became recruitments for the Nazi party (Triumph of the Will, 1935), Trenker was never a willing accomplice in the German government’s exploitation of his movies. Despite later accusations of aiding Nazi propagandists with his idealized view of the German people, that was not his intention at all. Trenker’s pastoral dramas were actually celebrations of rural people living in harmony with nature, away from the corrupting influences of urban life. According to most biographical sources and film scholars Trenker’s directorial efforts were not limited to mountain-climbing adventures and that some of his best work were documentaries and dramas inspired by his World War I experiences. Some sources even cite that his later films were precursors to the Neorealism movement of Italian cinema.

Even if The Challenge is not the best introduction to Trenker as an actor, you still might be able to find an out of print VHS copy of it from 1994 or the DVD release from Firecake Entertainment that came out in 2010. You can also currently view it on Youtube. The good news is that other, more representative films of Trenker are still available in some format. Kino Lorber offers The Holy Mountain (1926, aka Der Heilige Berg) and The Great Leap (1927, Der Grobe Sprung) in both DVD and Blu-Ray editions. Mountains on Fire (1931, Berge in Flammen) is available on DVD from International Historic Films, Inc. And if you have an all-region DVD player, you might be able to find German import releases of his films (often without English subtitles). Still, until someone mounts a retrospective of Trenker’s work or releases a collection of his best work on Blu-ray, the actor/writer/director remains an almost forgotten figure in cinema history. 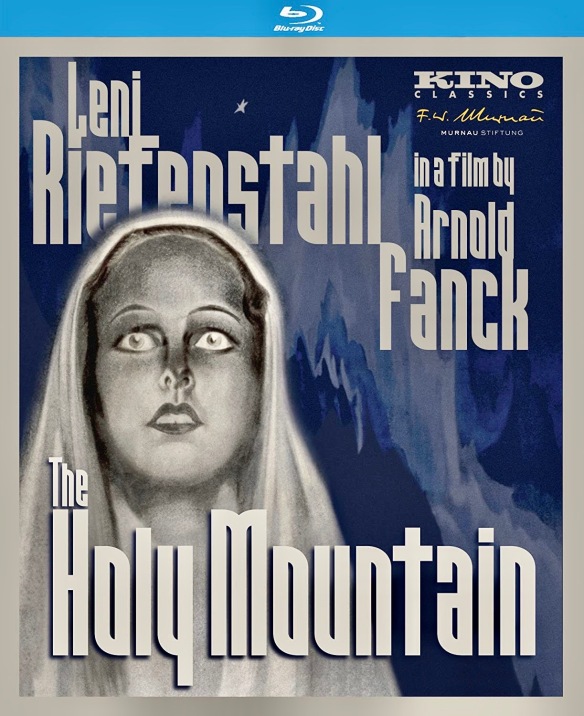