When social order breaks down, rational thought or common sense do not always follow. The result could be the kind of mass paranoia and hysteria that created the persecution of people as witches in Europe during the 13th to 15th century as well as in America (the Salem Witchcraft Trials of 1692). That shameful chapter in history has been the subject of numerous books and literary works such as Arthur Miller’s 1953 play The Crucible.  As for the cinema, most movie critics seem to agree that the finest film to ever address this kind of aberrant phenomenon is Carl Theodore Dreyer’s Vredens dag (1943, English title: Day of Wrath).

Set in a small village in Denmark in 1623, Day of Wrath (1943) tells the story of Anne, the young wife of Pastor Pedersson. Trapped in a loveless marriage and hated by her mother-in-law, she seeks solace in a love affair with her stepson Martin. Her indiscretion ultimately seals her fate; Anne’s husband dies of a heart attack when he learns of her infidelity, Martin deserts her and the villagers accuse her of witchcraft, a charge which condemns her to be burned at the stake. 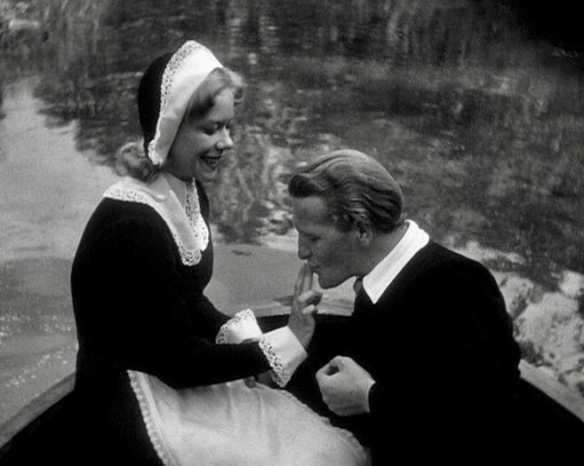 Anne (Lisbeth Movin) and her stepson Martin (Preben Lerdorff Rye) have a secret rendezvous in Day of Wrath (1943), directed by Carl Dreyer.

Day of Wrath, Dreyer’s second sound feature, was based on real events that took place in Bergen, Norway in the sixteenth century and became the basis for a play by Hans Wiers-Jenssens – Anne Pedersdotter – written in 1908. It had been eleven years since Dreyer’s last feature, Vampyr (1932), which was poorly received in his own country and forced him to seek film opportunities elsewhere. Unfortunately, projects initiated in France, England and even Somalia, all fell through and Dreyer eventually returned to his former profession of journalism, until his interest in making a movie of Anne Pedersdotter spurred him to return to filmmaking.

From the beginning, Dreyer had very specific qualities he was looking for in his actors. In the key role of Anne, he cast Lisbeth Movin, a relatively unknown stage and screen actress at the time, because he “fell in love with her eyes.” Her remarkable portrayal, comparable in its intensity to Falconetti’s performance in his earlier The Passion of Joan of Arc (1928), is a complex one, mingling innocence with a suggestion of the sinister. Part of the credit is due to Dreyer who, according to Raymond Carney in Magill’s Survey of Cinema, used “moving key lights, scrims, barn doors, and even objects in the path of the key lights to throw an ever-changing pattern of shifting brightness and shadow on her eyes and face.” 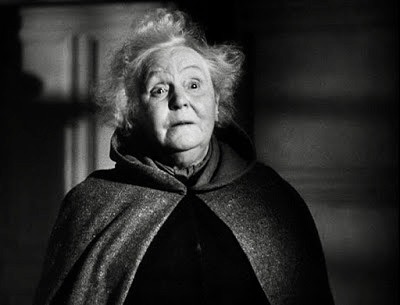 Marte (Anna Svierkier) pleads with her neighbor Anne to help her hide from witch hunters in Day of Wrath (1943).

Equally memorable is Anna Svierkier as Marte Herlof, the elderly peasant woman who is accused of witchcraft and burned at the stake in the film’s harrowing opening. Nearly eighty years old at the time, the actress was put through quite an arduous physical ordeal for her part by Dreyer whose perfectionism often bordered on the sadistic. For one scene, the director recalled in My Own Great Passion: The Life and Films of Carl Th. Dreyer by Jean Drum and Dale D. Drum, “…she was so seized with the part I couldn’t get her to move slowly. Then I remembered she had said she had bought a pair of tight new shoes. So I asked her to put them on and then ran a number of rehearsals. Her feet became more and more sore, and after some time she could only move slowly and the scene was quite successful. She said to me, ‘How could you do it?’ Afterwards, when she saw the scene, she thanked me.”

Another difficult shoot was Marte’s death scene when Svierkier was tied to a ladder and forced to wait until the sun emerged before the cameras could roll. A fellow crewmember said, “It was terrible for her, and she cried a little because her back ached terribly. When Dreyer saw this he exclaimed, ‘Oh that is just wonderful, wonderful. Keep that when we are going to shoot.”

Dreyer’s obsession with the smallest detail in his films is well documented, from the setting to the props. In one instance, he searched half a year for the right soap dish for a scene in Day of Wrath. In striving to capture the period look and appropriate atmosphere for the film, he shot exteriors at the Frilands Museum (aka The Open Air Museum), which is located on the outskirts of Copenhagen and features an open air village composed of 17th and 18th century Danish houses. All of the interiors for Day of Wrath were shot in the Palladium Studios in Hellerup. 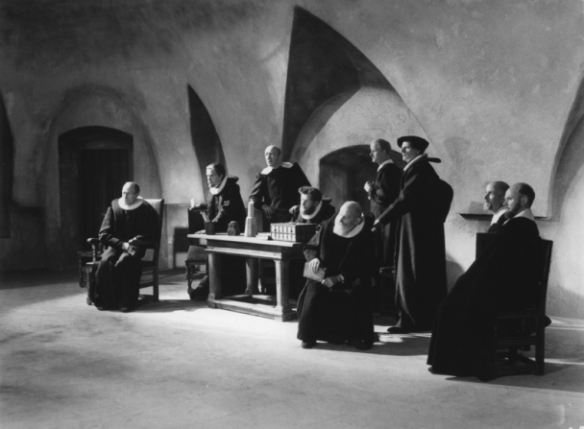 A committee of judges prepare to hear testimony against people accused of witchcraft in Day of Wrath (1943).

Despite Dreyer’s meticulous care in crafting Day of Wrath, the film received an even worse reception from the Danish critics than his previous film, Vampyr. Not only was it attacked for its stark, austere style but some critics accused the film of being a thinly disguised allegory of the Nazis’ persecution of the Jews. It was also released at the height of World War II in Europe when theatrical distribution for films was extremely limited at best. It also didn’t help matters that Dreyer was approached by the Germans with an offer to make movies for them. Instead, he fled the country with his wife, relocating to Sweden and not returning to Copenhagen until after the war. 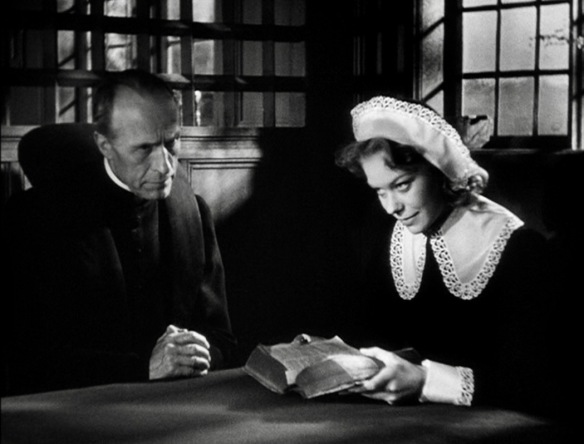 Reverend Pedersson (Thorkild Roose) and his wife Anne (Lisbeth Movin) in a quiet moment before the approaching storm in Day of Wrath (1943).

Today, Day of Wrath is seen as one of Dreyer’s undisputed masterworks and a powerful critique of religious intolerance, superstition and basic human nature. The film also possesses an intriguing ambiguity in which Marthe behaves at times as if she might indeed be guilty of certain accusations. Peter Cowie in Eighty Years of Cinema best summed up the film’s greatness when he wrote, “Like The Passion of Joan of Arc, Day of Wrath is a protest against the bigotry which spread like a shadow across the lives of ordinary people in the middle ages…Practically every composition has the clean, measured proportions of a Flemish painting. The white ruffs contrast sharply with the dark robes of the characters and some of the faces could have been chosen by Rembrandt. The scenes in the presbytery are claustrophobic. Every movement is furtive, and the soundtrack is so discreetly composed that when someone does cry out in terror or anguish, the sound strikes like a dagger. The ponderous narrative is faithful to a state of mind and a way of life at a certain point in history. In Day of Wrath slowness becomes a terrible inevitability.” 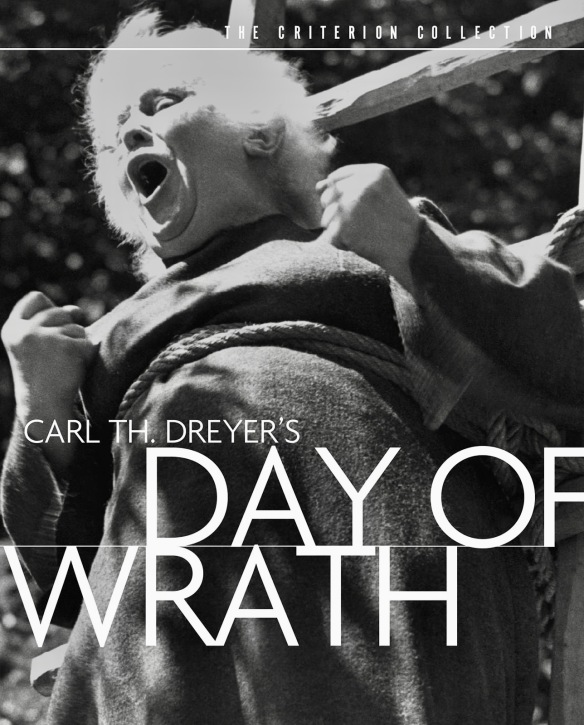 Day of Wrath was released on DVD by The Criterion Collection in August 2001 as part of their Carl Theodor Dreyer set which also included Ordet, Gertrud and the documentary on Dreyer, My Metier (Day of Wrath was not available as a single disc). The Criterion set has been out of print for years and would seem to be an inevitable choice for re-release on Blu-ray at some point in the distant future. The only other option to see Day of Wrath is the BFI box set, The Carl Theodor Dreyer Collection, which was released on Blu-Ray in April 2015 and includes Day of Wrath along with Master of the House, Ordet, Gertrud and several other short films and supplements. The BFI set is in the PAL format so you would need an all-region Blu-Ray player to view it and that is not something that is easily available to most U.S. movie lovers.

*This is an updated and expanded version of an article that first appeared on the Turner Classic Movies website.