Somewhere between William Castle’s rebirth in the late fifties as the genius movie marketeer of such gimmicks as Emergo (House on Haunted Hill), Percepto (The Tingler), Illusion-o (13 Ghosts) or death by fright insurance policies (Macabre) and his prolific stint as a B-unit director at Columbia Pictures and later at Universal-International is the missing link that connects the two. Although it probably qualifies as Castle’s most exploitive film in the true sense of the word, It’s a Small World (1950) is also the director’s most forgotten film. 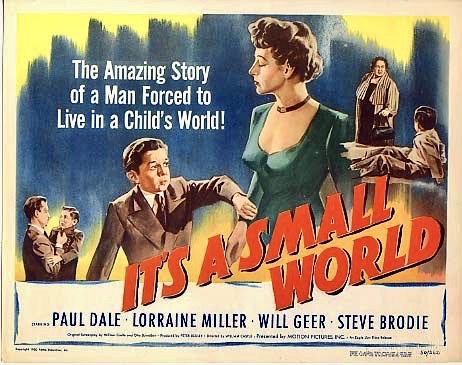 Directed by Castle, produced independently by him and distributed by Eagle-Lion Films, It’s a Small World is no forgotten masterpiece or even very compelling as cinema but it’s definitely a curiosity simply for the way in which it tries to balance a sympathetic case study of a midget with the lurid, sideshow aspects of its advertising campaign which proclaimed “The Amazing Story of a Man Forced to Live in a Child’s World!.” This was accompanied by suggestive illustrations which suggested a more perverse pulp fiction treatment.

Castle doesn’t even bother to mention the film in his entertaining autobiography, Step Right Up! I’m Gonna Scare the Pants Off America, but It’s a Small World marked the first time he ventured away from the formulaic B-movies he was making at the time (Johnny Stool Pidgeon, Undertow) in terms of subject matter. And it was certainly an unusual film for its time and an evolutionary step toward his later development of sure-fire audience hooks.

Like Tod Browning before him, who had seriously misjudged the response of MGM and the movie-going public to Freaks (1932), Castle had no better luck in attracting audiences to It’s a Small World. Since the film didn’t earn the notoriety or controversy of a movie like Freaks, it quickly vanished and was rarely revived except for an occasional appearance on late night television in later years.

It’s a Small World has the structure of a three-act play which is portentously emphasized in the illustrated chapter headings for each section – “The Boy”, “The Woman”, “The Circus.” Yet, despite the film’s sensationalistic poster, Castle touts his sincere intentions in an opening preface to the movie that appears over a bird’s eye view of a small rural town, which comes to symbolize ignorance and narrow-minded attitudes: “This is the story of a special group of people. It concerns the great difficulty they have in adjusting themselves to a normal world. It is hoped that by better understanding the lives of these people a greater and deeper knowledge of all humanity will come to us.”

Part one introduces us to our protagonist, Harry Musk (Paul Dale), a young boy who discovers at the age of 12 that his small size is due to a medical condition that affects “one in a million.” When it becomes obvious that Harry is not going to grow any taller, his affectionate but unenlightened father (Will Geer) decides to remove him from public school saying, “It’s the best thing son for you…People, they don’t understand. They’d only laugh at you. It’s best that nobody sees ya son.”

As Harry grows older but no bigger – the passage of time is depicted by Harry’s playmate Janie and his puppy dog growing to full size – his presence at home creates tension for his sister Susie. She finally snaps telling her father, “I can’t even invite my friends in….why can’t we send him someplace where he can be of some use like a circus or something?….I’m not going to let him ruin my life.” Anxious to get away from this stifling environment, Harry, now 21 years of age, leaves home to work for Mr. Jackson, a carnival promoter, but he escapes from this cruel taskmaster almost immediately and heads for Los Angeles. There he strikes up a friendship with Sam (Todd Karns, son of character actor Roscoe Karns), who hangs out in the park and shines shoes for a living. Soon, thanks to Sam, Harry has his own shoeshine operation and his future looks more promising.

Enter trouble in the form of femme fatale Buttons (Lorraine Miller), a brunette golddigger who lives across the hall from Harry in his boarding house. If the first third of the film plays like a dramatized special ed film, the second section of the film feels like a low-budget crime melodrama. Harry succumbs to Button’s seduction and she knows exactly how to play him: “You’re a gentleman, Harry. Anybody can see that and like I was saying, shining shoes is ok if you’re satisfied with nickels and dimes but you’re cut out for bigger things.” Harry is soon lured into aiding a gang of thieves led by Rose (Nina Koshetz) and Charlie (Steve Brodie), Button’s lover His initial training echoes the Fagan/Artful Dodger pickpocket lessons in Charles Dickens’ Oliver Twist. 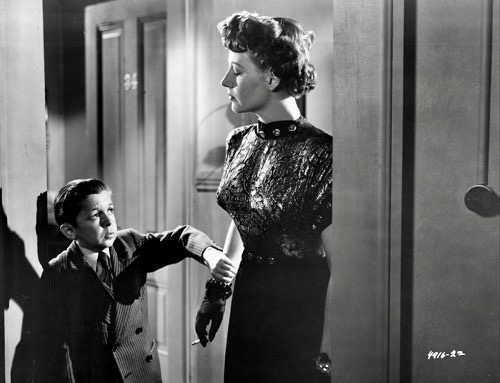 Dressed and posing as a child, Harry is then taken on excursions to ball parks, stores, any crowded public places where pickpockets can thrive. All of this is depicted in a montage sequence but we never actually see Harry committing any crimes, probably due to budgetary reasons. This chapter comes to a swift end when Buttons cruelly rejects Harry and the little guy comes to his senses; he turns himself and his gang into the police, avoiding jail time by agreeing to be placed in the custody of Mr. Winters, the owner of the Cole Bros. Circus, which is headquartered in Miami, Florida.

Act three of It’s a Small World finds Harry succumbing to the fate he had tried to avoid from the beginning but has now come full circle. Instead of feeling exploited for his size, he discovers acceptance, friendship and even love within his new extended circus family and the movie has a happy fadeout, but not before Harry delivers a stirring, heartfelt rendition of the song “It’s a Small World” (by two-time Oscar nominated composer Karl Hajos) to his diminutive fiancee Dolly (Anne Sholter). 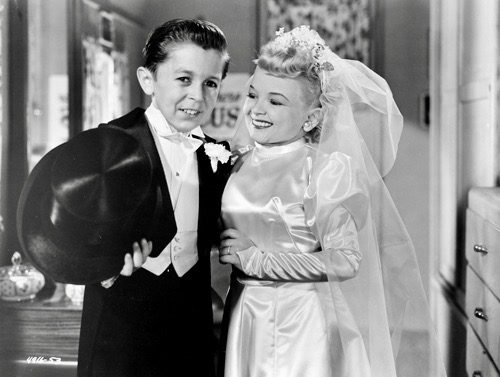 While Leonard Maltin’s succinct capsule review of the film accurately labels it a “truly strange B movie,” It’s a Small World is so flatly staged and directed and overly earnest in its sincerity that it never does come close to the exploitation tactics of such films as The Terror of Tiny Town (1938). Still, it has its share of odd moments, in particular a handful of surreal sequences in the first part of the film that look forward to Castle’s nightmarish interludes in The Tingler. In one, Harry is taunted by his shadow looming over his bed: “You better grow. I’m not gonna stay small.”

In another scene, as he makes his escape from Mr. Jackson and races through the countryside at night, he is haunted by floating images of the evil carny smoking double cigars. A later segment, when Harry is dumped by Buttons and goes on a drinking binge, achieves a dream-like film noir quality as he goes from bar to bar and ends up on a piano top, laughing hysterically before tossing a drink in the face of an obnoxious heckler. 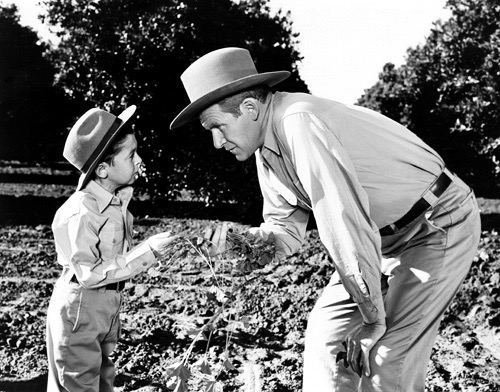 Considering the ultra-low budget of the film, it is surprising to see a few familiar faces in the cast such as Will Geer as Harry’s well-intentioned father and Steve Brodie (The Steel Helmet, Donovan’s Brain) as a small change hoodlum. Geer, who will be forever associated with the TV series The Waltons, appeared in a lot of independent and liberal themed films during his early career such as Pare Lorentz’s The Fight for Life (1940), which is set in a maternity clinic in a city slum, Intruder in the Dust (1949), based on William Faulkner’s novel, Salt of the Earth (1954), a socialist drama co-produced by the International Union of Mine, Mill & Smelter Workers, and Black Like Me (1964). 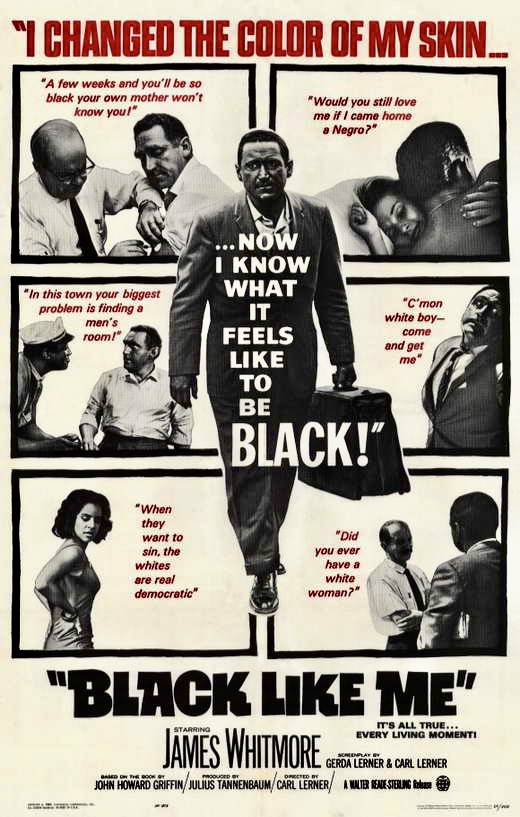 In the pivotal role of Harry, Paul Dale aka Dale Paulin, a disc jockey from Des Moines, does the best he can in his only starring role. He is no actor and was clearly cast because he is the real deal. His performance mostly consists of two different expressions, depending on the situation at hand. The one used most often is a forlorn, wounded look and the other is a sweet, innocent smile but regardless of the expression sadness radiates from this tiny actor. In that regard Dale effectively evokes compassion and empathy for his character. Probably the most troubling aspect of his casting though is that Castle choose to use him in the childhood sequences as well instead of casting a child actor. The result is both bizarre and distracting. 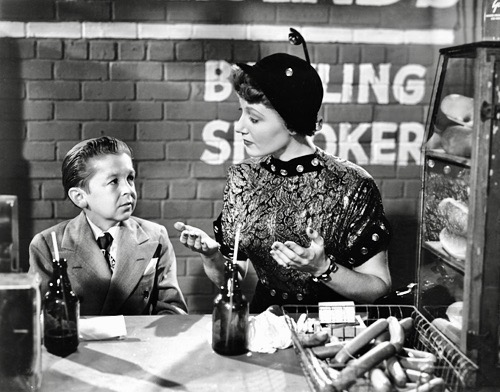 Very little appears to be known about Dale. Some sources claim he was one of Henry Kramer’s Hollywood Midgets and appeared as one of the three tough kids in “The Lollipop Guild” musical number in The Wizard of Oz. Anne Sholter, who makes her only screen appearance in It’s a Small World as Harry’s bride, was a member of Nate Eagle’s Hollywood Midgets and was often billed as “the miniature Lana Turner.”

In real life, Sholter was married to Frank “Cookie” Cucksey, a fellow member of Nate Eagle’s outfit, and they later moved to Sarasota, Florida where Frank worked for the Ringling Circus Museum as a tour guide. The buxom Miss Sholter is a lot more animated and expressive than her co-star and has a priceless response when she first sees Harry. “Yum Yum,” she says delightedly and we know the two of them will soon be an item. 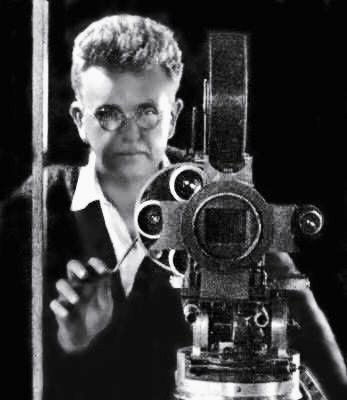 One interesting aspect of It’s a Small World is that it was filmed on location in Los Angeles and Miami, Florida by the great Karl Struss. While his usual virtuosity is hard to detect here – he won the Best Cinematography Oscar for Sunrise (1927) and was nominated three more times – there are some fascinating behind the scenes glimpses of the Cole Bros. Circus as the trainers and riders rehearse their dancing elephant and horse acts under the big top. Speaking of animal acts, the Cole Bros. Circus had been in the news for many years due to accusations of animal cruelty, especially their treatment of elephants. Knowing this makes that footage more upsetting to watch even though Cole Bros. Circus has been inactive since 2016. 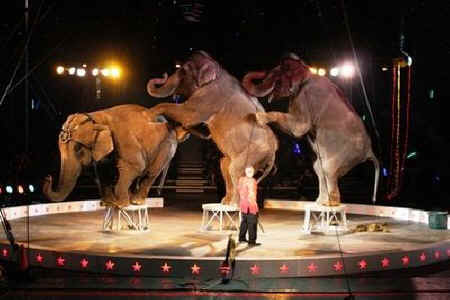 The elephant acts at the Cole Bros. Circus were considered a violation of the Animal Welfare Act and were discontinued.

It’s a Small World was released on DVD-R by the Warner Bros. Archive Collection in October 2010. It is a no-frills release sporting a clean, acceptable transfer and no extras of any kind. You can also view it on Amazon Prime for a minor fee. According to IMDB the director supposedly has a cameo in the film as a cop but either I blinked and missed that scene or it didn’t make the final cut.