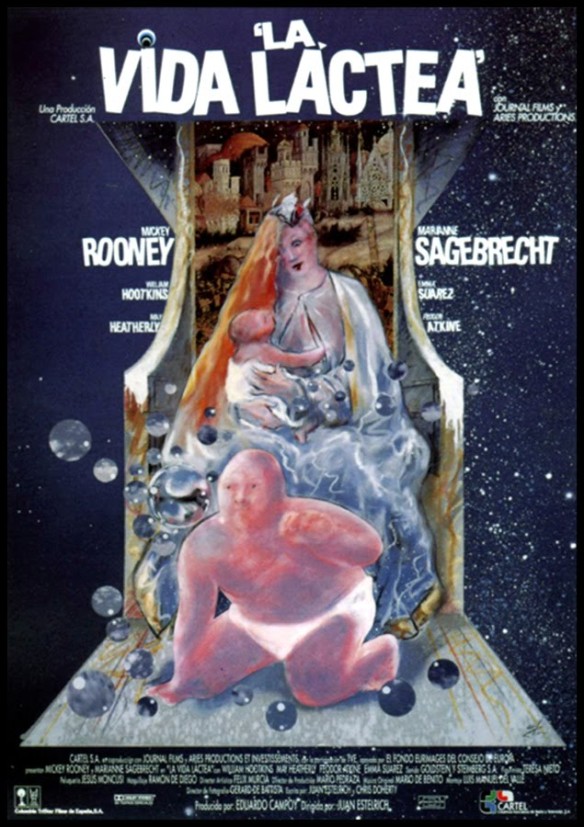 In the many peaks and valleys of his long career the Mickster never shied away from taking on difficult or questionable roles in his relentless desire to perform and entertain. While this adventuresome spirit might alienate part of his fan base that prefers to remember him as Andy Hardy or Judy Garland’s musical partner, it has won him an entirely new set of admirers. I’m talking about those who have seen and been amazed by his participation amid those lost post-MGM years in such eclectic fare as The Private Lives of Adam and Eve (1960), Platinum High School (1960), Everything’s Ducky (1961 with Buddy Hackett and a talking duck), Roger Corman’s The Secret Invasion (1964), How to Stuff a Wild Bikini (1965), the Mafia-Hippie-LSD comedy Skidoo (1968), and 1971’s The Manipulator (aka B.J. Lang Presents), where he plays a psychotic former director living in an abandoned warehouse with a female captive. 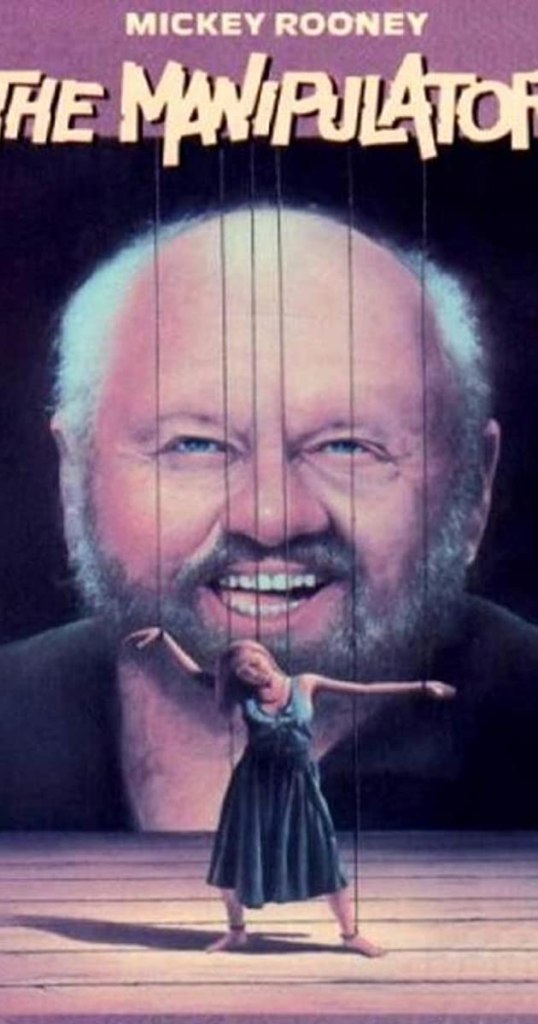 Rooney’s energy, range and versatility are truly awe-inspiring from his desperate loser of Quicksand (1950) to his subtle, moving portrayal in Requiem for a Heavyweight (1962) to his unexpected cameo in Babe: Pig in the City (1998). But I’m willing to bet that La Vida Lactea (aka The Milky Life), made in Spain in 1992, is probably the weirdest thing he’s ever done and very few people have seen it.

Helmed by Juan Estelrich, Jr., who has only directed two other films in a 33-year career where he has mainly worked as a second-unit director, this is a black comedy in the spirit of Luis Bunuel but without the sure touch of that master of the surreal. Yet, despite its uneven tone which wavers between broadly played social satire and a melancholy character study, The Milky Life is often fascinating in ways that probably weren’t intended. 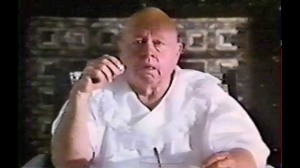 Mickey Rooney plays a billionaire who wants to return to an infant state in the black comedy, The Milky Life aka La Vida Lactea (1993), from Spanish director Juan Estelrich Jr.

Here’s the set-up: Barry Reilly (Rooney) is a billionaire who decides on his 80th birthday to retire but his announcement comes with an unexpected zinger that is a shock to his greedy family and in-laws. Reilly intends to spend his twilight years reliving that carefree, pre-consciousness state when he was a new born infant. He wants to regress to a state where he can be coddled, bathed, fed and loved – and he has the money to replicate the conditions and environment necessary for his indulgence. His vulture-like family has no choice but to humor him if they expect an inheritance and their devious schemes to sabotage the grand plan provide an intriguing subplot. 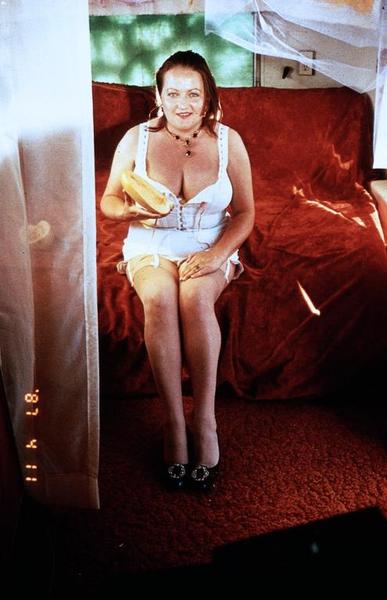 Marianne Sagebrecht stars in the romantic fantasy Zuckerbaby aka Sugarbaby (1985), directed by Percy Adlon. It was her breakout film role and launched her international career.

The main focus stays on Reilly who wastes no time in hiring Aloha (Marianne Sagebrecht), a wet nurse, and getting down on all fours, crawling around in an oversize diaper and communicating in baby talk gibberish (which is dubbed into Spanish by an actor whose hilariously incongruous voice adds another layer of bizarreness to Rooney’s performance).

The make or break moment – the one where you decide to either flee the room or continue watching in astonishment – is when Rooney begins breast-feeding on Marianne Sagebrecht’s more than ample bosom. Did she read the script and say, “I have to do this role”? Or was it the idea of working with the legendary Rooney regardless of the front and center suckling? Of course, this is just one aspect of their relationship which also involves the inevitable bathtub scene, playtime activities and the odd detail – Mickey rolling around in his giant crib or stuffing his overweight body into a high chair. It’s a brave performance – or maybe it’s an insane performance. And kudos to Ms. Sagebrecht too who is courageous beyond words. 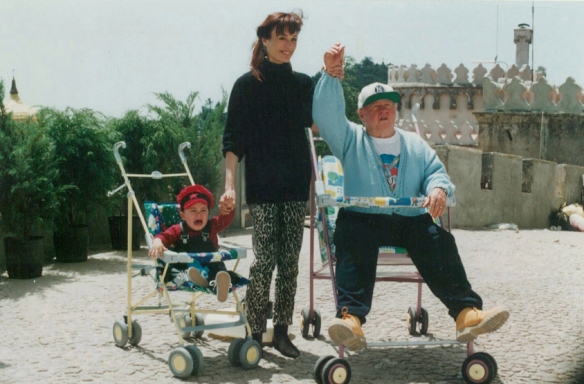 Billionaire Mickey Rooney regresses to an infant state and his greedy family play along in hopes of getting his fortune in La Vida Lactea (1993, aka The Milky Life).

The Milky Life takes a dark turn in the final third that in some ways is a purer form of Reilly’s desire to return to a state of infancy – in some ways you could say he finally gets his wish – but the final fadeout is still decidedly downbeat. The director might have been aiming for profound tragedy but the climax feels anticlimactic instead as if he never found the desired resolution to his story. Still, if you’ve looking for a Mickey Rooney film that will make his fans think they are hallucinating, this is it.

I’m actually surprised that The Milky Life was reviewed by any film critics in the U.S. Variety stated, “ This tasteless and painfully unfunny film, a Euro-pudding with no distinguishing features, will probably emerge as a cult item because of its very awfulness. Imagine Mickey Rooney with shaved head wearing nothing but diapers and talking baby talk. That’s the gimmick here, and it’s an unworthy one.” Sorry, but dismissals like this only make people want to see it all the more and the film is much more ambitious and fascinating than other Rooney projects from the early nineties like Sweet Justice, The Legend of Wolf Mountain and Silent Night, Deadly Night 5: The Toy Maker. 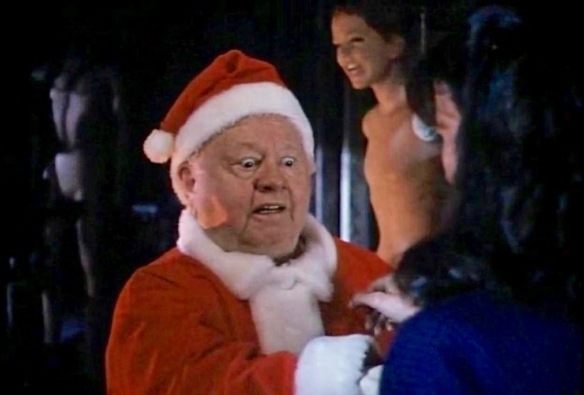 Unfortunately, the only way to see The Milky Life in the 1990s was via a VHS bootleg copy from Video Search of Miami in Spanish with English subtitles. The third-generation dub visual quality was less than desirable but once the weirdness began, you quickly forgot about that. But now, it appears to be an almost lost film. This is not the sort of thing you would ever see at the TCM Classic Movie Film Festival but Mickey Rooney completists who appreciate his unusual career arc will want to see it NOW. 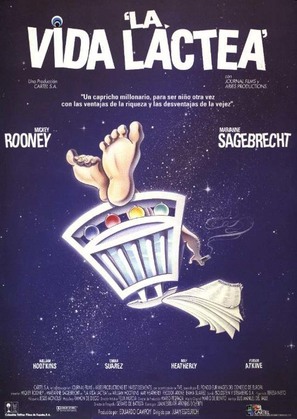