In the disaster film genre, Krakatoa, East of Java (1969) holds the distinction of being the only one presented in the Cinerama widescreen format but is also the most erroneously titled movie of all time. As many historians and movie critics have pointed out, Krakatoa is west of Java but veracity is not one of Hollywood’s strengths in producing historical epics. And Krakatoa, East of Java is not a factual recreation of the famous 1883 volcanic eruption in the Indian Ocean but a lavish B-movie adventure that uses the cataclysmic event only as the background and climactic resolution to its cavalcade of international stars and multiple subplots that play out as pure soap opera.

The storyline shares some similarities with the Fred MacMurray period adventure, Fair Wind to Java (1953), in which there are numerous character subplots and a climax featuring the eruption of the Krakatoa volcano.

A scene from Krakatoa, East of Java (1969), which was also released under the title Volcano.

Synopsis: Captain Chris Hanson (Maximilian Schell) has gathered together a select group of individuals for a deep sea diving mission with the objective of locating a sunken ship off the coast of Krakatoa that contains a fortune in pearls. Laura Travis (Diane Baker), the source of Hanson’s information, however, has little credibility among her fellow passengers. She is still recovering from a mental breakdown brought on by an abusive husband who abandoned her and hijacked their son Peter when she began an affair with Captain Hanson.

Joining them on the expedition are Douglas Rigby (former British pop singer John Leyton), an oceanographer with claustrophobia; The Flying Borgheses (Rossano Brazzi and Sal Mineo), a father-son balloonist team; Connerly (Brian Keith), a laudanum-addicted deep sea diver and his mistress Charley (Barbara Werle), a former saloon hostess; Toshi (Jacqueline Chan), an experienced pearl diver and her all-girl Japanese team; plus a human cargo of thirty chained prisoners that Capt. Hanson was ordered by the government to transport to a penal colony near Krakatoa.

Mix in a drug induced freak-out scene by Connerly, a musical striptease by Charley, a mutiny of the prisoners led by the villainous Dauzig (J. D. Cannon), a near-fatal balloon accident, and the constant special effects rumblings and eruptions of the Krakatoa volcano and you have a multimillion dollar movie serial that harkens back to the more innocent days of Captain America (1944) and Perils of Nyoka (1942). Film buffs will also notice fleeting appearances by movie villain Marc Lawrence (Key Largo), British character actor Niall MacGinnis (Curse of the Demon) and Trinidad-born dancer/actor Geoffrey Holder (Live and Let Die) in minor roles.

Drug addict Brian Keith has a crazy hallucination in this scene from Krakatoa, East of Java (1969), a Cinerama disaster epic.

For such an expensive, all-star cast production, you’d expect a big name director at the helm. Instead you get Bernard L. Kowalski, who was firmly established as a TV director at this point in his career (The Rebel, The Untouchables, Perry Mason, etc.) and would mostly remain in that field. Cult movie fans, however, know him for such low-budget delights as Hot Car Girl (1958), Night of the Blood Beast (1958) and my personal favorite, Attack of the Giant Leeches (1959). 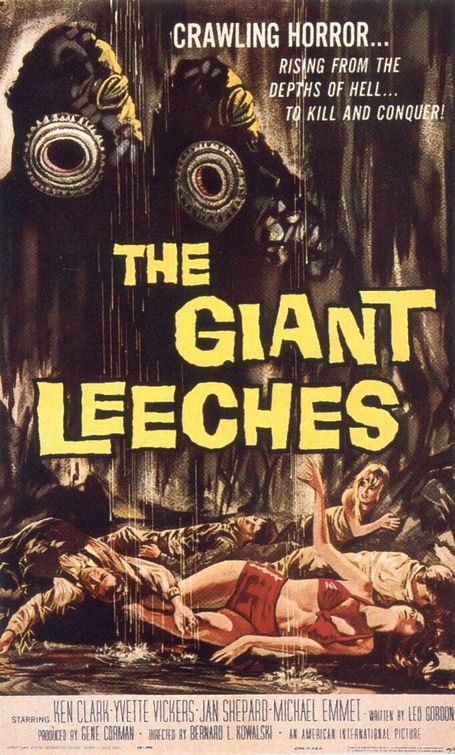 Clearly the producers of Krakatoa, East of Java were less interested in creating a literate epic on the order of David Lean’s Lawrence of Arabia (1962) than a slam-bang action entertainment on the level of How the West Was Won (also 1962), which was filmed and presented in the widescreen format known as Cinerama. Krakatoa, East of Java was also a Cinerama presentation though it was actually filmed in Todd-AO and Super Panavision 70. At the time of its release, however, interest in widescreen road-show presentations like Krakatoa was waning. In fact, the peak years for the Cinerama phenomena were between 1952 when This Is Cinerama became the highest grossing film of that year and 1963 when It’s a Mad, Mad, Mad, Mad World was the second ranked box office hit of the year.

By the time, Krakatoa, East of Java reached movie screens the Cinerama Releasing Corporation was experiencing financial difficulties and was functioning almost solely as a film distributor (For Love of Ivy and Hell in the Pacific [both 1968] were among some of their acquisitions). The company was liquidated in 1978 and its chain of movie houses was absorbed by Pacific Theaters.

Charley (Barbara Werle) is one of many passengers – and subplots – in the 1969 disaster epic, Krakatoa, East of Java.

Seen outside of its original Cinerama presentation on a movie theater screen, Krakatoa, East of Java must seem like a true oddity now. The film’s producers may have been aiming for a family-friendly adventure epic but, wanting to also attract adult audiences, they added some questionable material – the tortured Connerly-Charley relationship and Laura’s illicit backstory – that seriously detracts from the film’s pacing.

It was no secret that Krakatoa, East of Java was a troubled production. One of the original producers, Phil Yordan (El Cid, King of Kings, both 1961) dropped out of the project after the special effects were shot. After his departure a new associate producer was brought on board and a new screenplay was commissioned. The confusion of tone is constant and often provides unintentional amusement, particularly the inclusion of some inappropriate songs. In an opening sequence, island children are led by nuns in a sing-along – “Teacher, Teacher” – leading us to believe that this is a musical disaster film.

During the title credits, we hear the romantic strains of Krakatoa‘s theme song, “Java Girl” (music by De Vol, lyrics by Mack David) over images of filthy prisoners being led into the ship’s hold and sweaty deckhands raising the sails. But the real showstopper is Barbara Werle’s excruciating rendition of “I’m an Old Fashioned Girl” which she performs, stripping off her Victorian era clothes, as a prelude to sex with Brian Keith’s self-destructive loser. In fact, Werle’s character Charley is one of the more absurd characters on board with dialogue to match. “Don’t put labels on jelly jars,” she angrily tells Giovanni Borghese (Rossano Brazzi) when he insults her man. “I’ve seen the nice guys with the smiling faces and white collars pinch bottoms and I’ve seen the mean one pinch bottoms too. So don’t tell me about labels. I’ve seen the one they’ve put on Harry.”

Barbara Werle and Brian Keith are among the many passengers on a ship bound for Krakatoa, East of Java (1969), a disaster epic by Bernard L. Kowalski.

Krakatoa, East of Java was not a financial success and most critics trashed it when it opened. The San Francisco Chronicle stated that “those who made it have absolutely no skill in story-telling” and the New York Daily News noted that “by the time they have dunked you in a raging volcano; deafened you with underwater explosions; scorched you with volcanic fireworks, and, finally drowned you in a tidal wave, you will be too numb to notice how really unexciting and uninvolving it all is.”

A lighthouse is engulfed by a tidal wave in this scene from the Cinerama disaster epic, Krakatoa, East of Java (1969).

Nevertheless, the film found a few advocates to champion its merits. Kevin Thomas of the Los Angeles Times called it “one of the best movies ever made in Cinerama” and even wrote, “Rich in the atmosphere of exotic faraway places, it is so buoyant and bracing you can almost smell the sea air.” Even Gary Arnold of The Washington Post found it refreshing: “In a week dominated by terminal cases of wretched big screen photography – Mackenna’s Gold with its livid process shots in Super Panavision and Sweet Charity with its TV color and Brobdignaggian close-ups in 70 mm Panavision – Krakatoa, East of Java seemed rather pleasant.”

Diane Baker and British pop singer John Leyton are featured in this German lobbycard from Krakatoa, East of Java (1969).

The film received another popular endorsement when it was honored with an Academy Award nomination for Best Special Effects by Eugene Lourie and Alex Weldon (it lost to Marooned). Admittedly, the visual effects are fun though hokey and the rear-screen projection, matte paintings, process shots and stuntwork look quaint by today’s CGI standards. Although the film has some dull longuers, disaster film addicts should enjoy it for its campy dialogue and rampant absurdity which is almost as enjoyably bad as The Poseidon Adventure (1972).

A scene from the opening screen credits for Krakatoa, East of Java (1969).

A still from the Oscar-nominated disaster epic Krakatoa, East of Java (1969), which was re-released under the title Volcano.

Discrepancies continue today over the original running time of the film which the American Film Institute website (afi.org) lists as being released in versions of 143 minutes, 132 minutes and 127 minutes (minus the opening overture, intermission and exit music) though some re-edited versions have resurfaced on television and in 35mm and 16mm prints with a running time of 101 minutes.

Krakatoa, East of Java has been available on DVD from various distributors over the years such as a 2005 release from MGM but the way to go is the KL Studio Classics Blu-Ray released by Kino Lorber in 2017 which is a handsome presentation of the film which clocks in at 131 minutes. The only extra is some trailers for other disaster films like Meteor (1979), which is a real slog compared to Krakatoa.