If you went by title alone, Alain Jessua’s Jeu de Massacre (released as The Killing Game in the U.S. and as Comic Book Hero in other territories) suggests it might be a murder mystery or a James Bond-like spy thriller which was still in vogue at the time of the film’s release in 1967. Instead, the film is a witty black comedy about the addictive power of pulp fiction – in this case, a superhero comic book – to ignite dangerous fantasies in readers whose grasp on reality is fragile.

One of the many cartoon panels designed by Guy Peellaert and his team which are featured in Alain Jessua’s pop art black comedy, The Killing Game (1967).

The Killing Game opens with a barrage of comic strip images in bold colors backed by an aggressive pop tune from The Alan Bown Set (one of the late comers in the British Invasion wave) before it abruptly segues to Pierre Meyrand, the film’s narrator and protagonist, who is seated by a lake with three other people.

Pierre (Jean-Pierre Cassel) confesses, “I dreamt of power, luxury, money and all the pleasures of the earth, all within reach without knowing it. Yet I held the ultimate weapon – the secret. But the occasion never occurred until Bob appeared.”

The secret, of course, is the MacGuffin that drives the narrative but it is only an excuse to examine the dynamics that develop between four people – Pierre and his wife Jacqueline (Claudine Auger), collaborators on a series of popular comic strips, and Bob Neuman (Michel Duchaussoy), a wealthy Swiss playboy, and his possessive mother Genevieve (Eleonare Hirt). 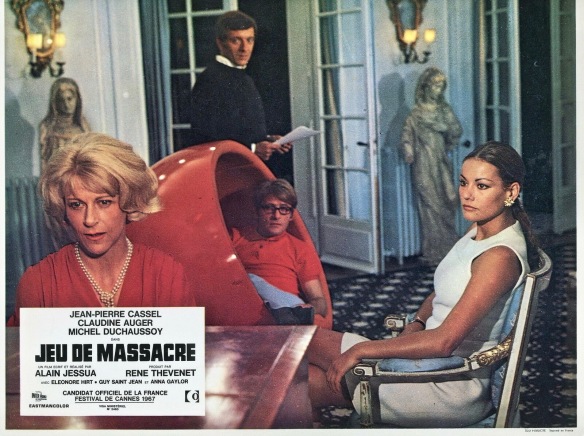 The four main characters of Alain Jessua’s The Killing Game (1967) have their own secret agendas and schemes.

Told in flashback, The Killing Game quickly establishes Pierre and Jacqueline as a Parisian couple who are living beyond their means. He was once a highly successful writer of comic strips which were brilliantly illustrated by his wife with often fantastic scenes of sex and violence. Now they are deep in debt with no publishing offers on the horizon until fate intervenes with the unexpected arrival of Bob, an effusive fan who loves the couple’s work.

A scene from The Killing Game (1967): Jacqueline (Claudine Auger), the wife of a cartoonist, toys with Bob (Michel Duchaussoy), a wealthy but delusional playboy…or is she the prey?

Bob reveals that many of the fantastical adventures depicted in their comic strips are similar to his own life and goes into detail about his experiences in the Foreign Legion, travels in Indochina and near-death encounters fighting the Viet Cong. Is Bob telling the truth or delusional?

The couple at first dismiss Bob as a bore and a fool until he and his mother offer them an extended vacation – and possibly permanent residence at their Swiss estate situated on a lake in idyllic surroundings with servants at their beck and call. It certainly solves their current financial crisis but it also results in the solution to Pierre’s writer’s block. Bob’s overactive imagination and anti-social behavior – he almost gets arrested by the local cops when he terrorizes swimmers and fisherman with his speedboat – inspires Pierre to create a new comic book daredevil, inspired by Bob, called “The Killer of Neuchatel” (named after the medieval Swiss town where the Neuman family live).

Bob (Michel Duchaussoy) becomes the model for the daredevil adventurer “The Killer of Neuchatel” in The Killing Game (1967).

Good fortune and success shine on Pierre and Jacqueline but it comes with a price as Bob begins acting out in real life the fictional exploits of his comic book alter ego. Without revealing too many details, The Killing Game culminates in a surreal, No Exit resolution in which everyone gets what they deserve – and probably actually desire.

Other directors might have presented this tale as a psychological drama or a straightforward melodrama but Jessua, who also wrote the screenplay, chooses a tone which is light, playful and quirky. The Killing Game is also tightly paced, unpredictable and consistently propelled along by Jacques Loussier’s irresistible music score (a melange of jazz, rock big band, spy movie themes and other influences) and dazzling, pop art comic book panels created by Guy Peellaert and his team.

Peellaert was a Belgium artist who first gained fame as the creator of the popular 1966 French comic strip, Les Aventures de Jodelle, and later collaborated with British rock journalist Nik Cohn on the best-selling graphic book Rock Dreams. After that, Peellaert became the go-to artist for musicians like David Bowie (Diamond Dogs) and The Rolling Stones (It’s Only Rock ’n Roll) as well as film poster designer for directors Martin Scorsese (Taxi Driver), Wim Wenders (Wings of Desire) and others. 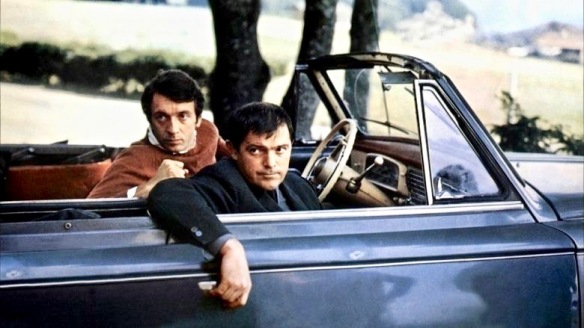 Pierre (Jean-Pierre Cassel, left) and Ado (Guy Saint-Jean) pursue the unpredictable Bob, who might be capable of murder and worse in The Killing Game (1967).

Another major virtue of The Killing Game is the superb ensemble cast which is headed by Jean-Pierre Cassel, who is both the narrator and main character. Cassel rose to fame in the early sixties playing happy-go-lucky rogues and seductive playboys in the romantic comedies of Phillipe De Broca (The Love Game, The Five Day Lover, Male Companion) but American audiences probably know him best for his roles in big budget, all-star productions like Sidney Lumet’s Murder on the Orient Express (1974) and Richard Lester’s The Three Musketeers (1974) and its sequel, The Four Musketeers: Milady’s Revenge (1974). 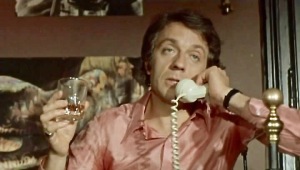 Cassel is particularly effective in dramatic roles when he shows a sinister side to his matinee idol persona as in Claude Chabrol’s La Rupture (aka The Breach, 1970) where he plays a sleazy opportunist hired to ruin a woman’s reputation in a bitter child custody case. The Killing Game gives him an even more complex character to play, one where his smug bon vivant is pulled out of his comfort zone by his own misreading of a supposed sycophant.

Claudine Auger, whose most famous role remains Bond girl Domino in Thunderball (1965), was usually cast in mostly decorative roles in her early career but she displays an impressive range in The Killing Game as she goes from being Pierre’s willing accomplice to addressing her own independence and emotional needs with Bob. A key turning point in her problematic marriage occurs when Pierre pompously instructs her in the fine art of lighting and smoking a cigar. “It’s like the beginning of wisdom,” he explains. “Or senility!”, she snaps contemptuously.

Jacqueline (Claudine Augar) sleeps as her husband Pierre (offscreen) studies her body in The Killing Game (1967).

Auger would go on to appear in numerous genre films from romantic comedies (Anyone Can Play, Lovers and Liars) to crime thrillers (Summertime Killer, Flic Story) to action dramas (Adriatic Sea of Fire, Bloody Sun) but she achieved cult status for her appearance in two giallos – The Black Belly of the Tarantula (1971) and Mario Bava’s A Bay of Blood (1971). The latter is particularly memorable for her mean-spirited performance as a greedy, murderous schemer in a plot to inherit an heiress’s estate. 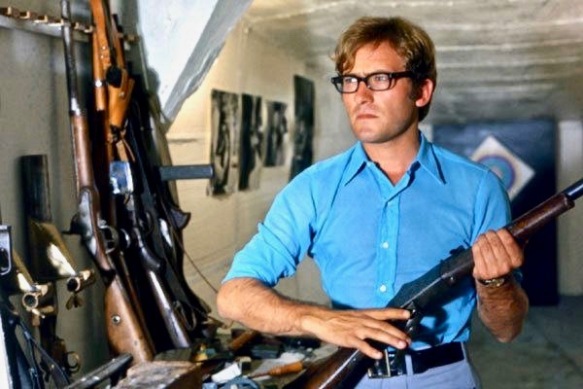 Bob (Michel Duchaussoy) begins to take on characteristics of his comic strip alter ego in The Killing Game (1967), directed by Alain Jessua.

Of course, it is hard to imagine The Killing Game working as well as it does without Michel Duchaussoy in the role of Bob. This was his first major starring role and he is both comical and chilling as a spoiled, childlike mama’s boy who succumbs to delusions of grandeur when given free reign. Like Cassel, Duchaussoy has had a long, prolific career (over 180 films and TV series) that has included such high points as his work for Claude Chabrol (This Man Must Die, Just Before Nightfall, The Nada Gang), Louis Malle (May Fools) and major supporting roles like portraying the father of French gangster Jacques Mesrine (played by Vincent Cassel, son of Jean-Pierre) in the two part biopic by Jean-Francois Richet – Mesrine Part 1: Killer Instinct and Mesrine Part 2: Public Enemy #1 (both 2008). 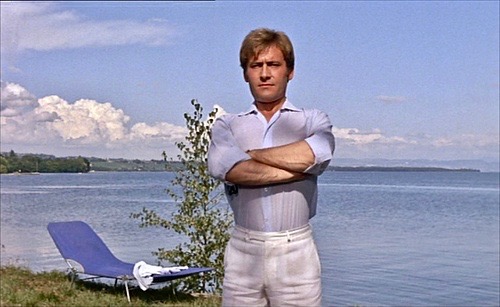 The Killing Game was Jessua’s second feature film after his promising debut Life Upside Down (1964) and it was an even bigger success in France, winning Best Screenplay at the Cannes Film Festival (it tied with Elio Petri’s We Still Kill the Old Way) as well as being nominated for the Palme d’Or. It was also well received in Europe and the U.S. where most critics praised the film’s frenetic style and droll humor. 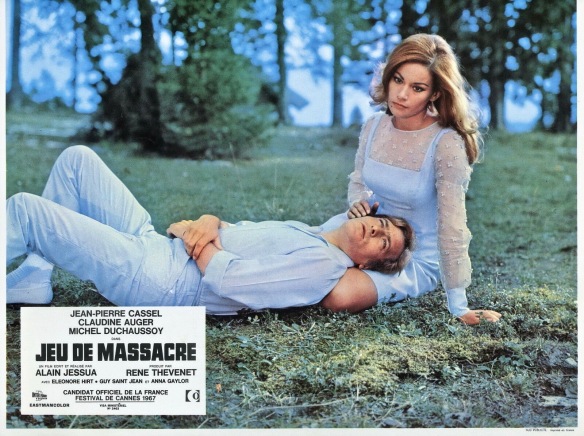 Jacqueline (Claudine Augar) is beginning to respond to Bob’s infatuation with her despite being married in The Killing Game (1967), co-starring Michel Duchaussoy (pictured).

So what happened to it? The film is virtually forgotten today but a revival of it couldn’t be more timely with the rise in popularity of movies based on Marvel and DC Comics. Unfortunately, Jessua didn’t make another film for almost six years. His next project after The Killing Game, a sci-fi epic entitled Le Planet Bleu, never materialized but he eventually bounced back with Treatment du Choc (aka Shock Treatment) in 1973. It was about a chic health spa for the wealthy which specialized in rejuvenation treatments. But there was something sinister behind the operation that was connected to the disappearance of numerous Portuguese immigrants. Even though the film featured a cast headed by Alain Delon and Annie Girardot, it barely got released in the U.S. and his subsequent films (Armaguedon, The Dogs, Frankenstein 90, etc.) found no distribution outlet here. 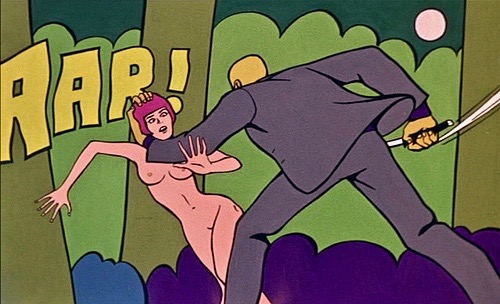 One of the cartoon panels created for the cartoon strip “The Killer of Neuchatel” in Alain Jessua’s dark satire, The Killing Game (1967).

The Killing Game is currently not available in the U.S. as a DVD or Blu-ray although Studio Canal released it on DVD in France in 2004. That version offers a French language only option and you would need an all-region DVD player to view it. Now that Kino Lorber is releasing more French cinema from the 60s and 70s on Blu-Ray such as Claude Chabrol’s The Third Lover and Rene Clement’s Rider on the Rain, perhaps there is some hope for the future re-mastering and re-release of The Killing Game on DVD/Blu-ray.