What other living actor has the sort of cult following that Ron Perlman does? Ever since his film debut in Jean-Jacques Annaud’s prehistoric epic Quest for Fire (1981), Perlman’s unique screen presence has been a key component in more than 200 films and TV shows. Sure, some of them are dreck or forgettable but then there are The Name of the Rose (1986), where he played the hunchback Salvatore, the critically acclaimed TV series Beauty and the Beast (1987-1990), Marc Caro & Jean-Pierre Jeunet’s The City of Lost Children (1995) and several films by Guillermo Del Toro including the lead in Hellboy (2004) and Hellboy II: The Golden Army (2008). In a change of pace from these often grotesque and larger-than-life anti-heroes, Perlman tries something different in Asher, which opens in theaters around the country on December 7th.

With Asher, which was co-produced by Perlman, the actor inhabits the role of an aging hit man who is starting to lose his touch. Unlike the detached, sociopathic loners who usually fit the stereotype of hit men in the movies like Vince Edwards in Murder by Contract or Edward Fox in The Day of the Jackal, Asher is not an elusive shadow but a familiar sight in a predominantly Jewish borough of New York. In fact, he picks up his contract work from the corner dry cleaner Abram (Ned Eisenberg), who works for a local crime boss (Richard Dreyfuss).

Asher is also a snappy dresser and approaches the task of polishing his shoes like sort some of religious ritual. He is also an excellent cook, a connoisseur of fine wines and lives in a minimalistic but tastefully furnished apartment. Yet something appears to be missing in his life and that changes when he meets ballet instructor Sophie (Famke Janssen) during an aborted attempt to score his latest kill. He has a blackout at her apartment doorway, she revives him and then he goes his own way but he is obviously smitten. It’s not your usual “meet cute” scenario and soon Asher is pursuing Sophie, which creates complications for him, her and his organization. 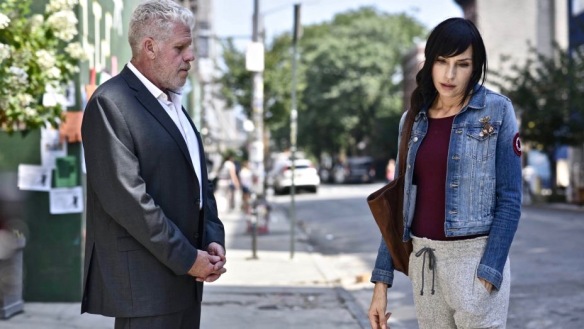 Ron Perlman and Famke Janssen play unlikely but appealing lovers in Asher (2018), a drama about a hit man who is feeling the need to retire.

Perlman is a far cry from a conventional leading man. Even Charles Bronson and Lee Van Cleef look like handsome matinee idols in comparison. Perlman has even admitted in interviews that his face has often been exploited for exaggerated effect: “I’ve always felt there were aspects of me that were monstrous, and you can either hide from it or confront it, embrace it and understand that those are aspects that make you unique and define you and motivate you.” 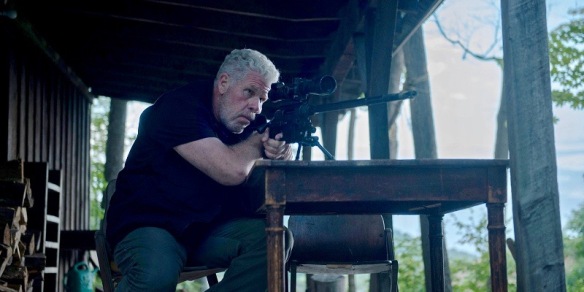 The novel twist that Perlman brings to Asher is investing his professional killer with elegance, charm and his own moral code, which looks honorable compared to his murderous peers. The character is intriguing enough to warrant a TV or web series but this feature film, directed by Michael Caton-Jones (Rob Roy, Basic Instinct 2), tries to cram too many genre elements and plot into its running time and becomes almost schizophrenic in tone. Is it a contemporary noir or a romantic drama about two lonely people finding each other or a black comedy or a revenge thriller? It tries to be all of these things and is also saddled with a topical subplot involving Sophie’s mom who is suffering from Alzheimer’s (Jacqueline Bisset in a thankless role).

Despite the mixture of styles, the film has a surprisingly formulaic predictability for most of its length; you know, for example, that Asher’s reluctant decision to work with a team of assassins is going to end badly. But there are also quirky and original touches such as Asher intentionally setting off the smoke detectors in an apartment house and activating the sprinkler system. When his intended victim emerges from his room to see what is going on, he is confronted by a man with a gun under an umbrella in a rainy hallway. 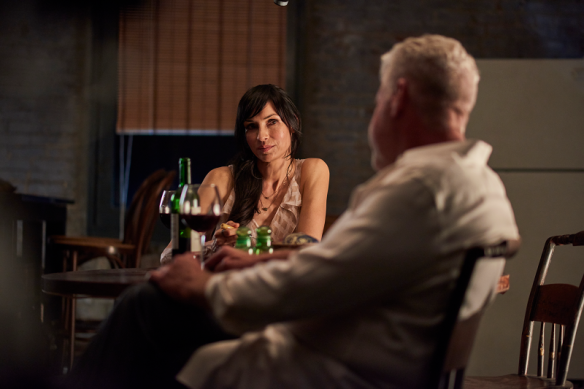 Ballet teacher Famke Janssen has no idea that her dinner date is a hit man (Ron Perlman) in Asher (2018).

And sometimes the preposterous plot twists and uneven tonal changes result in an amusing form of deadpan comedy. A perfect example of this is Asher’s dinner date with Sophie at a posh restaurant. When he goes to the bathroom, he is followed and attacked by an assassin whom he beats and stabs to death in a toilet stall. When he returns to the table, Sophie asks what took so long and he tells her the truth, adding that they need to leave the restaurant immediately and return home. She assumes he’s joking and responds, “So it’s true. Men will say anything for sex.”

Peter Facinelli plays an aspiring crime boss with an agenda in Asher (2018), starring Ron Perlman in the title role.

It must be said that Perlman and Janssen have great on-screen chemistry and you wish the film had spent more time on their slowly evolving relationship without the ailing mother subplot. It’s also fun to see Richard Dreyfuss in a colorful but brief role and familiar faces like Peter Facinelli, the breast-grabbing, Tourette’s affected doctor from the TV series Nurse Jackie, as an ambitious young mobster on the rise. The bluesy, slide guitar enhanced score by Simon Boswell reminded me of Ry Cooder’s music for Paris, Texas (that’s a good thing!) and Denis Crossan’s atmospheric cinematography is appropriately chilly or warm with its color palette depending on the film’s mercurial mood.

While Asher may not be destined for the hit man movie hall of fame next to classics like John Huston’s Prizzi’s Honor (1985) or Jean-Pierre Melville’s Le Samourai (1967), it deserves credit for attempting a variation on a theme. And fans of Ron Perlman will want to check it out anyway because it offers a rare opportunity to see the actor as a romantic leading man.