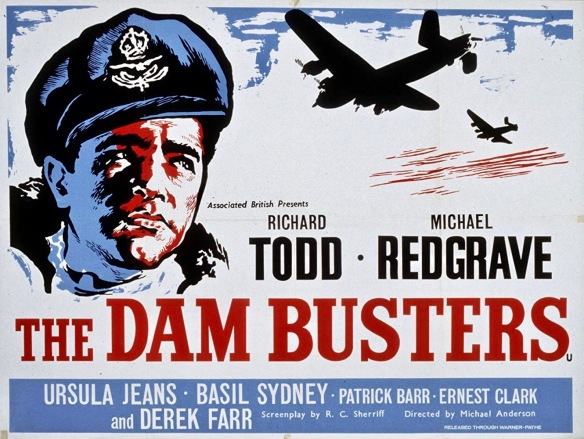 The biggest box office hit of 1955 in England and honored with three BAFTA nominations for Best British Film, Best British Screenplay and Best Film from any Source, The Dam Busters (1955) is less well known in the U.S. but is nonetheless one of the most realistic and faithful accounts of an incident in WWII that is credited with hastening Germany’s defeat in the war.

One of the German dams destroyed by an RAF squadron in WW2 during “Operation Chastise.”

On May 16, 1943, the newly formed 617 Squadron under the command of Guy Gibson launched “Operation Chastise,” a covert operation that attacked the Ruhr dams in Germany under the light of a full moon. The resulting damage was extensive and a major blow to the German war machine forcing that nation to dedicate more resources to the defense of key installations while trying to rebuild the Ruhr dams at the same time. The toll on the British side was considerable as well; of the 133 flyers who departed from the Scampton, England airbase that fateful night, only 73 returned. Yet, it was the bravery of the men and their heroic mission that triumphed in a British victory that strengthened the country’s morale during a dark period.

Unlike most of the war movies of its era, The Dam Busters was atypical in its presentation of the events. Taking a much more documentary-like approach, the film is divided into two sections. The first concentrates on the development and laborious testing of the “bouncing bomb” (created by British engineer Barnes Wallis) that skipped across water, avoiding torpedo nets and creating earthquake-like damage upon detonation with dams; the second section details the carefully orchestrated preparations for the mission and its execution. 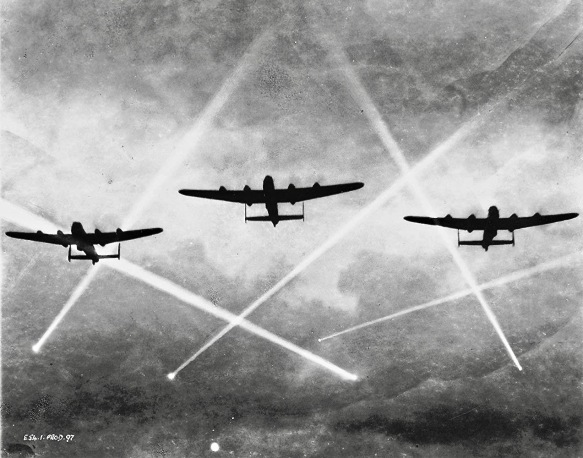 Shot in black and white by cinematographer Erwin Hillier in order to more fully integrate stock footage and give it the immediacy of a newsreel, The Dam Busters also avoided any fabricated romantic subplots for box office insurance, choosing instead to focus solely on the facts and the participants involved, all of whom were played by a first rate British cast. 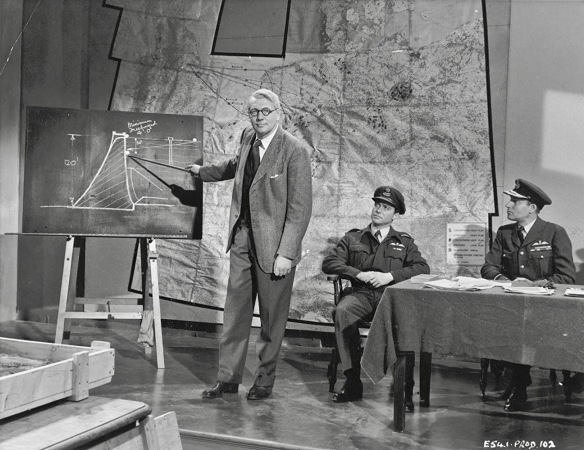 Michael Redgrave, who plays Dr. Wallis in the film, relished his part because it allowed him “to create a character totally different from my own.” In his autobiography, In My Mind’s Eye, he wrote, “It was Barnes Wallis himself, incidentally, who gave me the clue to my performance in The Dam Busters, a film which I enjoyed making more than any since The Browning Version (1951). We were introduced, and Wallis, who was a good deal shorter than I and rather slim, burst out laughing. We ‘clicked’ at once. At our second meeting I said, “I’m not going to mimic you, you know.’ His reply was interesting, not so much because he was evidently relieved as for what it showed of the method he would use to tackle a problem, even in the field of acting. ‘No, of course. Your problem is not to imitate a person, but to create him.’ It illustrated, I thought, his scientific approach to the very essence of what he was considering. A quality – not at all to be confused with the stereotype of the absent-minded professor – of setting aside everything but the essential, which must have driven him on and sustained him through countless set-backs and disappointments.”

Richard Todd, who was cast in the role of Wing Commander Guy Gibson, was a rising star in both British and American films of the fifties, having already received a Best Actor Oscar nomination for his performance in The Hasty Heart [1949]. At first he had some concerns about the choice of director for The Dam Busters. Michael Anderson had spent most of his career as a second unit director and had only helmed a few low-budget programmers when he was tapped by executive producer Robert Clark to direct his first major film. The Dam Busters turned out to be an important calling card for Anderson and led to his selection by Michael Todd to direct the even more lavish and ambitious epic, Around the World in 80 Days [1956]. 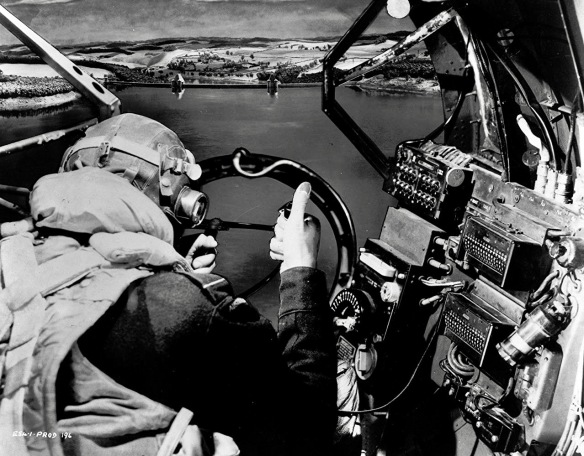 An RAF squadron pilot zeros in on his target in the British aviation war drama, The Dam Busters (1955).

In preparation for The Dam Busters, Todd recalled in his memoirs In Camera, “Together Michael and I saw footage of the special effects photography that had already been shot and which was crucial to the making of the film. Without believable shots of the actual demolition of the dams there could be no picture, and I was amazed how realistically the special effects boys had contrived the explosions, the collapse of the two enormous stone dams and the release of vast torrents of water…And together we also met and talked with many of those who had been connected with the famous raid, including the pilot Guy Gibson’s widow, Eve, and his frail old father; Mickey Martin….and above all Dr. Barnes Wallis, inventor of the ‘bouncing’ bomb. Sherriff [the screenwriter], too, had met them and there was not a line of dialogue or a single incident enacted on the screen which was not true to the events.”

A behind the scenes production still of a special effects technician inspecting a miniature dam for the WW2 epic, The Dam Busters (1955).

The special effects work, the scripting and the preparation of the aircraft scenes alone took almost two years before production began on The Dam Busters. A large part of the budget was also consumed by the RAF [the Royal Air Force of the United Kingdom] which supplied bombers and pilots to the studio, Associated British, at a cost of 130 pounds per hour per plane. According to one source, “The 150 hours of flying time accounted for roughly 10% of the budget.” Most of the movie was shot in the Peak District, in the north of England, and at the RAF Hemswell in Lincolnshire.

A production still taken during the making of The Dam Busters (1955), directed by Michael Anderson.

“The actual shots of the Wellington bomber dropping its huge dambusters,” noted Todd in his autobiography, “were cleverly contrived by Michael Anderson from some rather poor-quality archive film shot in 1943 during the original tests. He framed it in such a way as to make it appear that it was seen by us through our binoculars, which explained the difference in quality of the 1943 material.”

As for Todd’s own scenes during the flying sequences, he recalled, “My first few days in the studios were spent strapped into the pilot’s seat in a Lancaster fuselage…The greatest difficulty for me and for other crew members who had to be photographed in the aircraft was lack of space. The Lancaster fuselage was cramped and bristling with instrumentation at any time, but with the addition of the camera, lights, cables, microphones, camera and sound crews there was scarcely room to breathe. And it was dreadfully hot, too, as we sweated in our helmets and Mae West jackets. It was I, perforce, who spent most of the time in these conditions. Once I was in my seat, there was no means of getting out again until all the equipment had been removed, so for days on end I was strapped in by about 8:15 am, released for lunch and re-incarcerated from about 2 pm until the end of shooting at 6 pm. The needs of nature occasionally caused total chaos and a lengthy hold-up.”

It was all worth the extra effort and uncomfortable conditions because The Dam Busters was not only a huge financial success but was praised by the critics. “Excuse me while I rave about the finest flying picture I’ve seen,” wrote Reg Whitley in the Daily Mirror and Dilys Powell, in the Sunday Times, said “Mr. Anderson has handled the final scenes in particular with sympathy, and understatement is never allowed to become the cliché it often is in British films of this kind.” In the U.S., the film was well received also with the Variety review typical of its reception: “…told with painstaking attention to detail…The production is a personal triumph for Michael Anderson. Michael Redgrave, particularly, gives a vividly human portrayal of Dr. Barnes Wallis the scientist while Richard Todd makes a distinguished showing as Guy Gibson the RAF commander.” In addition, The Dam Busters was nominated for an Oscar® for Best Special Effects.

Robert Shaw (left) and Richard Todd star in the British WW2 drama The Dam Busters (1955), based on a real-life secret mission.

When watching The Dam Busters keep your eyes peeled for brief appearances by Robert Shaw as Flight Sergeant Pulford, George Baker (On Her Majesty’s Secret Service [1969], The Spy Who Loved Me [1977]) as Flight Lt. Maltby, John Fraser (Tunes of Glory [1960], Repulsion [1965]) as Flight Lt. Hopgood, and Patrick McGoohan as a guard. In Roger Langley’s biography Patrick McGoohan: Danger Man or Prisoner?, the actor admitted, “The first time I found myself on a film set was for The Dam Busters. I had exactly one day’s filming and perhaps five lines.”

Richard Todd (left) and Michael Redgrave star in The Dam Busters (1955), a British war drama based on a real-life secret mission.

When The Dam Busters was released in the U.S., “Warners employed an editing short cut,” according to Peter Van Gelder in That’s Hollywood, “that raised questions in the House of Commons. In two years of preparation for filming the makers aspired to absolute accuracy about the raids, even going so far as to send a copy of the completed script to every surviving member of the Squadron for vetting. But in trimming the action down for the American market the Warners editors spliced in an extra shot of a plane crashing. The only example they could find was a USAF Flying Fortress. This was immediately seized upon by pedantic, mid-fifties Can You Spot-ters and the two offending seconds were promptly excised.” 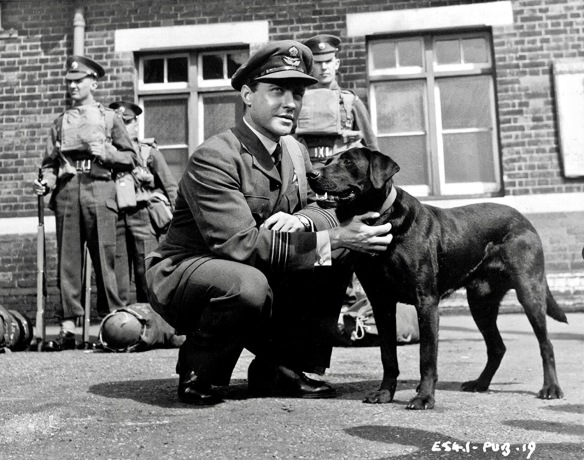 Wing Commander Guy Gibson (Richard Todd) and his beloved dog with the offensive name in The Dam Busters (1955).

There was one more minor detail about The Dam Busters that gave Warners pause and it was Guy Gibson’s devoted dog who was beloved by the entire 617 squadron and was named Nigger. In some markets the hound’s name was dubbed as Trigger for obvious reasons.

Director Peter Jackson (far right) is an aviation military buff who wanted to remake The Dam Busters for years.

Director Peter Jackson (The Lord of the Rings trilogy), an avid military aviation buff, toyed with producing his own remake of the classic 1955 war epic over a ten year period but finally gave up after failing to raise the necessary production funds. This is noted in Ian Nathan’s recently published book, Anything You Can Imagine: Peter Jackson & The Making of Middle-Earth.

In January 2012 Lionsgate released a DVD edition of the film as a stand alone title with no extras. If you own an all-region Blu-Ray player, a better option would be the 75th Anniversary restoration from Studiocanal, which was released in June 2018 and is available from various online distributors.

*This is an updated and revised version of an article that originally appeared on the Turner Classic Movies website.