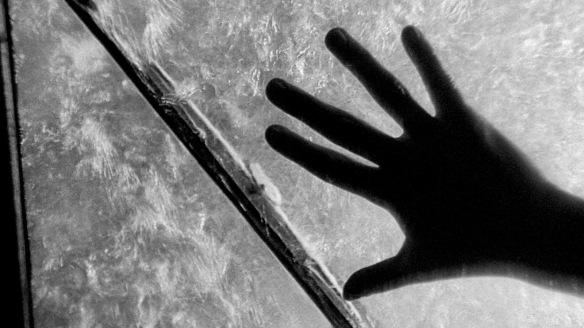 How to describe this blast of creative anarchy from 1965? Fascinating and engaging on so many levels, Man is Not a Bird (aka Covek nije tica, 1965) could be seen as a political parable or a social satire or an offbeat romantic drama or an attempt to merge documentary and fiction in some new form of Eastern European neorealism. 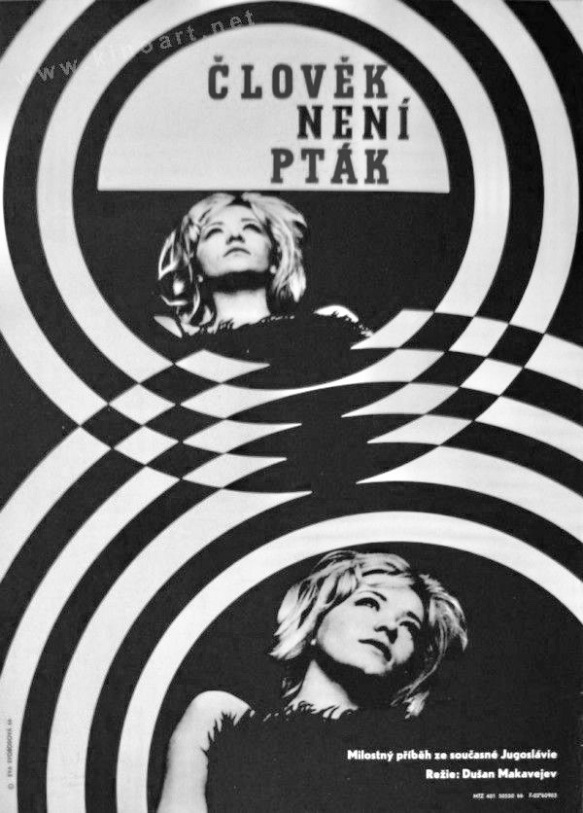 The storyline which involves a polluted mining town, a cheating husband, a flirtacious hairdresser, a traveling turbo engine mechanic, a near-fatal barroom brawl, a Beethoven concert, hypnotism, snake “swallowers” and other circus acts doesn’t lend itself to an easy plot description. Yet, while this might lack the taboo-smashing audaciousness of Dusan Makavejev’s more controversial work (WR: Mysteries of the Organism [1971], Sweet Movie [1974]), Man is Not a Bird is a great place for beginners to acquaint themselves with this true original from Belgrade, Yugoslavia.

Thanks to the DVD release in the Eclipse line from The Criterion Collection, I was able to revisit the director’s first feature film which he made after almost a decade of documentary filmmaking. Even after 53 years, Man is Not a Bird has a fresh, raw vitality that seems at odds with the film’s grim, oppressive setting – the mining town of Bor in Southern Yugoslavia (it was filmed on location). This is a real hellhole, a place where the sun never shines through the thick factory smoke and soot that covers everything. The landscape is about as inviting as any strip-mining town in Appalachia with barren shelves of rock and dirt, scooped out by machines, surrounding the town and massive mud flats replacing forests and fields. 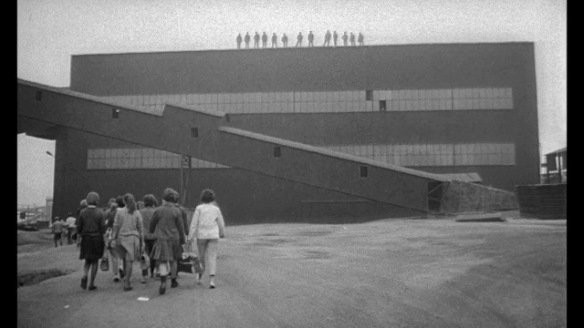 A rural industrial setting sets the bleak visual design of Man is Not a Bird (1965), directed by Dusan Makavejev.

In some ways, the look of the film prefigures the visual universe of Bela Tarr’s Damnation [1987] and Werckmeister Harmonies [2000] but, unlike that Hungarian filmmaker, Makavejev embues his vision with a sly, subversive wit and restless, kinetic energy. This is apparent from the very start of the film in which a hypnotist addresses an unseen audience, citing several examples of superstitious beliefs and folk remedies before declaring, “Magic is absolute nonsense. You must fight it.”

The hypnotist, who is billed as “Roko, The Youngest Hypnotist in the Balkans” and played by the real hypnotist Roko Cirkovic, serves as a framing device who opens and closes the film and also figures prominently in the center section where his audience participation act becomes a metaphor for the movie.  There is also a second, more peripheral narrator who provides a contrasting viewpoint – a newspaper reporter whose coverage of the “news” reflects the party line and what the government sanctions as the truth.

Keep in mind that Man is Not a Bird was made when Yugoslavian filmmakers and their movies were still subject to government approval and were expected to glorify the common worker with socialist-realist works that endorsed Communist Party ideologies. Luckily, things were beginning to loosen up somewhat in 1965 and Makavejev’s film would later be recognized as one of the trailblazers of the Novi film (or Open Film) movement which included fellow countrymen Aleksandar Petrovic (I Even Met Happy Gypsies, 1967) and Zivojin Pavlovic (The Return, 1966). It was the start of a brief but liberating period that had an undeniable impact on world cinema.

Janez Vrhovec stars as Rudinski, the main protagonist of Man is Not a Bird (1968), the directorial feature debut of Dusan Makavejev.

Man is Not a Bird serves up two storylines. In the main one, Rudinski (Janez Vrhovec), a specialist in turbo machines, arrives in Bor on special assignment and meets Rajka (Milena Dravic), a sexy blonde hairdresser who arranges for him to stay at her parents’ house. An older man and not particularly handsome or charismatic, Rudinski immediately arouses Rajka’s curiosity and romantic fantasies. Maybe it’s because he is constantly on the move, traveling from one job to the next, that he represents freedom and a possible escape from the depressed surroundings of Bor. Or maybe it’s because he’s a bit of an enigma and seemingly immune to Rajka’s charms at first, posing a challenge to her. They soon become lovers and the balance of the relationship begins to change when Rajka realizes her effect on him. 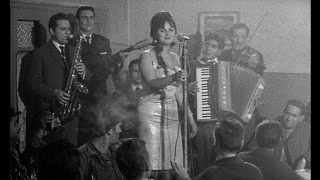 The singer Fatima captivates the working class crowd in Man is Not a Bird (1965), directed by Dusan Makevejev.

In the parallal story, Barbulovic (Stole Arandelovic), a brutish miner, is arrested for his involvement in a barroom brawl in which the singer Fatima was almost stabbed to death. After his release, he returns home to a miserable domestic life with a wife who is more a servant than a companion and constantly playing second fiddle to his mistress. These two narratives never really converge and, in fact, the second one evaporates midway through the film after Barbulovic’s wife (Eva Ras) has an eye-opening revelation after attending Roko’s illusionist show.

And there are other story threads and incidents which actually serve a subversive purpose in Makavejev’s grand scheme such as two factory workers who steal copper wire in a visually ingenious coverup scheme, a truckdriver Romeo named Bosco (Boris Dvornik) who keeps track of his sexual conquests with notches on his steering wheel and a traveling carnival complete with hoochie-coochie dancers, contortionists, snake charmers and knife throwers.

A traveling carnival becomes a subplot in Dusan Makavejev’s Man is Not a Bird (1965), his debut feature.

The carnival sequence, in particular, conjures up the tacky glamor and tawdry appeal of sideshows in Fellini movies like Variety Lights and La Strada and is further proof that the proletariat prefers the low road instead of the high road (an orchestral performance of Beethoven music) when it comes to culture for their own edification. 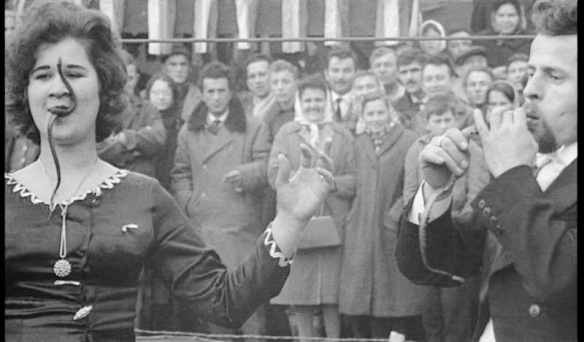 The snake charmers make an impression on the audience in Man is Not a Bird (1965).

Makavejev was regarded with suspicion by the government after the release of Man is Not a Bird, which was attacked by official Yugoslav film critics as being too pessimistic, dark and obscure in terms of its political or moral message. His reputation in his own country didn’t improve with his next two movies, Love Affair, or The Case of the Missing Switchboard Operator [1967] and Innocence Unprotected [1968]. And WR: Mysteries of the Organism from 1971 made him an overnight exile. It was banned in Yugoslavia and he was forced to work in other countries such as France/Holland/Canada (Sweet Movie, 1974), Sweden (Montenegro, 1981) and Australia (The Coca-Cola Kid, 1985). Man is Not a Bird, however, is his glorious beginning, for even if the title suggests an earthbound tale of repression and thwarted dreams, the movie rises above it.

A scene from Dusan Makavejev’s Man is Not a Bird (1965), available from The Criterion Collection.

There are no rules here. Anything goes if it serves the filmmaker’s purpose. Freeze frames, cross cutting to ironic effect, unlikely juxtapositions of music and imagery, jump cuts, parallel storylines, a mix of actors and non-professionals – Man is Not a Bird has an organic and free-wheeling spirit that is clearly its own animal but also borrows freely from such different inspirations as the French New Wave (Jean-Luc Godard, Chris Marker, Jean Rouch) and American independent filmmakers (John Cassavetes, Andy Warhol, Shirley Clarke). In Makavejev’s own words: “The guerilla can use whatever weapons he likes, paving stones, fire, bullets, slogans, songs. The same with movies. We can use everything that comes to hand: fiction, documents, actualities, titles. ‘Style’ is not important. You must use surprise as a psychological weapon.” 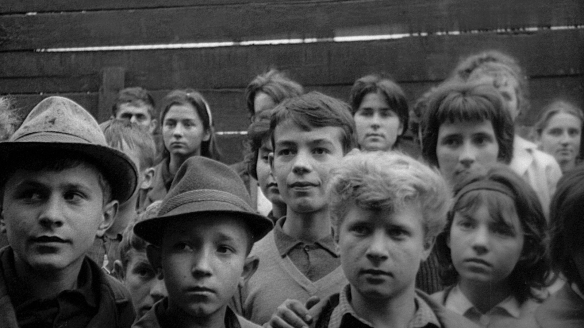 School kids tour a bronze factory and view their future lives in Man is Not a Bird (1965), directed by Dusan Makavejev.

This approach becomes apparent in several striking scenes in Man is Not a Bird. There is a sequence where a group of school children and their guide are touring the copper factory and observing the workers. The dirty, boozing Barbulovic is singled out for praise for his physical prowess and efficiency, though we have already seen evidence of his true character earlier when he was berating and bullying his wife. Their conflict splits over into a public scene which ends up in the police station where Barbulovic admits that he gave away some of his wife’s dresses to his mistress, causing the trouble. He reasons that since the dresses were bought with his money he could give them away to whoever he wanted. This is a model example of the proletariat worker?

Rajka (Milena Dravic) has an affair with a truck driver in Dusan Makavejev’s Man is Not a Bird (1965).

In another key scene, we see Rajka, cheating on her lover Rudinski with the young truck driver. Cutting back and forth between Rajka and the trucker’s sexual tryst in the truck and Rudinski, the guest of honor at a community concert where the orchestra is playing Beethoven’s “Ode to Joy,” Makavavej mischievously juxtaposes the climax of the symphony with the lovers’ mutual orgasm.

Jan (Janez Vrhovec) has a violent reaction to a government sanctioned award in Man is Not a Bird (1965).

Then there is that unforgettable moment when Rudinski realizes his award for 20 years of service to the government was an empty gesture for propaganda purposes only. Staring at his dejected face in the mirror, he savagely smashes it while a band of musicians, hired to pay tribute to him, continue to make merry music. 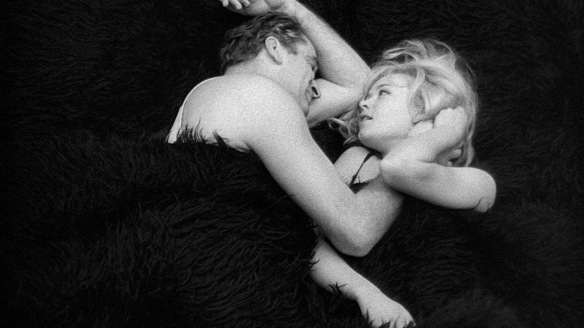 Jan (Janez Vrhovec) and Rajka (Milena Dravic) get to know each other in Man is Not a Bird (1965), directed by Dusan Makavejev.

One of my favorite moments in Man is Not a Bird is the first sexual encounter between Rajka and Rudinski which is framed in total darkness with stark lighting illuminating various parts of their anatomy as they become entwined. Instead of conveying intimacy, it results in a sense of alienation and anonymity while displaying a dazzling surface beauty. In contrast, Rajka, in most of her solo scenes, is eroticized by the camera – at work, walking along the street and particularly in bed, where she is glimpsed lying naked under a furry black coverlet. 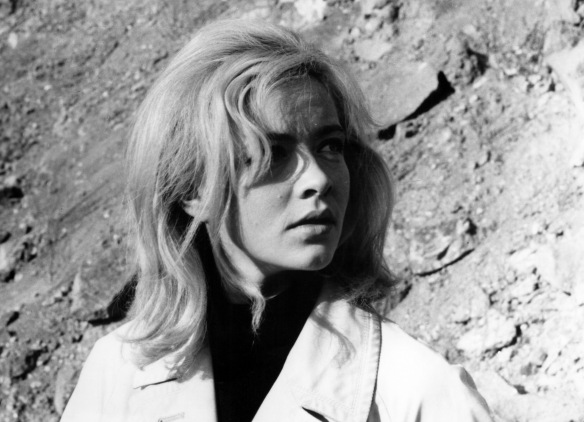 Man Is Not a Bird (1965 Yugoslavia) aka Covek nija tica (US release 1969)
Directed by Dusan Makavejev
Pictured: Milena Dravic

Milena Dravic is absolutely riveting in this film and would go on to enjoy even greater exposure in Makajevec’s WR: Mysteries of the Organism. In 1980 she won a Best Supporting Actress award at the Cannes Film Festival for her role in Goran Paskaljevic’s Special Treatment (aka Poseban Tretman) and she continues to work today, mostly in Serbian TV series and occasional films.

Makavejev brings us full circle at the end of Man is Not a Bird with Rudinski returning to the road, a tiny figure dwarfed by the bleak landscape, and Roko the hypnotist delivering his final remarks: ” Hypnosis is not ordinary sleep but an induced, artificial sleep…For a man asleep can do nothing, but under hypnosis he can carry out the most complex commands, including murder.” 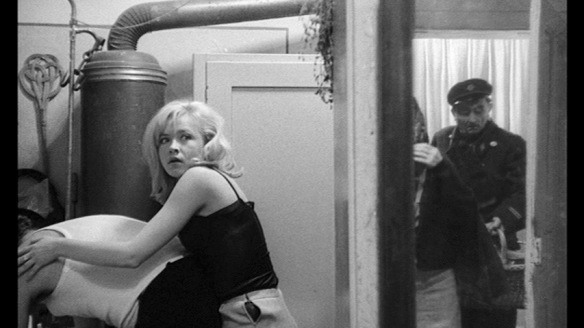 One of the more memorable scenes from Dusan Makavejev’s Man is Not a Bird (1965) starring Milena Dravic (left).

Yes, the Yugoslav government officials were right to worry about Makavejev. And he would continue to be a thorn in their sides for several years, using his films as liberating weapons against the tyranny of propaganda, conformity and repressive regimes.

Man is Not a Bird was first released in the U.S. on VHS by Facets in 1998. In October 2009 The Criterion Collection released Man is Not a Bird on DVD as part of their no frills Eclipse Series (no supplements or Blu-Ray options) in a box set entitled Dusan Makavejev: Free Radical, Eclipse Series 18, which includes two other titles by the director (mentioned in the above article).