There was a time during the late seventies/early eighties when John Heard seemed destined to become a major leading man on the level of William Hurt or Jeff Bridges or some other Oscar-winning actor of his generation. He was impressive in his big screen debut opposite Lindsay Crouse in Between the Lines (1977), an indie comedy-romance about the staff of an underground newspaper in Boston, and even better in such disparate roles as Jack Kerouac in Heart Beat (1980), a self-destructive Viet Nam vet in Cutter’s Way (1981) and Nastassja Kinski’s love interest in Cat People (1982). His performance in Cutter’s Way alone deserved an Oscar nomination but Heard never received any recognition from the Academy during his lifetime. He didn’t become a star either but he kept busy as one of the most in-demand character actors in film and television. Perhaps personal problems kept him from becoming an A-list actor but it was more likely the fact that he did some of his best work in movies few people saw such as Joan Micklin Silver’s Chilly Scenes of Winter (1979), which still stands as my favorite John Heard performance. But there was a major obstacle to overcome in raising awareness of Chilly Scenes of Winter.

How do you market a quirky romantic comedy about a non-glamorous, flawed yuppie couple with uninteresting jobs who live in Salt Lake City? Actually, romantic comedy is probably too deceptive a classification for this sardonic tale of a couple’s courtship and breakup, presented in flashbacks and narrated by Charles (John Heard), the jilted lover.

United Artists was indeed faced with a creative marketing challenge when they first agreed to distribute the 1979 film version of Ann Beattie’s first novel, Chilly Scenes of Winter. The movie was first released under the title Head Over Heels to avoid the dreary connotations of “chilly” and “winter.” Director Joan Micklin Silver, with the studio’s encouragement, also opted for an upbeat, optimistic ending that was faithful in spirit to the fadeout of Beattie’s novel. But none of this helped the film find an audience and the reviewers who compared it unfavorably to Annie Hall (1977), Woody Allen’s equally unformulaic comedy-romance, didn’t help either. So Head Over Heels was shelved until UA’s Classic division came along and decided to give it another chance in 1982.

For the re-release, UA Classics rechristened the film Chilly Scenes of Winter in acknowledgement of its literary source and to capitalize on Beattie’s rising popularity as a fiction writer; at the time, she was a regular contributor to The New Yorker with her wry short stories about middle class baby boomers. The distributor also removed the original happy ending and substituted an alternate one, which was more downbeat but true to the film’s melancholy tone and wintry look. This newly retooled version performed better at the box office than Head Over Heels and eventually turned a profit for the studio but it was hardly a mainstream film. 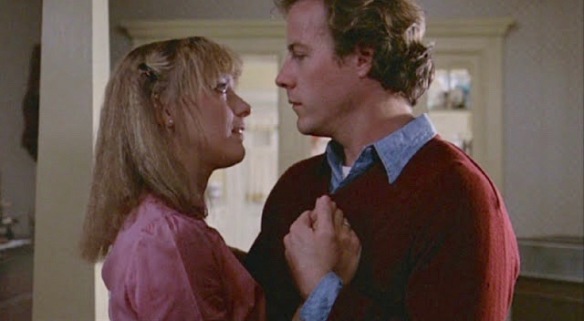 Mary Beth Hurt and John Heard share a fleeting romantic moment in Chilly Scenes of Winter (1979) aka Head Over Heels, based on the novel by Ann Beattie.

The original title of Head Over Heels suggested a possibly whimsical and intoxicating romantic affair but that wouldn’t accurately describe Charles’ condition, which is closer to a full-blown obsession with Laura (Mary Beth Hurt). By today’s standards, he would be considered a stalker. Not only does he regularly stake out Laura’s house to keep tabs on her comings and goings but he even builds a replica of it complete with doll furniture and plastic figurines as stand-ins for Laura and her family. At one point, Charles even gets himself and his roommate Sam invited to Laura’s home by her husband Ox who thinks they’re a gay couple looking to buy one of the new A-frame houses he’s selling. All of this is played for comedy which has a dark underside because Charles’s determination to win Laura back is not so much heroic as it is an obsession.

A publicity photo from Chilly Scenes of Winter (1979) aka Head Over Heels with John Heard (left), Mary Beth Hurt and Peter Riegert.

As for Laura, she is clearly less than Charles’s idealized image of her and knows it; she’s an attractive but selfish and confused individual who is willing to abandon a devoted husband and young daughter so she can “find herself.” She even tells Charles at one point, “I have a realistic opinion of myself. I’m an ordinary person – I can’t live up to this thing that you have about me…In fact, I’m worse than an ordinary person since I left a perfectly decent man for no good reason.”

Mary Beth Hurt has a problem with John Heard’s idealized vision of her in the offbeat comedy-romance, Chilly Scenes of Winter (1979) aka Head Over Heels.

Yet it is the film’s honest, warts-and-all depiction of this seemingly mismatched duo that helps audiences to identify with Charles and Laura; their imperfections and idiosyncrasies ground them in a reality most contemporary romances lack. 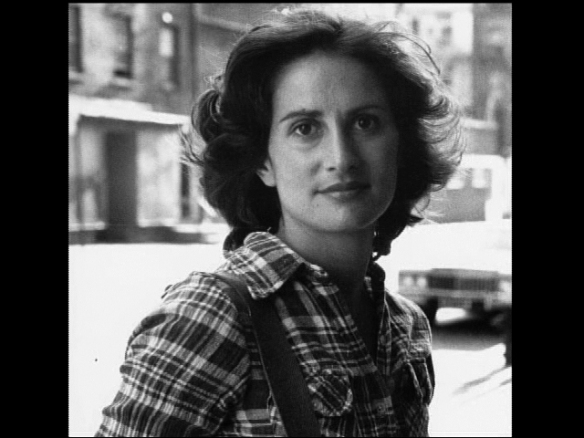 Bringing Chilly Scenes of Winter to the screen was a slow uphill climb for Triple Play Productions which consisted of three struggling actors, Amy Robinson (Mean Streets, 1973), Griffin Dunne (An American Werewolf in London, 1981), and Mark Metcalf (National Lampoon’s Animal House, 1978). Robinson had fallen in love with Beattie’s short story when she first read it and convinced her two partners it was perfect for their film debut as independent producers. According to an interview with Robinson in American Film magazine in September 1985, she said, “We didn’t start out thinking, How can we break into Hollywood, but, rather, How can we make this low-budget movie, Chilly Scenes of Winter? We asked a lot of nuts-and-bolts questions. We had some connections to the business, especially on the creative side, and we used them to gain relatively easy access to the people at the studios. Also, when we first went out to Hollywood, it wasn’t as though we were producers in from Tennessee, naive and empty-handed. We had a book by a rising literary star, Ann Beattie…We were in the right place at the right time…We also had Joan Micklin Silver to direct at a time when there was interest in ‘women’s films.'”

Mark Metcalf, one of the co-producers of Chilly Scenes of Winter aka Head Over Heels

Triple Play Productions opted Beattie’s novel for $2,000 versus $30,000 upon completion of the film. In their first meeting with the author who later said “It was like seeing three of my characters walk through the door,” Robinson, Griffin and Metcalf agreed to both of Beattie’s stipulations to seal the deal. Beattie wanted to appear in Chilly Scenes of Winter – she has a brief walk-on as a waitress in a coffee shop – and she wanted to meet Dean Martin, a curious request that was never fulfilled.

Griffin Dunne, co-producer of Chilly Scenes of Winter and actor (An American Werewolf in London, After Hours)

Originally playwright Michael Weller was slated to direct but after he dropped out Joan Micklin Silver, who was a huge fan of Beattie’s book, offered her services. At the time, Silver was enjoying a movie industry buzz for her recent indie feature, Between the Lines (1977). Once she was committed to the project, Triple Play approached Claire Townsend, an executive at 20th Century Fox, to acquire it. Townsend did indeed pick up Chilly Scenes of Winter and when she moved to a new position at United Artists, she took the project with her, producing and releasing it as Head Over Heels in 1979. 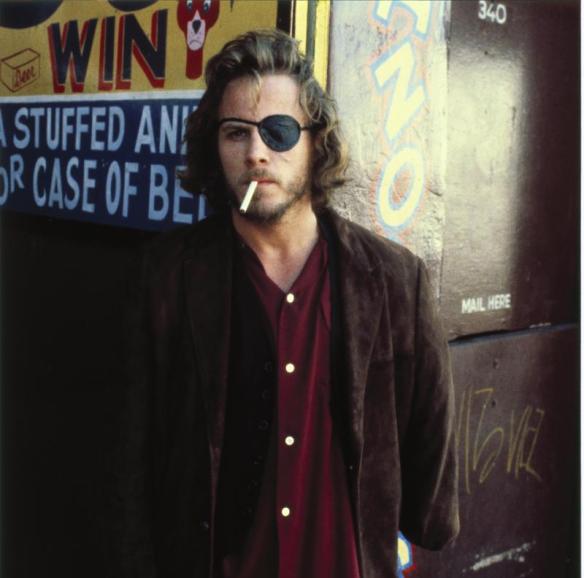 A key factor in the film’s success is the casting. John Heard, who had played the lead in Silver’s Between the Lines, is alternately amusing and maddening as Charles, walking a fine line between self-deprecating humor and deep depression. Next to his fine work as an alcoholic, wounded war veteran in Cutter’s Way (1981), this might well be his most memorable performance. Matching him in an equally tricky role that requires a mixture of feistiness and vulnerability is Mary Beth Hurt who was better known as a stage actress at the time though she had received some recognition for her performances in Woody Allen’s Interiors in 1978. Today she is probably best known for her role in The World According to Garp (1982). 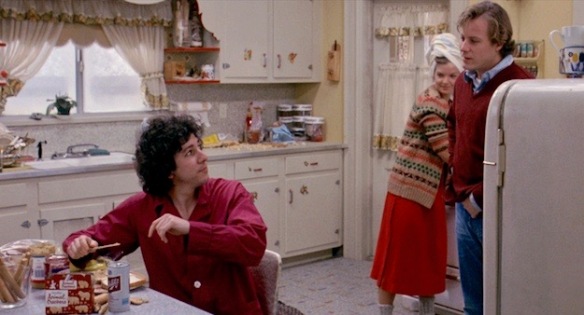 Peter Riegert (left) provides a scene-stealing performance in Chilly Scenes of Winter (1979) aka Head Over Heels.

As good as Heard and Hurt are in their scenes together, they are occasionally upstaged by some of the supporting players. Peter Riegert as Sam, Charles’ unemployed, skirt-chasing roommate, has a merciless wit and charm that steals many a scene with his deadpan zingers. Gloria Grahame is also unpredictably funny and pathetic as Charles’ mentally unbalanced mother, proving that underneath her screen image as a film noir femme fatale was a gifted comedienne struggling to break out. Triple Play producers Griffin Dunne and Mark Metcalf also turn up in amusing minor roles as the health fanatic boyfriend of Charles’s sister and Ox, Laura’s A-frame salesman husband, respectively.

Gloria Grahame plays the neurotic mother of John Heard in Chilly Scenes of Winter (1981), aka Head Over Heels.

Head Over Heels already had something of a small cult following after its initial premiere under that title in 1979 but after the 1982 re-release as Chilly Scenes of Winter, it has slowly gained a reputation as one of the most idiosyncratic and underrated indie films of the seventies. (Film critic Danny Peary devoted a chapter to it in Cult Movies 3). 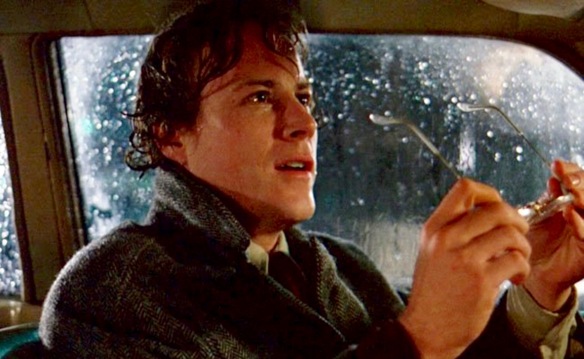 John Heard gives one of his finest performances in Chilly Scenes of Winter (1979), aka Head Over Heels.

For many years, Chilly Scenes of Winter was not available on any format but Twilight Time released it on Blu-Ray in February 2017 in a limited special edition that includes a commentary by Joan Micklin Silver and producer Amy Robinson.

*This is a revised and extended version of an article that originally appeared on the Turner Classic Movies website.