By the mid-1980s the Italian film industry was in a state of major decline. The glory years of the fifties and sixties were now fondly remembered footnotes in the history of world cinema and even the popular film genres – giallo, poliziotteschi, spaghetti western and horror – were near the end of their heyday. There were still a few determined stragglers such as Tinto Brass with his fetish based erotica (The Key, Miranda, Snack Bar Budapest) and Enzo G. Castellari, who soldiered on with formulaic hybrids like 1990: The Bronx Warriors, Tuareg: The Desert Warrior and Striker. But the horror genre, in particular, was suffering with masters of the macabre Lucio Fulci and Dario Argento trying but failing to top past high water marks like The Beyond (1981) and Suspiria (1977). It was during this downward trend that Gianfranco Giagni made his directorial debut with The Spider Labyrinth (Italian title: Il Nido del Ragno, 1988).

In some ways a throwback to some of Italy’s most stylish supernatural thrillers of the seventies like Tonino Cervi’s Queens of Evil (1970) and Giorgio Ferroni’s Night of the Devils (1972), The Spider Labyrinth is an often entrancing mood piece featuring tightly paced direction, a mounting sense of menace and doom, highly atmospheric set design and lighting, an impressive ensemble cast and various narrative eccentricities that some viewers will find laughable, absurd or so bizarre that they seem to operate on the level of a fever dream.

An eerie flashback sequence featured in The Spider Labyrinth (1988), directed by Gianfranco Giagni.

The pre-film credits sequence sets the mood as two boys play a game of hide and seek in a garage-like space and one of them hides in a musty old wardrobe. When the latter is locked inside by his friend, he sees a large spider above him and freezes in fear. At first this appears to be a nightmare as our protagonist, Professor Alan Whitmore (Roland Wybenga) wakes up in bed in a cold sweat. But later in the film, a flashback reveals that the hide and seek episode was from Alan’s childhood. It is both a premonition and a prophecy of Alan’s descent into a giant rabbit hole. 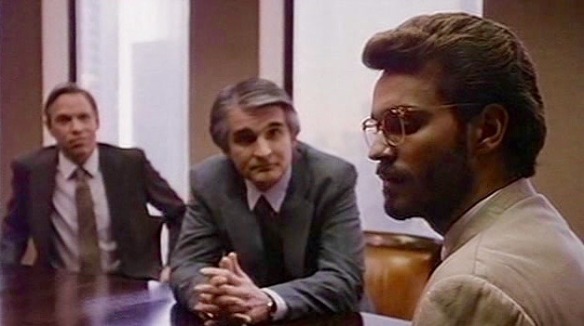 Professor Alan Whitmore (Roland Wybenga, right) is sent to Budapest to find out why a renowned professor has stopped communicating with the university about his top secret research in The Spider Labyrinth (1988).

The present day story begins in Dallas, Texas as Alan, a specialist in oriental languages, meets with a trio of university faculty members who convince him to travel to Budapest to meet with Professor Roth. The trio are unusually cryptic about the urgency of the trip but stress the importance of Roth’s research and entrust Alan with a sealed letter to deliver in person.

Paola Rinaldi plays Genevieve, an assistant to a famous professor, who agrees to help a visiting scholar uncover a puzzling mystery in The Spider Labyrinth (1988).

When he arrives in Budapest, Alan is picked up by Genevieve (Paola Rinaldi), Roth’s voluptuous assistant, and taken to the professor’s home. There he encounters the suspicious and unwelcoming wife of Roth (Margareta von Krauss) who reluctantly allows him to see the professor for a few minutes. Roth is visibly troubled and fearful, whispering in a low voice to come back later while entrusting Alan with a black notebook. A black metal ball suddenly crashes through the window and Alan is momentarily distracted while the professor slips away unseen.

We are clearly in Dario Argento territory where logic and reality are secondary or non-existent in relation to mood and atmosphere. The off-kilter ambiance continues as Genevieve accompanies Alan to his hotel, which is run by the enigmatic Mrs. Kuhn (Stephane Audran), who first appears stroking a black cat. There is also something odd and unsettling about the hotel’s clientele. From this point on, Alan is drawn into increasingly disturbing and perilous encounters in his quest to uncover the truth about Professor Roth and his confidential research.

Although The Spider Labyrinth begins as a murder mystery, it quickly evolves into a supernatural chiller. Most viewers will probably surmise where Alan’s investigation is leading but there are some genuine WTF surprises along the way such as a superhuman witch-like assassin who looks like Grace Zabriskie with really bad teeth and a truly bizarre stop-motion animation sequence (from Sergio Stivaletti). If you aren’t expecting some forgotten horror masterpiece, The Spider Labyrinth is a fun ride despite some obvious drawbacks like the awkward English dubbed dialogue or the condition of the existing film print. (You can view it on Youtube in acceptable and barely viewable versions but I hope Arrow Films or Camera Obscura will release the restored Italian version with English subtitles on Blu-Ray someday). 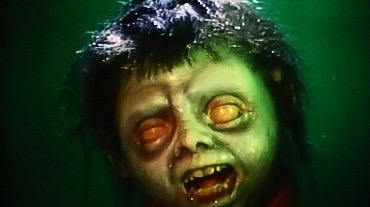 One of the more bizarre stop-motion animation sequences in the supernatural chiller, The Spider Labyrinth (1988).

If you are a fan of excessive horror gore and violence, you should look elsewhere. Nudity and sexual content are also relatively discreet compared to say, a director like Joe D’Amato (Beyond the Darkness, Sexy Nights of the Living Dead, Absurd). That said, there is a nude lovemaking scene involving human spider drool and an unforgettably hypnotic interlude where Genevieve undresses and presses her naked body against a full length apartment window as if taunting Alan, who lives directly across the street.

Alan (Roland Wybenga) and Genevieve (Paola Rinaldi) are swept up in a secret cult conspiracy in The Spider Labyrinth (1988), directed by Gianfranco Giagni.

Several sequences in The Spider Labyrinth evoke or pay homage to other Italian cult classics in original, non-derivative ways such as a creepy murder that would not be out of place in Suspiria. In this case, the victim wanders through a green-lit maze of billowing sheets before being attacked by clutching arms and hands armed with knives.

One of the memorable murder sequences in The Spider Labyrinth (1988) suggests the stylistic influence of Dario Argento’s Suspiria (1977).

The recurring metal ball that rolls into a room before something horrific occurs is like a variation on the ghostly bouncing ball from Mario Bava’s Kill, Baby…Kill! (1966) and Fellini’s “Toby Damnit” segment from Spirits of the Dead (1968). The escalating sense of paranoia and intimations of satanic cult worship are reminiscent of Sergio Martino’s All the Colors of the Dark (aka They’re Coming to Get You, 1972). And some viewers have noticed connections to the work of H. P. Lovecraft (The Call of Cthulhu, The Case of Charles Dexter Ward).

A subterranean spa in Budapest is one of several atmospheric settings in The Spider Labyrinth (1988).

There is even one phantasmagorical scene where Alan wanders through a subterranean wasteland of rotting corpses, spider webs and putrid pools of water that might have been an inspiration for the eerie ossuary scenes in Michele Soavi’s Cemetery Man (Italian title: Dellamorte Dellamore, 1991).

Alan (Roland Wybenga) gets lost in a maze of streets while trying to find a Budapest antique shop in The Spider Labyrinth (1988).

The Spider Labyrinth cast features an intriguing balance of seasoned professionals like Stephanie Audran (the former wife of French director Claude Chabrol) and William Berger alongside relatively unknown actors like Roland Wybenga, who only starred in three films. Wybenga makes a low-key but appealing protagonist out of a stereotype – the socially awkward but brilliant academic who is too focused on his work to see the danger signs. Paola Rinaldi is even better as the seductive and inscrutable Genevieve. Romanian actress Margareta von Krauss, on the other hand, is alternately a frost queen and a feral creature in a dual appearance performance that cannot be considered great acting on planet Earth…and this might be the tipping point for loving or hating the movie. 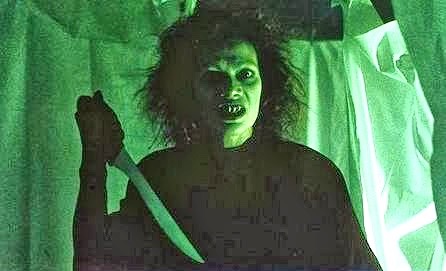 Margareta von Krauss is a supernatural force of evil who appears invincible in The Spider Labyrinth (1988).

As for Stephanie Audran, she was enjoying international acclaim for her performance in the previous year’s Babette’s Feast (1987), which won the Oscar for Best Foreign Language Film. While The Spider Labyrinth is clearly not Academy Award material, Audran is suitably compelling and ominous as a concierge with a hidden agenda. William Berger, looking like a homeless derelict, is also memorable as a stranger with a warning for Alan. Berger, of course, had a long and fruitful career in Italian genre films, appearing in such cult favorites as Gianfranco Parolini’s Sabata (1969), Mario Bava’s 5 Dolls for an August Moon (1970) and Enzo G. Castellari’s Il Giorno del Cobra (1980).

William Berger plays a street tramp who tries to warn a visiting professor to leave Budapest at once in The Spider Labyrinth (1988).

And what happened to director Gianfranco Giagni? He carved out a career primarily in Italian television as a director of such TV series as Valentina (1989) and Donna (1996). His later filmography was mainly devoted to documentaries but he did direct another feature film in 2000, Nobody’s Heart (Italian title: Nella terra di nessuno), a political drama starring Ben Gazzara. It is also worth noting that producer/writer/director Tonino Cervi (Today We Kill, Tomorrow We Die!, Queens of Evil, Nest of Vipers) had a hand in the screenplay. 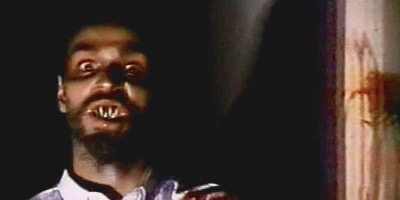 A scene from the supernatural thriller, The Spider Labyrinth (1988), directed by Gianfranco Giagni.

If The Spider Labyrinth had been made a decade earlier, it might be better known today but it was mostly ignored in its own country and never received theatrical distribution in the U.S. or most other countries with the exception of Japan and West Germany. But for fans of Italian horror, it is definitely worth seeking out.

The set design in The Spider Labyrinth (1988) is one of the film’s chief virtues.