It is often regarded as the most important British television drama ever written. The controversy it aroused after its premiere broadcast in 1966 on the Wednesday Play series not only challenged the general perception of TV as a shallow medium but also exposed an endemic social problem in England that the government often overlooked – homelessness. As timely today as it was then, Cathy Come Home is a rare example of a television drama whose impact on the media and the government was so pervasive that it resulted in the creation of “Shelter,” a housing for the homeless charity.

Cathy Come Home was produced by Tony Garnett, who was responsible for revolutionizing British television drama in the early sixties through the introduction of challenging subject matter (abortion, welfare, workmen compensation) and cinematic techniques borrowed from the French New Wave and the Italian neorealism films. Working with writer Jeremy Sandford and director Ken Loach, Garnett fashioned a fictional narrative based on real case histories and filmed it as a documentary, using real locations and non-professional actors with the exception of the key players in the drama.

Reg (Ray Brooks) & Cathy (Carol White) look for a place to live in Ken Loach’s social drama, Cathy Come Home (1966), about the plight of homeless people in the U.K.

Cathy Come Home begins on a deceptively light note with the romantic courtship of Cathy (Carol White) and Reg (Ray Brooks). From there the narrative quickly accelerates into a downward spiral following the couple’s marriage and the birth of their first child to Reg losing his job after a work-related accident. As Cathy and Reg’s financial situation becomes more dire, Cathy continues to get pregnant, eventually trying to manage three children while living in a squatters’ camp of abandoned trailers. When the family is forced out of their encampment by a fire set by irate locals, they set up home in a bombed-out ruin with little protection from the elements.

The physical and emotional strain on Cathy and Reg take their toll and they reluctantly turn to the state for aid. In order to be eligible for government assistance, however, Cathy and the children must be separated from Reg and the enforced estrangement does irreparable damage to the family. Cathy’s rebelliousness at the often dehumanizing treatment of her family by social workers results in a final outrage – the placement of her children in foster care while she is left to fend for herself on the streets.

Garnett and Loach had previously collaborated on the television adaptation of Nell Dunn’s play Up the Junction, which brought the issue of abortion into viewers’ living rooms (It was later made into a film by Peter Collinson in 1968 starring Suzy Kendall). Cathy Come Home, however, is the movie that established the trio of Garnett, Loach and Sandford as social advocates, using the dramatic power of film and television as their weapon for change. 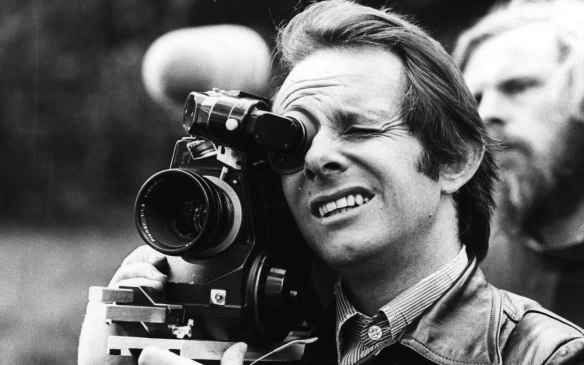 A photo of drector Ken Loach in the mid-sixties.

In Loach on Loach (Faber and Faber), the director stated, “I think Cathy’s a film about a social structure; it’s not a political film because it doesn’t deal with structure at all – the structure of what makes people homeless. It accepts the fact of homelessness without analysis, and it’s the story of a family caught in that grip and how it’s shattered by it. But it doesn’t try to explain the cause, and therefore it doesn’t deal with politics; it deals with personal tragedy. Of course, everyone says they’re against homelessness, in the same way people say they’re against sin. Politicians of various shades and hues spoke up and claimed Cathy as their own. They said, ‘What a powerful film. Yes, we’re against homelessness, and our remedy for it is this-that-and-the-other.’ I remember that Anthony Greenwood, who was then Minister of Housing, asked to see us and told us how much he appreciated Cathy. We said, ‘Fine. But what are your plans to deal with homelessness?’ And he ummed and ahhed and talked around it and obviously…nothing.”

A great deal of Cathy Come Home‘s dramatic impact was due to the naturalistic performances of Carol White and Ray Brooks as Cathy and Reg and the fresh, improvised nature of Tony Imi’s cinematography, all of it shot on real locations. The final scene, in particular, is as emotionally devastating as the ending of such neorealism classics as Vittorio De Sica’s The Children Are Watching Us (1944) or The Bicycle Thief (1948). 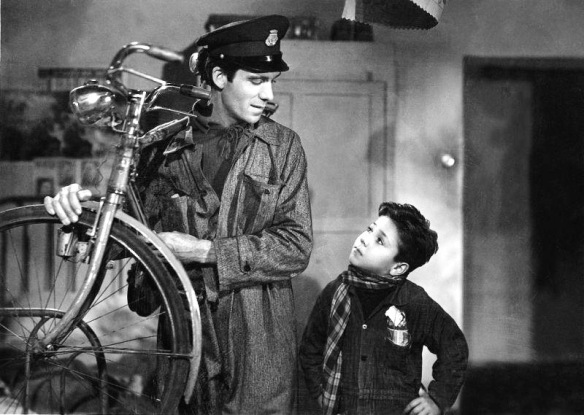 Lamberto Maggiorani (left) and Enzo Staiola play the unfortunate father and son who are robbed of their most valuable possession in The Bicycle Thief (1948), directed by Vittorio De Sica.

Loach explained, “It was all done very quickly, obviously with a hidden camera. The key thing was to find a camera position that would give us good coverage of what was happening and wouldn’t be seen by the people passing by. We gave Carol White a position with the two kids on the station seats and then let her sit there for a bit and found a way to cue the actors playing the social workers and the police to come over and take the children…It was before the days of walkie-talkies, so we had to use hand signals. We only had one shot at it really because you don’t want to put the kids through that sort of thing more than once. It was upsetting to do it, although we were running around with a camera so fast and juggling so many elements that we didn’t have time to dwell upon that while we were doing it. Those feelings hit you more in retrospect. We shot Cathy in three weeks. It was quite an extraordinary chase around.”

Direction Ken Loach on the set of one of his films circa the 1960s.

After Cathy Come Home, Loach and Garnett would collaborate on several other TV dramas in the Wednesday Play series before Loach made his feature film debut in 1967 with Poor Cow, also starring Carol White. From that point on, Loach would divide his time between television and motion picture projects that tackled controversial topics with little concern for commercial trends in popular cinema. Among his most critically acclaimed work are Kes (1969), the story of a working class teenager in Barnsley whose training of a young kestral hawk gives meaning to his life; Family Life (1971), a drama which incorporated R.D. Laing’s theories into its portrait of a suicidal nineteen-year-old; Riff-Raff (1991), an unexpected comedy-drama about a construction worker challenged by rules and regulations under Margaret Thatcher’s regime; and The Wind That Shakes the Barley (2006), a sympathetic tale of two brothers working for the IRA which won the Golden Palm at the Cannes Film Festival. 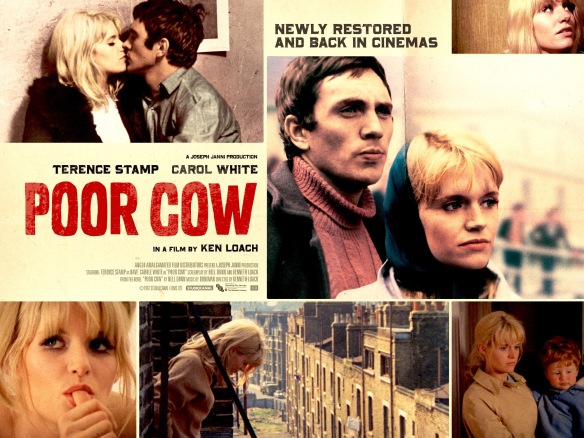 Carol White, who had such a promising film career after receiving international acclaim for her performances in Loach’s Cathy Come Home and Poor Cow was never able to build on her past successes, either through bad luck or poor choices in her film roles. Her final film appearances were minor supporting roles in such movies as Henry Jaglom’s Eating (1990) and the Lorenzo Lamas rap music drama, Body Rock (1984). She died in 1991 of complications from a liver disease though it was long rumored she had a serious alcohol and drug addiction and her death may have been related to that.

When considering the legacy of Cathy Come Home, Derek Paget, in his introduction to Jeremy Sandford’s published screenplay (Marion Boyars), summed it up best when he wrote, “Some commentators take the nostalgic view that in the 1960s television was the best it has ever been. This is wishful thinking, but it is certainly true that Cathy Come Home was a film whose time was right. It gave due prominence to a social problem, attacked the public conscience very effectively and was part of a select but proud roster of important television dramas. It registered at the time, and continues to register, on both the documentary and the drama scales. Modern students are ready enough to transpose the supposedly dated factual material into their own times, for there is still a housing problem in the UK. A modern audience still responds to Cathy’s human dilemma on the level of the representative ‘Everywoman’ example she provides.”

Cathy Come Home has never been released in the U.S. on any format though you can still find region B DVD copies of it on the Amazon UK website. The film has also been broadcast on Turner Classic Movies in the past but it is certainly due for a Blu-Ray upgrade as one of Loach’s most impactful and important early films. 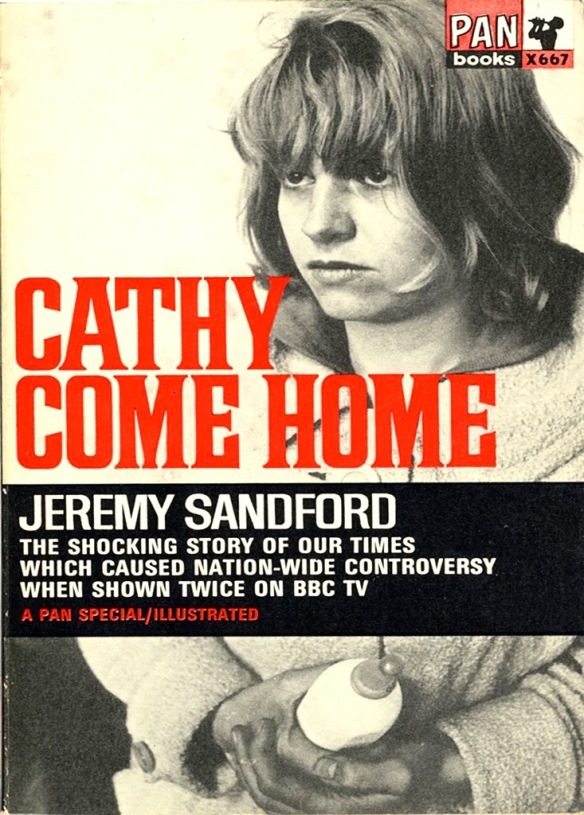 *This is an updated and revised version of the original article that first appeared on the Turner Classic Movies website.