A paranoid conspiracy thriller delivered in a droll tongue-in-cheek style with generous helpings of black comedy and anti-establishment satire doesn’t really fit neatly into any genre and Kihachi Okamoto’s The Age of Assassins (1967 aka Epoch of Murder Madness; Japanese title: Satsujin Kyojidai) was generally dismissed by critics and avoided by audiences when it was first released in the late sixties. Like many of Okamoto’s films, it didn’t receive theatrical distribution outside of its own country and that’s a shame because the film has the essential goods to become a bona fide cult classic on the order of Seijun Suzuki’s Branded to Kill (1967) or Kinji Fukasaku’s Black Lizard (1968). The Age of Assassins arrived at the tail end of the secret agent craze but it is not really a James Bond parody. Think of it instead as a crazy quilt journey through an off-kilter, pop culture universe where no one is who they appear to be.

Tatsuya Nakadai plays a befuddled college professor turned man of action in The Age of Assassins (1967), directed by Kihachi Okamoto

Thanks to repertory screenings in recent years at venues like The Japan Society in NYC and the Oklahoma City Museum of Art, The Age of Assassins is slowly acquiring a new following after being ignored for almost fifty years. The film’s stylish direction, frenetic pacing, playful dialogue, eclectic music score by Masaru Sato and dazzling black and white cinematography by Rokuro Nishigaki remain fresh and inventive even today but the real surprise is Tatsuya Nakadai in one of his most offbeat and unexpectedly comic performances.

Tatsuya Nakadai gives an uncharacteristic comic performance as the nerd hero of The Age of Assassins (1967).

Next to Toshiro Mifune, Nakadai is probably Japan’s most celebrated actor and is still making films today at the ripe old age of 84 (his most recent feature was 2017’s Lear on the Shore). He has worked with nearly every major Japanese director of the 20th century with the exception of Yasujiro Ozu and Kenji Mizoguchi and a cursory glance at his filmography reads like a guide to the masterworks of Japanese cinema. He first attracted notice as a yakuza in Masaki Kobayashi’s Black River (1957). He played an embittered cripple in Kon Ichikawa’s Conflagration (1958), the anguished idealist in the anti-war epic The Human Condition (1959-1961), a charming but devious opportunist in Odd Obsession (1959), a sad, unrequited lover in Mikio Naruse’s When a Woman Descends the Stairs (1960), and Toshiro Mifune’s intense, brooding rival in both Yojimbo (1961) and Sanjuro (1962), both directed by Akira Kurosawa.

Tatsuya Nakadai plays a frightening sociopathic samurai in The Sword of Doom (1966).

Nakadai also played the honorable but unjustly wronged samurai in Harakari (1962), which he often cites as his favorite film, a diligent detective in High and Low (1963), a crazed swordsman in Kihachi Okamoto’s The Sword of Doom (1966), a disfigured businessman with a new face and identity in Hiroshi Teshigahara’s The Face of Another (1966), an inflexible government retainer in Samurai Rebellion (1967), a country bumpkin turned skilled swordsman in Kill! (1968), and a cold-blooded fatalist in Hideo Gosha’s Hitokiri (1969). Other roles that stand out in his later years include his performance as a yakuza/former convict in The Wolves (1971), a self-deceptive slacker in I Am a Cat (1975), a petty thief who masquerades as a powerful warlord in Kagemusha (1980), and the bewildered King Lear-like figure in Ran (1985). 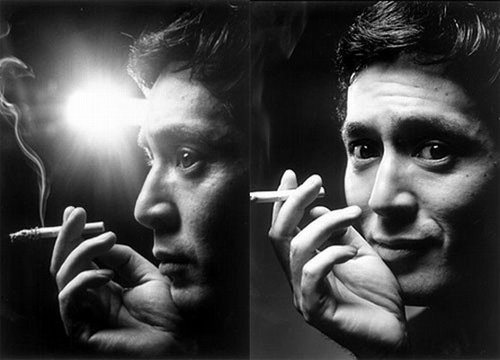 Japanese actor Tatsuya Nakadai could have settled for being a screen matinee idol but he had a higher calling as a serious dramatic actor.

With his handsome features and large expressive eyes, he could easily have opted for a conventional leading man career but instead Nakadai was consistently drawn to serious and dramatically challenging work. That’s why it is such a treat to see him shift gears and reveal his comedic side in The Age of Assassins. In the key role of Shinji Kikyo, Nakadai plays a bumbling, low-paid college professor who gives new meaning to the term “nerd.” But instead of reaching for the goofy extremes of say, Jerry Lewis in The Nutty Professor, Nakadai takes a more deadpan approach to his social misfit, whether he is smelling his own socks like a forensic expert or wandering unarmed into lethal situations.

A lethal assassin who dispatches his victims with razor sharp card tricks meets his match in The Age of Assassins (1967).

He lives in a squalid one room apartment with a bust of his beloved mom, talks to himself, and drives a sputtering automobile in need of new brakes. He is also extremely myopic and has some physical hygiene issues including a bad case of Athlete’s foot and an aversion to shaving. When Shinji becomes the random target of a hit man, his clueless nature actually works to his advantage….or is it all a pose?

The Age of Assassins has a bravura opening sequence that sets the surreal tone for everything that follows. In a white on white set design, we see a hallway lined with mental patients behind bars, some of them highly agitated. One of them is ranting, “Defeat the brutal British and Americans!” The head of the asylum is Dr. Shogo Mizorogi (a delightfully wicked performance by Hideyo Amamoto) and he ushers his visitor, a former Nazi named Bruckmayer (Bruno Laske) past the inmates and into his private office where bizarre, larger-than-life sculptures emerge from the walls like manifestations of madness.

Better watch your back around this undercover murderess in The Age of Assassins (1967).

Mizorogi is actually the head of a secret organization called The Population Control Council which is dedicated to eliminating the unimportant members of society via anomymous assassins and Bruckmayer has come to test the organization’s effectiveness. He spontaneously picks three names out of a phone book and Mizorogi promises to produce their bodies as proof of his group’s expertise within two days. The stalking of the first two victims is genuinely creepy with one encounter taking place on a country lane at night (an amorous businessman is dispatched by an eye patch-wearing femme fatale) and the other occurring on a deserted city street (a shuffling assassin with a cane pursues and shoots a terrified woman).

The third assassination attempt, however, fails miserably when the target, Kinji, clumsily causes the bust of his mother to topple and crush the head of his would-be murderer. He rushes out to inform the police but when they return, the hitman’s body is gone. Keiko (Reiko Dan), a reporter for the Weekly Mystery magazine, tries to get the details from Kinji over dinner but they are soon sidetracked by Otomo Bill (Hideo Sunazukma), a petty thief who attempts to steal Kinji’s dilapidated car. This unlikely threesome soon become allies in an attempt to uncover and expose the sinister masterminds behind the Population Control Council.

Shinji Kikyo (Tatsuya Nakadai) adjusts to his “new look” in the Japanese satire, The Age of Assassins (1967).

In an attempt to foil his pursuers, Kinji is convinced by Keiko to change his appearance and so he reluctantly shaves his face, dresses like a hipster priest and foregoes wearing glasses even though he can barely see. This is merely the first stage in a gradual transition that suggests this seemingly befuddled academic may be hiding a secret agenda.

The sinister Dr. Mizorogi (Hideyo Amamoto, right) poses a major threat to the seemingly clueless Shinji (Tatsuya Nakadai) in The Age of Assassins (1967).

An increasingly paranoid tone and unexpected twists and turns in the narrative consistently keep the viewer off balance in The Age of Assassins but there is also a subversive sense of humor at work, especially in the depiction of the criminally deranged Dr. Mizorogi with his monogrammed cigarettes and ominous black gloves a la Dr. Strangelove. He also gets some of the best dialogue whether he’s casually sipping tea in a cafe – “I just like to watch the exploited workers” – or sharing his philosophical views: “Throughout human history everyone who has done great things has been crazy – Dostoyevsky, Nietzsche, Van Gogh, Hitler, Nero…and man’s greatest desire is undoubtedly war because it’s fun and mass murder is the most fun.”

Another murder attempt foiled in the conspiracy thriller satire, The Age of Assassins (1967).

Even when the bizarre proceedings seem overly convoluted (a second viewing helps clarify some of the shadowy minor characters and narrative threads), Rokuro Nishigaki’s unusual camera set-ups and atmospheric lighting keep you riveted on a visual level. Some of the more memorable sequences include an eerie seance at the Japan Spiritualism Research Center, a sexy encounter with two female hitchhikers at a resort near Mount Fuji, an army battlefield skirmish that becomes a mini-world war and a deadly duel to the death between Mizorogi and Kinji in the asylum.

The climatic showdown in The Age of Assassins (1967), starring Tatsuya Nakadai (center) and directed by Kihachi Okamoto.

Director Kihachi Okamoto is probably best known for The Sword of Doom (1966) and Kill! (1968) – both available from The Criterion Collection – but he remains mostly unknown in the West possibly due to the fact that many of his films specifically reference Japanese culture and history that are not familiar or accessible to non-Japanese audiences. Okamoto was a 19 year old university graduate when he was drafted for WWII and those horrific years had a life changing effect on his world view which may explain why almost a third of his movies are war-themed. He also favored the genre known as jidai-geki (period films set between 1616-1868 in the Togukawa era) in which samurai warriors were the main protagonists. A frequent collaborator was Toshiro Mifune who starred in eight of Okamoto’s movies including Samurai Assassin (1965), Red Lion (1969) and Zatoichi Meets Yojimbo (1970).

The director was said to have been a lifelong fan of John Ford and one of Okamoto’s final films was the western, East Meets West (1995), which was set in the American West of 1860 and featured a samurai in pursuit of thieves who stole gold from a Japanese mission. Okamoto also made his fair share of yakuza thrillers such as The Big Boss (1959) and The Last Gunfight (1960) and directed a handful of razor-sharp satires like The Human Bullet (1968). But The Age of Assassins is one of his most audacious and original films, effortlessly blending action, suspense and satire into a potent cinematic cocktail. It is not currently available on Blu-Ray or DVD from authorized distributors in the U.S. but you can get a very nice DVD-R of The Age of Assassins (with English subtitles) from European Trash Cinema (http://www.eurotrashcinema.com).

Other websites of interest