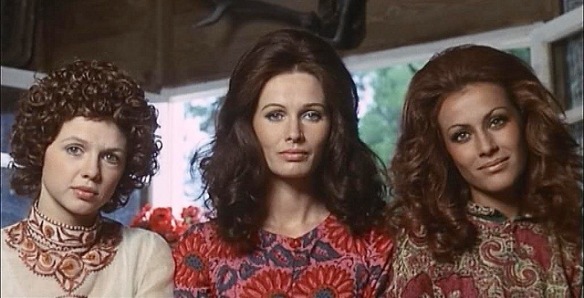 (from left to right) Haydee Politoff, Ida Galli and Silvia Monti in Queens of Evil (aka La Regine, 1970)

Tales of the Devil seducing and destroying man have been a popular theme in cinema since the silent era but Queens of Evil (aka La Regine,1970) puts a new spin on the concept which departs from the more familiar treatments we’ve seen in Faust (1926), The Devil and Daniel Webster (1941) or Rosemary’s Baby (1968). It’s weird, dreamlike, sexy, ominous, often unpredictable and unintentionally funny at times (in the English dubbed version). Though often lumped in the Italian horror category, Queens of Evil, directed by Tonino Cervi, is closer to a gothic fairy tale for adults or a cautionary allegory for its era about young idealists who reject the status quo but are susceptible to corruption when their innermost desires are unleashed.

Italian filmmaker Tonino Cervi is not well know in the U.S. but he was an important figure in Italian cinema from the fifties through the late seventies – first as a producer for such high profile talents as Bernardo Bertolucci (The Grim Reaper), Alberto Lattuada (Mafioso), Michelangelo Antonioni (Red Desert) and Francesco Rosi (The Moment of Truth) and secondly, as a screenwriter and director who gravitated toward lightweight, erotic comedies (Chi dice donna dice donna) and overheated melodramas (Nest of Vipers). Spaghetti western fans hold him in held regard for his 1968 directorial debut, Today It’s Me, Tomorrow You (aka Oggi a me…domain a the!), inspired by John Sturges’ The Magnificent Seven, but his follow-up effort, Queens of Evil (aka La Regine,1970), is unlike anything else he ever did and deserves to be better known. The satanic aspects of the film may have been influenced by Rosemary’s Baby but Queens of Evil also prefigures The Wicker Man (1973) and The Perfume of the Lady in Black (1974) in terms of sacrificial rites and secret covens. 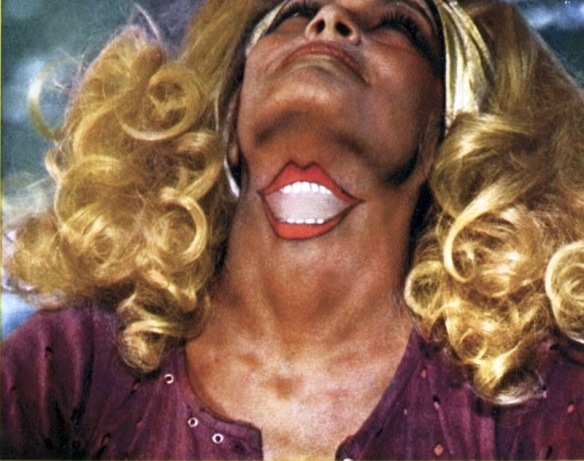 A typically bizarre image from the dreamlike Italian horror fantasy, Queens of Evil (1970).

[Spoilers ahead!] The film begins as a road trip but soon descends into a head trip with free-spirited hippie David (Ray Lovelock) riding his motorcycle into parts unknown in the rural countryside. As darkness falls, he encounters a well dressed gentleman (Gianni Santuccio) and his luxury limo, stranded on the road with a flat tire. David offers to help and the stranger responds, “I’d offer you a hand but a year ago I sprained my back and you’d need two jacks to straighten me up again.” As David replaces the tire, the limo driver engages him in a conversation that questions his values and world view.
Man: About your hair. You look like a tramp.
David: Maybe that’s the way I want to look.
Man: But why go around looking like a tramp when you can do lots of important things that can be useful. Nowadays it’s possible with a little effort to find yourself a good position. You can get married, raise a family.
David: I don’t think I can stay faithful to one woman.
The stranger ends their conversation by saying, “You’ll realize too late that you’ve reneged on your revolutionary ideals and fallen at last as a slave to sex and therefore to the devil.”

Gianni Santuccio plays the ominous stranger David (Ray Lovelock) meets on the road at night in Queens of Evil (1970).

The stranded motorist has an ominous aura which becomes even more pronounced as their brief encounter concludes with a high speed chase/car crash. After that, the film wanders into increasingly strange territory as David meets Liv (Haydée Politoff), Samantha (Silvia Monti) and Bibiana (Ida Galli aka Ewelyn Stewart), a sister trio who live in a remote house in the forest (David compares it to “Snow White’s house” which sets up the dark fairy tale-like narrative transition). The women with their outlandish wigs, wardrobes, makeup and behavior could be exotic hookers or avant-garde performance artists or maybe witches.

(from left to right) Ida Galli, Haydee Politoff and Silvia Monti in Queens of Evil (1970)

The interior of the sisters’ house is equally bizarre like some pop art experiment gone awry with floor to ceiling portraits of the women adorning the walls and brightly colored futons and pillows covering the floors. They invite David to stay as long as he likes and he abandons his cross country motorcycle adventure to sink further and further into the hedonistic pleasures that are offered him. You know something is seriously wrong at his first breakfast with the sisters when they serve him two huge cakes – appropriate for a wedding party, not four people – and he chows down with animalistic relish. 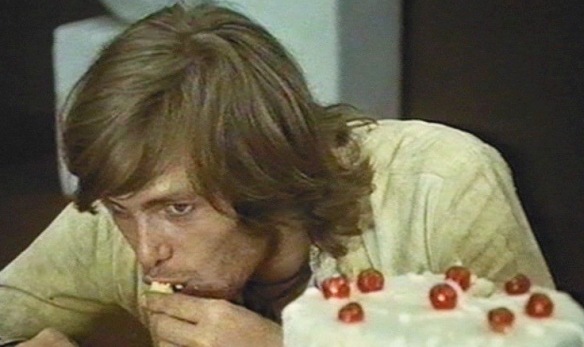 David (Ray Lovelock) proves that hippies are slobs at the dinner table in Queens of Evil (1970).

David is soon transformed from a free-spirited drifter into a more than willing house guest. His laid-back, idyllic existence eventually gives way to doubt and suspicions about the behavior of his hosts. In one of the film’s most atmospheric scenes, David follows the three women deep into the woods where he witnesses them perform a strange rite by firelight. Other odd occurrences include a late night visit from a mysterious male caller, a surreal lightning storm (cue the cheesy special effects), a foreboding dream sequence and the recurring motif of an owl who knows and sees all. 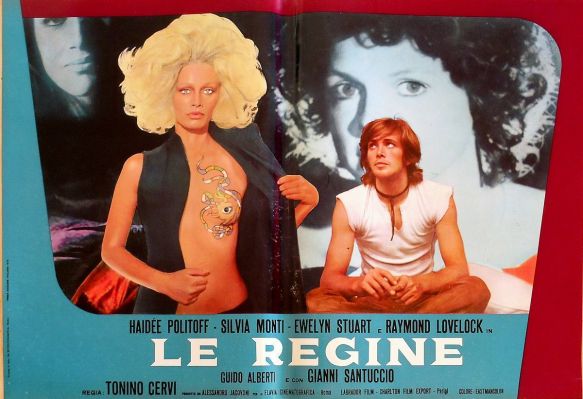 If Queens of Evil has a discernible flaw it is the conception of the main protagonist. On first impressions, David is likable enough but it soon becomes apparent he is about as perceptive as a fencepost and so slow in recognizing impending signs of danger that he makes the perfect victim. Perhaps it was the intention of screenwriters Raoul Katz, Antonio Troiso and director Cervi to make David a foolish and unsympathetic representation of hippie culture (it is based on a story by Benedetto Beneditti). Accepting that as the original intention, there is certainly some macabre humor to be had as we watch the sisters ensnare David in their web. Still, the film and the gruesome finale would have had much more impact if the audience actually had any empathy for the young drifter. 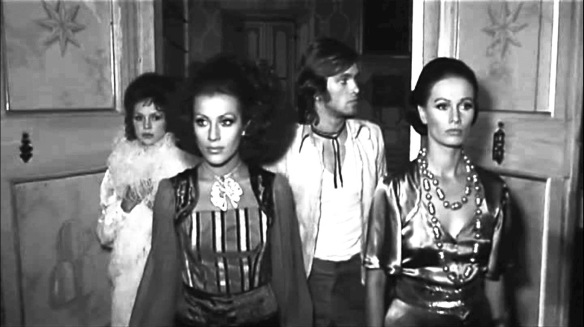 The three sisters and their house guest (Ray Lovelock) attend a strange party at a nearby castle in Queens of Evil (1970), directed by Tonino Cervi.

That said, the casting of Ray Locklove as the hapless David is more than adequate. He has a bland handsomeness comparable to Edward Albert (Butterflies Are Free) or Richard Thomas (John-Boy on the TV series The Waltons) but conveys the right mixture of naivety and cluelessness in his interactions with everyone he meets (he also performs the main theme over the opening credits). Much more compelling are the three sirens, each of whom exhibit distinctly different personalities from each other. 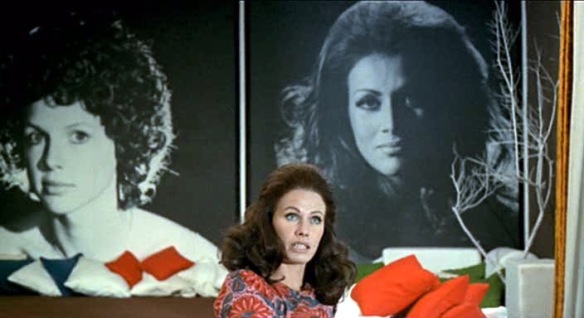 Ida Galli (aka Ewelyn Stewart) plays the enigmatic Bibiana in Queens of Evil (1970).

Ida Galli as Bibiana is easily the spookiest and most inscrutable. My favorite scene is when David encounters her at a table with a bowl of animal guts and some limp, furry bodies. “Those are embalming fluids,” she says matter-of-factly as David eyes her taxidermy tools. “This is my favorite hobby. I adore embalming animals. It’s like stopping….stopping time. Youth. Beauty. Forever. Don’t you find it fascinating?”

The Spanish film poster for the 1972 horror thriller Maniac Mansion, one of Evelyn Stewart’s many Italian genre films.

Most American viewers who are well versed in cult cinema and international genre films know Galli as Evelyn Stewart, an Italian actress who has appeared in numerous giallos (The Sweet Body of Deborah, The Bloodstained Butterfly), spaghetti westerns (Adios Gringo, The Unholy Four) and poliziotteschi melodramas (Syndicate Sadists, Napoli Spara!).

The more overtly seductive and provocative of the three sisters is Silvia Monti as Samantha. First she taunts David by stealing his motorcycle and then she lures him into the lake for a swim and frustrates his every advance until he is in a state of total confusion. The hunter is finally captured by the game in a discreet sex-on-the-beach scene but we realize Samantha has orchestrated the entire scenario.

A swim in the lake ends in seduction in Queens of Evil (1970), starring Silvia Monti & Ray Lovelock.

Haydee Politoff stars as Liv in Queens of Evil (1970).

Queens of Evil has not been available in the U.S. since its initial release although European Trash Cinema offers a fine looking, English dubbed DVD-R of the film. As of March 2021, the film is finally available on Blu-Ray from Mondo Macabro, which presents the film in the appropriate widescreen format with options for either the English or Italian language versions. The disc also includes audio commentary by Kat Ellinger and Samm Deighan, alternative sequences from the film, and an archival interview with Ray Lovelock, still looking great in his twilight years and sharing fun stories about his career and the immense popularity of Queens of Evil and Plagio (1969) in Japan. The latter was an oddball menage a trois romance/drama that is still difficult to see in an English-subtitled version.

One of the memorable images from Tonino Cervi’s horror fantasy, Queens of Evil (1970, aka La regine).