Vittorio Gassman as the overly ambitious Guido in Il Successo (1963)

“The worst poverty is not wanting to be rich!”

Something is gnawing at Guido. It’s the feeling that life is passing him by and he will never be anything but average which, to him, is the same as being a nobody. We’ve all known someone like Guido whose desire to be rich, famous and envied by all becomes his all-consuming obsession. Is it because his parents were peasants? Despite that, he still went to college, has a steady, respectable job at a major real estate firm and is married to Laura, a beautiful, talented woman who is on the fast track to success at a public relations firm with high end clients. So what’s the problem? 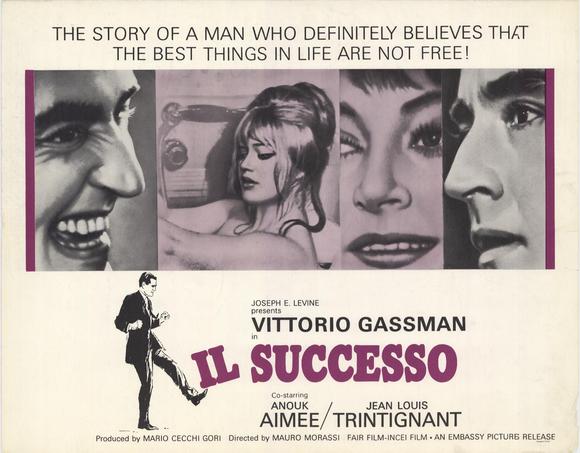 Il Successo, directed by Mauro Morassi, is a tragicomedy that critiques the dangers and ultimate emptiness of unbridled ambition. It’s a morality tale that’s been told many times before in all walks of life from Kirk Douglas’s ruthless boxer in Champion to Laurence Harvey’s scheming careerist in Room at the Top to Charlie Sheen’s easily tempted stockbroker in Wall Street. What keeps the film fresh and engaging is Vittorio Gassman’s charismatic but slippery protagonist.

At first Guido is causally charming with an amusingly cynical wit but after he celebrates his 38th birthday his unhappiness escalates. When he receives inside information from his firm that a large tract of land is going to be developed, he becomes a relentless schemer, exploiting his family, friends, former classmates and even his wife for investment money to buy the adjoining property.

Annie Gorassini and Vittorio Gassman in a scene from Il Successo (1963), directed by Mauro Morassi

In some ways, Il Successo is a kindred spirit with Dino Risi’s highly praised Il Sorpasso (1962) in which Gassman plays an irresponsible, carefree playboy who exposes a shy law student (Jean-Louis Trintignant) to the joys of hedonism during a road trip. Gassman and Trintignant are again paired in Il Successo with the latter playing Guido’s faithful, trusting friend who is content with his unexciting job at a pharmaceutical company. Allegedly Dino Risi also co-directed some of Il Successo though he is uncredited.

To be honest, Il Successo is not as exhilarating or as emotionally rich as Risi’s deceptively lighthearted Il Sorpasso (aka The Easy Life) but it proves once again that Gassman was one of the finest Italian actors of his generation. His ability to convincingly transition from merriment to wounded resentment, for example, or from self-deprecation to arrogant boasting is like watching a well-tuned sportscar go from zero to sixty in seconds. His performance feels natural and true to his character and never contrived or artificial. 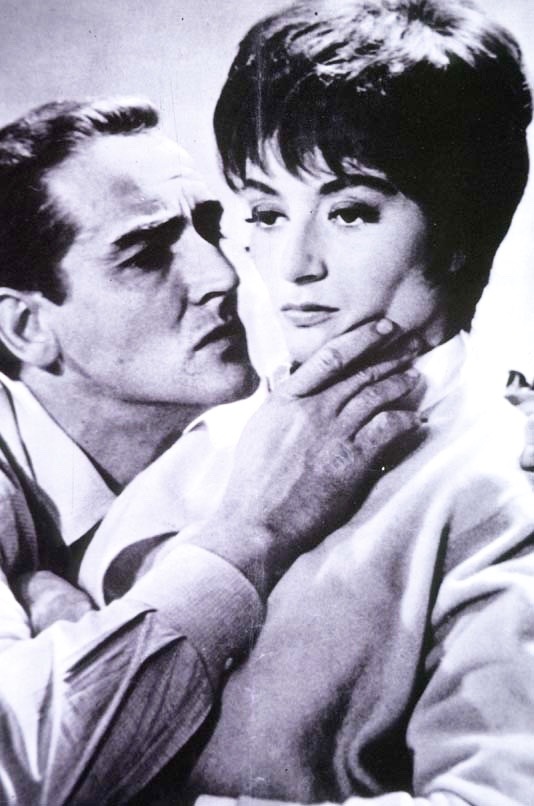 Take, for instance, the scene where Guido convinces his elderly father to sell his family home and farm so he can handle his finances and give the old man a better life. Or the scene where Guido revisits a former schoolmate and successful factory owner he previously insulted only to ask him for a loan without appearing to beg. Il Successo is particularly memorable for these cringe-worthy encounters where you anticipate the worse possible outcomes and the underlying tension is maintained right up to the ironic twist ending.

The film also serves as an appealing showcase for the elegant and graceful Anouk Aimee as Guido’s patient wife, Trintignant as his unpretentious friend and Cristina Gaioni as a self-absorbed maid. And Riccardo Garrone, Umberto D’Orsi and Leopoldo Trieste stand out in vivid supporting roles. Ennis Morricone provides an unobtrusive but upbeat music score that includes Italian pop songs like Gino Paoli’s “Sapore di Sale” and Rita Pavone’s Come the “non c’e nessuno.” In addition, the stylish black and white cinematography is by Alessandro D’Eva who has worked numerous times with Dino Risi on such films as The Tiger and the Pussycat (1967), Mr. Kinky aka The Prophet (1968) and In the Name of the Italian People (1971) – all of which starred Vittorio Gassman.

Director Mauro Morassi, however, is a rather obscure figure in Italian cinema. He began as an assistant director and only helmed four features before dying in 1966 at the age of 41. Il Successo was his final directorial effort.

Il Successo is a mostly forgotten film today but it is worth seeking out for fans of Gassman and Italian cinema. If you have an all-region DVD player, you can probably find a Region 2 DVD of it on Amazon.