Buster Keaton in the two-reeler The Blacksmith (1922)

Often ranked by silent film historians as one of Buster Keaton’s lesser efforts when compared to his other two-reel shorts such as One Week (1920) or Cops (1922), The Blacksmith (1922) is now enjoying a major critical reassessment because of a remarkable turn of events. Film collector Fernando Peña who, in 2008, uncovered the original, uncut version of Fritz Lang’s Metropolis (1927) in the archives of the Museo del Cine in Argentina, discovered a remarkably different version of The Blacksmith that same year through fellow collector Fabio Manes who purchased a 9.5mm print of it online. Released by the Pathé company in France in 1922 with French intertitles, this previously undiscovered version includes missing material totaling more than four minutes of sight gags, settings, and characters not featured in what was considered the original American version of The Blacksmith. 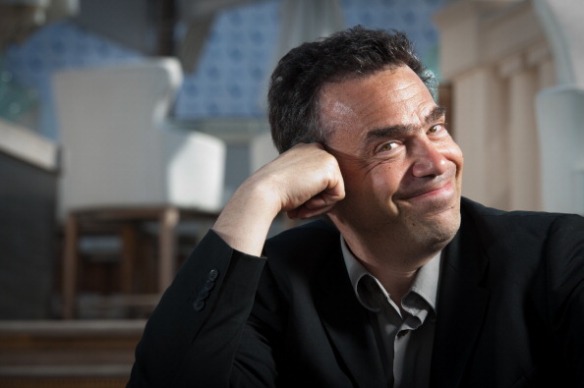 Peña reported his find to French film archivist Serge Bromberg, who decided to restore the Pathé print of The Blacksmith through his company Lobster Films. During his restoration research, Bromberg discovered that a 35mm print of the short he had previously deposited in France’s CNC (Centre national du cinéma et de l’image animée) included another additional minute of footage not seen in years. As a result, the new restoration of The Blacksmith constitutes a major rediscovery (It was a highlight of the 2014 San Francisco Silent Film Festival). What was once considered a string of amusing but stand alone vignettes now has a fluid storyline with richer character development and a more plausible resolution to a romantic subplot that, in the American version, seemed like a hasty last-minute addition. 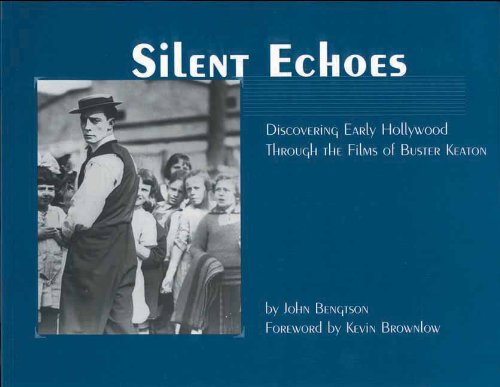 Why two different versions of The Blacksmith exist is a mystery that still hasn’t been completely solved. Various sources have speculated that Keaton decided to shoot new scenes and revise it for general release after unfavorable reactions to early screenings. Film historian and author John Bengston has conducted several scene by-scene comparisons of the two versions and tried to pinpoint the exact dates of production, which range between September 1921 (when the film was first reported as being completed) to July 1922, when it went into general release. His unraveling of the film’s erratic production history is fascinating and confirms that actor James Mason discovered the pre-release version in 1952. Mason had purchased Keaton’s former home and found several films in a private vault, many of them 35mm nitrate prints in a decomposing state. He donated them to the Academy of Motion Picture Arts and Sciences in 1956, and Raymond Rohauer secured the distribution rights to these films. Bengston suspects that Keaton’s revised 1922 version was the one that was intended for general release but was lost over time and didn’t resurface until Peña’s recent discovery.

The 14th of the 19 two-reelers Keaton made in the early 1920s that were produced by Joseph M. Schenck, The Blacksmith depicts a day in the life of a small town blacksmith’s assistant (Keaton) at a time when that occupation also entailed equipment and automobile repairs. What begins as a satire of the first stanza of the poem “The Village Blacksmith” by Henry Wadsworth Longfellow quickly escalates into a series of gags in which Keaton’s bumbling hero makes a mess out of almost everything he touches. Yet, in classic underdog fashion, his ingenuity and perseverance save the day in the end.

Keaton’s comic timing and pacing in The Blacksmith has the precision of a beautifully crafted Swiss watch. But beyond the synchronized mechanics of the acrobatic stunts and sight gags is an affectionate portrait of small town life with a wry awareness of class differences. There are also unexpected touches of surrealism such as Keaton’s porkpie-like hat doing a double take and flipping in the air in reaction to his boss’s unexpected return from jail or a child’s balloon being used to hold up the frame of a model-T under repair. 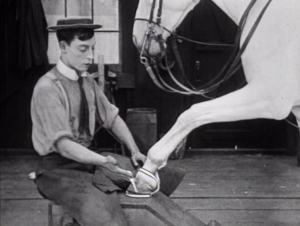 A new customer tries on a shoe for size in The Blacksmith (1922), a comedy short starring Buster Keaton

One sequence that displays Keaton’s well known affinity for animals is a delightful pantomime of a shoe-store clerk’s ritual of offering the latest fashions to a customer who, in this case, happens to be a white mare (the same horse, incidentally, that Keaton used in Cops, Three Ages, and Our Hospitality). More elaborate and detailed in execution is the almost gleefully anarchic destruction of a pristine Rolls-Royce brought into the shop for a very minor fix. The humor lies in watching Keaton’s completely illogical approach to prioritizing work flow and its consequences; instead of making a quick, easy repair to the Rolls whose owner expects a quick turnaround, he throws himself into rebuilding a broken down Model-T next to it with such myopic compulsiveness that he doesn’t even notice his systematic trashing of the more expensive, luxury car. Audiences at the time, many of whom couldn’t even afford a Model-T, reputedly sat aghast that someone would wreck a Rolls-Royce for a gag. (There has been speculation that the destroyed car was a wedding present from Keaton’s in-laws).

Buster Keaton attempts to rebuild a model-T wreck and destroys a Rolls-Royce in the process in The Blacksmith (1922).

The newly restored and expanded version of The Blacksmith includes all the previously mentioned sequences from the American version, although some shots have been replaced with alternates made the following year. It is even funnier with the addition of the newly added sequences. Joe Roberts, who appeared as Keaton’s nemesis in many shorts, becomes more central to the plot of The Blacksmith and his comic ferociousness reaches operatic proportions here with Keaton inciting him to further violence by accidentally running him down in a car.

Buster Keaton and Joe Roberts in the 1922 two-reeler comedy, The Blacksmith

The romantic attraction between Keaton and Virginia Fox (as the posh, upper-class owner of the white mare) is also developed more fully and introduces Fox’s father as a potential obstacle to their match. Keaton’s intentions toward Fox are also more explicit as he attempts to propose to her several times while being chased around a hut by his irate boss. Other delightful but previously unseen gags include Keaton attempting to commandeer a roadster which turns out to be an advertising prop and a sequence in which Roberts’s pursuit of Keaton comes to a brief halt as both men are distracted by the silhouette of a woman undressing behind a window shade. 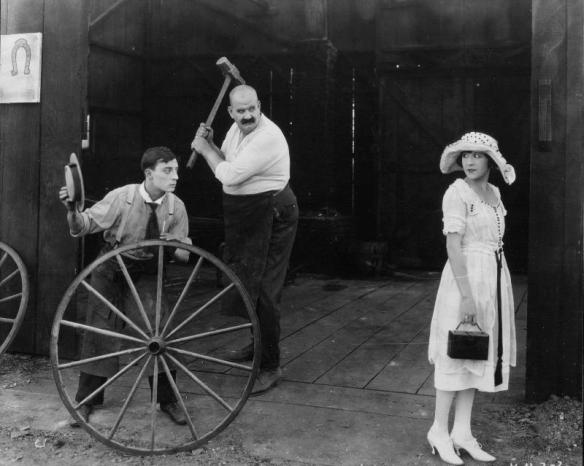 Buster Keaton, his irate boss Joe Roberts and his future fiancee Virginia Fox in The Blacksmith (1922)

The Blacksmith was not well received by American critics nor was it a popular success during its initial release. A review in Photoplay Magazine from January 1922 stated, “It’s a sad day when one of our comedians fails us. Buster Keaton is guilty this month. There is hardly a smile in his latest comedy, if such it can be called. The situations are forced and his work laborious.” Even Keaton dismissed The Blacksmith as “that dud.” But often an artist is not the best judge of his own work and Lobster Films’ restoration of The Blacksmith should help place this once underrated film among the ranks of Keaton’s better silent shorts.

Virginia Fox (who became the wife of Fox mogul Darryl F. Zanuck) and Buster Keaton in The Blacksmith (1922)

Other Links of Interest: